The Expanse: Holden Takes Quite A Trip In ‘Dandelion Sky’ – Review

Sometimes it’s useful to be reminded that those of us who love good sci-fi, love it for more than cool ships, daring adventures and battles in the far reaches of space. Sometimes, good sci-fi is a revealing conversation in the bowel’s of what feels like an impossible situation amidst an otherwordly backdrop. And that’s what we got to enjoy in EP. 310 of The Expanse, “Dandelion Sky.” The protomolecule Miller escorted Holden into the bowels of the nucleus within The Ring for a specific purpose.

And while the purpose was quite something to behold, and still somewhat mysterious, the discussion they engaged in while making their way to that moment was an enjoyable stroll encompassing fear, friendship, love, uncertainty and the search for answers where none appeared imminent.

Sure, there were interesting things going on within this episode, yet I couldn’t help but be fascinated by Miller and Holden exchanging questions and answers — some of which were obtuse, yet answers they were. When, in the heart of the nucleus, Miller disappeared, then reappeared with a little more humanity in his protomolecule-infused soul, it was a moment of honesty and clarity that Holden has been searching for from his old friend since the two “reconnected.” I really enjoyed it — a ton. It was subtle, nuanced, and intense while being engaging on an emotional level. 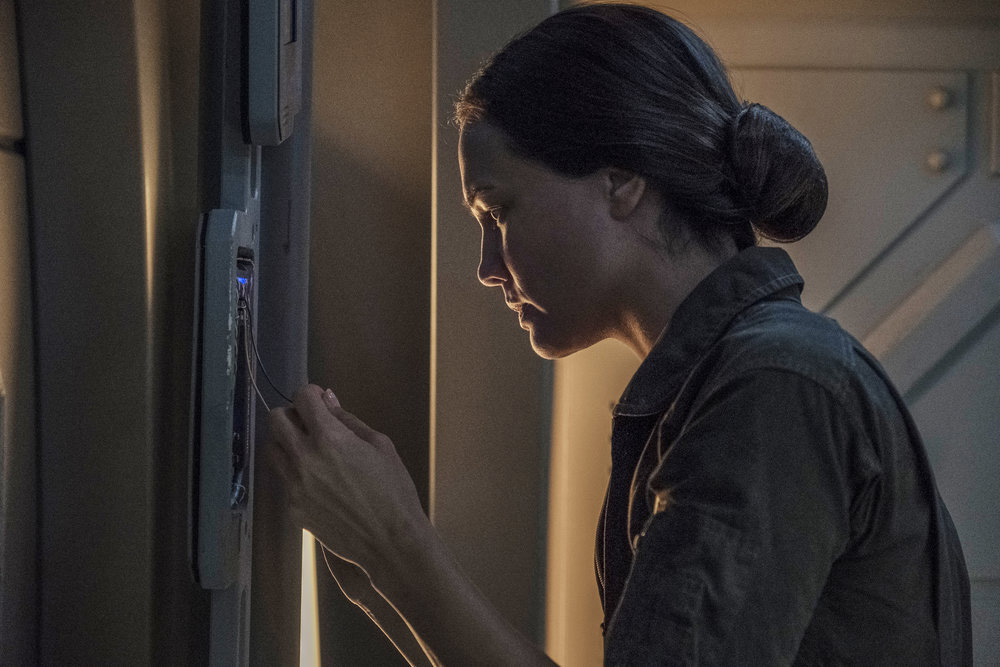 The work of Steven Straight and Thomas Jane in that little arc cemented my feelings that this is a show people will point to when noting that sci-fi has “grown up.” Stellar work by all involved.

Of course, it set up quite a little confrontation with the Martians who decided to drop in, didn’t it? Wow, the whole protomolecule habit of “taking you apart piece by piece in an ordered and organized way” continues to be fascinating to see. I’m sure the Martian lieutenant who was the victim of said protomolecule habit wasn’t amused, but that’s how it goes when you don’t respect the unknown. So, what did Holden bear witness to when he connected the circuit within the nucleus with his hand?

It seemed like a portal to many other worlds, including the one that would seem likely to be that which the protomolecule originated in. But that’s just speculation based on watching the scene several times. Seemed like the round openings pointed to other universes, but I’m sure we’ll have that explained as we move on.

What strikes me as interesting is the strength and honor that Holden continues to display even as he continually gets knocked around physically and emotionally. The guy has to be coming apart at the seams a little bit, yet continues to follow a moral compass that, while unsteady at times, directs him down intriguing paths. As Miller notes before they enter the nucleus, “You’re just following your programming, just like me.” Then adds, “You’re the patron saint of lost causes, kid.” 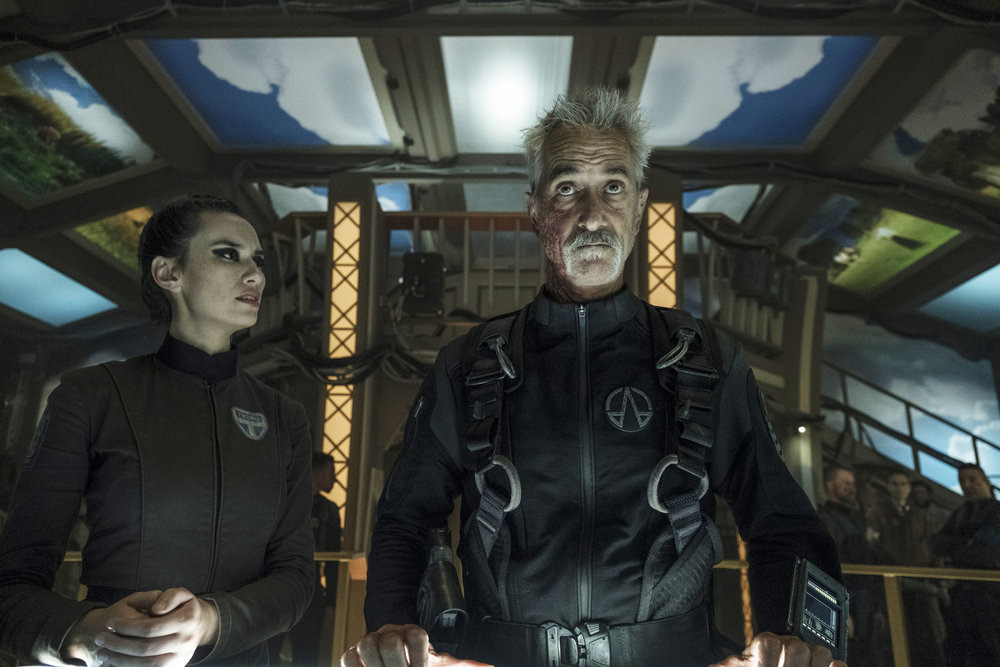 As we enter the final phase of The Expanse’s third season, there seems little doubt that those two observations by protomolecule Miller are spot-on for our Captain Holden. It’s a quality that has me wondering out loud if “this guy can’t catch a break,” but also a quality that endears this character to us all, I think. In many ways, we can identify with the concept of getting knocked down and getting back up while trying to do what’s right – even while many around us aren’t. It’s our programming, correct?

Again,the work of Strait and Jane is so on-point in this episode, another episode that moves at a slower pace. I don’t mind that because even though the pace is slow, the stories are being moved along nicely and in a way we can keep track of. Seems as though all the stories in play right now are funneling toward Holden, Miller and that nucleus. Good to see Bobbie Draper again with her comrades. Unfortunately, her commanding offer was the guy parted out when he fired on Holden. Interesting that in The Ring, the ability to change inertia is such a big part of the equation. Going fast is, once again, a bad thing in The Ring.

Also catching my eye in Ep. 310 was the continued dance Drummer and Klaes Ashford are doing aboard the Behemoth. The two have yet more disagreements, this time about Drummer allowing Naomi to head back to the Rocinante rather than stay aboard and help with engineering duties. Drummer cites friendship, Ashford talks duty and the two obviously aren’t on the same page. It’s very interesting to me that afterward, when Diogo approaches Ashford about him being the “boss man” of the ship, Ashford shuts that talk down. At that point you think that maybe, just maybe, Ashford has this thing in the right perspective and that despite the disagreements with Drummer, it’ll all work out. 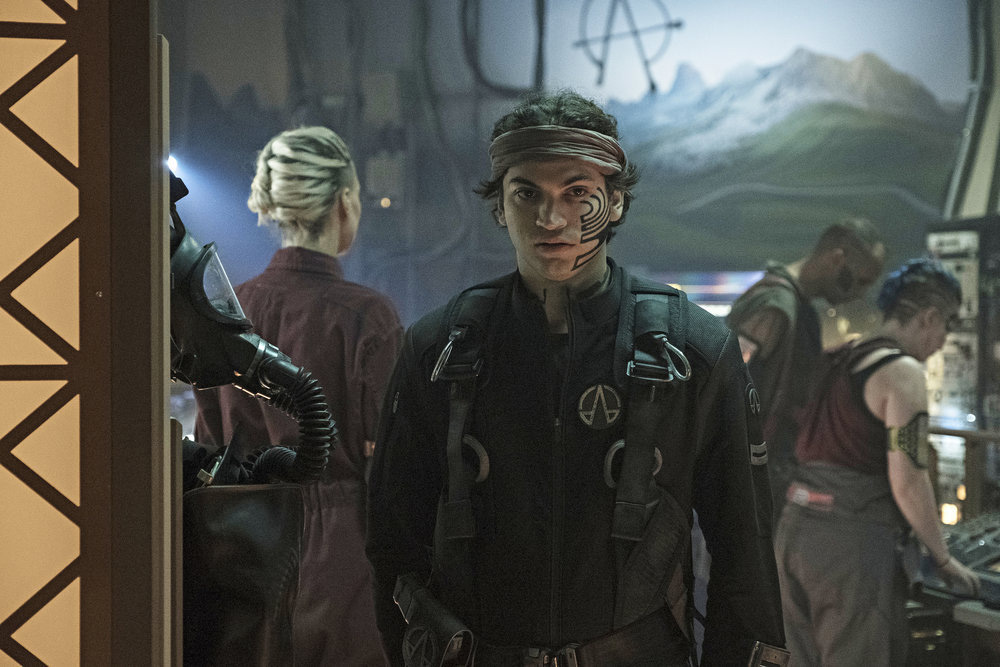 Later, though, it’s Drummer who kind of refocuses the whole incident and just how in tune her intuition is about the Ashford’s motives. She notes that Ashford “Just can’t stop giving me advice, can you?” and that his disagreement in front of the bridge crew was done in a calculating manner — “You did what you meant. You put it in everyone’s head.” And the truth is, in retrospect, you can see it playing out exactly as she describes to Ashford. It’s clear any smoke he’s blowing isn’t clouding her view of the situation as a whole.

Again, Cara Gee’s work as Ashford is wonderfully nuanced and edgy. A woman carrying the weight of past experiences and disappointments, yet still focused on “the cause.” She and David Strathairn have a very nice chemistry together. I look forward to their scenes together with unbridled joy. What else can a viewer ask for?

Ashford’s subtle digs and opportune arguments with Drummer are far more calculated than they first appear — and Drummer clearly sees it. I think this becomes a bigger deal now that Naomi has gone. She was a strong and certainly formidable ally for Drummer. Now, she’s the captain of a boat that may have a challenger for her seat awaiting his opportunity. How this plays out, and what is the turning point that ignites it, should be very intriguing moving forward? 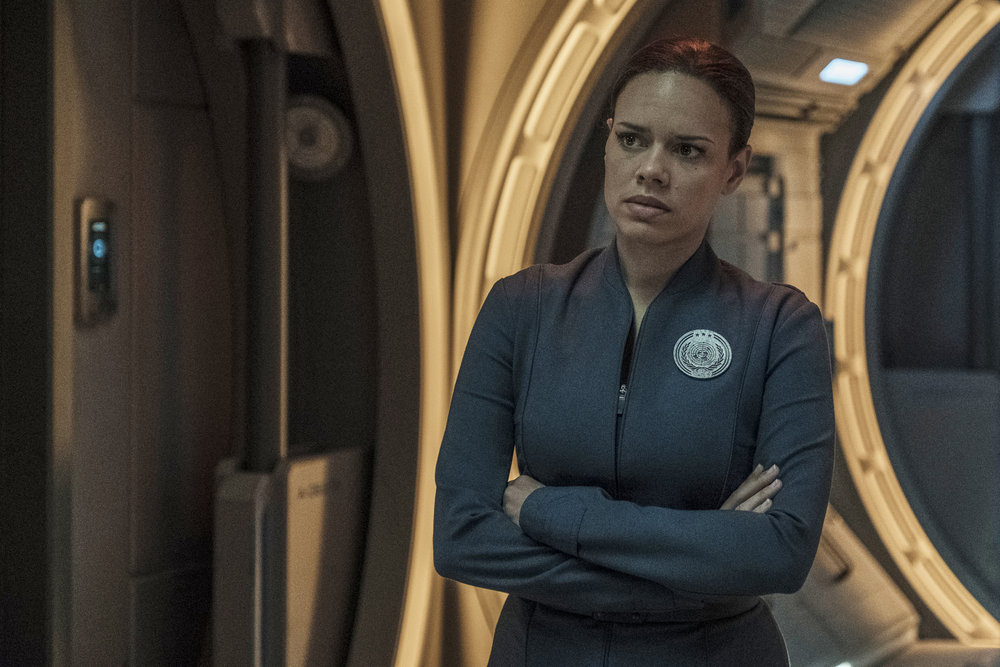 Let’s see, Melba continues on her path of Holden destruction as the “crazy” in her continues to build. She’s recognized by someone who used to run in her social circle, so I’m thinking some more death is coming to Tilly. And speaking of Tilly, she and Anna have forged a little friendship as the UNN ship makes it through The Ring to make it a full house inside. Mars, Earth, The Belt, and Rocinante are all in The Ring now, so that should make for some friendly conversation and afternoon tea, shouldn’t it?

Naomi is still on her way toward the Rocinante even as the Martians threaten her and it all seems to be heading toward some sort of showdown inside The Ring, which I believe is a living entity of some kind. But we’ll get some clarity on that later, I suppose. And just as an aside, I’m begging for something meaty for Chrisjen Avasarala to do in the season’s final weeks. It’s not for me, you understand, but for all those folks out there that understand she’s that “something special.”

It's hard not to get excited about the return of The Expanse, even as we realize that this is the final season - a season that will giv...

END_OF_DOCUMENT_TOKEN_TO_BE_REPLACED

Resident Alien: Menace, Confusion and Fun In A Land of Aliens – Review, Ep. 101

There are myriad "fish out of water" tropes running around in the land of TV and movies - some good, some not so good - but that intere...

END_OF_DOCUMENT_TOKEN_TO_BE_REPLACED

The Expanse has always been an involved, somewhat dark series, one that probes not only the human condition, but the potential for huma...

END_OF_DOCUMENT_TOKEN_TO_BE_REPLACED

Vagrant Queen: Finale Says Goodbye To One Foe. Hello To Another? – Review, Ep. 110

After 10 episodes of Vagrant Queen, the concepts of family, trust and redemption have been fairly well implanted into the DNA of this s...

END_OF_DOCUMENT_TOKEN_TO_BE_REPLACED

At long last we come to it, the two-part finish to the inaugural season of Vagrant Queen begins with Episode 109, "All Old Things Must ...

END_OF_DOCUMENT_TOKEN_TO_BE_REPLACED

From time to time in a series you get an episode that confuses the viewer about what it's purpose might be. And, on cursory inspection,...

END_OF_DOCUMENT_TOKEN_TO_BE_REPLACED

I've seen a lot of fight scenes that I enjoyed - some bloody, some funny and some that didn't quite hit the mark. Fortunately, episode ...

END_OF_DOCUMENT_TOKEN_TO_BE_REPLACED

I'm torn about what I witnessed in this episode of Vagrant Queen. I mean, there were not a lot of positive and glowing moments in this ...

END_OF_DOCUMENT_TOKEN_TO_BE_REPLACED

It's hard not to like the sound of Adriyan Rae's voice. There's a gentle friendliness to it that invites you in and makes you instantly...

END_OF_DOCUMENT_TOKEN_TO_BE_REPLACED

At long last, our heroes have landed (with a thud) on the planet that Elida's mom is supposedly being held captive on. Ah, but getting ...

END_OF_DOCUMENT_TOKEN_TO_BE_REPLACED

The rescue plan of Elida's mother hits full throttle as the target planet is Wix. It's here that mom is being held (Or at least that's ...

END_OF_DOCUMENT_TOKEN_TO_BE_REPLACED

For my money, it's hard not to like the vibe that a new SYFY offering delivers in a fun, outer space, coming-of-age kind of way. Vagran...