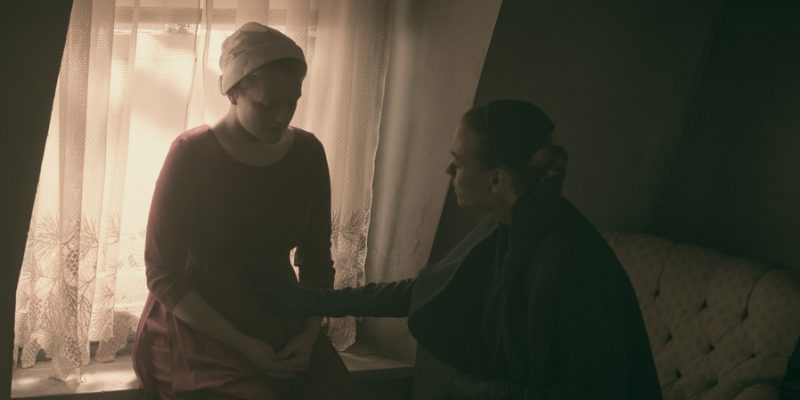 This week’s episode of The Handmaid’s Tale left me hopeful, The atmosphere of bleakness, hushed voices and quiet desperation made for an hour where there was so much hanging in the balance. I feel like this was a building block episode, filled with little gems that will either leave the viewer very satisfied or frustrated. The cancer that grows upon this show is Gilead and such an impossible society. All things save mushrooms do not grow in the dark and Gilead is a world surrounded with so much blackness and shadows, secrets and lies, it’s amazing that anyone or anything can breathe. 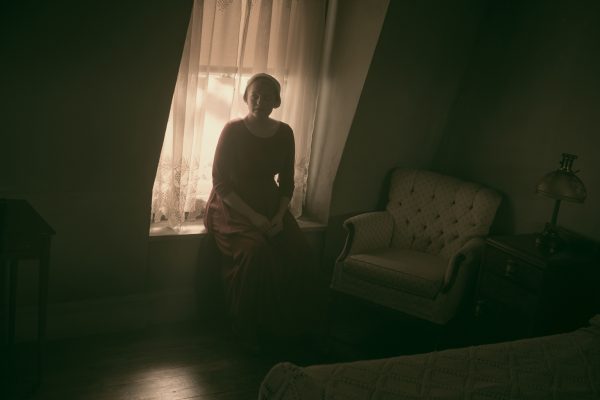 The House of Waterford

June’s description of the Waterford residence and its pluses and minuses is a savvy analogy of the Gilead society. From room to room, on the outside things appear to be immaculate, ordered and posessing a faded charm. The irony that she describes the place in a room that appears airless with limited light, comfort or personal effects makes it all so joyless. But then again, there is no joy in this house right now. “I am a woman of reduced circumstances” speaks loudly about the condition of womankind in Gilead. What was intended on elevating women to their “natural calling” to be mothers has become an abomination of personal freedom, liberty and choice. And no one is experiencing this in tragic fashion quite like Serena. Humbled, degraded and chastened by last week’s beating, she is hardly a “strong Gilead mother” at this point, choosing her words carefully. 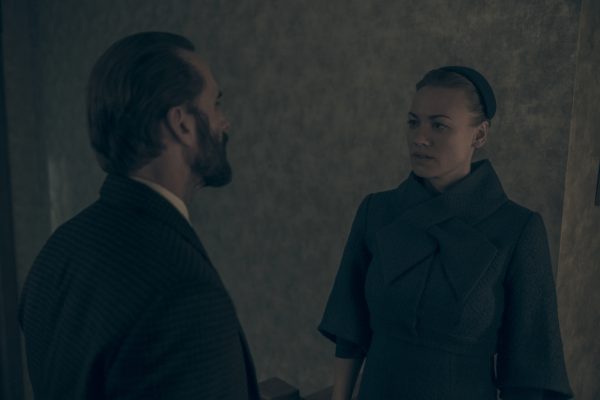 Everything that is corrupt will eventually die, but first, the rot will set in. Serena’s garden in her greenhouse is infested with mold, indicating the societal sickness and heartsickness that this house possesses. Even the growth of the alliance of June and Serena is broken, with Serena declaring, “I think we’ve all had enough of each other.” Typical of Serena not to look at her own hunger for power and prestige. She is being relegated as arm candy on Fred’s trip to Montreal. When once she was the speech giver, the firebrand, now she is the rose on Fred’s lapel and it frankly stinks. Serena’s dreams and ideals as to Gilead society are decaying, and what with Fred’s sterile state and the warmth gone in her new bond with June, the very air they breathe feels toxic. 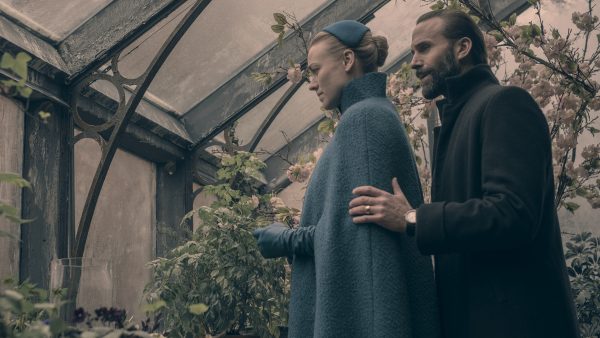 The True North Strong and Free

I am quite thrilled that Canada is presented as a sane state, full of freedom and acceptance. It has been a sanctuary for Luke and Moira. Seeing Fred arrive in Montreal has a galvanizing effect on both Luke and Moira. It is refreshing to see Luke’s anger return, especially in conversation with an activist. When it is revealed that there has been silence by the government about atrociities in Gilead, the grassroots take to the streets in a display of rage and shame. How must Fred and Serena feel being treated as criminals and traitors of human rights? The Canadian response is a shock to the system. Fred appears unaffected, but Serena is more shaken. It was fabulously acted by Yvonne Strahovski to watch her observe a normal city, with couples kissing and women working in downtown office towers. Is it anger or wistfulness she feels? Serena always plays her feelings close to the vest. Her duties are cultural and floral activities. The orchids are thriving in these greenhouses and her dreams of being in the rooms, discussing policy die on the vine. 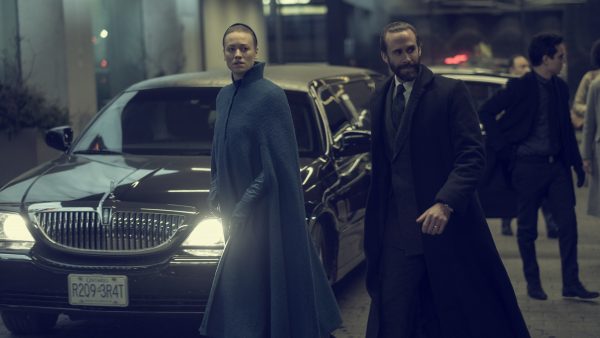 Thriving in the State of Adversity

And what does become of a handmaid once she has delivered the precious babe? For June, it will be a swift exit from the Waterford house, but where will she go? Denied yet again another chance to hold her child, to nurture the baby, her mood becomes desolate. Chatting with Janine, she hints that Janine will soon be separated from her child once the Putnams feel the girl has been weaned. The harshness of this leads Janine to an outburst, ending with her yelling “Suck my dick” to a security guard that is on their tail. The violence that follows is sad and sickening and has June escorted home. No blows land on her because of the pregnancy, but the disposable nature of a handmaid’s existence is laid out. What does become of us, once the blessed fruit is harvested? More labour for the colonies or yet another batch of seed to be received?

And what does a “strong Gilead mother” do when faced with shunning? Being treated as “the other” in a true land of the free leads to a brief but powerful encounter with a strange man in the hotel bar. He offers her sanctuary, to be on a plane to Hawaii in an hour and escape all this Gilead madness. It is a breathless bit of cat and mouse, with Serena not knowing whether this a bona fide offer or a case of entrapment. Sipping her Riesling and even contemplating the idea of an escape is like walking a high wire. Is she willing to betray everything she has crafted and approved for an easy exit? I’m not sure, but I was cheering for her to step on that jet and hightail it out of her miserable existence.

And suddenly, I am loving Nick. From the mercurial, sad sack, Gilead puppet that he has been to a man who has taken a side and is willing to fight for it. The letters that Eden finds and gives to him before the trip have a power to reveal truths Gilead would best like to have buried and gone. But the voices of the women will not be silenced, whether on the street or on paper. The meeting betwween Nick and Luke is epic, with both truth and lies being told, but an alliance is forged in their mutual love for June. Nick’s denial that he is the father of June’s baby reduces the soapy testosterone level in the scene dramatically and he emerges a decent guy who will fight for his woman, even in the presence of her husband. I have no idea how this will play out, but as a viewer, I am intrigued and surprised. 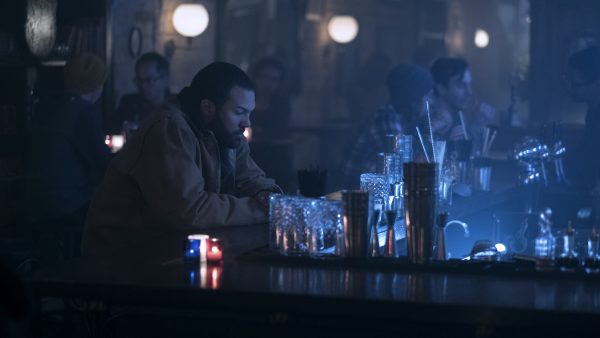 The letters find their way into the hands of the authorities and it’s bye bye to diplomatic relations with Gilead. The human rights abuses, murders and rapes are no longer dark whispers, but horrors brought into the sunlight, revealing the ugly soul of Gilead policies. Fred remains a true believer, intoning that “His Kingdom Endures Forever”, but with the rallying cry of “We believe the Women”, his bravado is on shaky ground at best. I have always felt that Fred embraced Gilead because he was the weaker half of the Waterford household.

With his visits to Jezebel’s and exceptionalism, he is not a righteous man, but one driven by power and the need to control.  Luke and Moira have their own moments challenging Fred, with Luke angrily accusing him of raping June and declaring he is her husband. Moira makes her presence known by scrawling in red her name on poster board, flashing it in front of the Waterford limousine. She will not be denied in this land where she can speak her mind. With many cheering as the Gilead detachment leaves Canadian air space, “this will go boom” is an apt description for the letters and the cold ideological war to come.

What becomes of Nick after he opens his heart to June, telling her of the letters, the meeting with Luke, and that he loves her. Is this a relationship triangle in the making, with Luke returning to claim his wife, or June somehow running off to Canada to be with her husband and best friend. The news that Moira is safe overjoys her, making the impossible possible again. Her next confidante is a revelation and a long-awaited bit of history to be told. Aunt Lydia comes to the house for an examination and the next conversation is incredible. 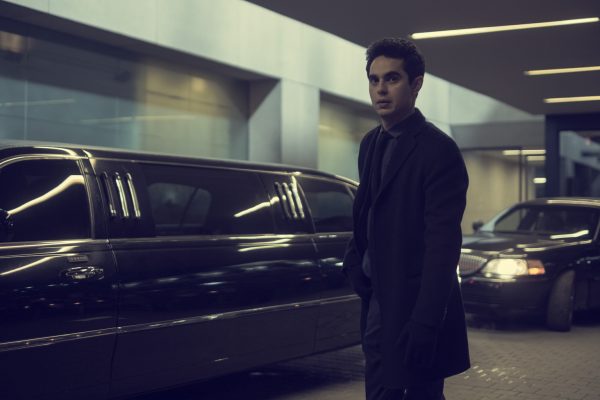 June asks Aunt Lydia to be the baby’s godmother, which leads to a story about her nephew and being his godmother. He died when he was four days old, and the loss of that child weighs still heavily on her soul. June states that “I want my baby to have kindness” during an earlier chat about what is to become of her after the baby is born. Amazingly, Aunt Lydia deals with Janine’s outburst as an over abundance of hormones, revealing a compassion only barely glimpsed. Lydia’s promises to be a good godmother to June’s baby leads to a change of heart in June. Having witnessed and experienced firsthand the brutality and emotional frigidity of the Waterford household, she wants better for her little one. June’s rebel spirit is back and with a final “fuck you”, the game is set. With Serena deeply dissatisfied and Fred a weak leader now in the Gilead Command, the house of Waterford is in for many changes. Can’t wait!