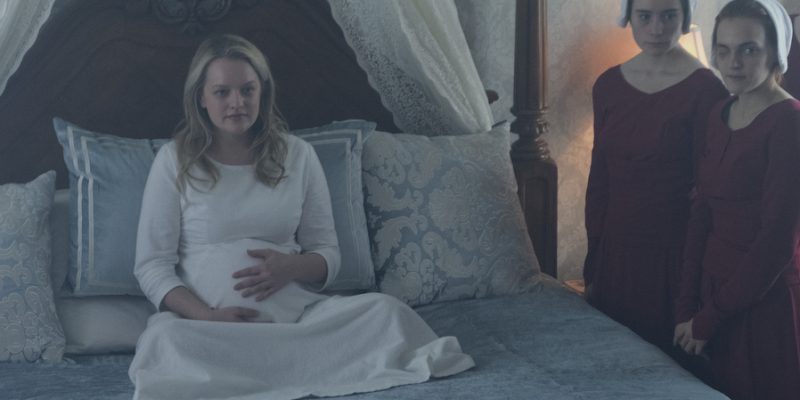 The Handmaid’s Tale 210 Review The Last Ceremony – Ripped Away

What a harrowing episode this was! Everywhere you looked, the state of Gilead and the residents we have come to know and love go through unspeakable trials and traumas. And all the while, I keep thinking of Frankenstein, that early gothic horror novel by Mary Shelley. It is commonly assessed that she wrote the book based on man’s womb envy, that the desire to create was so powerful within the basest of men’s wants that the furthest lengths would be travelled to achieve that goal. And what is Gilead but a society based on barren women, supposedly fertile men and the empty wombs waiting to be filled up with glorious seed. Except the whole enterprise is so monstrous that no manner of violence or abuse is too much to achieve this aim.

“You look at it like a job.” A bald statement uttered blandly. Only what is happening is anything but a workaday concern. Emily is so cut off, so dissociated from her body that through another rape by her Commander, she remains stolid. Her eyes betray her, seething with some far-off revenge fantasies that only shes knows. You have to admire her (and I do) when the Commander has a coronary while inside her, and Emily’s reponse is “Chances are better if I lay on my back afterwards.” Always thinking ahead she is, but when help is sent for, she gives the Commander a few kicks in retaliation for all the degradation she has endured. I continue to champion Emily, as she was the original firebrand. I worry about her fate now, but there are other child-empty homes waiting for a precious babe. 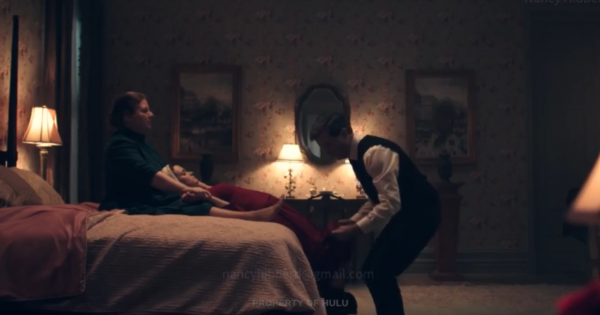 As I have stated before, nothing grows in the house of Waterford. The grand mansion that was presented in Season One has become a twisted vine-covered monstrosity and a forbidding residence. And the happy day is upon us! The ludicrous nature of the birthing ceremony is a state of mass delusion on the part of the wives. These privileged ladies gather in their sacred circle, intoning all manner of soothing words to the flush new mother, rubbing her feet and coaxing breathing and relaxation. Their humanity is saved only for members of their elite bastion, while the bloody work of actual birth is going on down the hall. 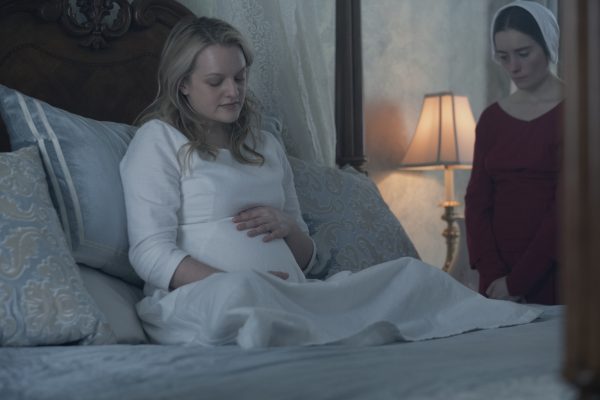 Only Mother Nature has other ideas, and she can be a bitch some times! The spectre of false labour falls hard into this “happy home”, and with June propped up like a beautiful madonna on the Waterford bed, resplendant in white. Serena’s anger permeates this room like a coiled viper, ready to launch at June for not fulfilling her part of the deal. June appearing like the cat who swallowed the canary inflames Serena’s anger, who hardly looks like a good candidate for future Mother of the Year! June’s words at the beginning of this ceremony will come back to haunt her. “At least this is the last time I’ll have to get into this fucking bed.” Don’t mess with Mother Nature and fate, June. 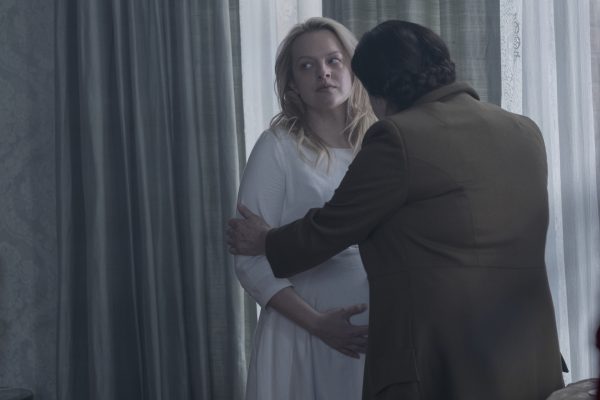 And what do we make of Fred? He is a man not to be trusted, his empty rhetoric and duplicitous nature display untold tales of corruption and hunger for power.  Seemingly the proud papa, handing out cigars and making merry, there is something bloodless about his nature. Behind his kindnesses is nothing but self`serving platitudes and cruelty. In the aftermath of false labour, June requests that she be moved to the district where Hannah is, begging, pleading, imploriing him that she would never approach her child, or even let Hannah see her. The cold refusal, the taunting that too much leniency has been shown to her shows Fred to be a master of mind-fucking and vengeance. Payback’s a bitch and Fred never hesitates to flex his power. What kind of father would he be to a child, what kind of punishments would await a babe in this household? Dismissing June with pitiless arrogrance, he’s King of the World again. 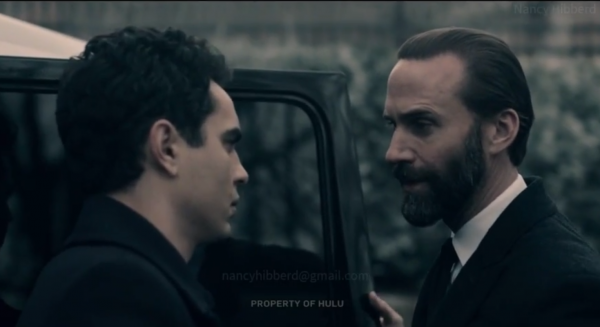 Every trip to the greenhouse leaves a more toxic trail in its wake. The expectant parents concoct a plan of “inducing” June “the natural way”. With a prelude to the horrors to follow, June is cradling her belly, telling the child, “Listen to my voice, this is your mother. I love you and I always will”. It takes on a valiant effort to maintain a measure of love and peace around her. But the Waterfords have other plans. June does return to that fucking bed again, and the rape that follows is savage, obscene, pornographic and blasphemous in the extreme. How indeed can a “Christian man and wife” utter scripture in the middle of such violence is baffling and psychotic.  “You treat it like a job” echoes all around, with June dissociating iin a similar fashion to Emily. And yet still the “natural way” proves ineffective, Fred and Serena’s attempts yielding no fruit, no divine blossom emerging from June’s womb. I guess God had other plans, too!

Eden, Eden, you are a little girl in matters of the heart, the flesh and the marriage you’re in. How could she be sold on the idea that Nick was in love with her when they didn’t know each other when they wed. Being the perfect little Gilead wife has offered very little in terms of actual love and affection. You don’t know the man who is your husband. Her repeated attempts at domestic bliss have been spurned and given a cold shoulder, so when a warmer one presents itself, she is lost in the mist of physical contact. Even being caught and practically prostrating herself in front of Nick offers nothing, no spiritual or emotional satisfaction. There’s an old saying that you can’t make someone jealous who doesn’t give a shit about you. The bloom is off the rose, died on the vine and the petals scattered to the winds!

Master of the Mind Control Universe

So here’s a theory. Fred is responsible for leaving June stranded at the mansion, having Nick shot and abducted, and bringing June her greatest happiness, only to have Hannah ripped away from her after only ten minutes in each other’s company. Who else knew where the house was, who was there, and what was happening at that house? Fred has struck me as a man who far more enjoys the supplicant sex, the trips to Jezebel’s, the fondling of pregnant bellies and the giving and taking away of treats and favours than the reality of impending fatherhood. There is nothing paternal about him, To leave June with no means to return to safety, to let the child she bears suffer the same cruelties and dangers is sick and malevolent. It wouldn’t surprise me in the least if he is responsible for this latest act of aggression. The impotence that his rape of June did not “produce” the child bore fruit to a plan of devastating consequences. 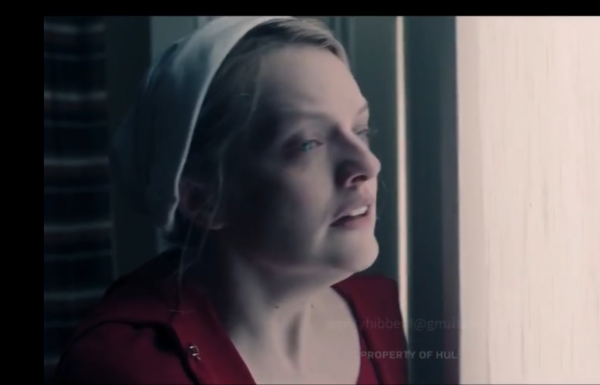 Seeing June with Hannah broke my heart. June proves herself to be the best mother this girl could ever hope for, thinking of Hannah and her safety, and reassuring the girl as many times as she can that she is loved, always will be loved and that she will always remain in June’s heart. From shyness and distrust to full-on embrace, Hannah comes to know a mother’s love and that little girl won me over with her bravery and sweetness. 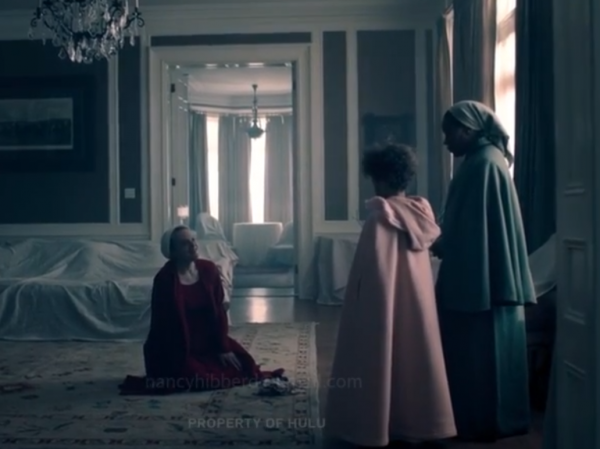 In these times, it is difficult not to make the association with what is happening to mothers and their children, and the children that are being ripped from their parents’ arms and held in cages in America. The devastation and damage could alter society forever afterward. How healthy and sound will the future children of Gilead be, especially girls. And what will become of June? Stranded in a forest with no help around for miles, how can she find safety? Who is looking after her? The answers will be fascinating and next week’s journey grueling. And the house of Waterford bleeding mold, rot and evil. 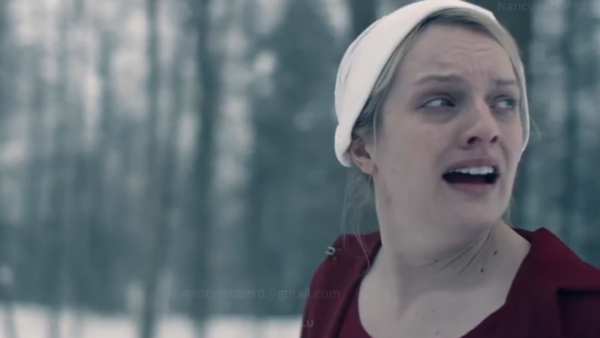