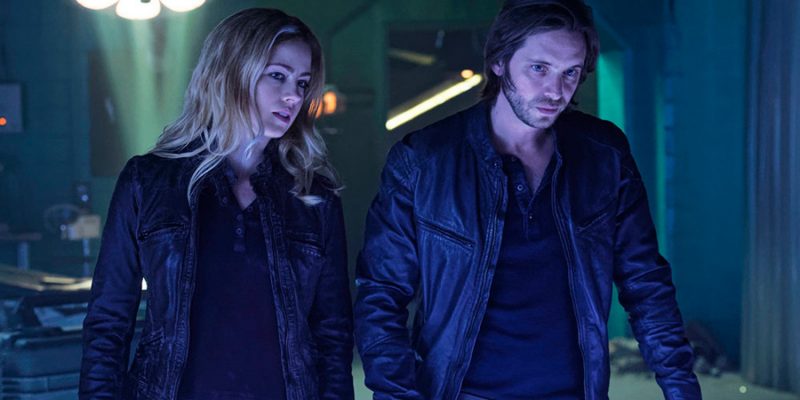 When fans of a show following its main run discuss it, the conversation always turn to the same topic. “Did you like the ending?” we’ll ask each other about 12 Monkeys. My answer is: Yes. I liked it. The episode, The Beginning, felt like a love letter from the writers to the show itself. Everything we liked about the show has a happy ending. Everything that caused all the freakin’ trouble ended painfully and horribly. You know. To preserve causality. If causality demands that you freeze while bleeding to death from being cut in half, so be it. Congrats, Terry Matalas and the writing crew. I will definitely follow you to your next shows. Also, congratulations to Aaron Stanford, Amanda Schull, Emily Hampshire, Barbara Sukowa, Todd Stashwick, Alisen Down, and Brooke Williams. Great television writing almost doesn’t count without great actors to make it come to life. We 12 Monkeys fans had that in spades. Thank you all for an amazing series.

Enough babbling. Let’s take a look at the episode.

I went into this season expecting to see Athan (James Callis) again. Although his cycle ended at Olivia’s hands in last season’s finale, we all knew he’d traveled a LOT with his splinter-vest. I think he wanted to know who these people were that had so much to do with his life, but never met. We saw him visit his parents last season, like trying to get a read on who they were. Given how MUCH he saw, I think Athan knew he was visiting his own grandmother when he stopped in with Jones. She and her initial team had just recovered Raritan after many years away, so Athan wanted to place a single idea into her mind, before other situations and priorities clouded things: “Save the one.” 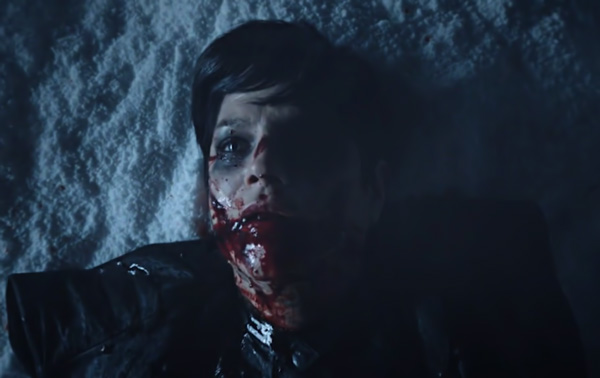 She dies alone, just a torso, frozen, about 1200 years ago. Her later-in-death exploits include becoming the rotted corpse from which Markridge extracted the original plague virus. I imagine that in the reset, with her Messenger Mommy having been sent back in time, Olivia was never born. Bye, Felicia.

Katarina Jones starts the episode is pretty bad physical shape. The effect of the temporal radiation have almost given her all she can take, but she remains committed to see thing through. Did you catch the bit about the initial serum? Remember way back when you needed a serum to withstand the effects of the machine? Jones admitted in this episode that she used her own DNA as some kind of basis for the initial run. This explains why James Cole became the first time traveler: they share DNA. She also admits that her own ambition to create time travel also created the entire 12 Monkeys problem in the first place. Pretty big mea culpa there, Jones, but a lot of other folks played pretty insane roles in the whole thing too.

Through the whole assault, losing the Daughters, losing Adler, Jones never lost composure. I’d love to see her and Admiral Adama (Battlestar Galactica, Edward James Olmos) play cards one day… Post-assault, Jones hangs in while splintering all non-blood relations back to their respective times. She has enough time for two things. First, she programs in Cole’s final “erase yourself” splinter. Then, she has one last smoke before dying at her table, just as Cole admits he thought of her as his second mother. Later, we learn how Athan’s advice to, “Save the one,” inspired Jones to both erase Cole and save him at the same time. In the end, Jones, the woman who wanted no family, was ALL about family. 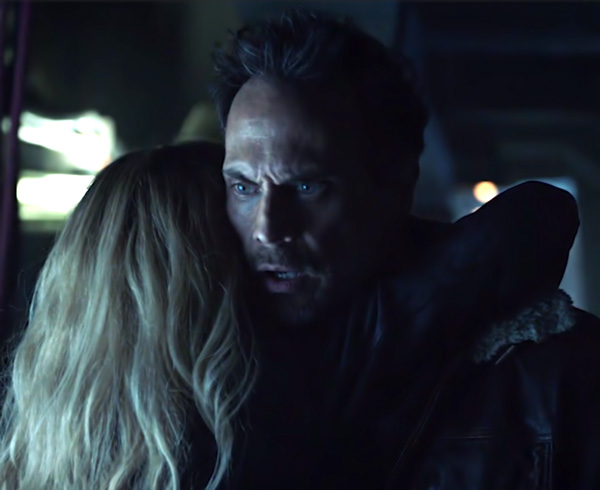 Ever since Deacon survived that time Cole and Ramse set him up a couple seasons ago, I stopped betting against Deacon. Time and again, this guy has proven the most resilient character on the show (and maybe of all the shows). Dude gets beheaded last week, but knowing the audience loves the guy, the writers take advantage of the slightly earlier point in time to bring him back into the fold. Although this is West VII Deacon at the top of his swagger-y game, he can see reason and has a sense of honor.

Between Deacon and Jennifer, no other characters had so many of the show’s best lines. I’ll give this episode’s top honor to Deacon when he said, “Still got it,” after Cassie, a very pretty stranger to him at this point in his life, hugs him and says he’s a good man. Actor Todd Stashwick put about 7 different emotions into that line and facial expression and I understand and felt them all with him. Kind of like when Agent Gale got a “re-do” on his exit from the show, the writers gifted us with this heroic send-off for my own dark horse contender for favorite character. 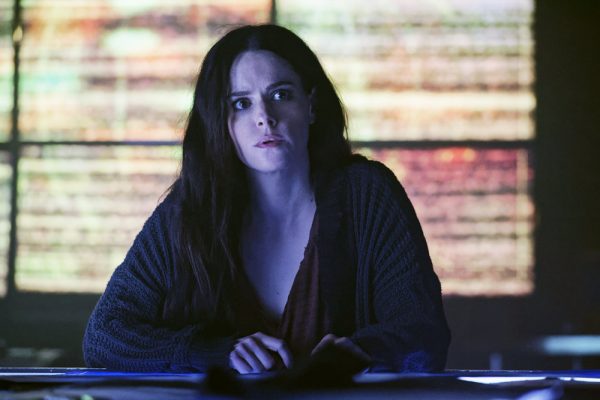 Team Splinter uses Cole and Cassie as their main agents to cause Olivia trouble, but this episode required all hands on deck. All the hands. Young, old, dead, not dead yet. All hands. Jennifer’s first mission: lure Titan out of hiding and into their neighborhood. How? Why, by tripping with the red tea and pissing off (and leading on) Olivia, that’s how. No Team Splinter member can handle a chore like that quite as effectively as Jennifer and she performs beautifully. Her second mission put her in harm’s way, but she fared well. She and Cassie penetrated Titan and found its processing center. (They needed this part because Raritan’s computers would have taken years to calculate how to erase Cole.)  Thanks to what I assume to be Primary intuition, Jennifer also makes use of the Titan PA system, like a kid alone in the Principal’s office, to play Deacon’s song and distract the bad guys.

Old Jennifer plays a huge role here. Not only did she bring the Daughters to re-take Raritan after it fell to the 12 Monkeys, she also rallied Deacon of the past to their cause. Without Old Jennifer, Team Splinter would have been toast. Once all the shouting’s done, Old Jennifer leads Deacon away, promising to show him what he needed to know, her full Primariness fully restored to normal.

Young Jennifer’s departure was sweet and true to her character. Jones’ kind words for the woman that would raise her daughter for her brought strange moisture to my eye sockets. Her bow and stuffed unicorn returned me to my usual stoic sanity. 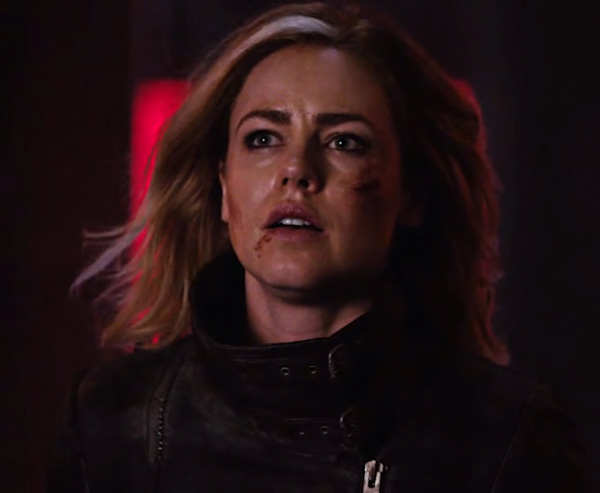 Cassie had us going there for a second, didn’t she? One version of a “happy ending” for this show included Cole and Cassie killing the Army of the 12 Monkeys and just living out their days in the apocalypse. Given that, I found the tension during her last second deviation from mission very believable. The Missionary (Christopher Lloyd) got into her head a couple episodes ago, saying the red forest and its absence of time would let her stay in the best moments of her life. Faced with Cole’s erasure or an eternity with him, but in some weird hell, she needed some convincing before making the right choice. She chose to believe Cole’s “specialness of now” speech and turn off the De-time-ulator, knowing she’d lose Cole.

What a journey with Cassie, over this whole series! When we met Cassie, she held an important job and tried to save the world, albeit ineffectively. She couldn’t fight, she still held with modern ethics and societal norms for behavior. Make her face the apocalypse that arguably resulted from the medical profession’s inability to contain a plague and BAM! We get the Cassie that will stick he mortal enemy’s body right in the way of a stray time-travel beam. It’s easy to see why Cole proposed; you’d always want Cassie with you, on your side, fighting with you. It broke my heart when Cole had to send her back. 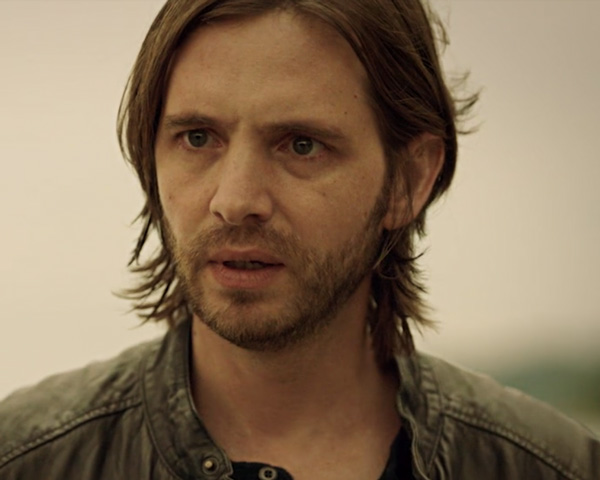 Cole had a busy episode. He always knew that if they won, he’d lose Cassie and reset along with everyone else. Now, he knows the only way to win, is allow himself to be erased from time, basically paradoxing himself. But still, he fought knowing his reward was so grim! We should have known this episode would work like a “greatest hits” album when Cole lobbied to bring Ramse back from the past. Without much time to orchestrate a betrayal, Ramse turned out to be very helpful during the pair’s Dirty Dancing inspired, Camaro-driven assault on the Army of the 12 Monkeys.

Cole having to convince Cassie to turn off the machine brought the best of Aaron’s Stanford’s acting chops to the fore. His character held firm, never fell into the melodramatic, and plead his love to let him go, essentially. He then has to send all of his friends back to where they came from. In a way, this was an act of faith on his part. He has no special powers or academic background to understand the bigger picture. He’s taken the information presented and chosen to believe it. He believes by sending Ramse back to the moment of his death, Ramse -should- live again when things reset. Same for Jennifer and Cassie.

His final moments with Jones, his maternal grandmother and surrogate mother, touched my heart. So much time had been spent squabbling, arguing, insulting, and even shooting between the pair over the years, but it all came down to one final smoke, alone together, at the end. Trusting Jones’ final program into the machine, he has to engage it himself. Did anyone else wonder if that one single button to turn it on had been there the whole time? Anyway. Let’s take a look at the…

This is the part you’ll either love or not love about the finale. Some may argue that things turned out too perfectly for everyone. To that, I would echo what Jennifer said to Cole when he woke up in the Florida Keys. Time owed Cole one for sure, but maybe it owed the others a little something for the effort also. Cole got the golden ticket here, having been erased from time, but still allowed to live on. Essentially, his existence began right then and there on the beach. He has his memories of what actually happened, but I doubt you’ll find his birth certificate anywhere. Jennifer being there shows that Primariness has nothing to do with time travel adventures – some people just have that power. It was the time travel that turned them into crazy people.

Let’s rundown how everybody turned out. Without uncontrollable visions in her head, Jennifer realizes her potential as a scientist and clones her own unicorn. Ramse and his son Sam play a board game together inside what looks like a nice place to live (or at least to play board games). Deacon and his brother run a bar, just like he wanted. Time allowed Jones a re-do on her initial approach to family, by the looks of things. In the original timeline, Elliot had taken off when she had wanted to abort Hannah. In the new timeline, all the Jonses laugh and talk in a spacious, well-appointed living room together. Cassie is unique among the Team Splinter, non-Primary survivors. Although she can’t remember with clarity, she knows something is missing from her life once she passes the point at which she first met Cole originally. She eventually winds up in the house the two of them owned in the 50s, working as a regular old doctor. She’s there when Cole shows up and I know they lived happily ever after.