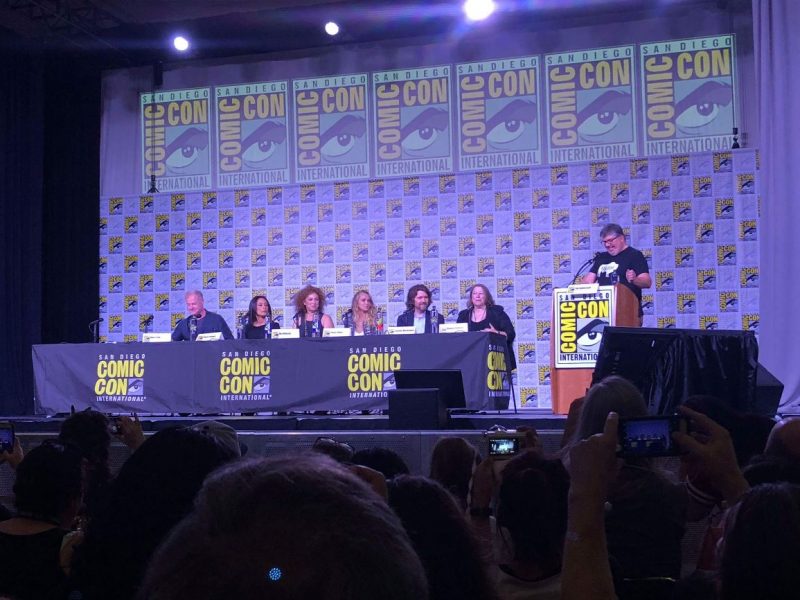 Some lucky fans at San Diego Comic Con got their first glimpse of the cast and some US distribution news in today’s panel which was held in Ballroom 20, one of Comic Con’s larger venues which holds upwards of 4,000 people.

Some audience members and super fans lined up at 5:30 am for front row seats. It was worth it to hear Deborah Harkness, historian and author, talk about the inspiration for her All Souls Trilogy and to witness the clear affinity the cast members have for each other. On the panel were the author of A Discovery of Witches, Deborah Harkness; one of the producers from Bad Wolf TV, Lachlan MacKinnon; actor Teresa Palmer (Diana Bishop), Alex Kingston (Sarah Bishop), Valarie Pettiford (Emily Mather), and Owen Teale (Peter Knox).

First, the news US and Canadian fans have been awaiting. A Discovery of Witches will air on streaming platforms Sundance Now and Shudder, presumably in September or later to line up with Sky One’s release date on September 14, 2018.

As the moderator introduced the panelists, the trailer and clips from A Discovery of Witches were shown so their work would really introduce them to the audience. Audience members saw the trailer and then Deborah Harkness told us she was inspired to write the book(s) on a rainy September trip to Puerta Vallarta when she walked into a shop and was surrounded by books about vampires.  Days later she had the makings for her first novel. For a time, she focused on the books and the day after returning from a book tour had a message from Julie Gardner of Bad Wolf to discuss making the first book into a television show. Deb was all onboard.

To introduce Teresa Palmer (and Matthew Goode who was not present due to working on a current project in Ireland), we were treated to another clip of Diana and Matthew Clairmont in the Bodleian Library when Matthew witnessed Diana using just a tiny bit of magic to get a book off a high shelf.  Then Teresa Palmer told us much she loved the character of Diana Bishop, read the books and the script and hit it off with Matthew Goode immediately. 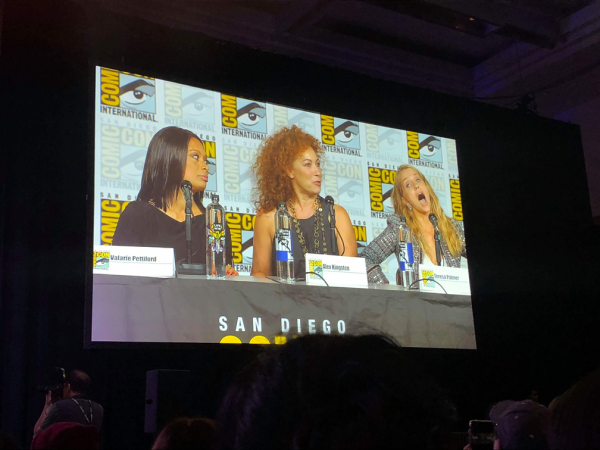 We saw an additional clip of Alex Kingston and Valarie Pettiford as Sarah Bishop and Emily Mather from a scene at Bishop House where we see the aunt and niece dynamic when Diana calls her aunts with news about a mysterious book, Ashmole 782, and her reluctance to further examine the magic associated with it. It was a joy to see Valarie and Alex’s rapport on stage!

Last but not least, we saw a clip of Owen Teale as Peter Knox interrogating the witch who witnessed Diana Bishop’s recall of Ashmole 782 in the Bodleian Library.  Owen Teale launched into a defense of his character as basically a good guy who just wants to save his species, the witches, destroying the vampires would be a bonus.  Shortly after Owen was introduced, Teresa Palmer pulled out Ashmole 782 which was so beautifully crafted. Valarie Pettiford gave a huge shout out to the set designers. 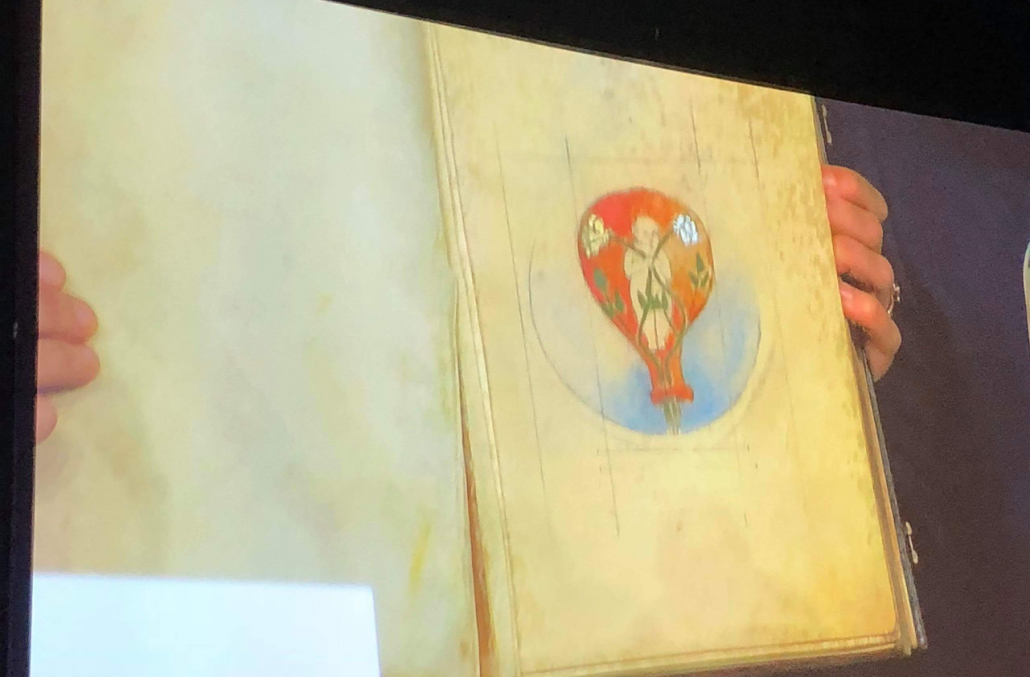 During the panel we were treated to insights into the All Souls world in which love is love as long as it’s not between species (witches, vampires, or daemons) unless you’re more tolerant like Emily Mather. The forbidden love between witch Diana Bishop and vampire Matthew Clairmont is central to this story but in a world where Diana, an untrained yet powerful witch, is clearly in danger, she decides to trust the vampire who protects her.

For live tweets of the panel, on twitter visit @allsoulspod and @rtidwell730.

Many thanks to Jenny Christensen for sharing her experience at SDCC and who wrote this for us.

Jenny C. is older than Diana Bishop but younger than Matthew Clairmont. She currently calls Richmond, Virginia, home. Jenny started in this funny fandom world with Outlander with a full on OMG moment when she saw Graham McTavish the first time at her first Comic Con in 2014. She’s looking forward to All Souls Con in Philadelphia next month. Jenny C resides in Richmond, VA, with her husband and four children. She is a proud veteran of the US Navy, Duke alumna, and currently a stay at home parent who volunteers A LOT and is rarely at home.
On Twitter and on Instagram, Jenny can be found at @jennyc_va.