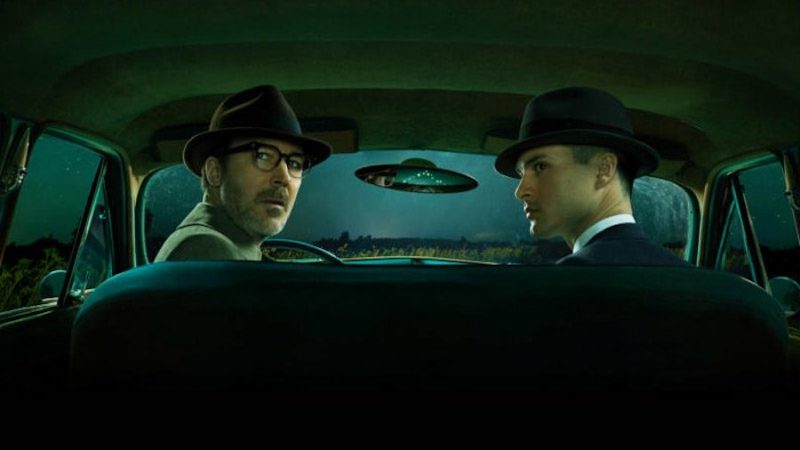 If you know me, then you know I am a huge fan of alien based science fiction. Falling Skies on TNT was the last show that I was really super excited for but that changed when I dropped into San Diego Comic Con this year. I found out History was bringing a series about aliens and UFOs to TV. Only this time it was based on an ACTUAL government project. This project was code named Project Blue Book.

Now I know what you are thinking, is this a cheap documentary style series? No, it is not. In fact, it brings with it a well known cast and producers. Robert Zemeckis (Contact, Back to the Future, Forrest Gump), Jack Rapke (Cast Away, Flight) and Jackie Levine (Allied, The Walk) are executive producers. The drama stars Aidan Gillen (“Game of Thrones”), Michael Malarkey (“The Vampire Diaries”), Laura Mennell (Watchmen, “The Man in the High Castle”), Ksenia Solo (Black Swan), Neal McDonough (“Arrow,” “Legends of Tomorrow”) and Michael Harney (“Orange Is The New Black,” Soy Nero).

Between 1952 and 1969 the US Air Force investigated UFOs and related phenomena. This project was code named Project Blue Book. The series is inspired by the personal experiences of Dr. J. Allen Hynek, a brilliant college professor recruited by the U.S. Air Force to spearhead this clandestine operation (Project Blue Book) that researched thousands of cases, over 700 of which remain unsolved to this day. Each episode will draw from the actual case files, blending UFO theories with authentic historical events from one of the most mysterious eras in United States history.

History Channel enlisted fans at San Diego Comic Con with their ‘Project Blue Book Headquarters’ activation. The dramatization is based on the true, Top Secret investigations into Unidentified Flying Objects (UFOs) and related phenomena conducted by the United States Air Force from 1952-1969. Fans were treated to a preview of the new series, interview by a sketch artist to review their encounter, and a debrief of previous cases.

In the final room, you were able to write up a message and send it up to space. It was a fun and interesting activation to promote the new series, based on an actual declassified government project. After you were done, you could return an hour later to retrieve your drawing based on your encounter. Check out ours!