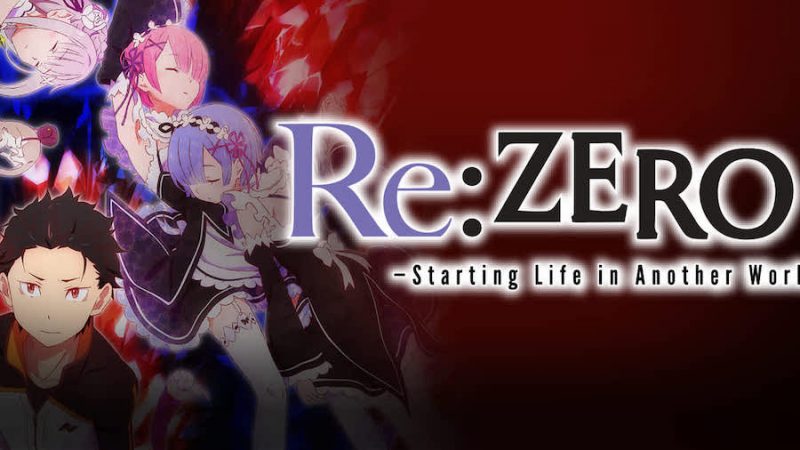 Re: Zero – Starting Life In Another World – Season 1 Part 1 Review

Subaru Natsuki is suddenly summoned to another world. With no sign of who summoned him, he soon befriends a silver-haired half-elf girl. When he and the girl are mysteriously killed, Subaru awakens and discovers that he has acquired the ability “Return by Death”, enabling him to reverse time by dying.

Our number one pick for best anime series of 2016 was Re: Zero. This should come as no surprise to fans around the world who tuned in weekly to watch Subaru get tortured again and again and again. Or to watch Rem be the absolute best girl and Subaru just trash that ship in every way possible. If “Return By Death” wasn’t killing him, we sure wanted to. The raw emotion in this series is difficult to surpass and that is why it made our list at #1.

The series is finally starting to come out on home video so we review season 1 part 1 released by Funimation in partnership with Crunchyroll.

In Re: Zero Subaru Natsuki is surprisingly summoned to another world. With no sign of who summoned him he soon befriends a silver-haired half-elf girl. When he and the girl are mysteriously killed, Subaru awakens and discovers that he has the ability “Return by Death” enabling him to reverse time by dying, though only he remembers the events of the previous timeline.

During the first half of season 1, Subaru finds himself struggling to learn magic and understand whats going on in this new world. After being killed horrifically several times, he fears any wrong move by Emilia. He is a fool at the best of times, but tries his hardest to to protect those close to him. Subaru manages to recover an insignia for Emilia that is required for her to participate in the selection process to be the next monarch. As his reward, Subaru asks to work in the mansion alongside Emilia and the twin maids Ram and Rem.

Someone keeps killing him while at the mansion and he dies many times trying to reveal the truth. Each time he learns something new and continues to change his approach to staying alive. Ram and Rem are key to him surviving but something else is at work. Every time he tries to tell anyone about his ability, a black shadow with hands overwhelms him.

The first half of Re: Zero season 1 ends with Emilia finally at the ceremony for the selection of the next monarch. Subaru seems to be on good terms with the maid twins and has managed to live longer than ever through his quest. But all good things are likely to come to a halt as we enter the second half of the season.

I don’t think I’ve watched a series this psychologically dark since Evangelion. Subaru tries over and over to save his friends only to be met with death. And not just any death. Cruel, excruciating, emotionally damaging death. Over and over and over. We all want REM to be the one he gets with. The question is, can he ever catch a break? We highly stress you watch this series. Its not what you would expect at first. Re: Zero comes in as my number one pick for best anime during the summer season season. 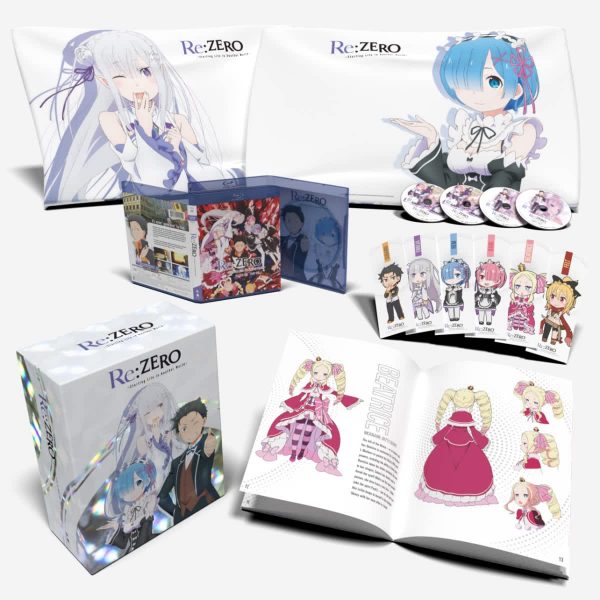 The Season 1 Part 1 release of Re:Zero includes the first 12 episodes of the series. You also get the following extras:

The limited edition includes everything above plus:

There has also been a lot of discussion about color banding and compression issues with this release by Funimation and Anime Limited in the UK. The companies are looking into the complaints to see if it warrants a disc replacement or not. There have been cases in the past where Funimation has sent replacement discs for QA issues on a release (Code Geass). Sometimes the issue is a QA issue with the disc authors and other times its a masters issue with what was given to the company by the studio.

We reviewed the copy we purchased from Amazon and did experience the color banding or compression issues noted by others. To be fair, had I note heard about the complaints prior to watching the blu-ray I likely would not have noticed. They only seem to show during darker scenes and if you really focus and pause to look for the issues. In reading that the quality in UK and France releases were just as bad or worse with different companies doing the disc authoring, it all points to a bad master stored for international licenses. If that is the case, Funimation will be on top of the studios asking for a new copy to replace bad discs. How long that will take depends, but no official word has come out from Funimation yet on the issues.