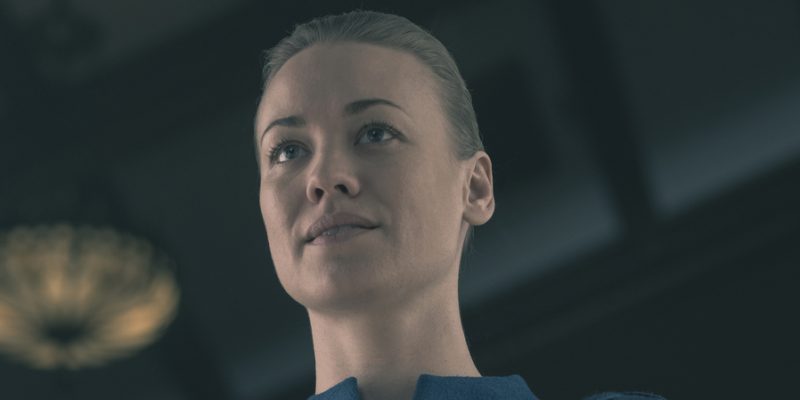 The Handmaid’s Tale 213 Review The Word – A Dateless Bargain

The greatest loves have some of the most unimagineable sacrifices the human soul can endure. When to give up and surrender when it appears all is lost. Or that a better fate awaits at the end of a long road. With Seaon 2’s final episode of The Handmaid’s Tale, it is a testimony to the wisdom and strength of some of the women of Gilead. Each is pushed to her seeming limit, only to find fresh reserves and a new level of love, faith and purpose. June, Emily, Serena and Rita dazzle and amaze with their dedication and devotion to improving their surroundings. Bringing much needed light and hope into not only the house of Waterford, but Gilead and beyond is a huge challenge. 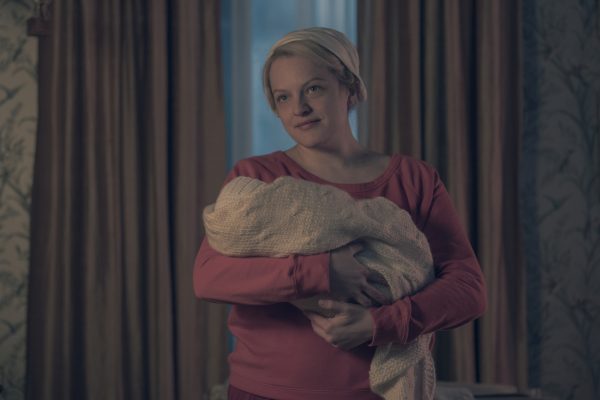 Death inspires all kinds of regrets, guilt and apologies. The axiom that this arrives a little too late echoes mournfully in the Waterford house. For Eden is gone and what little remains of her will soon pass into obscurity. “Heretics don’t get to rest in peace. They use their remains for animal feed'” is the funereal dirge. To brand such a gentle soul and true believer with that label shows the lack of mercy at the heart of Gilead. June and Rita feel complicit in that philosphy, for lack of kindness and infidelity are their crimes towards Eden while she lived. Even those who want to elevate the rights and status of women in this society were still cruel to one of their own under their roof. The hypocrisy is fresh and still cuts deeply. Perhaps there is chance of redemption when June finds Eden’s Bible. Let us pray. 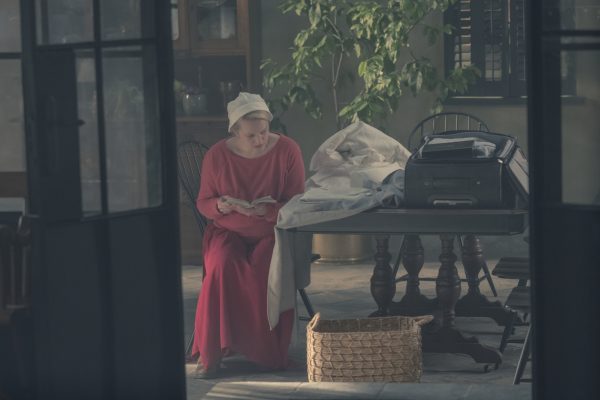 Another visit to the Waterford greenhouse. Is this the place where all living things go to die? Serena’s lack of success with her orchids has given way to a happy time with baby Nicole. The clash of wills and ideologies between Nicole’s two mothers lays bare an insidious flaw. What do we do with a generation of Gilead girls who are raised to revere the Word of God without being able to read it? Is the Word to be only interpreted by men from now on? How can we raise strong women when they are subservient in all intellectual, sexual and philosophical matters? Serena justifies that “Eden wasn’t strong” for not following the rules about reading. How can Serena still feel that way when she is denied that right herself now? What sin could there be in wanting to read The Word of God? June fights for light in Nicole’s rights, while it appears Serena chooses to remain in the darkness.

The Good Mother (and Father)

How do we love our children, protect them and keep them safe? How precious are they? More than the rule of law? The horror of discovering that Eden’s parents turned her in to the authorities smacks of the Nazi regime and being a good German. The betrayal of family members was a rule of the State and split families apart with deadly consequences. Eden introduced her parents to Isaac with a whole heart and their final solution resulted in execution. When Fred asks them about their other daughter, it is truly chilling and sets the stage for a showdown with June. 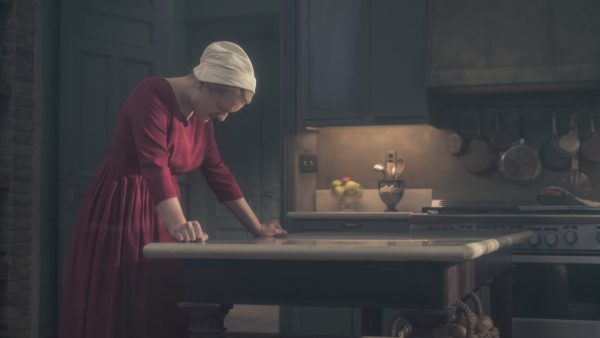 “What are you going to do when they come for your daughter?” An ominous question. With Fred spitting out statements like “The mouth of a woman is a deep pit” and “You are the misery of all men, all of you”, how loved and cherished is Nicole by her father? Tempers boil over with these two slapping each other, an exchange long in the making. Yet there is much that hangs in the air, none of it good. 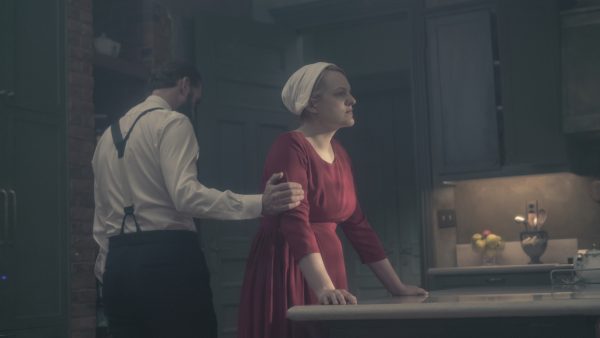 Fresh off her fight with Fred, June and Nick have a lovely, peaceful with moment with their daughter. This is love, that is what family should be. I felt so much peace in that moment. Their happiness filled the room and when June tells Nick, “Look what we made”, a smile went through my heart. 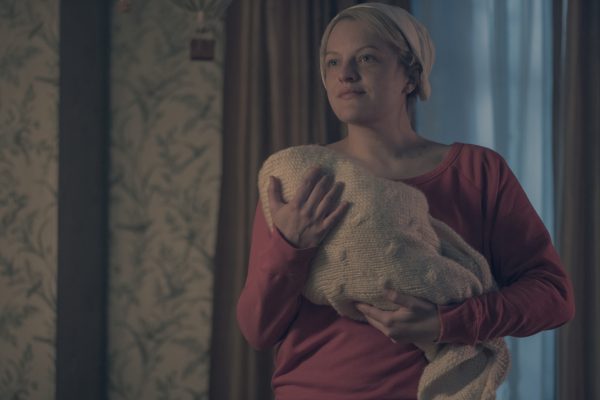 It was lovely to see some of our favourite handmaids out for a walk, using each other’s real names and sharing their true selves, a small bit of “freedom’ in their world. Emily’s worry about tonight being her first ceremony with Commander Lawrence was tangible. To have the notoriety that you screwed a man into a fatal coronary is quite a mountaiin to overcome. But I sense that Emily is so permanently damaged, she may never recover her fighting spirit. Emily’s son Oliver is 7 years old that day. It holds no air of celebration since they are speaking on a bridge with bodies strung up over the side. Under His Eye, the laws of Gilead are harsh and extreme.

Is it a new day for the wives of Gilead? Serena arrives at Naomi’s house, full of motherly concern for the daughters of Gilead. What will become of their girls? Will they have a life of purpose? Has Eden’s death struck some kind of renewed commitment to change in Serena? Her bravery in having this discussion reminds me of June, Emily, Eden and even Janine. Is she dissatisfied with the status quo? Has being a new mother altered her vision for what is good for all those in Gilead? 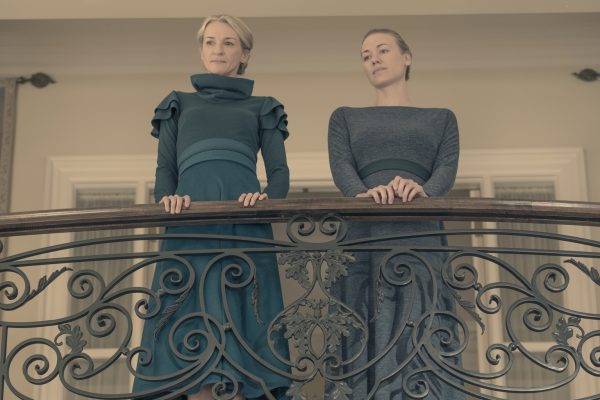 What awaits Emily in the house of Lawrence and her first ceremony with her Commander and his wife? The dread and terror build. She is armed with a knife and looks as if she is about to kill herself (or someone else), kneeling in front of the fire, an assassin’s weaon concealed. Has Emily had enough, were her words to June a final good-bye? The old Small Faces song Itchygoo Park plays, a fascinating counterpoint to the scene. Commander Lawrence’s words cut through the cheery/dreary vibe as says there will be no ceremony tonight. “Not going to do that with you.” What exactly is going on here? What kind of game is Joseph playing? It’s as weird as his choice of music. Side note: Itchygoo Park was written about Little Ilford Park in London, which was overrun with itchygoos, a nickname for stinging nettles. Is Emily that caustic plant in the house?

The Bold & the Beautiful

I was so happy and amazed to see Serena at the Gilead Council meeting. She seemed awakened to a new purpose and a higher calling. Fred is not pleased, but Serena soldiers on, her bravery and commitment shining. To see her being supported by several Gilead wives in that deathly “star chamber” hinted at the promise of a new world. “In the beginning, the Word was God” she reads. But men are frightened about change and Serena is escorted out of the hall. Fred has her taken away, thus denying the girls of Gilead the opportunity to be taught to read. His vengeance will be swift. 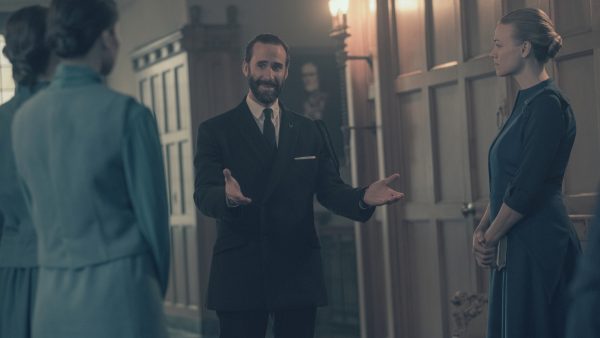 There Will Be Blood

Emily is not a woman to be messed with. That is never more apparent than when Aunt Lydia comes calling after the “ceremony” the previous night. The pious statement that Emily will find opportunity for redemption with the Lawrences ignites Emily like a powder keg. She stabs and beats Aunt Lydia to within an inch of her life. What will happen to Emily now? Commander Lawrence is on the scene and asks “What are we going to do with you?” ” You must be so proud of yourself.” Being driven to an unknown fate, Emily finally cracks as the words of “Walking On Broken Glass” fill the car. And my heart breaks for her 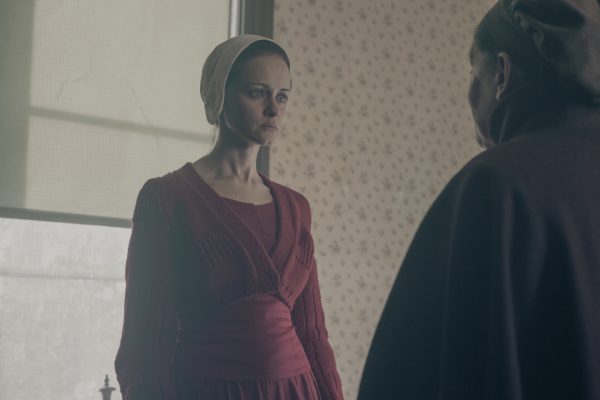 .The Waterfords return home, with Serena subdued and Fred smug as ever. Her punishment is having her pinky finger chopped off. With Emily’s clitoris removed, Janine’s eye taken out and now one of Serena’s digits hacked off, is this the fate that awaits the future daughters of Gilead? Will they be a generation of the amputated? Fred would be quite happy in that world, and in the kitchen, he prays that “God send me an obedient woman.” With Fred drunk from power, he suggests that “rules can be bent for a high-ranking commander.” His faithlessness is revealed by suggesting that June stay with them, try for a boy and be allowed visits with Hannah. His vicious pimp daddy persona is laid bare. There will be no safety for a girl in this house. 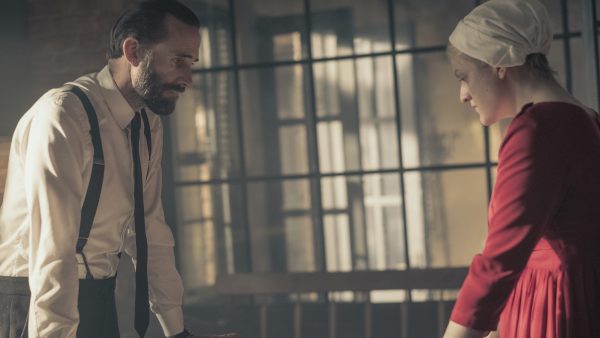 And the chase is on. I must admit, I found this far more exciting and nerve-wracking the second time I watched it. I was so busy wanting to know the end was that I missed a few details. Shame! The trio of Rita, June and Serena help June escape from the Waterford residence. Serena saying a tearful goodbye to Nicole reminded me how much things had changed between her and June. This her “10 minutes” with a dear daugher and her love for Nicole overflows. Long way from the woman who held June trapped in a locked car, unable to speak to Hannah outside. Both mothers reach a beautiful understanding as to what’s best for their girl. Through streets and high grasses, with helicopers overhead, a rescue vehicle approaches. And what a pair are here to save the day! 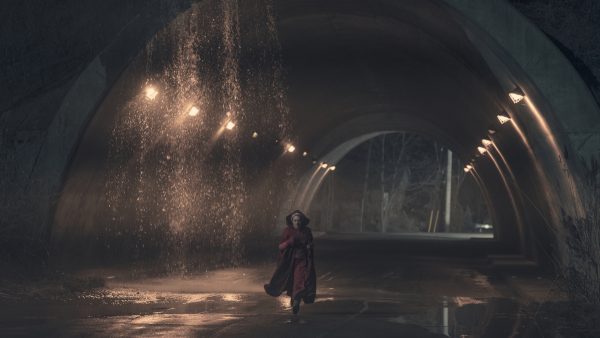 Commander Lawrence and Emily are together and offer June a way out with her daughter. “I’m getting myself in deep shit”, declares Joseph. No kidding! Bravo to Bradley Whitford for selling that line with all its implications. He is one of the good guys, part of the Resistance! As Emily begs her to get in the car, June puts her daughter’s fate in Emily’s hands. Hannah is still in Gilead and cannot be left behind. With one girl on her way to safety, and another still in jeopardy, there is still work to be done. Elsabeth Moss’ grim determination gave a peak into the third season and the future is not bright. What will happen to Serena, Rita, Nick and even Fred? Are they candidates for the wall or is there a sea change in the works? With the Talking Heads’ Burning Down the House closing out the episode, the lyrics prove prophetic. “Watch out/You might get what you’e after/Cool baby/Strange but not a stranger/I’m an ordinary guy/Burning down the house!” 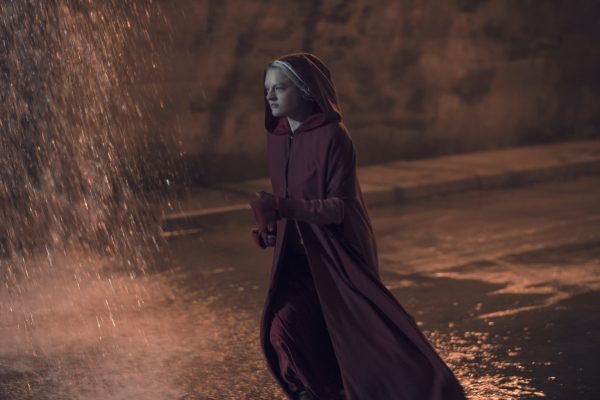