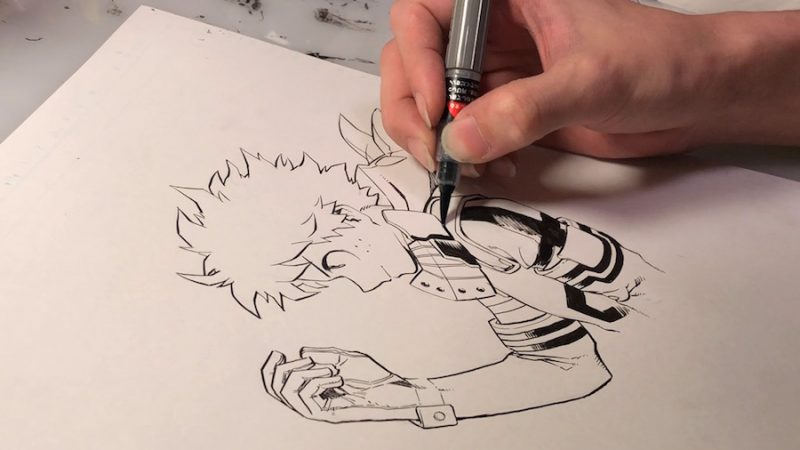 In San Diego this weekend, Viz Media offered a special treat to fans of the My Hero Academia series. Creator and artist Kohei Horikoshi Sensei was on hand to discuss the hugely popular series. Along with him Viz Media and Funimation brought in some of the voice actors from the anime series based on the manga, Justin Briner (Deku) and Christopher Sabat (All Might).

Why did you want to become a mangaka?

I have always loved drawing since I was in preschool. And knowing that mangaka can draw and thats a job. So thats why I became a mangaka.

How did you come with the idea of making a manga about super heroes?

I grew up watching super heroes in anime and manga. Those characters are something I always looked up to. So naturally I got into mangaka.

Since we are at SDCC, who is your favorite American super hero and why?

Spiderman. First and foremost the character design for Spiderman, it never gets old.

Your character designs are superb and distinctive. Can you tell us about your design process? Where do you start?

I don’t have a very direct answer to it. Sometimes I will start with “what is this characters role in the story” and then I will design from there. Or else I will start with the design and then figure out where the character fits into the overall story. Its never one way.

Which character in the series do you most relate to?

How did you come up with Mineta’s quirk?

Catch more from Horikoshi Sensei in an interview for Shonen Jump Podcast over at Viz Media site. Also you can check out the crowds Plus Ultra call out to the creator just before he came on stage below.

My Hero Academia was HUGE at Comic Con this year. So much so that getting ahold of these exclusives was near impossible. We tried each day to get in line super early and never managed to make it before they sold out. But what they did have were pretty awesome. Take a look at the variant cover for the manga and the drawing used for the limited numbered poster.

Sadly it appears a lot of the manga and posters ended up on eBay by scalpers for between 5-10x the purchase price of the items. So there isn’t a zero chance you could get your hands on one but I prefer not to encourage purchasing from scalpers. 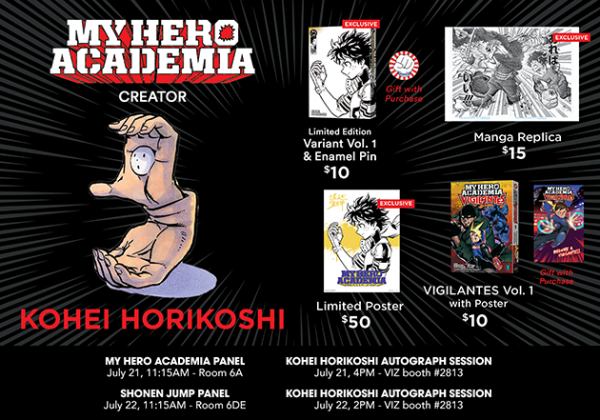 As previously released by Funimation, My Hero Academia: Two Heroes will be out in theaters Sept 25th.

Viz Media will continue the bi-monthly publishing of new english volumes for My Hero Academia as they continue their ambitious goal of keeping up with the Japanese releases.

Funimation continues its simuldub of the third season, 1 week behind the air date in Japan. 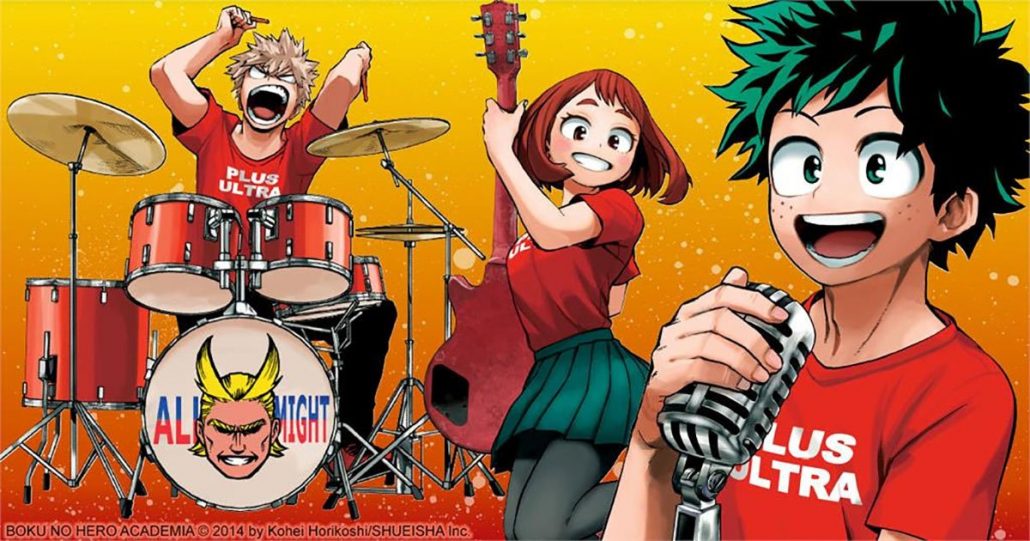 Viz Media also did a Whats Your Quirk contest on twitter. Horikoshi Sensei himself reviewed the entries and had a blast watching the entries! These were the 3 winners picked by Horikoshi himself.

This last one was by far the best entry:

Special thanks to the Funimation and Viz Media teams for putting together this panel. It was a lot of fun to go to and to hear Horikoshi Sensei talk about My Hero Academia with fans.