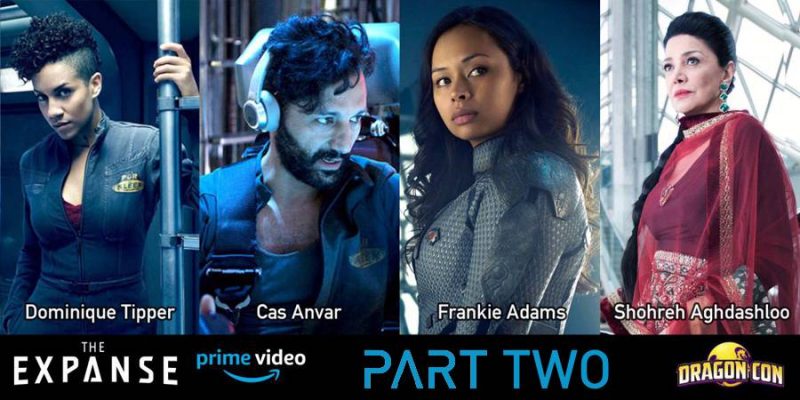 Welcome to our exclusive pre-Dragon Con Interview with Cas Anvar – Part 2. If you’ve just arrived and are wondering what’s going on, you can find part one here:

Okay, now that everyone’s caught up, let’s get on with the rest of this interview with the best pilot in the system – Cas Anvar!

By the time Dragon Con comes around are you going to have any good, juicy news about The Expanse that you didn’t have or couldn’t share at San Diego Comic-Con? 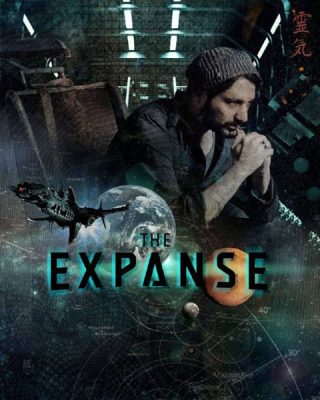 We haven’t gotten scripts yet. I know that the writing room is grinding away like a steam engine right now at full speed. They’re working like possessed animals to get the show ready for principal photography.

It’s quite disruptive to your artistic process when your show gets canceled and then renewed a month later. The entire construct falls apart. You have to re-build your momentum and really start back from scratch. So the writing room is the one that takes the brunt of that because they have to get the scripts ready for shooting.

The actors … it was emotional for us. It was not an easy emotional pill to swallow, but we have the buffer time to adjust. We now have these three months to get ready to shoot, but the writers, they’re working, man! They’re like workhorses right now.

Other than that, I know that Amazon is super excited. I know that they’re planning big things for when they’re ready to launch season four. They’re going to be treating this like they’re premiering a new show, which is amazing because we get a second kind-of premiere. How many shows get to do that, where they have their big opening premiere in season one then halfway through they get another one? 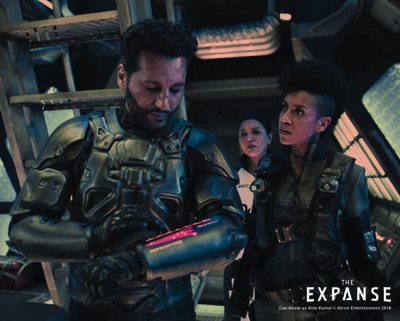 There’s a similar kind of thrust to them. They’re all dealing with an over-arching theme –  a conspiracy; a story that takes three books to kind of reach some sort of a conclusion. And at the end of the third book an entirely new path opens up. The story of The Expanse takes a completely different direction as we start the second movement.

Same characters, same instruments, same history; we’ve all lived through the first three seasons. Now, we’re all more grizzled, we’re weathered, we’re more experienced, and now we’re going into a different journey. It’s a very different experience than some of these TV shows where every episode is stand-alone or serialized. This is truly an ongoing, giant feature film.

Season four moving to Amazon is not inappropriate because we are starting the second movement of our space opera.

Do you have an approximate idea of when season four of The Expanse is going to premiere on Amazon?

All I know is they’re planning a huge thing at San Diego next year. Typically, we take just under a year to put things together and get the first episode ready to air. So if we start shooting in October you’re looking at, if we’re lucky … I don’t know. We’re going to be working with Amazon so it’s going to be a different captain of the ship, but my guess would be late summer/early fall – somewhere near the end of 2019. San Diego Comic-Con is going to be a big launching pad for that. 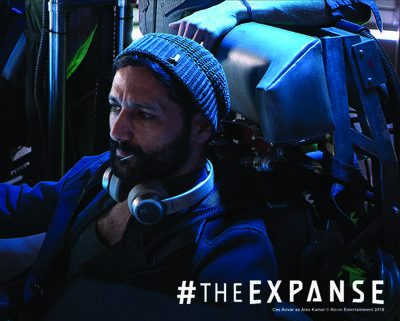 Do you think you guys are going to get a bigger budget to handle these 1500 ring gates, these new worlds, and all that comes with it?

I have no idea; you know? I know we’re dealing with a different producer. I know that these guys take their original series very seriously, so I know we’re going to be taken care of, that’s for sure.

Getting back to your tireless support on social media – It seems like it was a good time for everyone to take a little time off. Have you taken any free time for yourself? Like maybe a vacation to Mars or just a nice beach?

I’ve done pretty good, actually. If you were following the Save The Expanse campaign I’ve been cast in a feature film starring Diane Kruger and Martin Freeman called The Operative that was slated to shoot in June, July, and August. Which I did; I shot it. The day I was supposed to fly to Europe and start shooting was the day of the Jeff Bezos conference event where the show was picked up.

I hopped on a plane at 11 pm that night or something like that. So I was literally supposed to be preparing for my feature film and got the cancellation notice in late April/early May for The Expanse. I got cast in this film, tried to focus on this film, but couldn’t swallow the bitter pill of losing the show before its time.

You know, it’s not the first time I’ve been on a show that got canceled. That stuff happens, and sometimes it’s time. You’ve done your five or eight or twelve seasons, or whatever, and you’re starting to repeat yourself. You’re starting to run out of material, all the actors are ready to move on, people are getting restless – There’s a time when it’s appropriate. 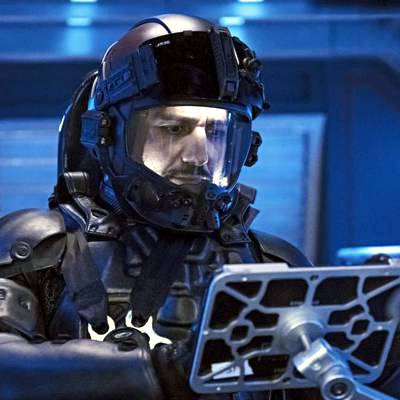 But when you are in the middle of finding your stride and you get 100% on Rotten Tomatoes on your first show of season three and every episode after that. And the audience and the critics are saying it’s even better than the previous one and it just keeps building and building and you know that the rest of the season is just going to be mind-blowing. I’ve read through book four and book five as we were airing season three and I’m like, “Holy crap! We haven’t even gotten to the best stuff, yet!”

So, for me, it was hard to swallow that pill. We had our meeting at the production office and the producer gave us the bad news. We all kind of like hugged and kissed and cried and took our little souvenirs and went down to the parking lot and hugged again and then went to our cars.

I went home and I’m like, “Hell no! Just hell no. No. No, I can’t!” Call me stubborn, call me obsessive, call me single-minded. I, personally, could not accept it so I did some research. I talked to Syfy, I talked to Alcon, the production company. I got a lot of information about the cancellation – why it happened, what would be needed. When I combined all this information in my head I realized that nobody wants to cancel the show. And that it was being canceled for completely logistical, pragmatic reasons and everyone regretted it.

So in my mind I’m like, “This shouldn’t be happening.” So I just gave myself a goal that Syfy says if we get better ratings it could re-open discussions. Alcon, the production company, said over the course of a seven-day span our ratings doubled. Meaning that on day one we had this many people watch the show live and seven days later the number of people watching the show doubled. And so, if we can get those people to watch the show live we’re going to double our live ratings and that is like gold. 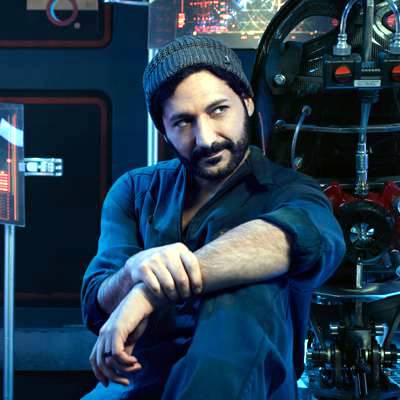 So I said I’m a scifi fan and my show is being canceled. If somebody told me the show won’t be canceled if you just watch the show live wouldn’t you do it? Wouldn’t you at least turn your TV on? So that was my opinion. I’m just going to get my fans and tell them they can save the show by watching it live. And then DVR it and make your voice known to Amazon and focus your energy. Don’t spread your energy in a million different directions – focus, focus, focus.

And 99% of them were like, “Oh my god, I tape the show so I can binge-watch it at the end of the season. I had no idea I was hurting your ratings. Screw that! I’m going to watch live. I’m going to turn my TV on.” I had a bunch of people saying, “But we do The Expanse parties. We get like 15-20 people together and we watch at somebody’s house. That means 15 of us aren’t turning our TVs on.”

That affected ratings, so everyone changed their watching process. And guess what? The ratings went up double-digits in the next episode. Once that happened, the still waters started to bubble and the fans just kept going. We had eight episodes to do this with, so we just kept going and going and going.

Then I think Syfy took notice and all of a sudden Amazon came out of nowhere and they started talking. At that point, once the feeding frenzy started I just kind of like stepped back and let my bosses take the reins and they worked it out, man.

We are so glad as fans that you guys did and I just want to thank you again for everything you’ve done and continue to do. 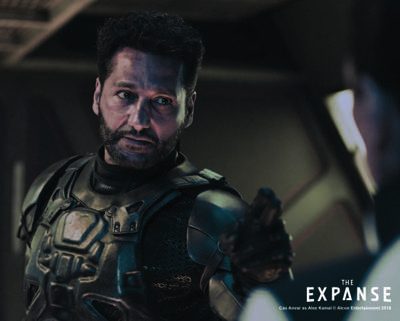 We chose Dragon Con because Dragon Con is the best fan convention in the world. It’s like a San Diego Comic-Con for the fans. That’s why we want to be there and we are dying to see you, dying to hear from you, and dying to take pictures with you. We really just want to touch base with you and tell you how glad we are to be back. So come on down.

We’ll be there the 31st of August, the 1st of September and the 2nd of September. Those are our three days of engagement.

The Expanse season 4 will be shown on Amazon Prime Video, time TBD