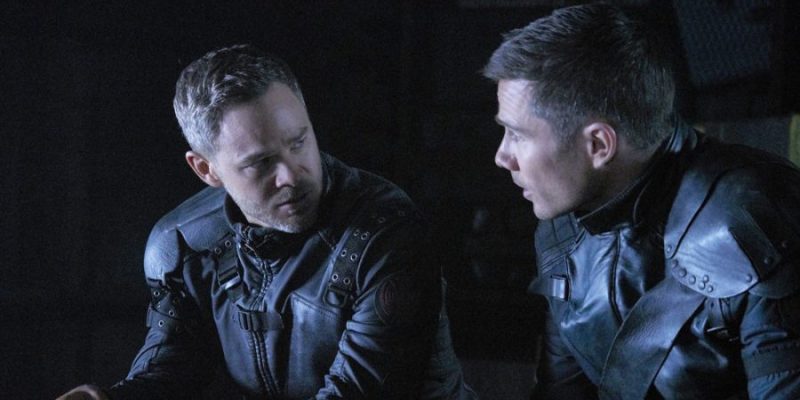 There’s a lot to like about Episode 403 of Killjoys, including the return of Dutch and the feeling that Hullenized Johnny may have a chance after all. But my feeling about the episode can be summed up with these few words — anytime Thom Allison does a little singing, I’m all in, baby. LOL. On many fronts, “Bro-DTrip” delivered everything that makes Killjoys special.

Hey, it wasn’t a big scene, but we got a little treat when Pree, Pip and Zeph, minutes away from suffocating aboard a default-reprogrammed Lucy, discovered that booze and song not only made the inevitable bearable, but also provided the clue to unlock Lucy. And within that, we got a few golden notes from our beloved Pree, which pushed a smile across my face.

Thom Allison is a tremendously talented individual and those of us who keep track of him via social media have been treated to repeated moments of musical magic from him. The “sing for freedom” moment in this episode was a fun little reminder that — he’s all that.

And thanks to some quick thinking from Pip, our intrepid trio emerged alive and tracked down Delle Seyah, D’Avin, a newly-arrived from the “Green” Dutch, and Johnny. Oh Johnny, you were such a bad boy in this episode, weren’t you? I do like the fact that his backdoor into Lucy’s programming revolved around a rockin’ kind of number. That appeals to me. Rock on, Johnny…you Hullen-infused psycho (currently). 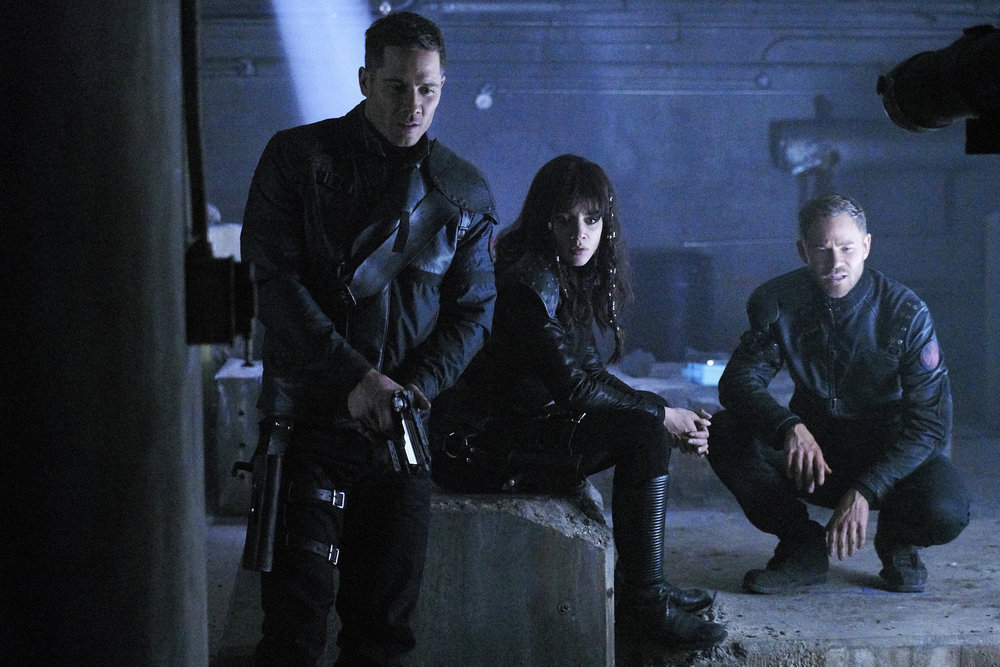 I think in all the back-and-forth good times of the Johnny and D’Avin (great work by Luke Macfarlane here) arc in this episode, the thing that struck me most strongly was the little snippets of personal information that slipped out thanks to Johnny’s Hullen-inspired motor-mouth. There were moments of resentment and sharp, needling comments from both the brothers as they searched for the pool of green.

I mean, of course Johnny was manipulating D’Avin to an end that really wasn’t honorable, but the journey to that moment was fascinating. We learned a bit about their family (Dad drunk, Mom high), the emotion behind D’Avin leaving the family, and Johnny’s festering resentment about several issues.

I found it to be very illuminating regarding their relationship, and even a little sad. Of course Johnny was also borderline psychotic as “good” Johnny was obviously battling “Hullen” Johnny for emotional control, but in those moments of clarity and honesty, the issues that had been festering within each came dripping out. I also enjoyed the use of “apparition” Dutch as a vehicle for drawing Johnny’s true feelings and plans out a bit more.

It was another example of what Khlyen had been implying in the season’s first episode — Johnny and Dutch are connected. And thanks to the Green, Dutch was able to provide some semblance of conscience to Johnny as the episode move along. Again, Aaron Ashmore’s work here is stellar.

Sadly, as we saw, that conscience wasn’t enough to snuff out Johnny’s lust for more green. And he almost killed his big brother in the process of getting it. But thanks to a nice little twist, D’Avin was saved when Dutch emerged from the green. I wonder what it means that the green seemed to crystallize behind her as she emerged? Was it just that pond of green or will the green in the whole J suffer the same fate? And what of those infected with the Hullen green? Will the “dolls” awaken at last? 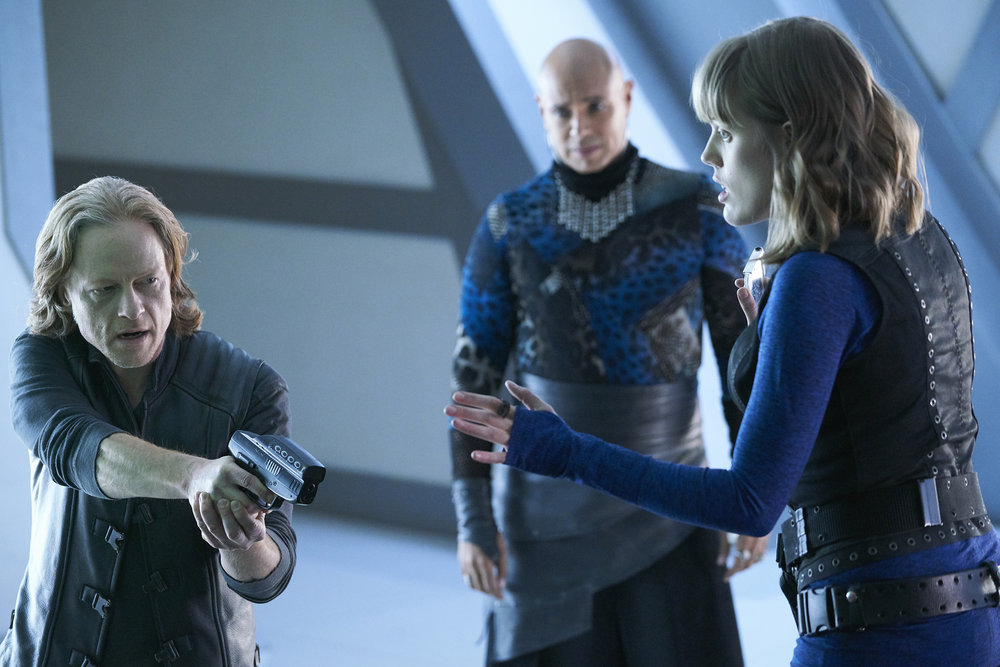 I thought that was an interesting development regarding the green and will be interested to see just how The Lady is involved in it all. She obviously has more cards to play and it should be interesting to see how they all fall. But Dutch is back and, despite her collapse, I’m pretty sure she’ll revive soon — and Johnny will be cleansed. All’s right with the world, right? Not hardly.

There’s a lot about this show that makes me smile and in Pree, Pip and Zeph I find myself perpetually entertained. I’m delighted that Zeph is really discovering herself early this season. She’s taken the borders of her nerdiness and simply obliterated them as she continually makes herself indispensable. Kelly McCormack is killing the role and I love where the show is taking this character — and where Pip may be going as well.

Our young Pip is demonstrating some traits that I’m sure the character had no idea were within him. Nice to see these two characters really growing in leadership roles while our other heroes are off doing their thing. And who would have thought that Zeph needed to think so often…and deeply? I love frequent thinkers, don’t you?

Toss Pree into the mix and you’ve got a trio that is not only smart, imaginative, and capable, but a whole lot of fun together. Every time these three were on the screen they were a delight. And the fact that Turin had to swear Pree and Pip in as Killjoys — I hope that little gem of a moment begets more magic down the road. In the end, our eclectic trio tracked down Lucy, then the boys (and Dutch), as well as Delle Seyah. Not a bad day’s work by anyone’s standards. And it was fun to watch them navigate the obstacles in front of them, including death.

Perhaps Pree put it best when, on the cusp of death, he said, “At my funeral I want singing, booze and burly men.” So good, so Pree, so spot-on. 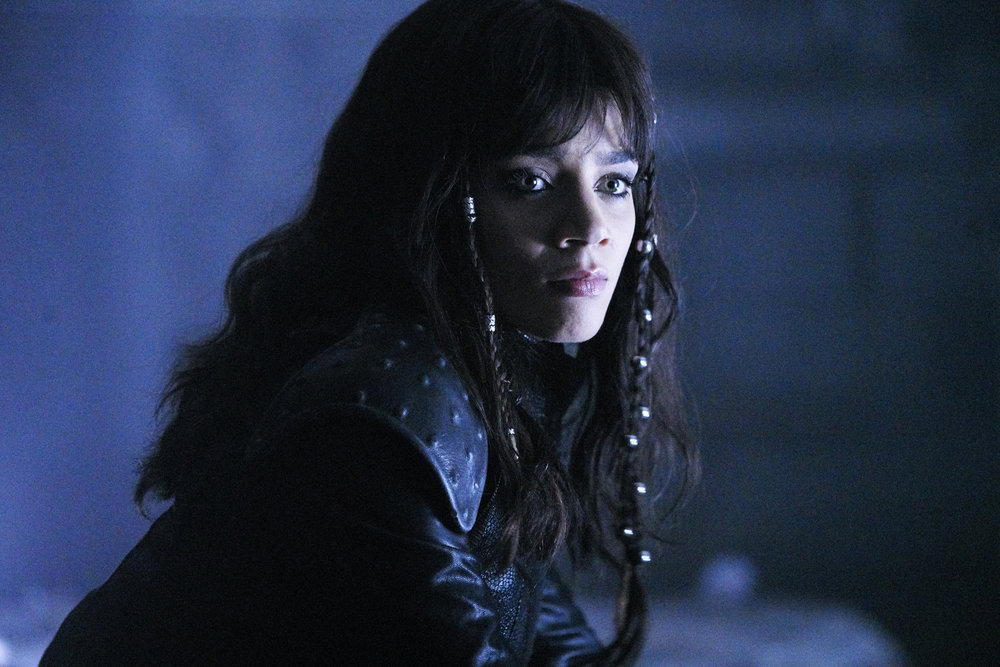 You know, this may have been one of my favorite episodes with Delle Seyah Kendry. She’s always had a sharp tongue and could deliver the verbal jabs with the best of them, but there was some real magic between her and organ smuggler Juno Clay. The verbal probing was not only impressive between the two, but weaved this fun little tapestry of mutual loathing that was a joy to wrap ourselves in.

I thought the work of Mayko Nguyen (Delle Seyah) and Billy MacLellan (Juno) was really top-notch together and I found their verbal battles to be both entertaining and revealing.

It was a nice little story arc that brought two talented actors together to create something very unique and fun. Of course, I don’t know if we’ll see Juno again after Delle Seyah turned the tables on him and had him hauled away, but he promised to be back, so we’ll see if we get Juno-Delle Seyah II – The Reckoning.

So now the band’ s back together aboard Lucy heading back home. We can take it on faith that Dutch will revive at some point and that Johnny will, somehow, be cleansed of his Hullen influences. What we can’t fathom at this point is the child Delle Seyah is carrying. Now that her water has broken, the moment of truth (and reality) is on the near horizon. If we’ve learned anything from the Killjoys writers, directors and showrunners, the odds of this being a straight-forward birth are nil. 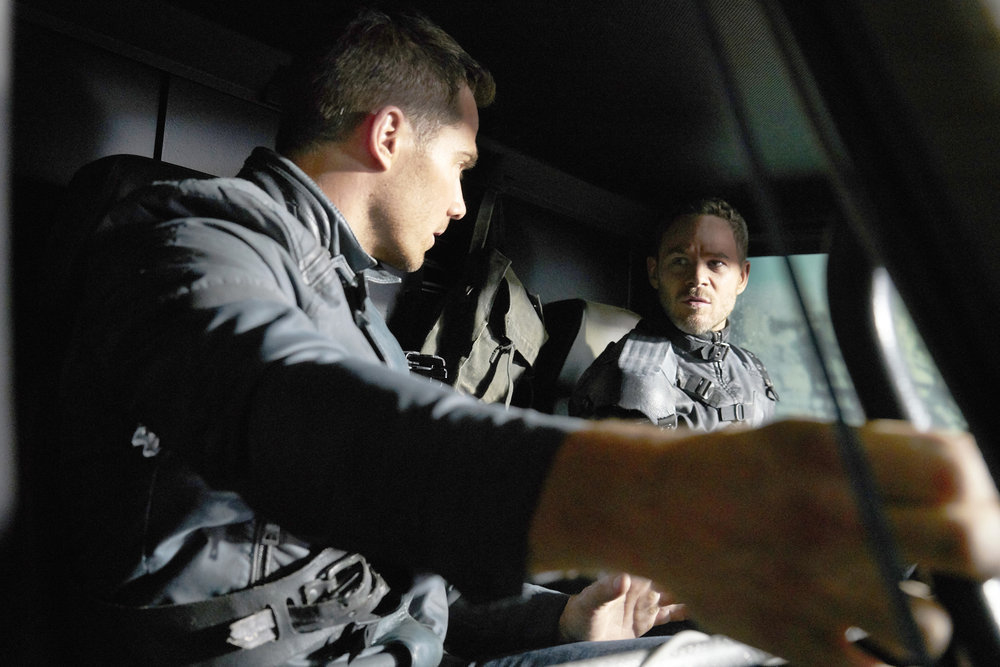 There’s likely a snag or three coming along for the ride, which is the kind of development we enjoy about this show. We’ve also got Pip’s likely “spidery” influences yet to be dealt with. He’s got that little finger twitch going on, so we’ll see how that manifests itself moving forward. But for now, everyone’s aboard Lucy and the separate nightmares they’ve gone through seems to have ended or is likely to end.

One other important part of the Killjoys formula doesn’t get enough love and that’s the work Tamsen McDonough in the role of Lucy. It’s too easy, and too darn lazy, to dismiss the work of McDonough as simply a voice aboard the ship. But Lucy is a character on Killjoys that meshes extremely well with the rest of the cast and McDonough’s work should be lauded as not only complimentary, but as integral to the overall story. She gives Lucy a wonderfully layered personality that matters. Honestly, it’s no small feat and I appreciate McDonough’s work as Lucy and the key elements Lucy plays in the overall storytelling of Killjoys. So, Tamsen McDonough, I salute you.

So, as our beloved crew wings its way back to friendlier skies, let’s take a deep breath and await the other shoes to drop. Feels a lot like we’ve just been warming up thus far and there’s far more fun to come. But in closing this little missive, let me serenade you with one of my favorite interactions of this episode.

“You take ‘this’ with you because she nearly destroyed a galaxy and needs a shower and a nap,” Delle Seyah.
“Do not try me on for size because this bitch be deputized,” Pree.