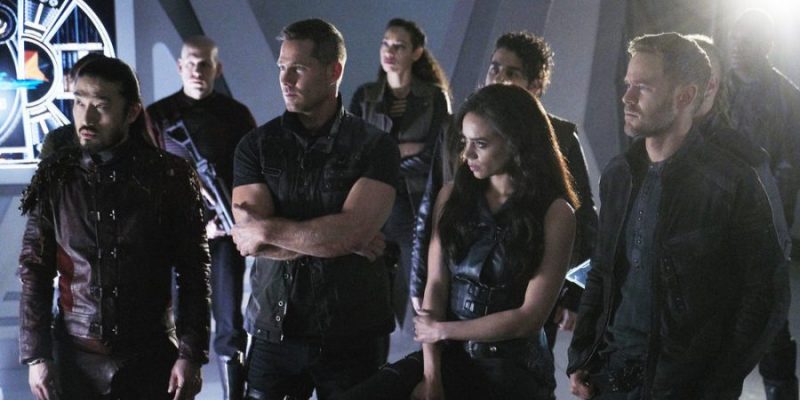 Well, to say I have a bone or two to pick with the Killjoys writers, showrunner and assorted other higher-ups would be an understatement. Killjoys Ep. 409 “The Kids Are Alright?” certainly lived up to its title, but in the process crushed my soul a little as we lost a couple of my favorites.

Curse you, Killjoys creators for your skillful use of death and destruction to leave me feeling low — and exhilarated. I suppose that’s a skill that’s a worthy part of creating something like Killjoys, but for the love of Apollo — both Weej and Pip in the same episode.

One goes “splat” while the other bids adieu in a fiery ball of flame that was the RAC? Oh, the humanity. Oh, the horror. Oh, the sacrifice Weej and Pip makes is so valuable. And given that, I suppose I can stop wailing and gnashing of teeth long enough to let MIchelle Lovretta know this one things — I’m looking at you, lady. You created this masterpiece and now you just steel-toed me in the twig and berries. Damn it all. 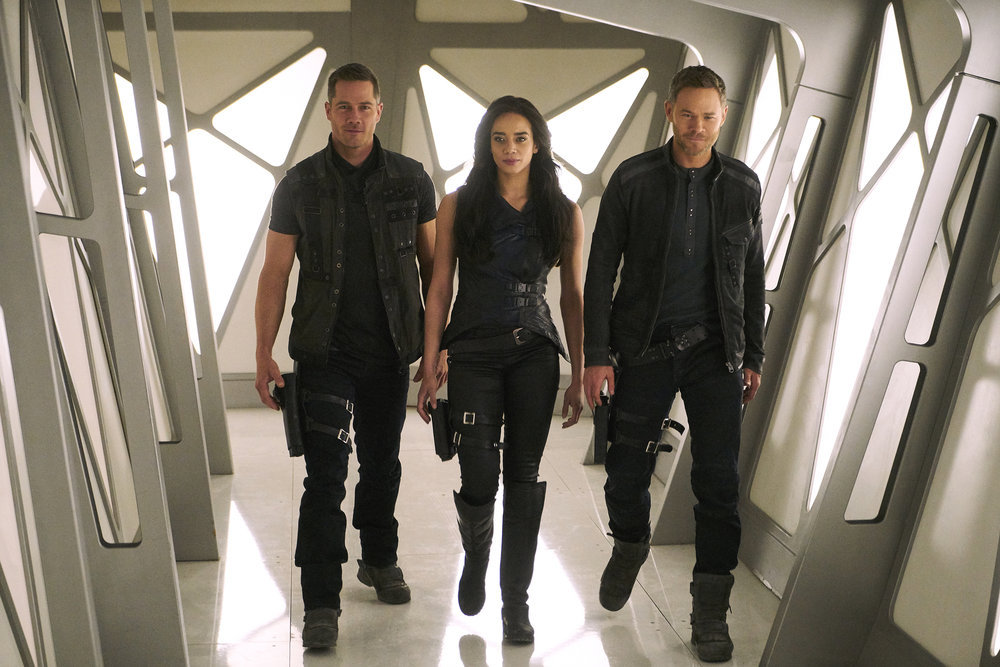 Quite the penultimate episode, wasn’t it? The losses were devastating, but the end game proved successful. It was nice to see Turin in his element — directing the op, going argument-to-argument with Dutch and then, saddest of all, seeing his beloved RAC destroyed.

Pip displayed a ton of courage in the episode, something we’ve not seen a great deal of so far. But it was obvious Pip carried the torch of fatalist into his decision as the spectre of the spider in his brain simply proved the motivating factor in his sacrifice.

Atticus Mitchell did yeoman’s work as Pip since being introduced into the series midway through season 3. An interesting character with a craven nature, he found himself running with Team Awesome Force and the tough-minded nerdy power of Zeph.

His was a good character, one of those great examples of a new face entering the fray and instantly adding something to the mix to make the Killjoys cake even tastier. He will be missed. 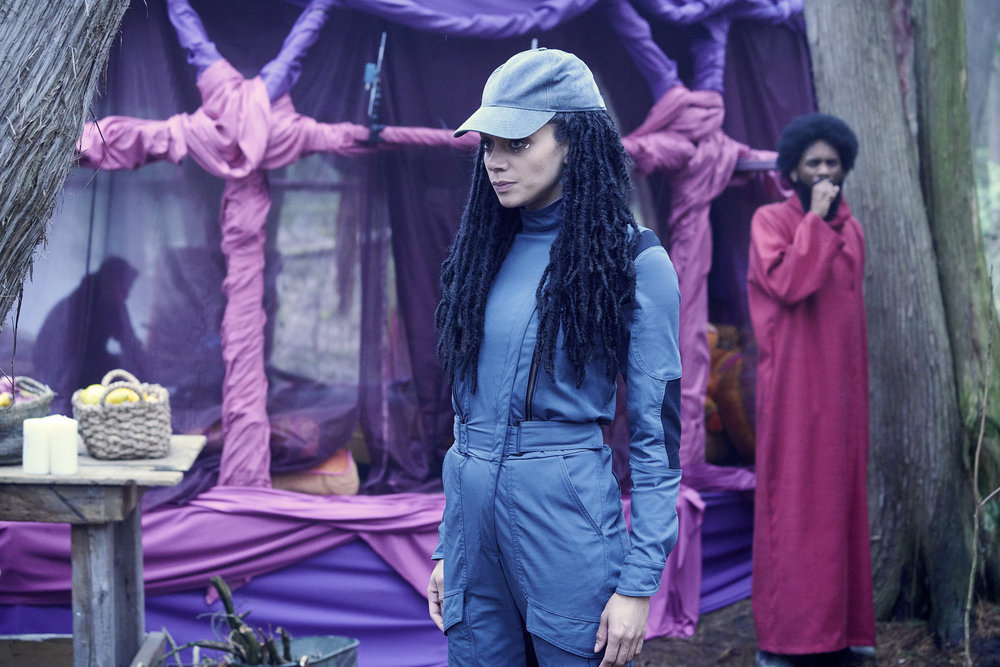 As will “My guy” Weej, who went out in “bug on the window” blaze of glory. Ishan Morris gave us a fun short-term character that provided some innocence and wonder to the proceedings. As a reprogrammed Hullen, Weej eventually touched a spot in Turin’s crusty heart. The phrase “My guys” was a nice little turn that took on meaning and relevance as Weej learned what it meant.

Again, Killjoys does a superlative job of introducing new characters that are so effective at pulling us in. To Pip I say — well done and you’re ability to help Zeph “think” was not only impressive, but pervasive (wink, wink). As for Weej, all I can say is that you were definitely “My guy” from your first introduction into the show. I will miss you, my Hullen friend (sniff, sniff, sniff). Talk amongst yourselves for a few moments, I’m verklempt.

As the title implies, the gang was able to board the RAC and secure the release of the kidnapped children, as well as snagging the green plasma pool that was being created. A pretty nifty feat that needed pinpoint timing and a nice bit of luck. But as we’ve seen, our folks are pretty lucky, aren’t they. It was a sweet op and certainly moves us toward what should be a wild and woolly season finale. 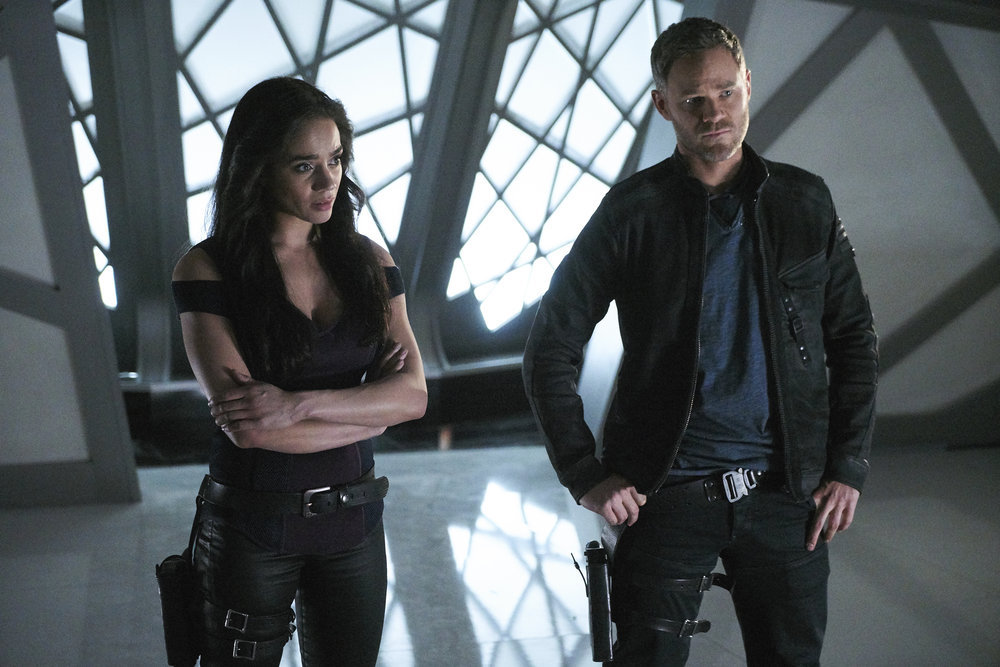 Fancy and D’Avin’s wager on who “offs” more Hullen once the plan gets going (Oh, D’Avin, you were a naughty boy in paying off Fancy…but it was fun) was good stuff. Had kind of a Gimley and Legolas killing Orcs kind of vibe. Adding in Pree and Gared’s heroics was a nice touch as they continue to make not only an attractive pairing, but an effective team.

And let’s face it, few in our universe deliver a line as cooly and stylishly as Pree does. They make a nice point-counterpoint together and that’s great fun.

While I lament the untimely ending of “my guys” Weej and Pip, and completely felt the pain that Zeph was feeling with the loss of her love (Kelly McCormack really brought the emotion, didn’t she? I was moved by her work), the episode hopefully takes season 4 home with a bang after seeing Dutch use the green to switch places with Aneela.

For a while we’ve been seeing Dutch feel the effects of the abuse Aneela is taking from The Lady in the green. But the burned symbols on her back were finally deciphered (Zeph, you’re my kind of thinker) and the game was suddenly very much afoot. Now we head into the season finale with Dutch back in The Green and Aneela — the bodies are the same, but the personalities have changed places — staring up at D’Avin. 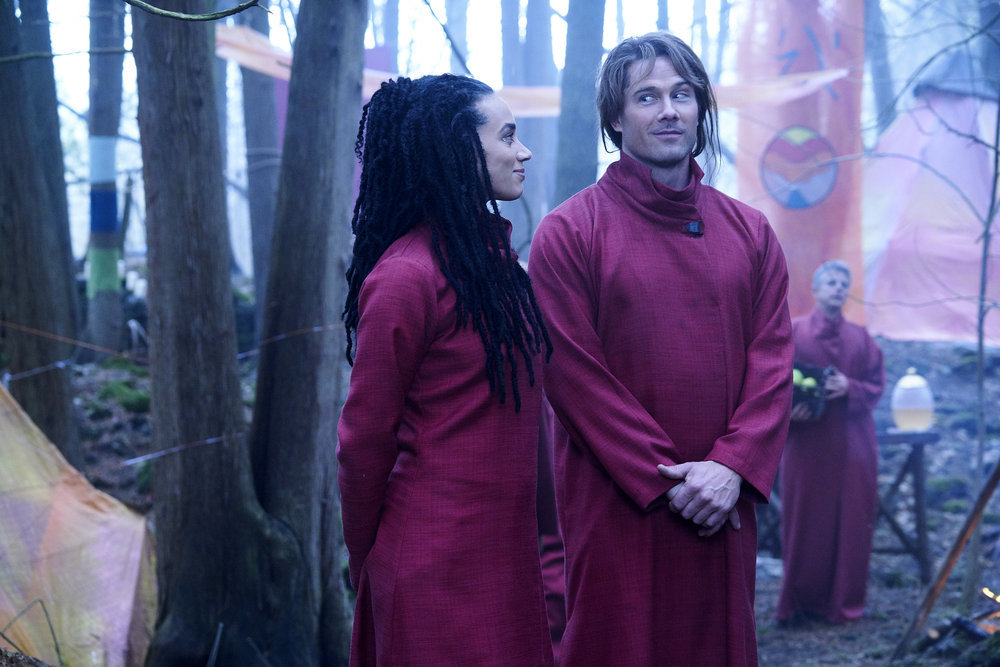 Now what happens? The showdown between Dutch and The Lady would appear to be imminent and it sure seemed as though Dutch was ready for the fray.

When she came to and called to The Lady, it wasn’t in a fearful, apprehensive way, but a strong, determined voice that seemed far more confident than the last time the two met. I liked it. Also liked that we got another fun little glimpse into the talent of Hannah John-Kamen’s dual roles as Aneela and Dutch. It’s the same person playing the roles, but I always seem to have to look closely to remind myself of that. HJK does a marvelous job of giving each a distinctive personality. It’s marvelous, really.

The jaunt of D’Avin and Dutch to the hippie commune was quick little treat. I admit here and now that when I first saw D’Av with the long hair, I thought Ricardo Mantalban from “Wrath of Khan.” I mean, look at it. It’s Kahn’s hair, right?

I also wonder how Zeph is going to handle losing Pip. It’s fairly obvious she blames Dutch at the moment, so I wonder if she’ll have the resolve to do what needs to be done when the time comes. Pip certainly did and I hope she honors that sacrifice with the recognition that Dutch can’t always bring everyone back. Love you, Zeph, but you have to come to grips with it.

So here we are, season finale time. Can’t wait to see how this season ends — while also lamenting the fact that this season is over.