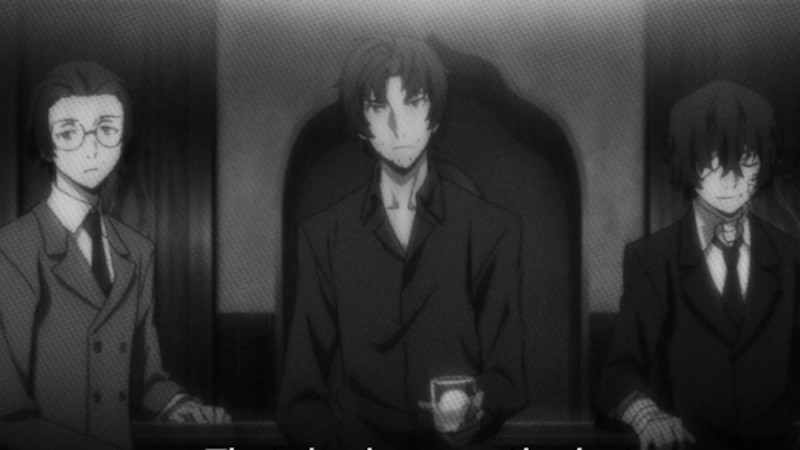 Stalked by a beastly white tiger, Atsushi Nakajima has no idea that the menace lives inside him—a power that catches the attention of the Armed Detective Agency. Using inhuman abilities to combat crime, this team takes Atsushi under the wing of their most eccentric member, Dazai. Together, they tear through mafia-muddled mysteries while enemies keep an eye on the tiger’s lofty bounty.

A darker chapter of Dazai’s past reveals his ties to the Port Mafia. Now, four years later, a gifted group of Americans known as the Guild have challenged the mafia’s power. Atsushi has his work cut out for him while Akutagawa grows more resentful by the day. But when the Guild becomes a threat to all of Yokohama, a united front between bitter enemies may be the only way to save the city. 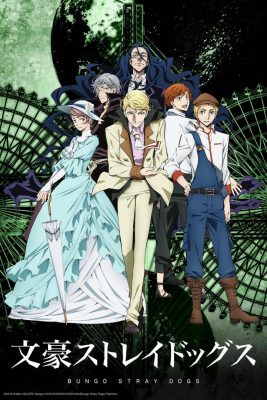 Dazai was an executive in the mafia and feared above all others, including the boss himself. He formed a friendship with 2 other members. One was an accountant of sorts for the mafia, Ango and the other a low level enforcer with a conscience not to ever kill, Sakunosuke. These 3 drinking buddies would find their lives changing in very unexpected ways in the near future. Ango turned out to be a government agent working both sides, which really didn’t surprise Dazai. Tragedy struck Sakunosuke leading to him breaking his vow not to kill and getting killed himself. Sakunosuke’s loss of the orphans and his decent into madness and death hit Dazai the hardest. This lead to him going underground and 4 years later joining the armed detective agency.

The rest of Bungo Stray Dogs season two involves all out war against the Guild, an American group of gifted. This group is the toughest yet for both the mafia and the armed detective agency to handle. When all is said and done the two agree to a level of teaming up to fight the guild. In some cases old teams were re-formed, and new generations formed teams that Dazai hints at the end of the season will be needed to handle the storm that is coming. Season 2 continues the format that made season 1 so much fun. And weaved into all of that is more literary easter eggs.

Watching the final scene would have many upset at the time on whether more was coming. But the good news is, between the recent film Dead Apple and the announcement that a season 3 is coming, there is plenty more Bungo Stray Dogs to be had. The mash up of genre’s in this series makes for a unique show you could watch many times. I have high hopes for season 3 and the Dead Apple film. Studio Bones has rarely ever disappointed me with not only its animation quality, but its plot and story telling.

You can grab your copy over at Funimation or Amazon. The blu-ray release features season 2 on blu-ray and dvd combo, including Funimations digital copy system. Included is the season 2 OVA, textless opening and closing songs and trailers.