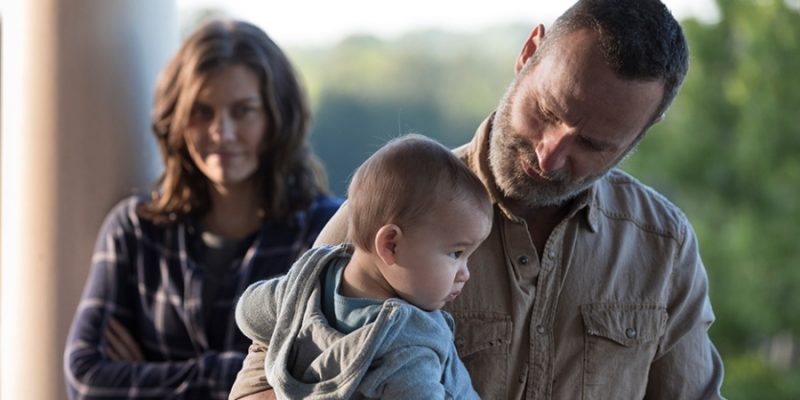 The small “The Walking Dead” real world has grown smaller. Just days before the Season 9 premiere aired, the TWD cast lost one of their own – Scott Wilson. Episode 901 opened with tribute. 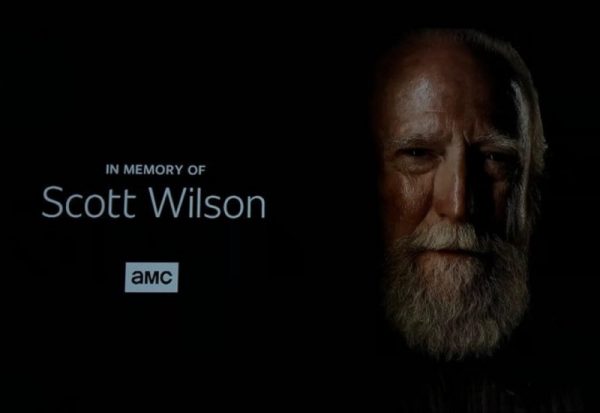 Scott’s character Hershel will appear later in this season as Scott had previously filmed Hershel’s scenes. Our condolences to all those who knew and loved Scott.

A fitting and wonderful full circle moment where art met life was revealed in Episode 901 when we found the TWD virtual world had grown larger in the year’s plus time jump from the end of Season 8. A special addition made his debut – a new Hershel, Maggie and Glenn’s baby boy. I imagine little Hershel and Judith will have significant roles in the TWD new world.

With a new world, you need to have a new opening sequence, right? TWD put together a good one.

Visually, the telescoping effect and shades of gray with only a few flashes of color drew me in. And the black birds – who’s channeling Alfred Hitchcock here? Symbolically, the bare tree filled with those birds budding into a beautiful leafy, green umbrella was perfect. Those crows, or rooks, or could it have been Game of Thrones ravens – what’s the deal there? Weapons sprinkled in all about like the vine-covered pitchfork and Daryl’s crossbow. Then, whoosh, the helicopter buzzes through. Richonne on their horses as the camera pulls us back through a cemetery with someone standing at the gate. A break in music made me think that was it over but, oh, no, there’s more. A motorcycle, a building under repair, a noose, a windmill and those birds again. A walker whose eyes light up and those birds again. An eye and those birds again. A change in perspective to see walkers headed toward the windmill that now looks like it’s behind a fence. “The Walking Dead” logo at the end, filled with the browns, grays and green seen throughout. Excellent!

Cue Rick’s calm voice welcoming us to Season 9. Scenes from the Season 8 finale flashing across the screen as he describes how their world has changed and moved forward in the time gap.

We deserve to live in peace. Negan and the Saviors tried to take that away from us.

Alexandria, the Hilltop, the Kingdom and Oceanside came together to fight for a better future.
We won but not without painful losses.

Today we try to heal, try to forgive. Now the work begins.

Turn and face the strange and examine what exactly has been happening in that new world. I’ve already mentioned little Hershel. Most surprising besides his birth?

Carzekiel. It’s obvious Carol and Ezekiel are in it deep. I mean, Ezekiel proposed! I think she might have said ‘yes’ if he hadn’t done it on horseback. 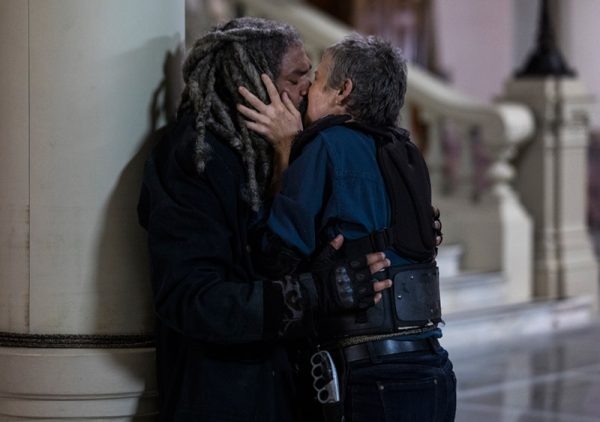 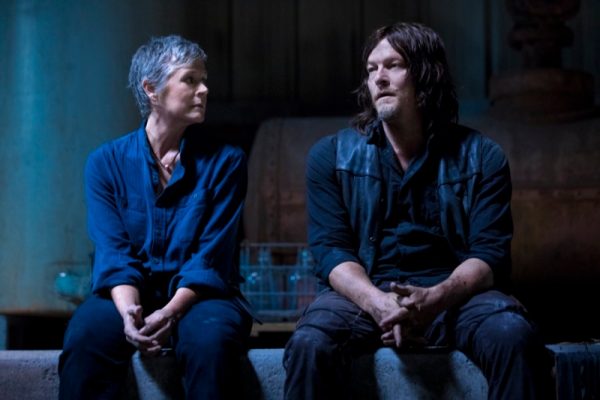 Least surprising? Gregory was on the wrong side yet again. This time it caught up with the weasel (hubby’s characterization) and, in the end, his TV Western-style punishment fit the crime. 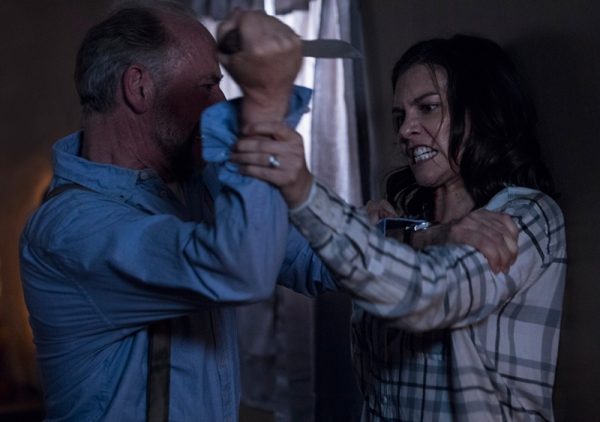 Other surprises? First, quite a few horses survived the hordes of Walkers. Guess they were the fastest ones that outran everyone and thing. Second, that museum run for a canoe, wagon and plow seemed a little overdue. IRL, the American History Museum alone would have been my first foray. It’s a treasure trove of items that would be useful in an apocalypse. 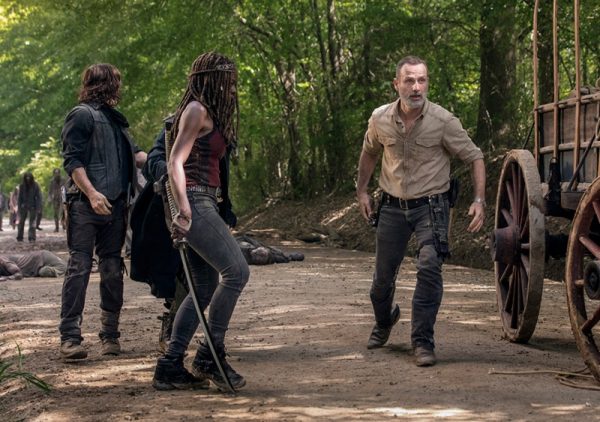 Third, the show seemed just a tad contrived in a few spots. At the museum, surely (no, I didn’t call you Shirley) there was a better way to navigate that glass floor and to secure (hubby calls it “belay”) each other so Ezekiel’s fall would have been more controlled. Then there was Ken going back into the Walker gathering for the horse. That’s just not the way it would have gone down in prior seasons, right?

Loved the new faces! Not intimately familiar with Joe Finn’s prior work but he did an excellent job as Tammy’s alcoholic hubby / Maggie’s attacker. Definitely familiar and delighted to see Zach McGowan and Brett Butler – totally compensated for any disappointment. I’ve been a Butler fan since her “Grace Under Pressure” days and loved her TWD grief-stricken mother Tammy performance. 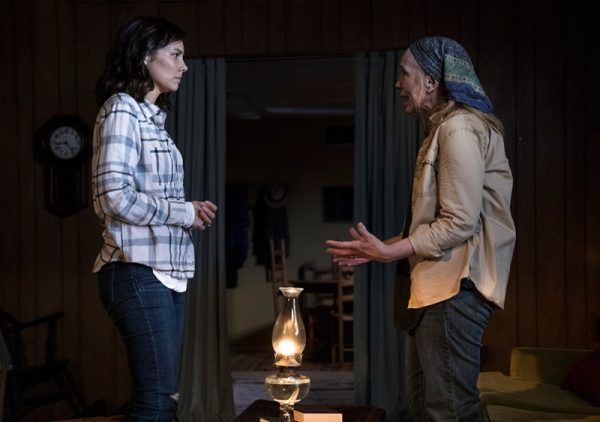 And, with all his disparate roles, who couldn’t love McGowan, my beloved Charles Vane from “Black Sails.” Word is that McGowan’s TWD character Justin is a malcontent Savior who’ll we get to see for four more episodes this season. Reference my interview and Ep 2 stills. Hmmm, wouldn’t it be delicious if Justin was involved in Rick’s exit?! 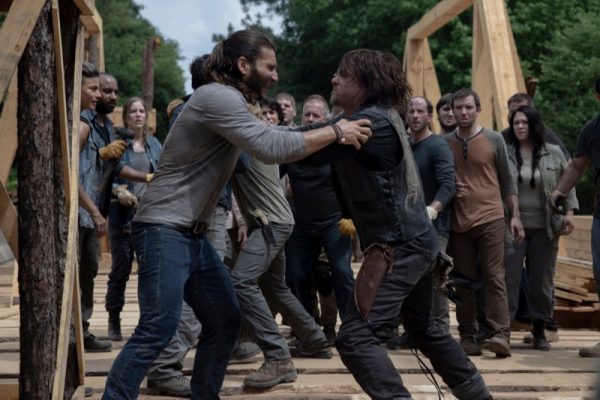 A few other observations… Jesus teaching a class. Jerry in a leadership role. Leaders working together despite the absence of rules. Richonnith (yeah, I think it’s time for triad names) talking a walk through the field and seeing the birds yet again – this time in a sort of murmuration. 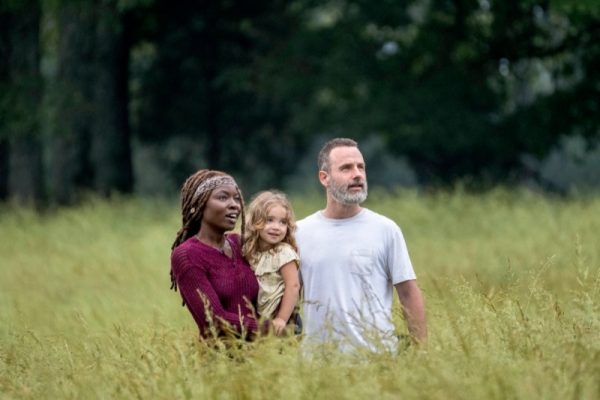 It felt as if we were only receiving glimpses into the REAL heart of the matter – the groups are still separated with no rules. Can’t understand why Michonne is just now bringing up that subject with Rick. That would have been another first in Karen’s apocalypse.

I understand Maggie’s aversion to Alexandria because, well, Negan is still alive there. But why haven’t they all congregated in and fortified some other DC suburb? It’s been a year! I was expecting Maggie to already be in take names, kick a** mode, I guess. Why hasn’t Rick started following her lead? Maybe it’s an accurate reflection of politics in general, like a massive steam ship that takes time to turn one way or the other towards progress.

What’s up with those messages? “We’re still Negan.” Better shut that sh** down quick, Daryl.

No matter the why, the calm opening soon gave way to “an impressive mix of action, horror, comedy and genuine emotion” (Variety) and Negan wasn’t even involved. In fact, he was nowhere to be seen after the opening and I must say I was more than a little disappointed not to get a Negan fix.

Around the Virtual Water Cooler

Negan returns next week. What is Jadis up to, really? Daryl, Daryl, Daryl – he talked a lot, he rode a motorcycle, he’s gonna mix it up with Justin next week. Eugene has a ponytail. Zach McGowan fans speculate about how his role will develop. Norman Reedus describing the premiere as “poetic and tragic.” A reference to McReedus on “Talking Dead” (all the hearts).The continuing Ezekiel-Jerry bromance, not evening trying to combine those two names. Premiere storyboards and concept art. Support for Angela Kang. Greg Nicotero stating he channeled “Logan’s Run” and “Planet of the Apes” as he directed Episode 901 and that “We’re very, very committed to keeping the show updated.” Continuing tributes to Scott Wilson.

My final contribution to the cooler chat? Despite my disappointment that the groups haven’t yet coalesced and secured the new world, it’s going to be fun watching that happen.

Your thoughts on the premiere?