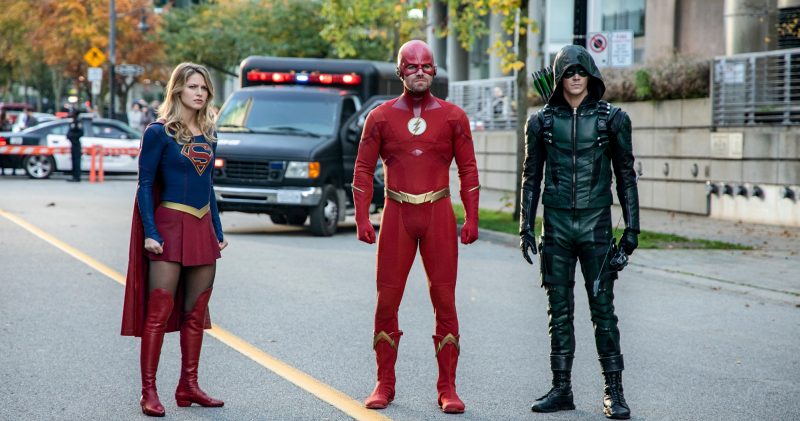 This year’s big crossover event is in full swing and it comes in three parts! The first two were featured as episodes of The Flash and Arrow, while the finale will be an episode of Supergirl. I just loved seeing all of these superheroes together and working toward the common goal of, you guessed it, saving worlds. We’ve got old favorites from Earth-1, Earth-38, Earth-90, and probably some others, too. This review will cover the episodes of Flash and Arrow, so of course we have to start with the Freaky Friday scenario.

It’s not Quantum Leap, but it’s not quite Freaky Friday, either. The first episode kicks off with Oliver waking up in Barry’s home with Barry’s wife, Iris. She acts completely normal and, for all intents and purposes, thinks that Oliver is Barry. Which leaves our dark and broody hero quite confused. He even has Barry’s speed! So he zips over to Star City, assuming correctly that his friend is in a similar state of confusion. 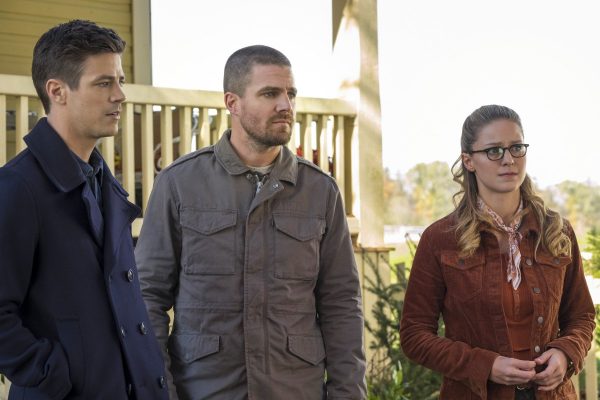 What’s not to love about the two of them becoming one another. I got a lot of laughs out of the two of them trying to act like each other. And the added confusion of Team Flash not believing their body-swap story. This whole first part was packed with a delightful combination of funny to serious to funny again scenes. For instance, the callback scene where Barry as Oliver shoots Oliver as Barry in the back with arrows. It started as a hilarious prank, and then escalated into a “why don’t you understand me?” argument.

As is tradition, our two leading men have to overcome some crisis with their ladies, and this episode was no exception. Even though they have the wrong face, both Oliver and Barry had tender moments convincing their wives that they are who they say they are. Oliver’s declaration of loving Felicity no matter how much they change was very sweet, and Barry’s declaration that Iris is his lightning rod was equally cute. Sometimes you need a sappy moment to counterbalance the action. 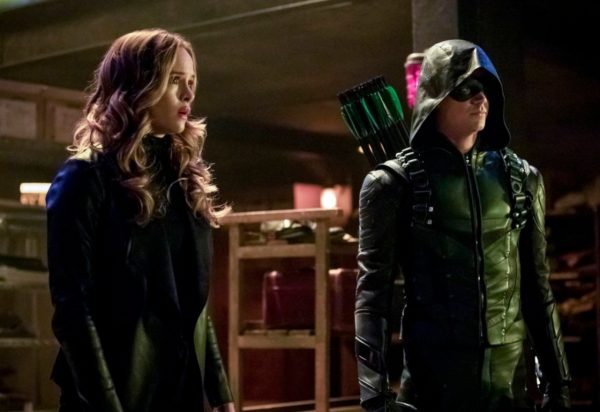 In the second episode of this three-part event, the Flash and the Green Arrow are still in each other’s bodies (don’t get weird) and figuring out how to switch back. Logically, they head to Gotham City and Arkham Asylum so that we can have some fun new crossover mayhem. The Gotham tie-in was a little silly, but it did lead to some wonderful jokes and cameos. Most importantly, it led to Kate Kane, AKA Batwoman. Her time on screen was short and sweet, but we’ll get to her later.

While in Gotham, Barry and Oliver get hit with hallucinogenic gas and see each other’s foes—specifically Malcolm Merlyn and Eobard Thawne. It’s an intense scene that is fixed all too easily, but it does offer our heroes perspective on each other’s lives. Now, I couldn’t help but feel this was redundant because these two have known each other for years. You’d think they would know each other better. It’s almost like (insert your preferred level of snark) they only ever see each other for these yearly crossovers.

Seeing these two working together and embodying each other’s moves and mentalities was a treat, even in the moments where doing so got them in trouble. I have no doubt doing this will cause trouble for them in Part 3, especially since the end of Part 2 has them reeling in a completely different reality. 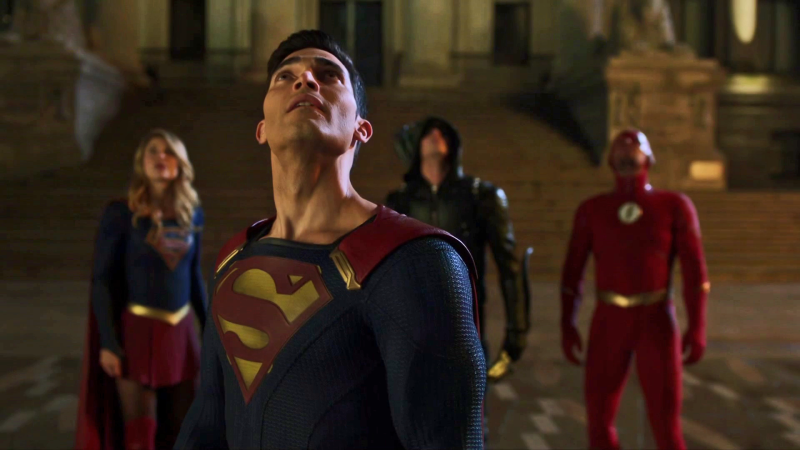 Oliver and Barry need help, and because this is the big crossover, they bring in the big guns. Supergirl and Superman were delightful in this episode, from the first scene on their Earth to the one where Clark says goodbye (for now). And we have Lois Lane, who isn’t in it for long, but seems like a great casting choice.

Supergirl was especially fun to watch interact with the boys since she has rapport with them now, especially Barry. Supergirl makes everything better, let’s just admit it.

Can I take a moment to appreciate that Oliver Queen thinks Batman is an urban legend? *savors moment* I mean, how fun is that? He thinks he’s the original vigilante. Anyway, the team goes to Gotham and they don’t find Batman, but they do find someone just as good. Enter Batwoman, Batman’s surly cousin who just wants them out of her city. She begrudgingly works with them in Arkham and develops mad respect for Supergirl (I’d love to see an episode with just the two of them). 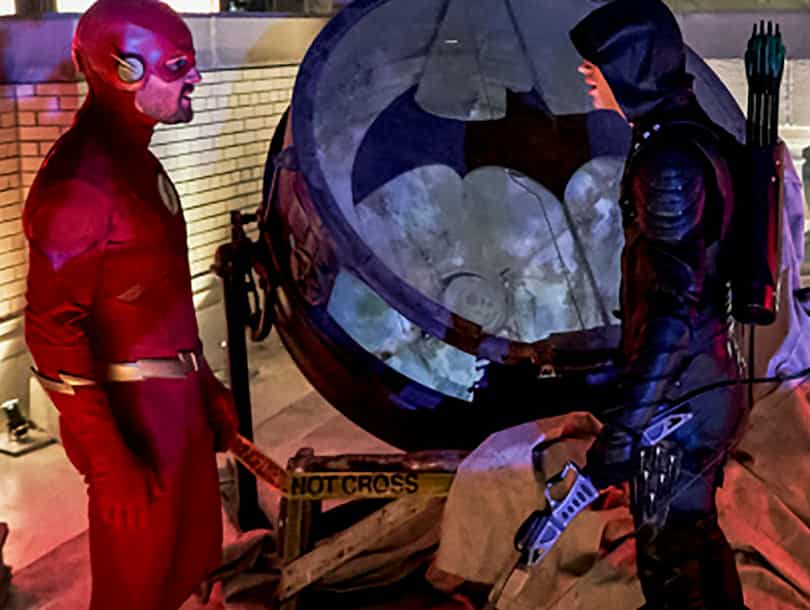 The main villain of this big crossover is the Monitor, but his main role in Part 1, really, was switching Oliver and Barry. His Book of Destiny played its part, too, as the team collected information on it and how to get things back to normal. The Monitor wasn’t all that formidable in this episode, but that’s because he was barely more than a background thought, biding his time. He’s in the midst of a chess game and has to make sure his pawns are in order.

The Monitor takes a bit of a backseat to Dr. John Deegan in this part of the crossover since our heroes are primarily focused on getting the book from him. Deegan is more of a disciple to the Monitor, but he poses enough of a threat in this episode for the superfriends. The real kicker comes at the end of Part 2, where the Monitor truly reveals himself and his power. He was simply testing everyone, as he tested many other worlds, to see who might be worthy. Turns out Earth-1 is special in that they got farther than the others. Which sounds great—until he rewrites reality and strips Barry and Oliver of their abilities.

He at least gave them the correct bodies this time, so…yay? 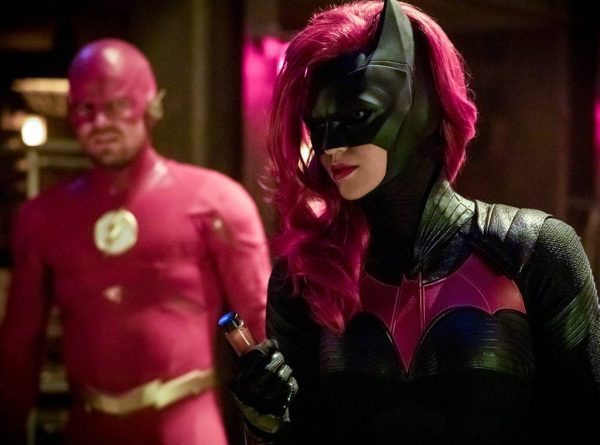 These first two episodes of the crossover were super fun (with the super friends!). I’m sure the finale will be very exciting and set things in motion for the future (and perhaps offer a little set up for the crossover next year). Watching everyone come together with their banter and drama and shenanigans is something I enjoy immensely, even when the plot gets a bit weak. These crossovers also give the main heroes opportunities to grow not just in their personal lives, but in their heroic lives as well. And corny as it sounds, they all need each other to grow and be better people.

What did you think of these two episodes?