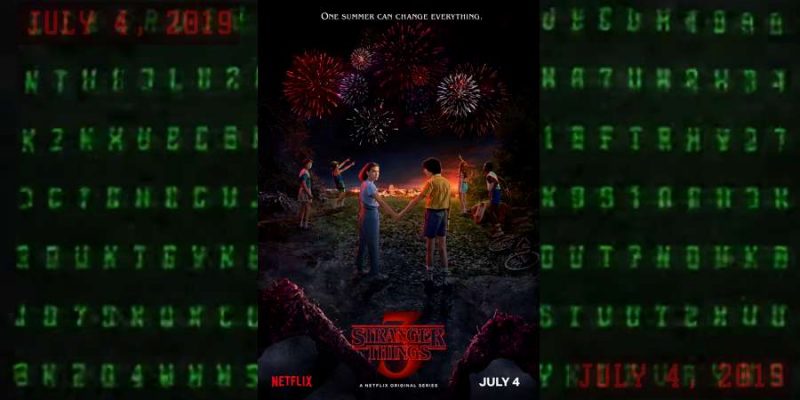 NOTE: As with any preview, this post and the information within may contain SPOILERS for Stranger Things season 3. Proceed at your own risk.

We’ve known for over a year that Netflix would be bringing back our favorite binge for a third round. What we didn’t know was exactly when it would return. Fans have been dying to know when season three of Stranger Things will debut. Now we have our answer: July 4, 2019.

In the vein of “be careful what you ask for”, Netflix has given us a creepy announcement video. Released just before midnight Central Time, the short looks like something off an old VHS tape; I would expect nothing less.

Before I go into a cursory description of what’s shown, how about we watch? Here’s the brand new video everyone will be talking about and picking apart.

What the heck did you just see?

The short begins with a promo from fictional local station WIYZ Channel 5 for Dick Clark’s New Year’s Rockin’ Eve 1985. Perfect timing, if not 34 years too soon. A clip of the show is interrupted by a green computer readout. Random letters appear, but the words “WHEN BLUE AND YELLOW MEET IN THE WEST” are highlighted briefly.

The festivities return for a moment, but are again interrupted by computer code credited to Lynx Corp. The camera zooms on text that says “SilverCatFeeds” then it flips back to the end-of-year celebration. Moments later we hear a voice that shouts, “Eleven!” Soon after the screen rotates on its side and turns into color bars.

The color bars give way to a brief shot of fireworks while people off-screen sing, “Auld Lang Syne”. That quickly fades to simple computer music playing the same song while the screen shows, “ONE SUMMER CAN CHANGE EVERYTHING”. The next shot displays the date of July 4, 1985 in the same green that then counts up to July 4, 2019 and turns red.

Of course the music also segues into the Stranger Things title song, at first in simplistic PC music then the actual rendition. And that’s all we get for now, but keep watching because I’m sure there will be a lot more to come. Also, I’m sure there will be plenty of fans who take the time to dig up any clues and Easter Eggs in this video.