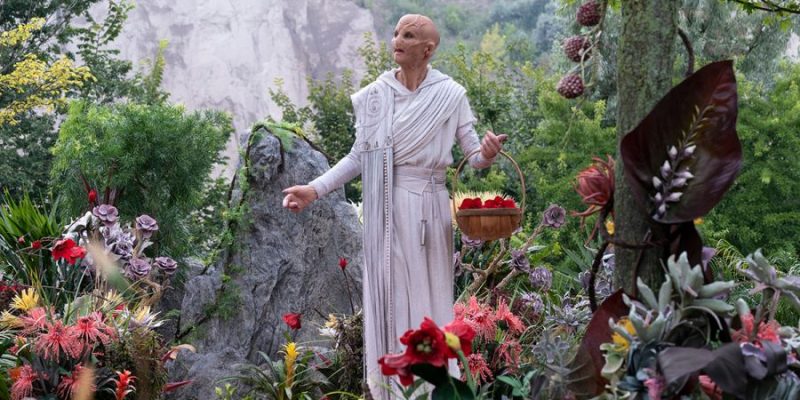 I can’t say as I’m sorry that Star Trek: Discovery found an excuse to bring Saru back to his home world. And after watching Ep. 206, I can only say the trip was well worth it. This Saru-centric episode was the latest stone in the foundation that Saru has been laying on the path to self-discovery and, ultimately for his people, self-determination.

As always, the work of Doug Jones is superlative in giving us a range of emotions as he confronts the changes that are occurring within him, but also about the occur on his home. It’s time for the sheep to stand up to the wolves at their door. And with Saru’s arrival, that’s exactly what we get on his home world as everything about the Kelpians, and their tormentors the Ba’ul, is about to change..

Having successfully come through the Vahar’ai and survived (and not been driven to madness), Saru has a whole new world opened up to him. The fear that defined him is now gone and the reality of his situation on his homeworld was made clear to him. We got a hint of what was to come two weeks ago in the episode “An Obal for Charon,” and if you were able to watch the Short Trek episode called “The Brightest Star,” you got a sense for where Saru came from and, very probably (at some point) where he would end up. 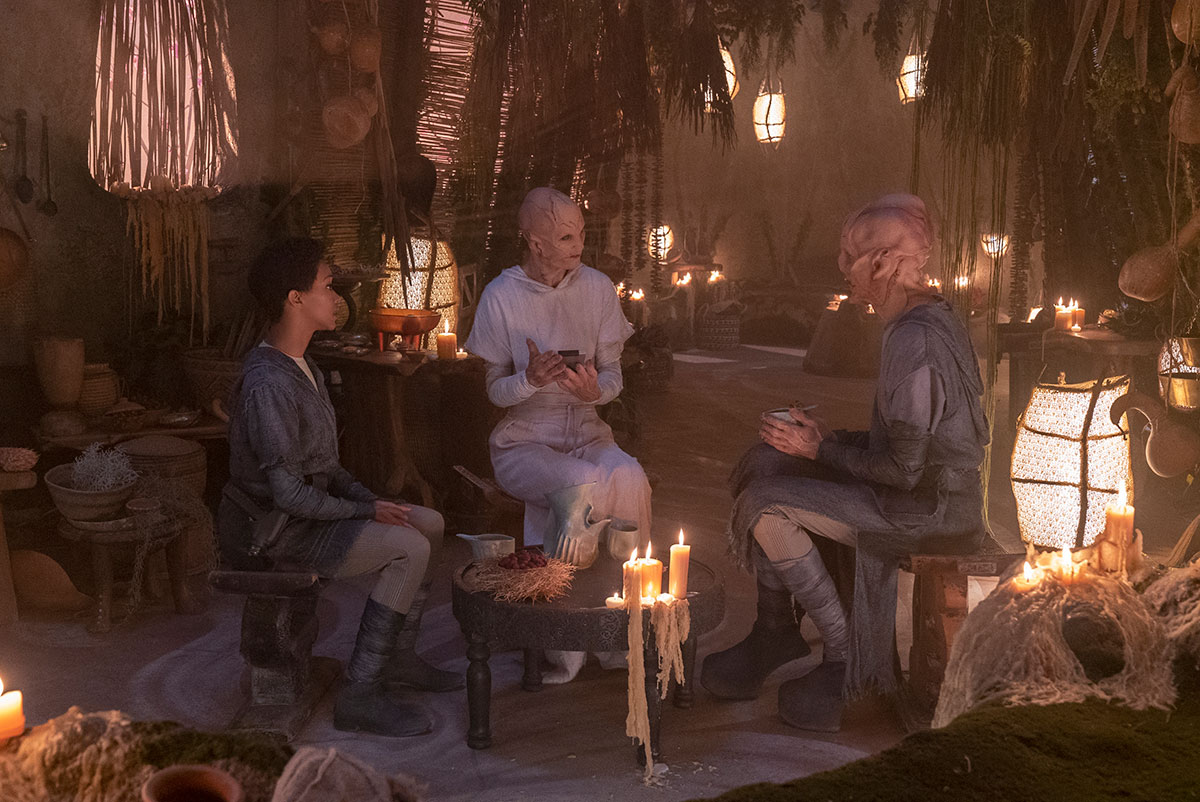 Well, thanks to a strange signal that emanated from his home world, Saru and the rest of the Discovery, in the interest of pursuing any lead that might provide clarity to the Red Angel mystery, decided to investigate. The scenes where Saru, soon on the planet with Michael Burnham, interacted with his sister are terrific. There’s a pain and poignant vibe that runs through it. Again, the work by Sonequa Martin-Green, Doug Jones and Hannah Spear (who plays Saru’s sister Sirannah) is tremendous.

There’s so much that’s going on emotionally under the surface as the trio talk about what’s happening and the truth that the Kelpians have long been denied.

It’s at this point that you can really sense Saru’s pain, but also a growing commitment to freeing his people from the yoke of the Ba’ul. Captain Pike senses it to, doesn’t it? Several times he tips his hand that he’s not sure Saru can keep it together with regards to his people and the Ba’ul.

Personally, I really enjoyed this focus on Saru and the internal battle he faced as a Kelpian activist struggling with his Star Fleet duties. Again, Doug Jones has lifted this character to tremendous heights developmentally and I’m delighted to see the writers, show runners and all those behind the scene giving our Kelpian some room to really strut his stuff this week. 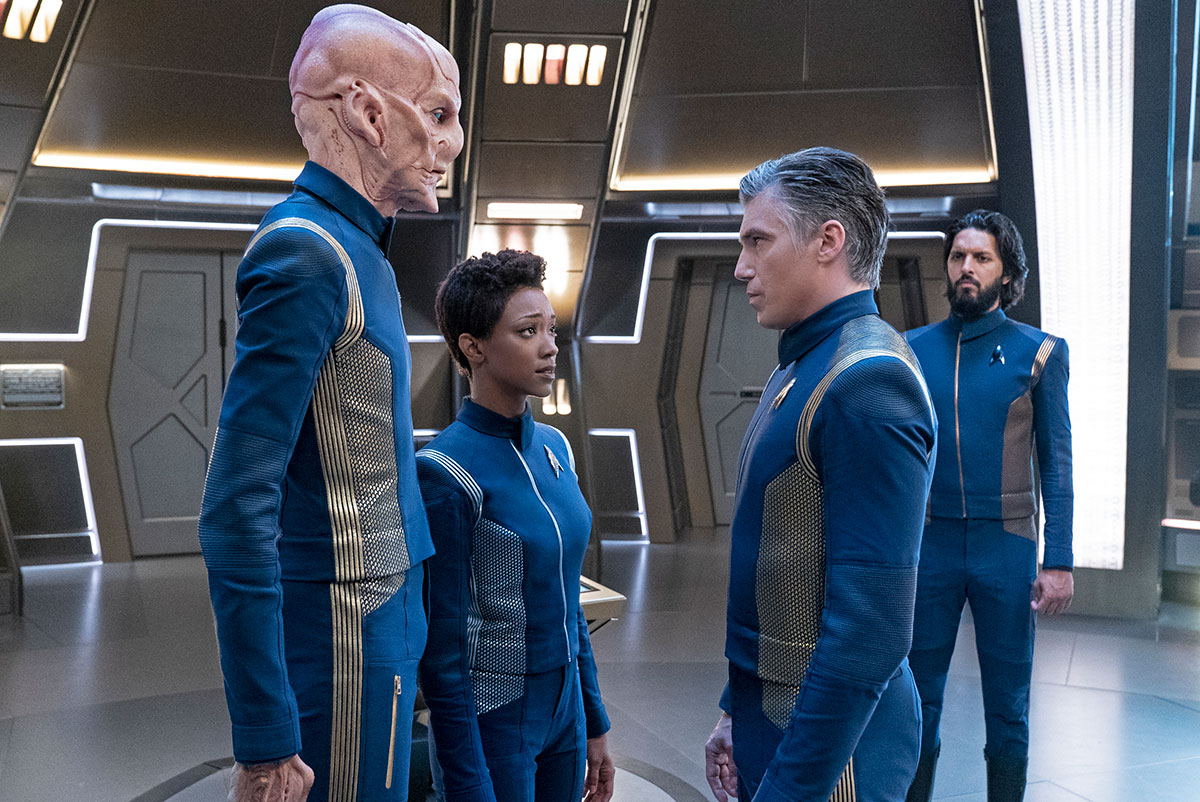 Saru (Doug Jones), Michael (Sonequa Martin-Green) and Captain Pike (Anson Mount) talk about their contact with the Kelpians and Ba’ul.

What’s interesting is the little twist we get as the episode plays out — the Ba’ul were once the oppressed of the Kelpians. They subjugated the Kelpians to make sure they never again committed the sins against the Ba’ul that were apparently part of their distant past. It was a nice tie-in to last week that information the dying entity had transmitted to the Discovery in the last episode was used to decipher some of the mystery between these two species.

In the end, Saru gave himself up to the Ba’ul to avoid bloodshed, but would make an impressive stand on the Ba’ul structure that truly signaled the start of the rebellion. The Ba’ul may have been more technologically advanced (as well as being very unattractive in a pile of weeds falling into an oil vat type of ugliness), but an enraged Saru made short work of their little probes. Fairly impressive sight to see Saru, unshackled from fear as he’s been, unleash a little destructive force. I enjoyed it.

In the end, with the Discovery’s help, Saru manages to bring on his people’s Vahar’ai en masse, effectively removing the shackles of fear they had been programmed to obey for centuries. It was important that Saru noted that for both species to find comfort in this new world the Kelpians and Ba’ul would now inhabit, that trust would be hard to establish. I had a feeling that Sirannah, no matter how attracted to Saru’s new life she was, would choose to stay. And she did. An interesting character and well-played by Hannah Spear. I hope we see Sirannah again somewhere down the line. 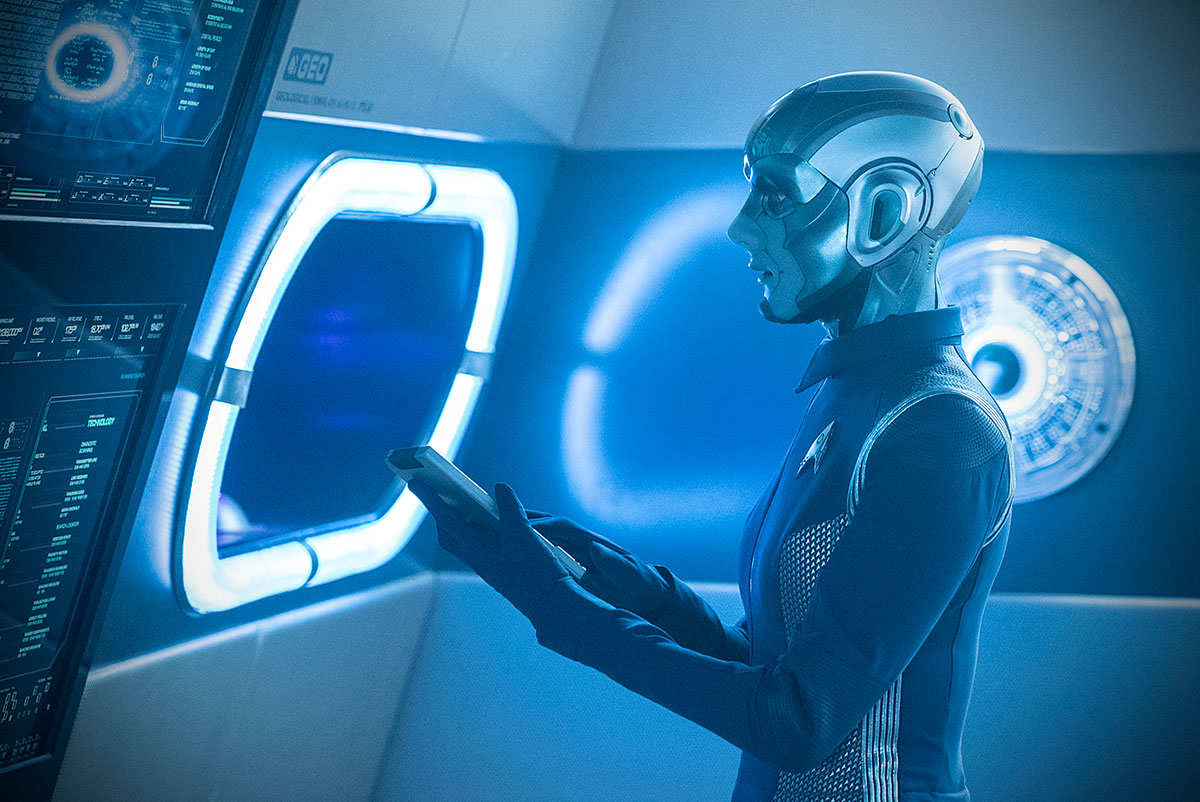 Lt. Commander Airiam (Hannah Cheeseman) works on a solution to the Ba’ul threat.

One again, the work of Doug Jones, even under heavy makeup, is inspiring and a joy to watch. As Discovery searches for Spock and the connection of the Red Angel — it was interesting to see it appear to Saru and his sister at the end. Interesting, isn’t it?

Is this a time-traveling being imposing (seemingly good) its will on others as Ash Tyler suggested. Are the wings merely a piece of equipment that helps the entity do it’s thing? Captain Pike and Ash Tyler have a quick, yet insightful discussion about what the Red Angel might be thanks to Saru’s enhanced eyesight and a more detailed look at the entity. I tend to agree with Pike that Ash and Section 31 are coming from a place of paranoia – though Tyler makes a good point about the recently completed war.

It changed people, he says, though we know he’s pointedly talking about himself. Sill, the Red Angel remains a mystery that it appears only the appearance of Spock can presumably shed some light on. Judging by the previews for the next episode, we may finally see our bohemian Spock at last. I’m looking forward to it. 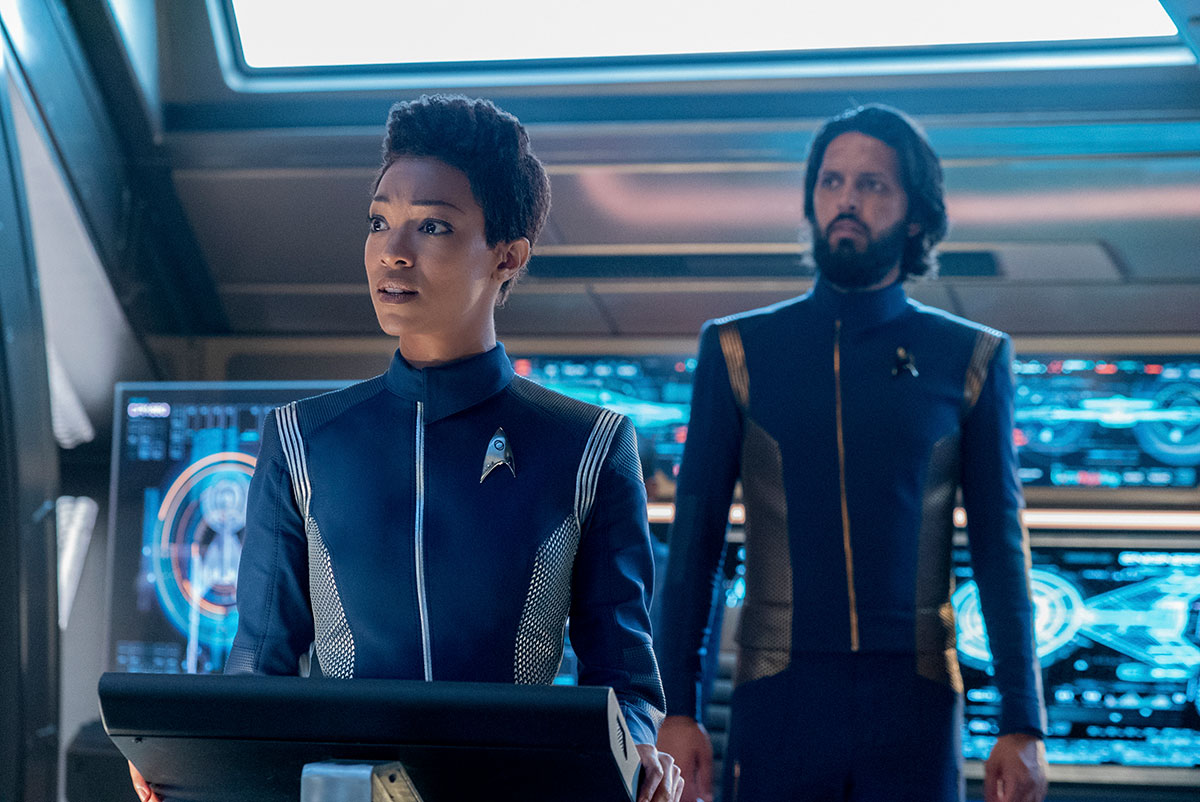 It’s interesting that while Saru is undergoing a physiological change, we see Hugh Culber also experiencing changes. It feels there’s a little bit of blind joy working through Stamets at the return of his love. But Culber knows things are different. It all feels different for him. He’s essentially been reborn from new, even the doctor calls him “pristine.” I have this funny feeling that all will not be as it was with Hugh Culber (and by extension, Stamets). There’s still something to be played out there, I’m fairly confident in saying. But in the short term, it’s plenty fine to see Hugh back amongst us.

We’re six episodes in and I’ve got a few observations. Anson Mount at Captain Pike works really well for me. He’s a terrific blend of experience, humor, pragmatism and no-nonsense that I think makes a captain worth following. Mount has been a great addition. I have also enjoyed that the show has turned into more of an ensemble creation than what the early indications were, where it would rest on the shoulders of Michael Burnham primarily.

Love the way Martin-Green combines the Human-Vulcan vibe within the character of Burnham, and particularly like the way this character can be a subtle assistance to other characters who step to the forefront a bit. It feels like Star Trek: Discovery has grown stronger as the collective has been allowed to express themselves more and more (Tyler, L’Rell, Tillly, Saru, etc.).

There’s a lot of good work being done on this show by characters, both large and small. Personally, I’d love to find out more about Lt. Commander Airiam. She (It) seems to be an interesting being in the Nebula mold. This is one of the things that Star Trek, at its best, has always done best, surrounding the main players with characters that we get very interested in. Again, that collective work just makes this show that much better moving forward.