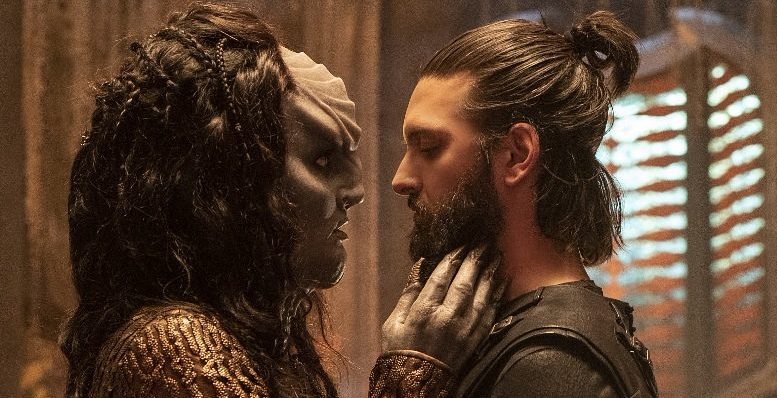 “The freaks are more fun.” And with that, my adoration for Emperor Philippa Georgiou returned intact and with total joy. In fact, episode 203 of Star Trek: Discovery, “Point of Light,” delivered unto my waiting fandom arms two of my favorite characters from season 1 — Georgiou and Ash Tyler (replete with beard and man-bun).

As the search for Spock heats up and the quest to decipher the meaning of the “red angels” continues apace, the appearance of Tyler and Georgiou, as well as L’Rell, lifted my spirits for a show that has been a delight from the outset in season two. The visuals are, as in season 1, stunning. The subtle personalities of the characters continue to progress and mesh, and our Captain Pike seems to have a rakish charm that has the scent of Errol Flynn about him. Not a bad comparison by any stretch.

But we’ll get to all of that in a moment. For now, I’d like to revel in the reappearance of old friends and favorite characters. 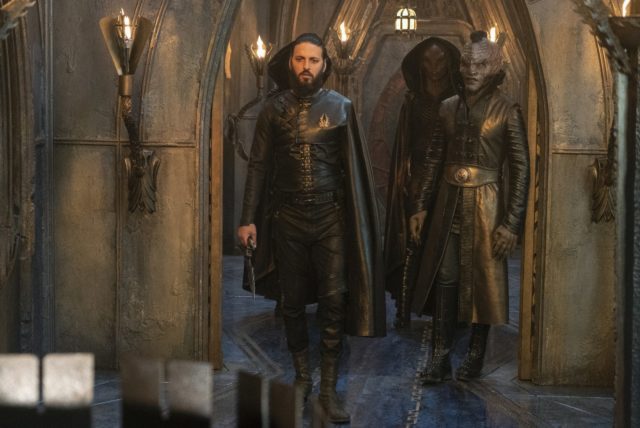 But first, some style comments. Turns out that with the war against the Federation over, the Klingons have decided to let their hair down — literally. The Klingons of Star Trek: Discovery can grow hair and in season two have decided to do just that. L’Rell has a full bloom of follicles, complete with braiding — a very viking-like look.

She’s not alone, as we’ve got some man-buns and some long pony-tails, etc. flowing in the hallowed halls on Qo’nos. It’s a good look, though I’m sure that in the Star Trek fandom there’s plenty of unrest at yet another twist in the Klingon look. Move on.

Here’s my take on that – the Klingons throughout the many Star Trek works have been that wonderful palette with which creators and costumers have chosen to do their most inventive work. In short, the Klingons are a continuing creative endeavor within Star Trek. Hence, bald a year ago. Hair this season. I’m good with it.

Aside from the hair issue within the Klingon empire, the big news is the L’Rell is the chancellor and she’s, of course, facing push-back on many quarters. She’s entrusted Ash Tyler as her torchbearer and the two are still trying to figure out their relationship and the Voq factor. But there’s another big reveal — Voq and L’Rell conceived a child, one that L’Rell and her followers want to keep hidden. Of course that plan goes awry as another house tries to use that information to depose L’Rell and her “human spy.” 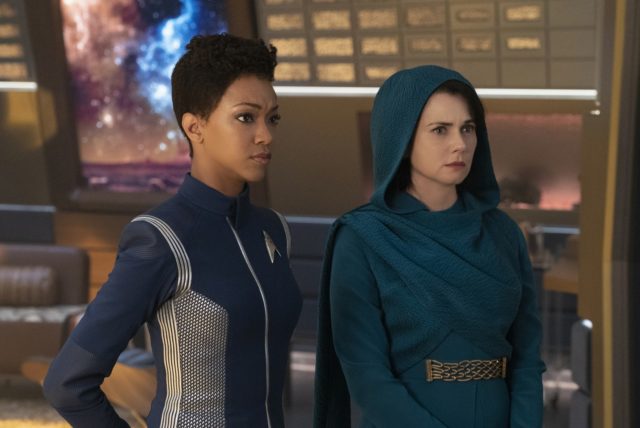 This being a Klingon endeavor on all fronts, all hell breaks loose and we get ourselves a fun little Klingon-on-Klingon donnybrook to not only save the child, but save L’Rell’s chancellorship and Ash’s life (It didn’t help that Ash sometimes communicates with Burnham about what’s going on on Qo’nos – and that doesn’t stay secret.).

It’s interesting to see L’Rell try to unite the Klingon houses. Much as we see today, the bias, prejudices and bad blood of the past aren’t easy for people to get past. And that hatred, that enmity, continues to fester within the Klingon Empire (well, not empire yet). The political machinations turn even on the Klingon home world, something that L’Rell will have to continue to navigate. In the end, Ash and L’Rell get some unexpected help to win the day, save the child and destroy an enemy.

And that’s where we get Philippa Georgiou arriving in a blaze of deadly glory, and the introduction of Section 31. There’s just something mesmerizing and tingle-inducing about the work Michelle Yeoh does with this character. Almost a gleeful joy in the task at hand. I nearly clapped when she revealed herself in this episode.

Fortunately, she arrives, saves the day, helps cook up a plan with L’Rell to save her chancellorship, Ash’s life and the life of the baby. It’s classic manipulation and political expediency, the perfect plate for Section 31 to serve up its usual shadowy fare. On another note, got to see some early iterations of Klingon weapons. Interesting to see them in what is supposed to be the earliest Star Trek and then know they will change via the other Star Trek offerings we’ve had. I just thought it interesting. The Bat’leth was certainly different. 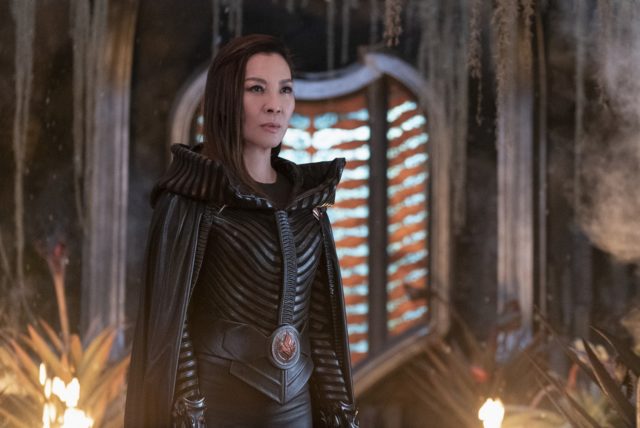 I suspect that Section 31 is also involved in the Spock case and the hunt for missing files (which Spock’s mom, played with sensitivity and toughness by Mia Kirshner, stole and gave to Burnham to decrypt). Turns out, Spock allegedly killed three doctors and escaped the Star Base he was on and is now on the lamb. The officer in charge mentions “people on the case,” which leads me to believe Section 31 is involved.

To me this is an intriguing and exciting addition to the Star Trek story for this season. Section 31 is such a shadowy organization within Star Fleet that it often works outside the rules and social mores of The Federation – a true “get it accomplished” organization that puts protecting the interests of The Federation above compassion, honesty, fairness, etc. Should be interesting when they clash with Burnham, Pike, Spock and the rest of the band.

And it looks like Ash Tyler is going to be joining the Section 31 party. At least Georgiou certainly thought so when she assure her superior, Leland, that “he’s in.”

So, it turns out Tilly has contracted a space fungus that is channeling a childhood memory of a friend, bringing May to hallucination reality. I felt sorry for Tilly as she struggles to begin the command training class while “May” is continually at her side delivering a running commentary. It’s not only distracting for Tilly, but makes her question her own sanity. Tough to see Tilly stand up and say she “quits” the program like she did. I felt for her knowing how badly she wants this. But, with the help of Burnham and Stamets, we discover that the spore drive may have produced a spore that was immune to the inoculation process. 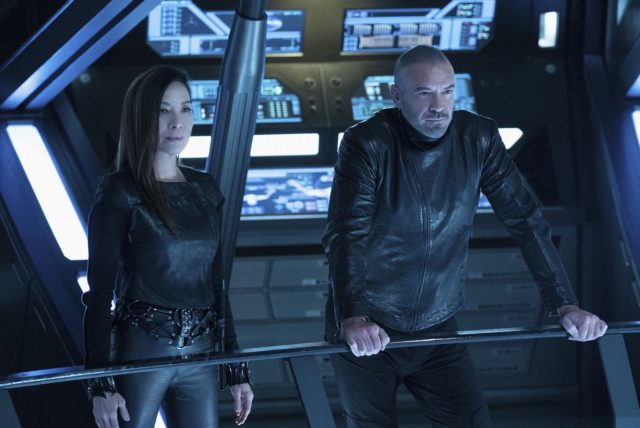 May tells Tilly she’s special and that she needs Tilly. She also thinks that Stamets is the captain and that he flies in the spore drive seat. I’m curious to know what this might mean going forward. What does May need and how is Stamets’ use of the spore drive related to the whole plot? I don’t think getting rid of the fungus is going to be the end of this little storyline. There’s something else going on here that we haven’t had the curtain pulled back on yet.

And what of the “Red Angels,” which seem to be the focus of Spock’s current issue, and seem to show up to either save or help others save those in need? Have you noticed that? Red Angels would appear to be the harbingers of help on some level in every case. What are they and why have they appeared? I’m hoping we get our hands on Spock before the Federation does (or Section 31). I need answers.

So the “emperor” has returned and it should surprise no one that Section 31 is where she landed. Spock is on the run, Tilly, Stamets and Saru are trying to figure out what the parasite is all about, L’Rell is consolidating power, and Captain Pike has a sense of humor. Toss in the Klingons growing hair, you’ve got a pretty interesting episode. That’s certainly my take on “Point of Light.”