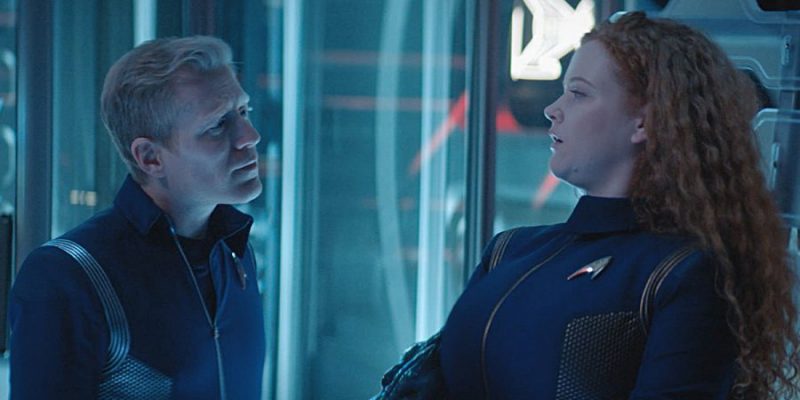 Plenty to unpack in episode 204 of Star Trek: Discovery, wasn’t there? But while a dying space entity attempts to communicate with the Discovery, there were a couple other things that really stood out for me in this episode, not the least of which was the entire story arc of The Blob that would devour Tilly…then do it again. All this in an episode called “An Obol for Charon.” Interesting title, and one that certainly was meant for Saru, but also could have an eye toward Tilly.

The reference of “An Obol for Charon” is undoubtedly referencing the ancient Greek tradition of placing a gold coin (or obol) on the mouth of a dead person to give to Charon to pay for the crossing to the underworld. And while Saru managed to avoid paying that toll, the jury is still out on just what Tilly’s fate may be moving ahead, having been sucked into the blob that would be May.

So before we head off in the direction of Saru, Burnham, Pike or the others, let’s stay in the spore drive section of the ship and the very interesting trio of Paul Stamets, Jett Reno and our own Sylvia Tilly, who begins the episode with the blob encasing her forearm and, apparently, making her a bit high. Anthony Rap, Tig Notaro and Mary Wiseman were a true and vibrant delight as they traded barbs, ideas and delightful lines with and at each other. 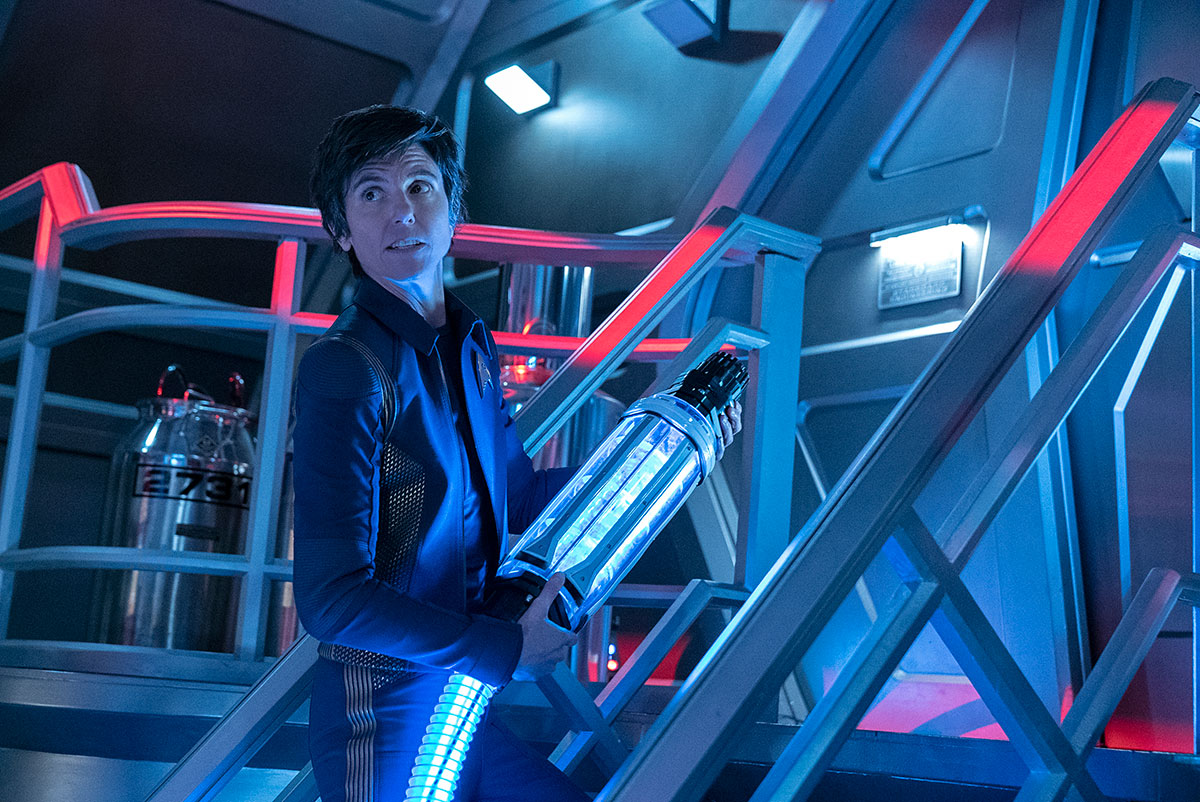 I knew that Jett Reno and Paul Stamets were going to be an interesting pair when they finally met, but what we saw in Ep. 204 was better than I could have expected. And with Tilly in the spore drive chamber adding her two cents to the running chippiness of her fellow crew members – it was a good time whenever the story jumped back to them. Their work and chemistry in this episode was a pleasant and enjoyable surprise.

Unfortunately, Tilly’s May-infused blob on her arm suddenly begins to expand and engulf our heroine. So, despite their edginess towards each other, Reno and Stamets work together to try to extract Tilly from the blob. It works — up to a point. That would be the point where our blob seems to able to help the gang take a trip and never even leave the farm…er, room.

Everybody must get stoned, it seemed. I’m still unsure what the blob, through May, really wants through Tilly (and Stamets). Though free for a while, as Stamets and Tig regain their senses, it would seem that Tilly is back in the belly of the beasty blob.

My applause meter for Rapp, Wiseman and Notaro certainly buried the needle this week. Where and in what Tilly is in remains an intriguing mystery, one I’m now even more anxious to see resolved and solved. Until then, however, Tilly is stuck in the blob. Come on Stamets and Reno, let’s get our rescue mojo working…for Tilly. For us all! 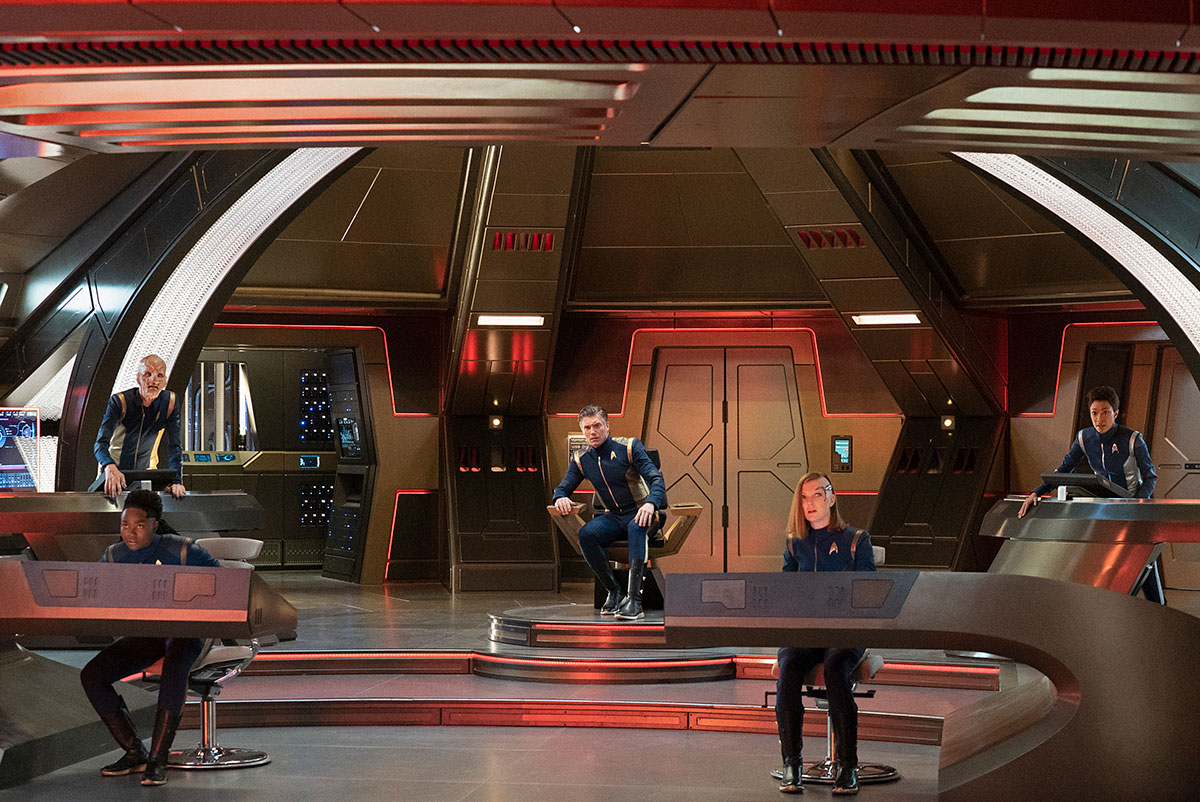 The bridge crew ready for action in episode 204 of Star Trek: Discovery

In the rest of the Star Trek: Discovery realm, away from the blob, the search for Spock continues and just as they get a warp signature to follow, the Discovery is caught and detained by an entity that, as we find out later, isn’t attacking them, but trying to impart its vast knowledge to someone before it dies. Of course no one realizes that until later when Saru puts 2 and 2 and 2 together, which is pretty amazing considering our beloved Saru is dying.

That’s right, I said he was dying. Notice, however, that I didn’t say he died. Turns out that Saru’s people have a physiological condition that becomes onset when it is “their time.” That condition arose and became worse for Saru during this episode. We see him steadily decline and offer a little bit of wistfulness as the time comes closer – particularly with Burnham at his side reminding him that he’s family. It was an interesting dynamic between Burnham, Saru and this affliction, eventually ending with a positive and empowering conclusion.

But in the midst of all this, Saru figures out just what the entity that is holding the ship at bay wants. It simply wants to find a repository for its incredible library of information gleaned over millions of years. Once the message has been deciphered and properly sequenced, the download is made as Saru lays on his deathbed with Burnham at his side, hands clasping each other. 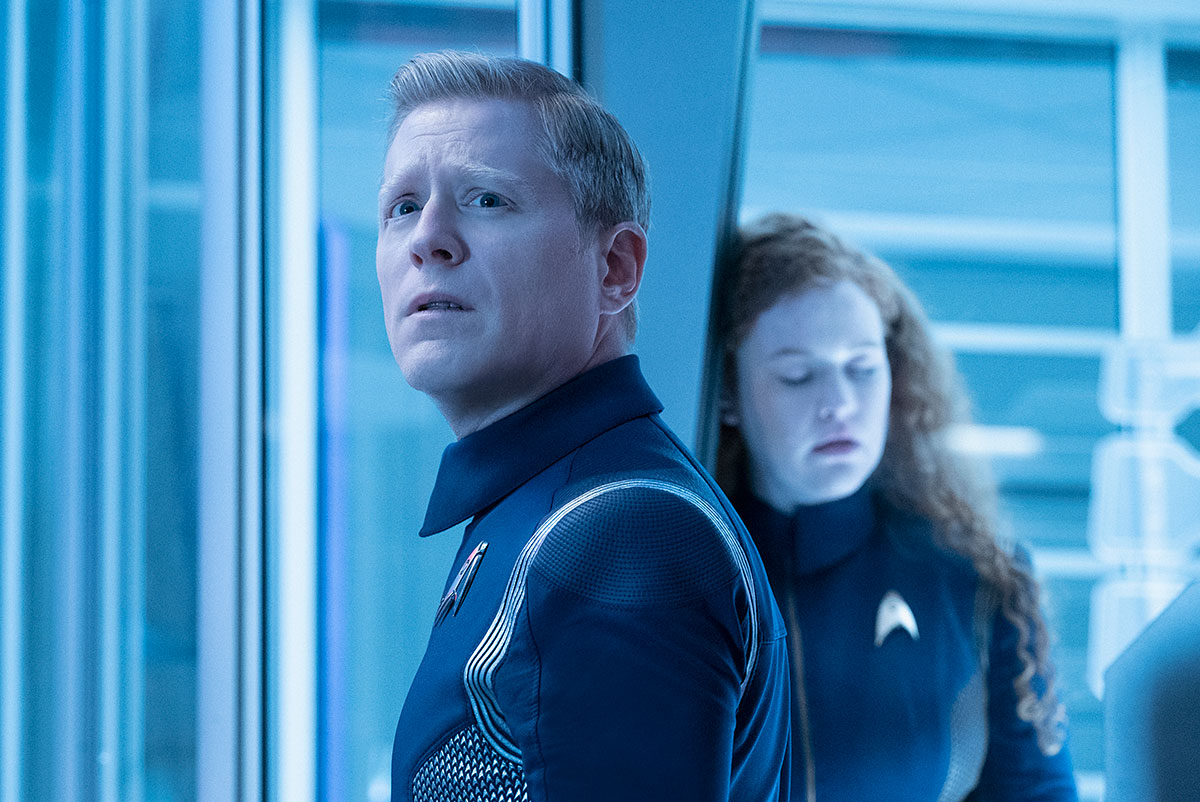 But the ritual that signifies the end can’t be performed. That which Saru said had to be done, couldn’t be done. And with it, we learn that Saru is a species that, as it turns out, can overcome the physiological calling that his people so willingly give into back on his home world.

The revelation that the truth he’d been taught his whole life was a lie was obviously an empowering moment. I think he feels it not just for himself, but for the Kelpians as a whole. He wanted Burnham to ignore General Order 1 after his death and visit his world. Now that he’s survived, I’ll be interested to see if he continues to push for that – for his people to know that they don’t have to accept that which has been a lie for centuries. That his sister can have a different future than their history would have them believe.

I’ve said this several times, but I don’t think there’s a character on Star Trek: Discovery that has come as far from a development standpoint as Saru since the initial episodes. He’s become increasingly empathetic, mentally strong, inventive, and empowering for others. He’s a consistently positive source of reinforcement for Tilly and, despite a rocky start, found a “sister” of sorts with Burnham. Doug Jones (as well as writers, etc.A) has done a tremendous job of helping this character take these fantastic steps forward in one-plus seasons of Star Trek: Discovery. I’m a tad in awe of Jones, to be honest. If you read this, Doug, just sayin’. 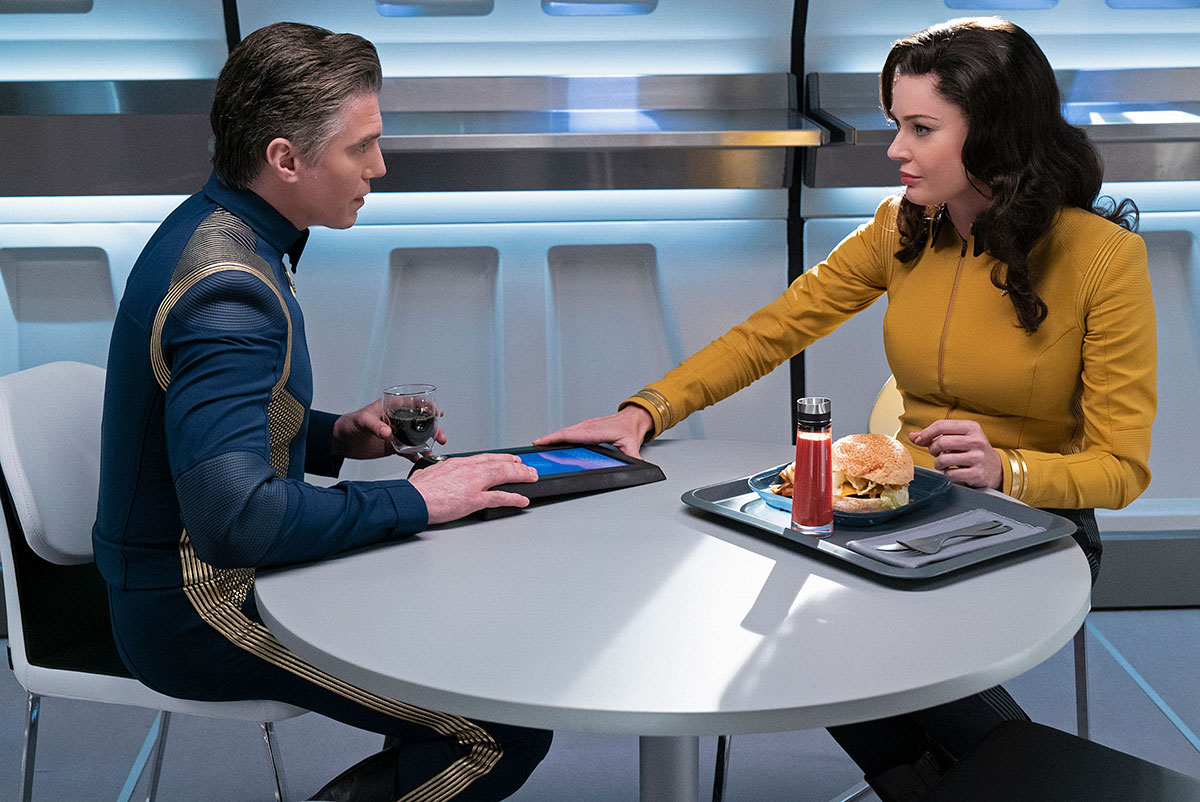 Captain Pike (Anson Mount) and No. 1 (Rebecca Romijn) talk during her visit to the Discovery.

What really was fun about this episode was the arrival of No. 1 from the Enterprise. Originally portrayed by Majel Barret in an episode titled “The Cage” in the TOS. She was a strong and sure command presence in that episode all those years ago and I was delighted to see Rebecca Romijn portray those same characteristics in this now-classic character.

Obviously a capable and talented command talent on her own, the loyalty to Captain Pike was obvious as she provided some valuable information. Could we see her in command of a starship within the Discovery timeline? So much is unknown about this character.

As noted, this character showed up in one episode of TOS and now, all these years later, the circle is somewhat complete. No. 1 is back. I truly hope that her return won’t simply be a one-off kind of thing. I want to explore this character a lot more and hope that the writers and show runner will feel the same. Romijn made a very positive first impression on me with her introduction and I’d like to see this character get a lengthy run within the series moving forward.

An interesting episode with a lot of parts interweaving. I am anxious for the Discovery to catch up to Spock and see where that will go. Burnham was encouraged by Saru to mend things with her brother, so that should be interesting. I’m looking forward to what happens.