The Umbrella Academy Season One Review

Let it be known that this review was written while blasting The Umbrella Academy official soundtrack.

When I first heard about The Umbrella Academy being turned into a television show I definitely had some concerns. What if Gerard Way and Gabriel Ba did not have a say? I was worried they would not be able to do the comic book justice. It’s super comic-booky there is no doubt there. Lastly, what if it would just utterly suck like so many adaptations of things I love have? I am sitting here today after a weekend binge and a re watch of the first episode happy to report that I am blown away by this show. They did everything right, they kept it to the comic in so many parts and yet they changed so much and did so beautifully.

The show runner, Steven Blackman, took so much care with the source material and also added a whole new dimension and level to these characters I absolutely adore. There were some things that I was a bit wary about and one major change that I was kind of “meh” about. We’ll talk about those later on. First, the characters.

“He got seven of them”

The seven special children born on the same day with extraordinary powers. Each of these characters were brought to life so beautifully on the screen. I was really excited to see the diversity of the cast when they announced them. The fact that they are all adopted meant they could be from anywhere in the world and the show definitely rocked that.

The Umbrella Academy consists of: Number 1, aka Spaceboy, aka Luther Hargreeves. Number 2, aka The Kraken, aka Diego Hargreeves. Number 3, aka The Rumor, aka Allison Hargreeves. Next we have Number 4, aka The Seance, aka Klaus Hargreeves. Mysterious Number 5 aka… Number 5. Number 6, aka The Horror, aka Ben Hargreeves. Lastly, Number 7, aka The Ordinary One, aka The White Violin, aka Vanya Hargreeves. Each of these children were born with something that sets them apart from the rest and Sir Reginald Hargreeves sought to bring the power out of them and make a super hero team. The show did an incredible job with each of their personalities and sticking true to who they are!

The leader of the pack is Number 1. He has always strived to please his father and in doing so he pushed the rest of his family away from him. The biggest difference from the comic to the show was that Luther’s body. In the show they just surgically attached him to a gorilla body, in the comic was more like a suit. I gotta say, he was my least favorite in the comic and it held true in the show too. I understand because he is supposed to be kind of bland and never quite reach his full potential, so in that regard he was great.

It was a sad realization when he discovered Hargreeves had sent him to the moon for no reason and Tom Hopper definitely delivered the sadness in that moment. I also got pissed off at him with the whole Vanya thing. The fact that he, in that moment, was so much his father was a great example of his upbringing. He just wanted to repress her and not even treat her like a person. That made me so mad!

They did very well with his relationship with Number 3 too! To all those people screaming “incest”, pay attention. THEY ARE ADOPTED! They share absolutely no blood relation. Bah. The Rumor is my favorite character in the comic book, well it’s a toss up between Rumor and The Seance, but she isn’t my favorite in the show. However, they do a great job with her character. She’s witty and broken and struggling to get her daughter back after using her powers without thought. I enjoyed what they did with her. Not to mention the fact that they actually had Vanya cut her throat! I was so surprised and happy they actually took that step. 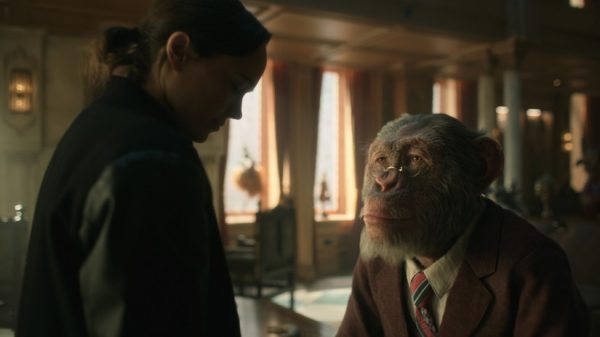 Vanya and Pogo. Courtesy of Netflix

Diego was definitely a different character. He was so much more sympathetic in the show and giving him a love interest helped soften him more. In the comics he absolutely hated his mother, in the show he was her biggest advocate. He was so sweet to Mom and I loved that. It was really sad when he disabled her, but Pogo saved the day and fixed her. I think that dynamic helped Diego become more important of a character. Instead of being brash and just annoying, he was brash with a heart. Not to mention he was funny too! All of the characters were funny in their own right.

Vanya was another big deviation from her character in the books. She had a love interest also and was given a lot more depth and back story. They truly showed how evil Hargreeves was to everyone, but especially to her and having Allison be the reason she was “ordinary” was heartbreaking. It was a great addition though and it really gave more dynamic to their relationship.

My biggest issue with Vanya’s story was Leonard/Harold. He was a creep from the get go and it sucked that she was caught up in him. I understand that they were showing that broken homes lead to broken relationships and they needed a “maestro” character to help orchestrate the apocalypse. Having a creepy stalker-esque guy might not have been the way to do it, but I understand that going the comic book route would have been too over-the-top. I think especially because she was so easily caught in his trap, but then again they did do a good job of having the family push her further and further to the edge. I was heartbroken when they killed Pogo, even though I knew it could happen, but it was necessary to show that she had completely gone over the edge. 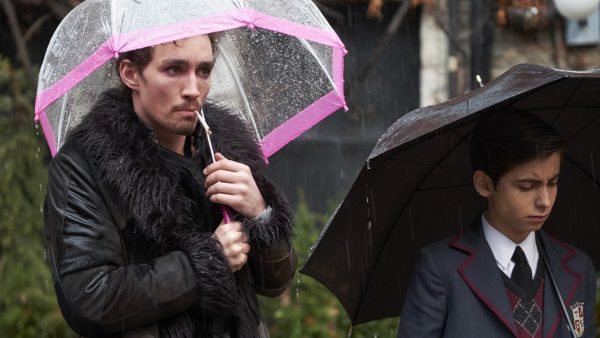 Klaus and Five in the rain. Courtesy of Netflix

Without a doubt Klaus is my favorite character in the show. He is so charismatic and hilarious; he really brings an excitement to the show. They did very well with him too, but they changed his powers just slightly and, at least at this point in the show, he does not possess people. It was cool that they had Ben at his side too, since Ben is rarely talked about in the comic. In the show Klaus is more of a Ouija Board in the fact that the ghosts can talk through him, it’s really interesting and I like it a lot.

His whole story is sad though. He medicates so he doesn’t have to listen to the demons in his head, but even when he’s heavily medicated Ben is there. It is so sad.  I’m also super happy they sent him to heaven. They really pulled a lot from “Dallas” for his story, especially the Hazel and Cha Cha encounter and Vietnam. They changed a lot about his encounter with Vietnam. I genuinely liked this story better. They really gave him more of a heart instead of just having him go and open up a club and have a baby. Coming back a totally changed man was great character development. Everything they did with him; Vietnam, having Ben “come back to life”, actually sending him to heaven was awesome! I could talk for hours about how much I love Klaus, but I’ll spare you. 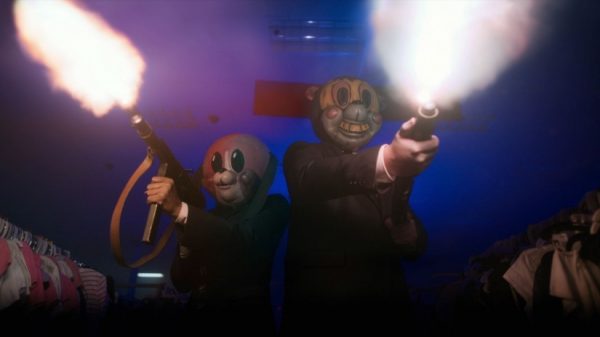 My other favorite character is Number 5. This is one character that is better than the comics! Seeing him come to life maybe helped, but the way they portrayed him in the show was better. He was snarky and sarcastic; it was glorious. They made him a badass killer and went back to what I loved about him in the comics. I’m also super happy they added Dolores! It’s the little things that just make it great. His employers and the Kennedy assassination were different, but it was necessary to make it more interesting. They did a lot of stuff from “Dallas” with his story too, but it worked well with the show.

Hazel and Cha Cha were marvelous, but I will say they were probably my least favorite deviation from The Umbrella Academy comic. They were great and all sugared up the whole time, but the depth they gave Hazel was a bit weird. I understand that they needed to add something more to keep them in the show longer, but the romance was underwhelming. I didn’t mind it and it was kind of cute, but just underwhelming. My biggest complaint was the lack of action with them. In the comic they are mass murderers and they have zero feelings. In the show they had a lot of fun scenes, but the reason I loved them so much in the comic was because of their sheer lack of care about anything other than death and sugar.

Also, the fact that Cha Cha did not eat a donut while walking away from Griddy’s exploding was really a missed opportunity to show more of her sugar-addicted side. I guess they wanted to make it more serious. The actors they got the play Hazel and Cha Cha were amazing though. I really loved them and they did an amazing job giving them more life than they have in the comics. They had some golden scenes and some fun character development, it was just different from what I was expecting. 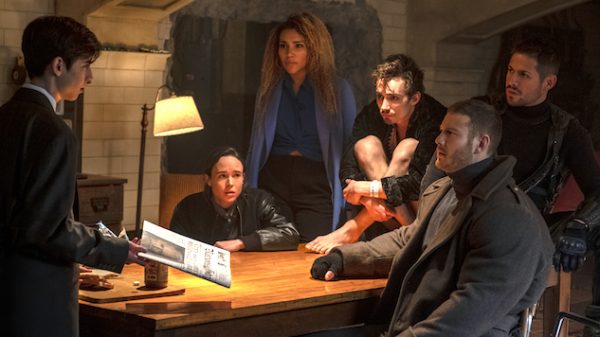 I will praise The Umbrella Academy until I am blue in the face. There is so much they did very well. They stuck to the source material, yet they changed so much and added a ton of depth. The Umbrella Academy show is its own living and breathing entity and I love that Steve Blackman did such an incredible job. There was such a different layer to everything and each actor brought an incredible portrayal to the screen.

Everyone felt well done and thorough and no character felt less loved than the others. Pogo was perfect and gorgeous and they spared no expensive making this show look and feel beautiful. All of the great easter eggs and having Gabriel Ba’s drawings sprinkled throughout the show brought a huge smile to my face. I have plans to watch The Umbrella Academy many more times and with that freaking ending I cannot wait for season two!