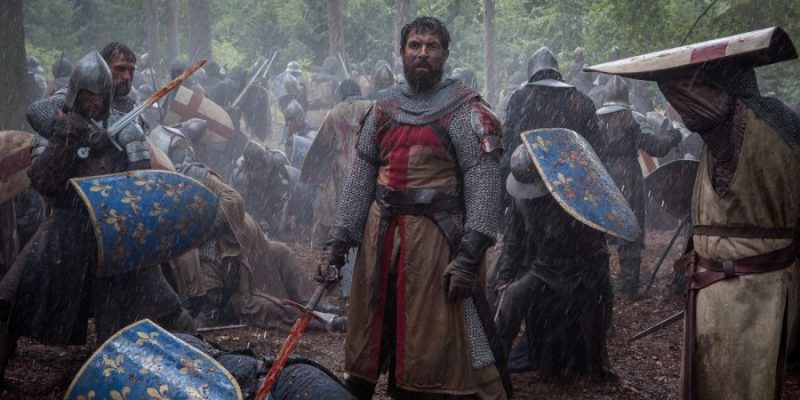 When last we saw Landry and his Templar brothers, they were engaged in a cacophony of battle with King Phillip, Gawain and a band of mercenary soldiers brought on by an illicit love affair and pregnancy. The King was repulsed, but not before letting Landry have a look at his sword piercing the queen’s belly.

But as episode 201 of Knightfall demonstrated, even the best sword thrusts don’t always find the mark. Landry’s love (Queen Joan, remember) died, but the child she carried lived and that’s where we pick up in season 2 – Landry entrusting Tancrede with the safety and long-term welfare of his child.

Tancrede will, of course, attempt to secret the child to a good home where it will be raised without the hint of dishonor Landry’s name may bring to is. As we see later, that plan may not be as well-conceived as it needs to be. I sense the baby as lure.

As it turns out, the events of season 1 have left many of our favorites in Knightfall at their lowest ebb. Landry has been crushed, rolled and crushed again emotionally in an episode titled, “God’s Executioners.” For Landry, Gawain and even King Philip, the devil inside each of them has brought them to a place of not only struggle and pain, but of self-loathing and angst.

Landry spent the early part of the episode begging for another chance as a Templar and finally getting one as an initiate in another Templar stronghold in France. In other words, he’s starting from scratch. 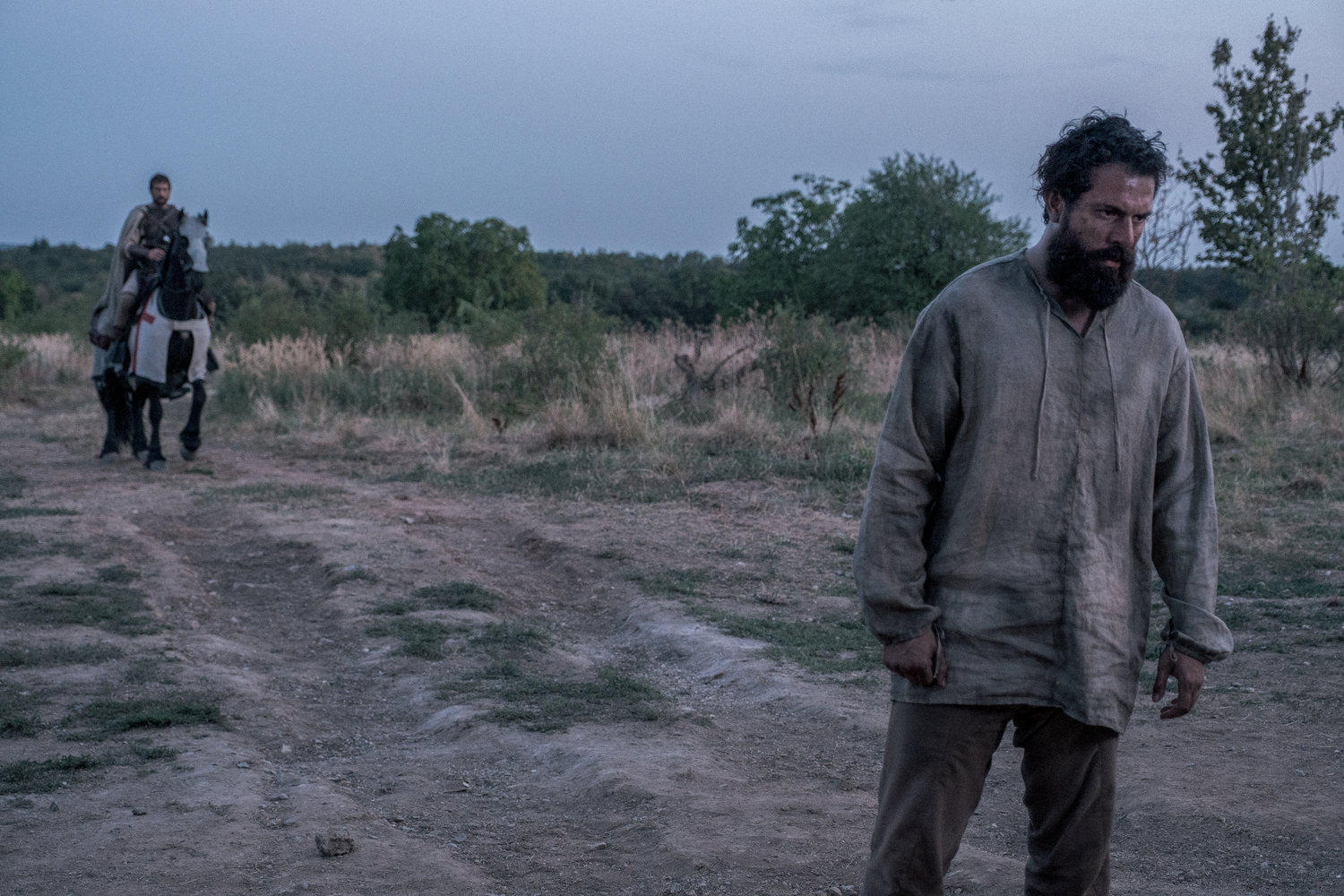 Tom Cullen has always been a shining beacon as the conflicted Landry, a man who believes in the principles and goals of the Templars while at the same time throwing them to the wind to sleep with the queen – repeatedly.

And once again Cullen shows us that emotional struggle within Landry and the desire to find forgiveness and atonement. And in a Templar fortress in Chartres, France, he will get that chance — and we meet Mark Hamill as initiate master Talus. Oh, Talus is a crusty, hard-edged veteran of the Templar order, with enough scars – emotional and physical – to stop most men’s sinful hearts. Talus doesn’t believe Landry can or even should be saved and does his best to treat him accordingly.

One episode in and I’m a huge fan of Hamill in this role. I think he’s got just the right amount of hardened edge tempered by wisdom and a look that could make weaker men take a step or two back. I’m a fan and am excited to see what Talus brings to the table. Talus wants to test and rebuke Landry, but even so sees some of what this fallen Templar has inside him.

Talus and Landry, with Tancrede tossed in for good measure, feel like a trio that could be something kind of fun. We’ll watch the maturation process of these relationships closely.

While Landry does his best to absorb the lessons of season 1 and use them as a stepping stone to redemption in season 2, we find our favorite naughty Templar has also hit the skids. Funny, I’d thought Gawain would reap wild rewards for leading the mercenary army against Landry and the Templars at last season’s end, but that doesn’t appear to be the case as we open the second season of Knightfall.

Nope, Gawain is a miserable wretch who appears to have discovered the medieval equivalent of fight night at the local public house. There’s betting, there’s drinking, there’s men fighting to the death for a small purse, and of course there’s whoring afterwards. You know, the good stuff of life. 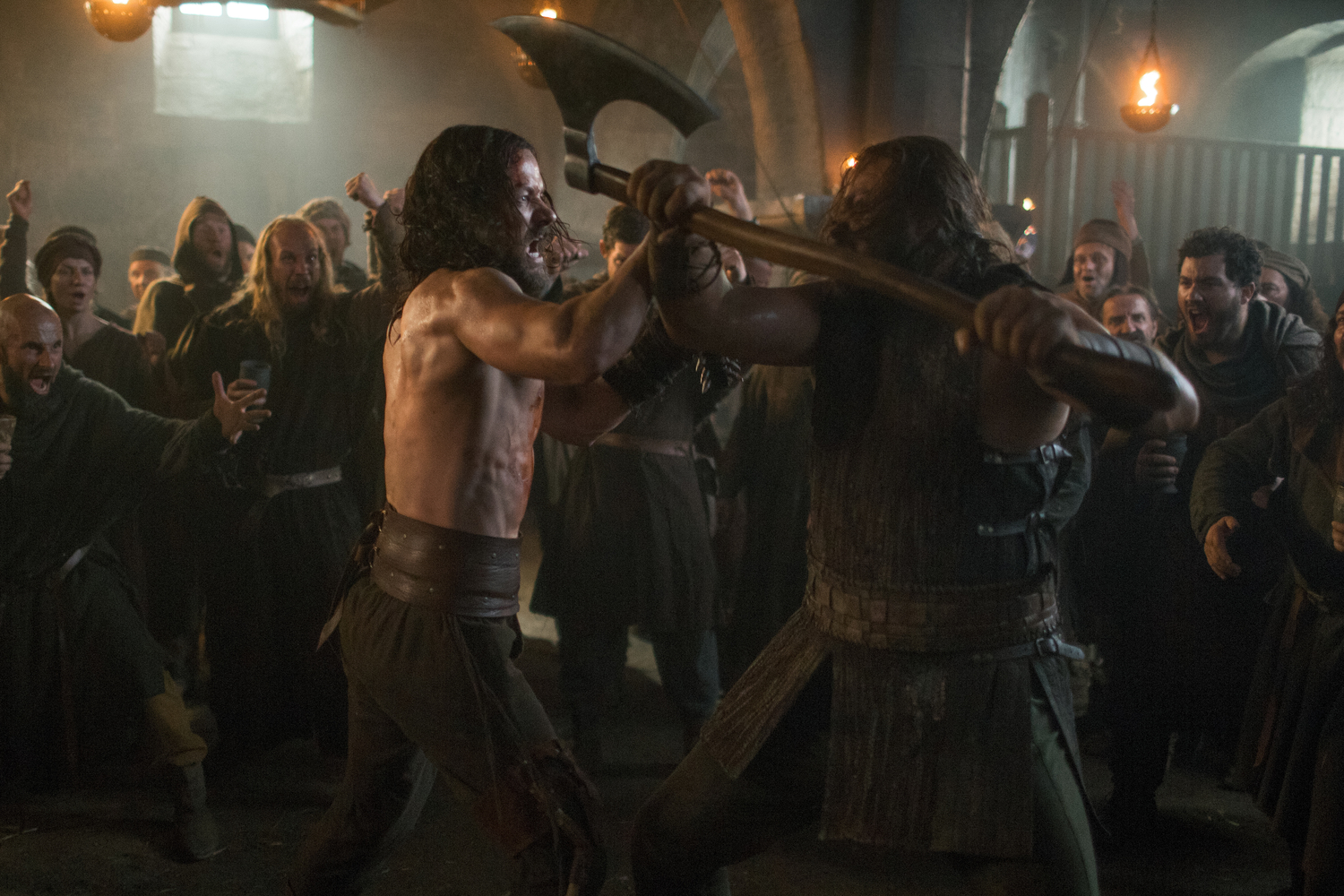 And that is the life Gawain now abides in. It’s filthy, dirty and reeks of honorless scoundrels in every corner – quite the fall for our former Templar Knight. Padraic Delany did a masterful job of creating one of my favorite characters from season 1. He was a guy who felt the world, and Landry, owed him something for his injuries. And the pity parties followed as the season wore on.

And the more he thought about it, the more he listened to the sweet sounds of De Nogaret’s voice, the more likely the fall was to come. And it did. Replete with a knee brace created by the King’s physicians, he was again leading men into battle. Bad men, but men all the same. In the end, his hatred of Landry turned him into something completely different than what he hoped he was.

So what happened after the battle at season’s end? Did Gawain’s complete 180 from the Templar world (or Landry’s Templar betrayal) simply prove too much for him? Talk about a guy with some self-loathing going on. He was a mess on all fronts when a voice from the past stopped by.

Ah, William De Nogaret, how I have missed you. That honey-soaked lilt in your voice when you’re manipulating someone or some situation is such a joy to hear. And in all honesty, I miss your beard, too. In fact, facial hair was a focal point of this episode as De Nogaret shed his beard (not a fan of clean-shaven schemers), King Phillip has now acquired a beard (Looks good, too), and Landry had a full face of hair going on (whoa, trim that bush). 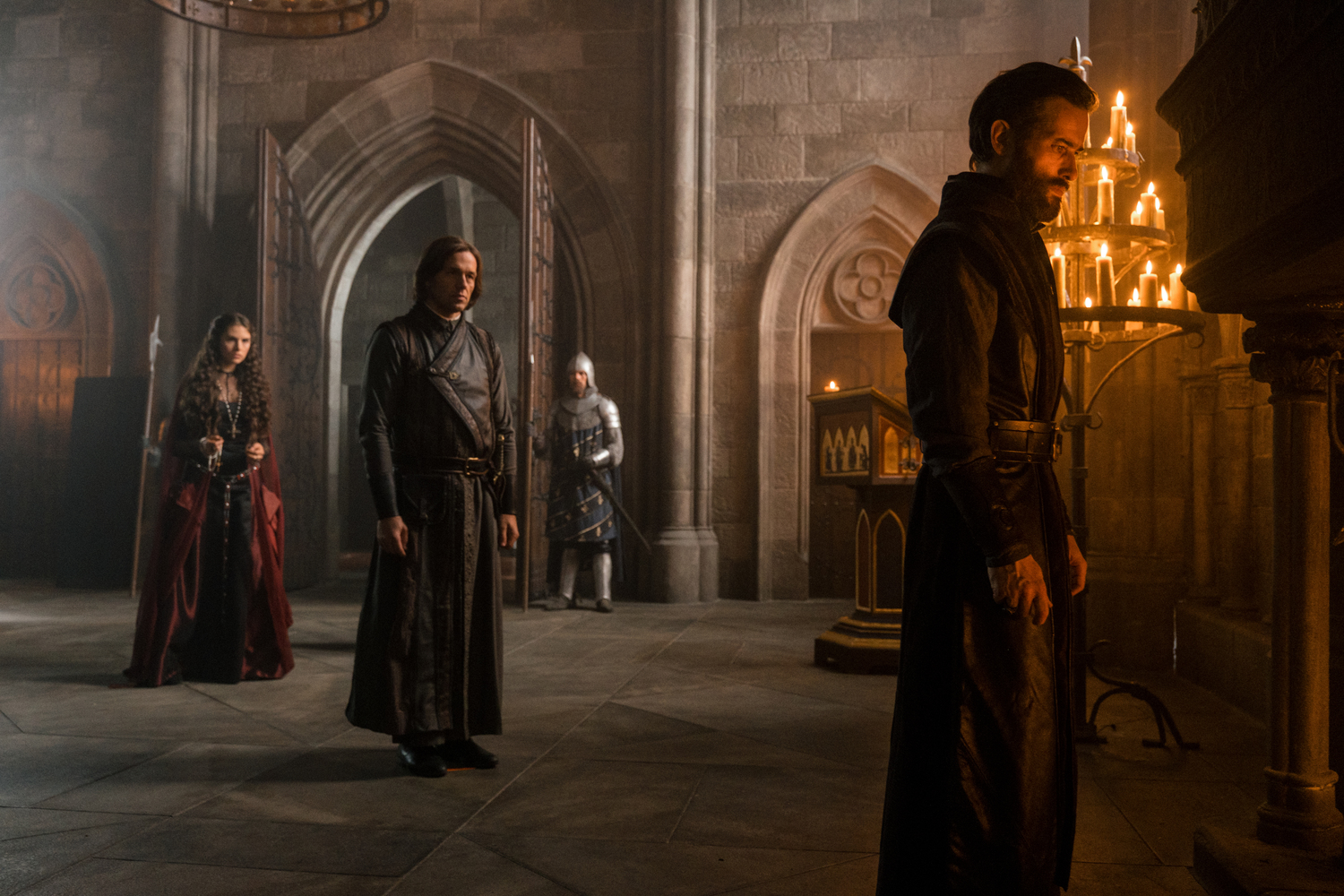 But I digress. It’s hard not to really love the character of De Nogaret. The guy has nine lives and even at his most coy, slimy, opportunistic self, he’s a pleasure to watch pull the strings around him. Julian Ovenden was superb last season as he proved to be the comeback kid of the show. He was up, he was down, he was hunted, he was lauded and as season 2 resumes, he’s right back in the royal palace advising King Phillip.

It’s a tour-de-force performance for Ovenden as De Nogaret and if episode 1 is any indication, he hasn’t lost his bite – or his knack for manipulation. Love this character to death. I’d like to see him gutted at some point, but until then I’ll enjoy his ability to wiggle out of the noose again and again.

So he’s stopped by Gawain’s flophouse apartment to offer a little help to our fallen Templar. And you know what that will entail, right? Find Landry and drag him back for a proper torturing and death. I suspect Gawain needs a new purpose and De Nogaret his happy to oblige. Should be fun to see Gawain and Landry cross swords again. I long for it.

But that’s not the only hunt going on. “God’s Executioners” introduces us to the King’s son, Prince Louis (Played by Tom Forbes), who announces himself to us in a pretty impressive way – rides his horse through the castle and into the throne room to present his father the severed fingers of barons who would not fall in line. I don’t know about you, but I found that to be a pretty powerful introduction to the show and demonstrated that Louis is not to be screwed with. The fact he seems to loathe De Nogaret and understands his boot-licking ways completely is just an added bonus. 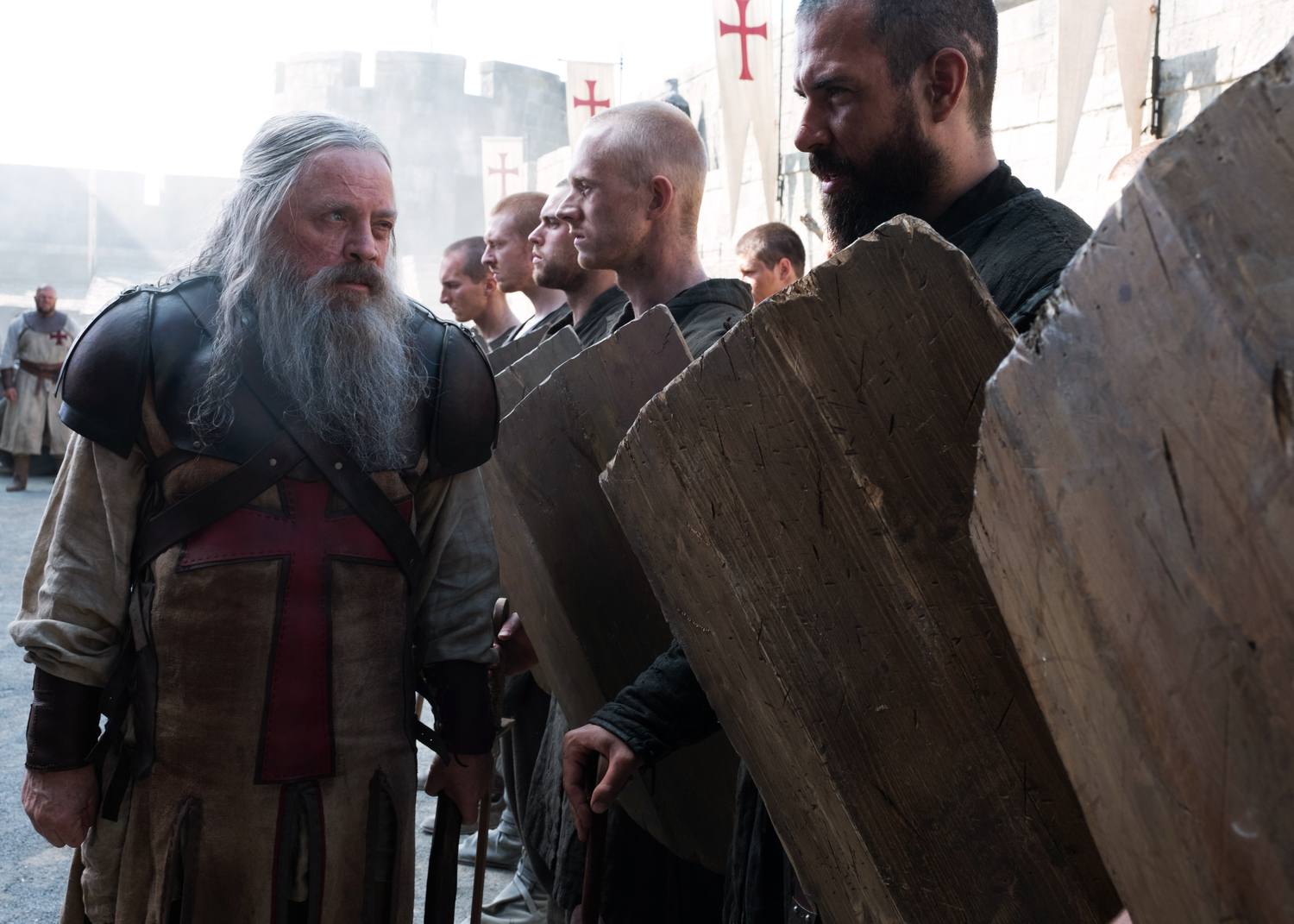 Demanding that De Nogaret see to his horse was a nice little moment of domination. I enjoyed it and suspect I’ll enjoy Louis quite a bit. Unfortunately, it becomes clear that he’s unaware of what’s been going on with his mother and her subsequent death. Of course King Phillip lays it Landry’s feet, which means Louis has got revenge on his mind.

He further complicates matters when he decides to dig up his mother’s grave and — cat’s out of the bag – they discover she’s been opened up and deduce quite correctly that the baby lived. Louis strikes me as a “get it done” type of prince, something that should be a lot of fun – bloody fun – to see play out. And what of his posse that follows him around? His own personal special forces squad with “unique” talents? That’s my guess.

No way Phillip is going to be okay with Landry and Queen Joan’s baby living and given Louis’ rage about what Landry “did” to his mother, the path to revenge has been neatly set. And of course, Louis and his special team are sent not for Landry, but for Landry’s child. I’m assuming they’ll use the baby to lure Landry to some perilous moment.

On top of all that, we’ve got King Phillip itching for a final showdown with the Templars. I mean, the guy is wonderfully focused on his outrage and humiliation and certainly holds the Templars responsible for a large part of his pain. Landry represents the Templar threat, a threat that continues to gain momentum with De Nogaret fanning the flames.

But there’s more. By the end we get Pope Boniface stopping by to let the king know that it’s time for the crown to “submit or be damned.” The church wants the crown under its authority, something I’m pretty sure Phillip is in no mood to accept. Could we see a Landry-Boniface partnership to put down Phillip? Or vice-versa?

One thing’s for sure, the first episode of season 2 of Knightfall should give us plenty of optimism that bloodshed is going to be plentiful this season. There will be betrayal, alliances, close calls and the question of just where Landry is going to end up when all is said and done? Knightfall’s second season is upon us and I’m more than a little delighted. Let’s see what happens.