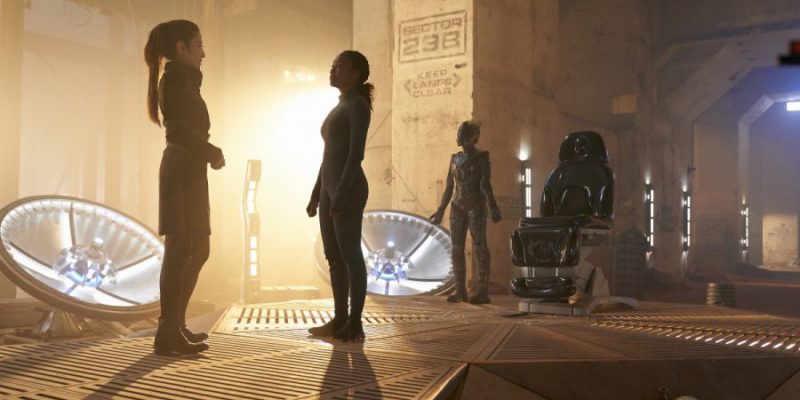 While we’ve been somewhat aware of the power and purpose of “Control” over the last few episodes of Star Trek: Discovery, episode 211, “Perpetual Infinity” gave us the clearest picture yet of just how monumental a task it really will be to save sentient life in the galaxy. “Control” is not playing around with this whole “wipe them all out” scenario and demonstrated just how formidable this emerging AI is going to be.

“Perpetual Infinity” was a galvanizing episode that gave us a glimpse of the intensity needed to try and defeat this threat to the galaxy through the eyes of the Red Angel herself, Burnham’s mom. And while the episode ended with mom and daughter parted with tears streaming down their faces, most of this episode was devoted to Michael getting a first-hand lesson from mom about how serious this all is.

Michael wanted a re-connection of sorts and her mother simply wasn’t having it. While you could construe that as a coldness and harsness brought on by isolation, I took it as a sign that mom is completely and utterly dedicated to keeping the galaxy intact, and thereby her daughter. She’s seen it, she knows. I thought Sonequa Martin-Green did a great job of fusing confusion, joy and intensity into a wonderful mix right here. “What’s wrong with mom?” nothing, she’s trying to save your hide – repeatedly. That takes focus, Michael. 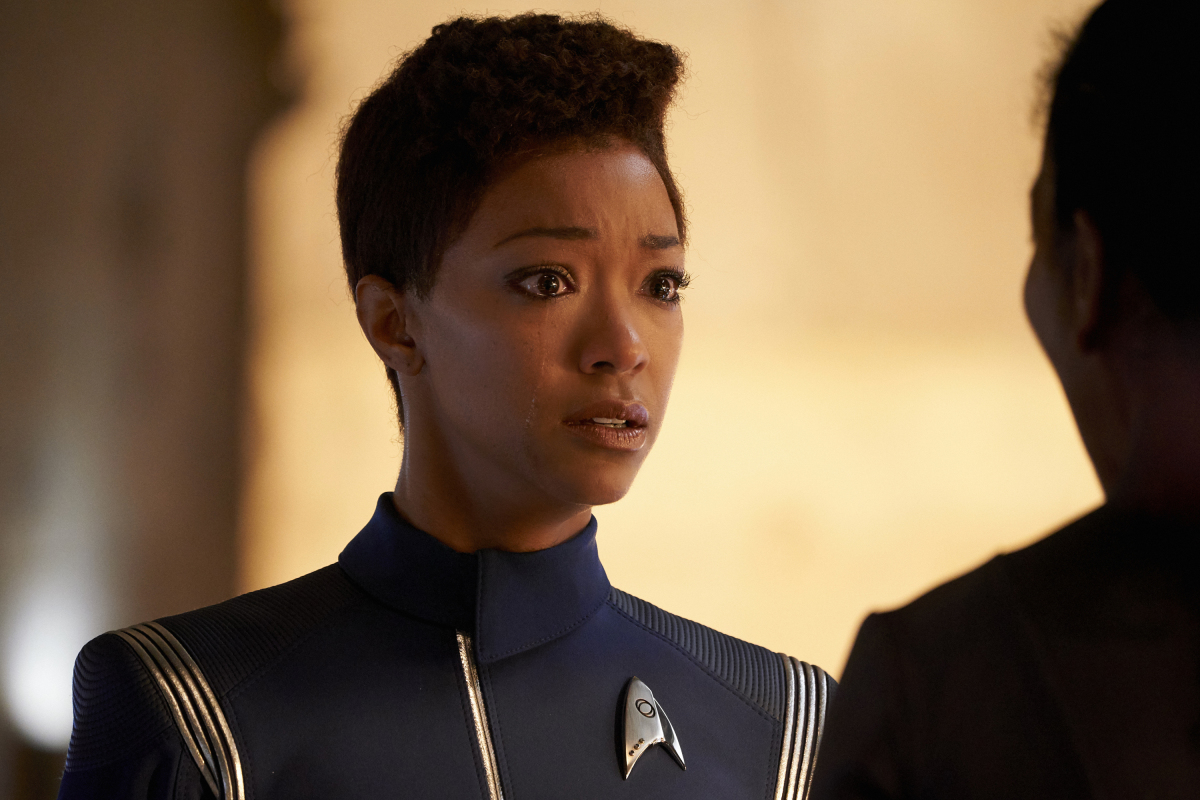 Fortunately, emotion finally came flowing through just before Michael’s mom was pulled back to the future by the power that dwells within the Red Angel suit. I thought it wonderfully interesting to see mother and daughter with two completely different objectives and how they simply couldn’t understand why the other couldn’t understand. Fortunately, as the final scenes played out, Michael began to understand that it no longer was simply a matter of mother-daughter relationships or lost family, but the continued survival of all life in the galaxy.

Pretty weighty stuff, that. I love the intensity of their conversations and how focused on the bigger picture mom was. It took Michael a while to get there (as you might imagine), but eventually she grasped the enormity of the “Control” threat and her mom’s single-mindedness to foiling its plot.

The insight we now have about “Control” and its objectives are terrifying. The fact it possesses the ability to “possess” a human body just makes it even more nightmarish. I was never a fan of Leland’s zealous devotion to Section 31, but now that he’s a “Control” puppet, I am feeling some pangs of sympathy for the character. What I really liked about possessed Leland was the wonderful way it highlighted just how astute an observer Philippa Georgiou is of the human condition – or not human condition. 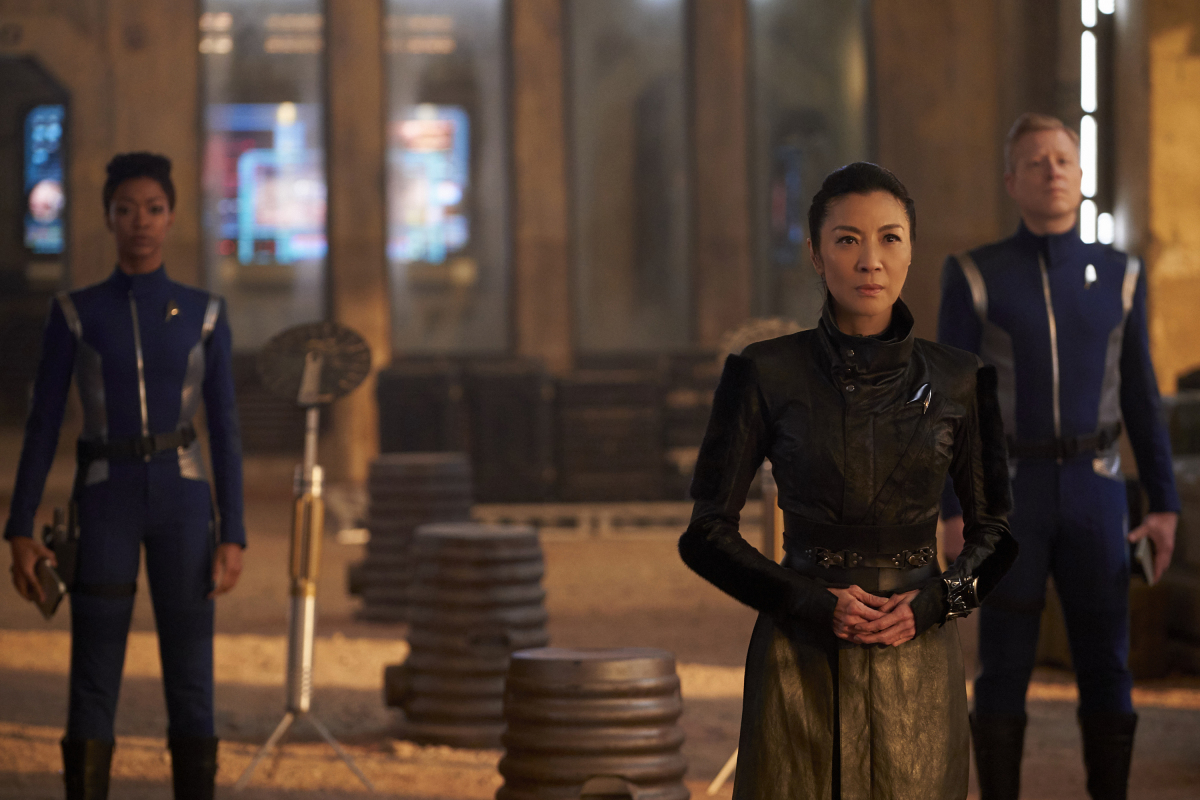 Obviously, I’m a huge fan of Michelle Yeoh’s portrayal of Georgiou and have sung her praises repeatedly. But I was delighted to see a total manifestation of her deductive powers in regards to Leland. A look here, a change of orders here, a repeated phrase that rang a bell – Georgiou demonstrated such a quick and ready instinctive ability to decipher small tell-tale clues. She’s always watching, always processing, always putting pieces together that no one else seems to know are even on the board.

All that was on display in this episode as she cracked the Leland-as-Control code and was largely responsible for keeping the sphere download at least partially out of Control’s hands.

And she wasn’t alone. It looks like Ash Tyler has some of those same skills, doesn’t it? Georgiou communicates with him on a secure line and one of the first things he says is, “That’s not Leland,  is it?” Tyler’s role has been a little strained of late, but in this small segment we got a look behind his intellectual curtain a bit and see that he’s got some formidable skills himself. I think Shazad Latif’s run as Ash Tyler has been interesting and I’m glad to see him getting in the fray a little more. It’s an interesting character.

I dare say that the duo of Georgiou and Tyler could be a very interesting pairing moving forward. They would be, shall we say, a tough nut to crack.

I mean, Georgiou wants to run the galaxy again and I don’t think Tyler’s goals are that grandiose. Once they down Leland, could these two be the pair that takes Section 31 into the future? Just a thought. I love how Georgiou never wastes a question, never misses a reaction from a comment, is always locked in to what’s going on (except perhaps when she goes Defcon in the pleasure department – right Tilly?). Makes her dangerous, which I’m enjoying. 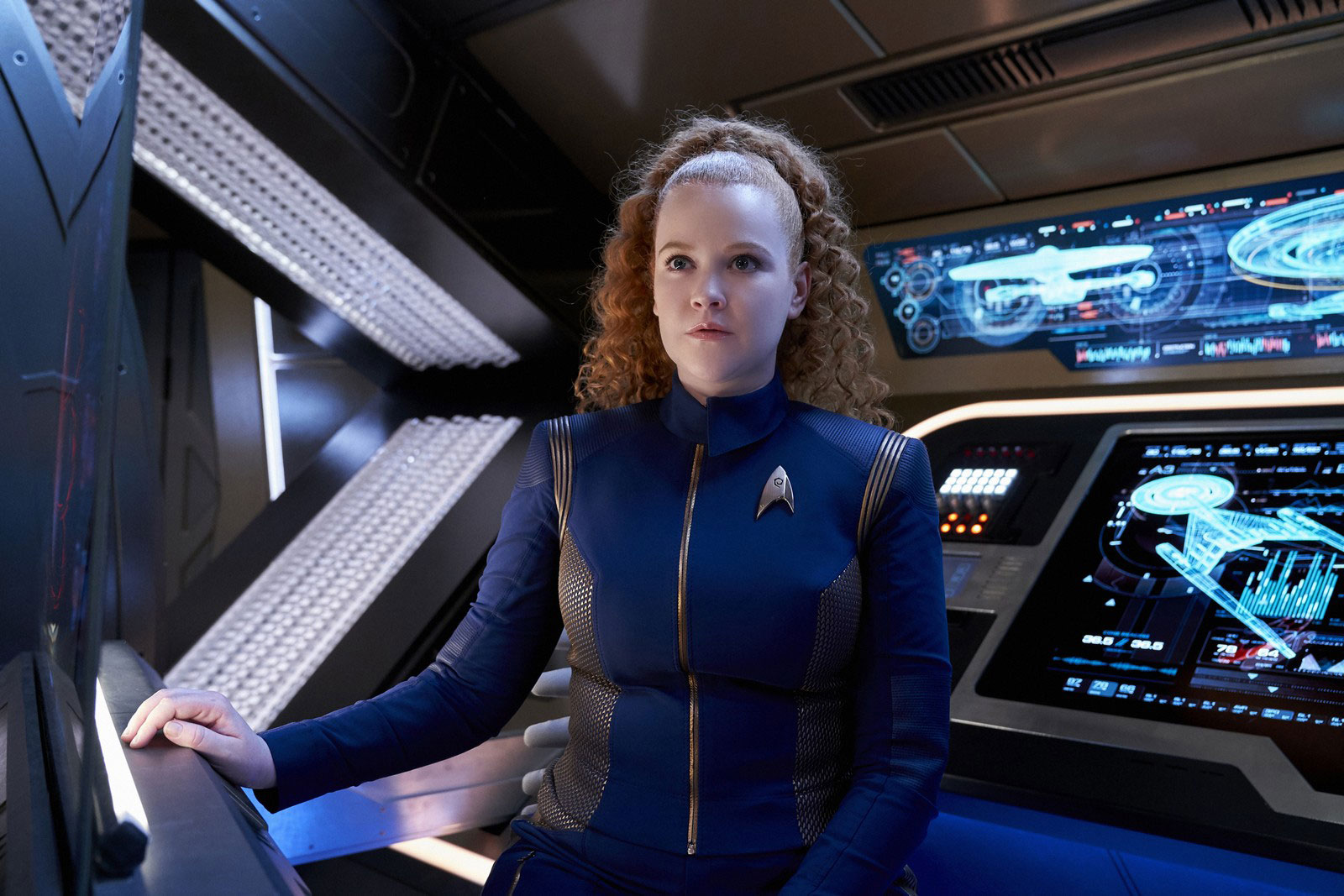 But where does that all leave us. Control, wearing the Leland suit, appears to have made its escape from fiery death as it got back to the Section 31 ship. Given Section 31 ships would appear to be a little more technologically advanced than your basic right-off-the-lot starship, it would be interesting to see if Discovery can track Leland/Control. And if they do, what will they find?

Control was able to download more than 50 percent of the sphere data, a hefty amount, but Spock felt it wasn’t disastrous. So, it seems likely that Discovery and Control will lock horns again before too long. And the stakes? Nothing major, just the survival of all sentient life in the galaxy – or not. Should be fun, right?

Unfortunately, it’s unclear if our Red Angel can be of any further use moving ahead, having been sucked back to her time period. It’s also unclear how much Section 31 or other Star Fleet entities have been compromised by Control? I don’t think we’ve seen the last of the “bait-and-switch” hologram gambit. 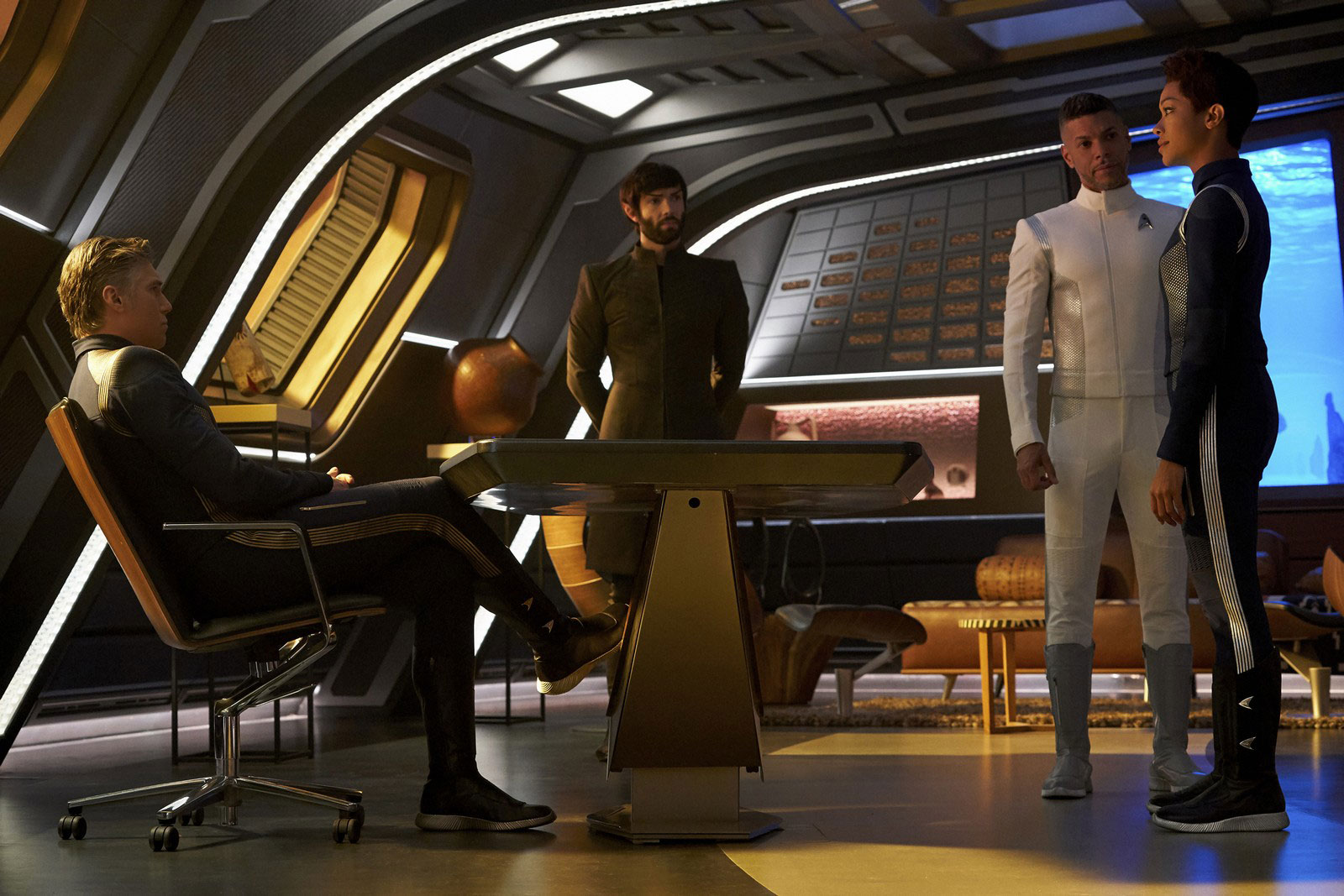 Episode 211 was quite interesting for me in that it provided some closure for Michael about her family while also opening up a whole can of questions (Where’s dad?) about the past and future (mom’s been looking out for you, Michael. Time travel seems cool). And what’s Control’s next move? While there’s a ton to be worried about and lament through this episode, it also is giving us some positive signs. Dr. Hugh Culber has resumed his duties, Tilly is still quintessentially Tilly, and Michael and Spock seem to have found some sibling common ground.

I felt really good about the final scenes between the two and thought the symbolism of Spock setting up the chess board for a game brought them kind of full circle. Remember, the last time they attempted to play, it broke down into a fight and Spock dispatching the board with a wave of his Vulcan hand. The most recent moment seemed to symbolize that what was broken can be fixed – the rift can be healed.

We are heading towards the end of season 2 of Star Trek: Discovery and I’m tremendously pleased to see that the show has captured a wide-ranging and increasing fan base. Let’s face it, you’re not going to like every episode that comes out, but that’s often based on our own personal interests in the story and characters, as well as our own biases. But, it’s clear this latest Star Trek iteration has hit a nerve with viewers and offers plenty to be excited about, even with the impending departure of Anson Mount as Captain Pike.