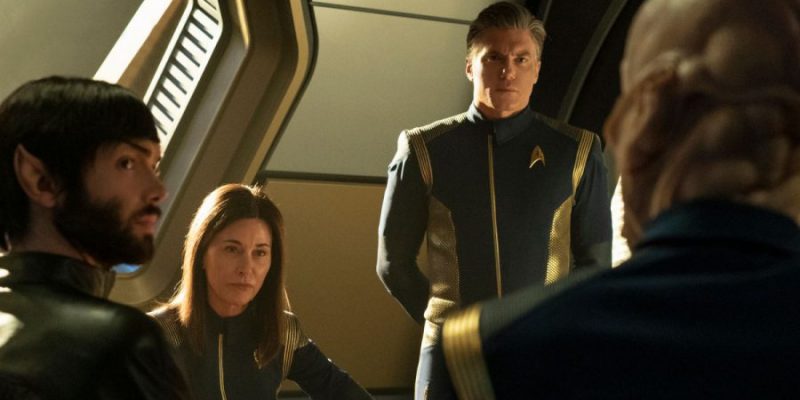 If there’s anything that gives me total joy (Besides watching Emperor Georgiou dominate a situation – more on that later), it’s a good twist within a twist with a little side of twist. Talk about satisfying, that’s exactly what episode 210 of Star Trek: Discovery, “Red Angel,” served up for viewers the other night. Wow, I did not see that coming, though in retrospect, maybe the first twist was too obvious.

Through the usual machinations of the Discovery crew, along with Spock’s knowledge and Section 31’s “special skills” we learn a ton about the Red Angel in this episode. Turns out, Section 31 had a good idea of what (and who) this was from the beginning. The exoskeleton “red angel” look is a time travel device that Section 31 had knowledge of because — they designed it. That’s right, Section 31 worked on its own time travel tech because they suspected the Klingons were doing the same years ago.

And the twists just kept coming, didn’t they? Felt like I was in a yoga class from hell with all the revelations that came rolling down the road. Turns out, thanks to the kind of science that only Star Trek can deliver, the DNA signature from the suit (particles are left behind when Red Angel appears), the person using the suit to jump through time is … Michael Burnham? That’s right, it’s her signature that appears. 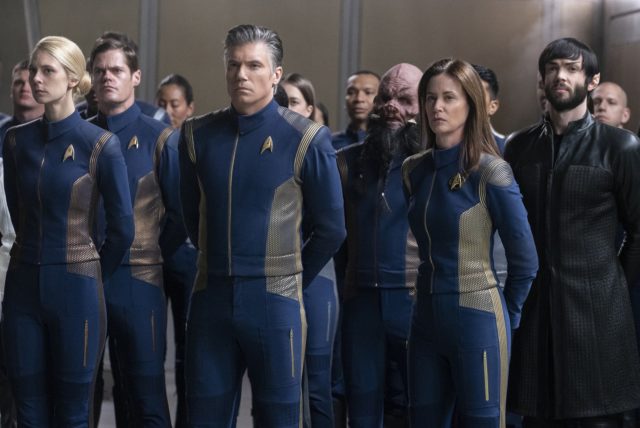 At this point, after the “oohs and aahhs” had petered out in my mind, I wondered if this was going to be the way Star Trek ties that little thread together – you know the one, Spock never speaking of a half-sister in TOS. Why, because she’s in the future where she chose to remain to keep an eye on things. See where I’m going with this tie-in to TOS? In my mind, it works perfectly, but as Ep. 210 played out, that theory may have to be junked.

You wanted another twist at the end? You got it. I really enjoyed seeing everyone – Ash, Georgiou, Saru, Leland, Pike and the crew come together, work together to put a daring plan in place to not only track the Red Angel, but capture it. With Burnham as the bait, and her death as the the fishing line, the plan to catch and trap the Red Angel was successful. The reveal of who the Red Angel was, however, was completely a surprise, though again it shouldn’t have been given Burnham’s conversation with Leland earlier.

The Red Angel is none other than – mom! That’s right, Burnham’s mother isn’t dead, but instead the harbinger of help and, hopefully, the savior of all sentient life in the galaxy. Wow, I thought we were going to get future Burnham popping out of the exosuit, and I suppose on some level we did. But Momma Burnham as the Red Angel? Boy, does that open up some interesting doors and deliver plenty of more emotional mindfields that Michael is going to have to navigate. It’s something of a testament to Michael’s mental strength that she isn’t a complete emotional basket case at this point. Must be that Vulcan training kicking in.

Sonequa Martin-Green is really delivering some stellar work this season. I’m a fan. There, I said it. I’m a fan SMG and I’m not afraid to shout it to the world!! 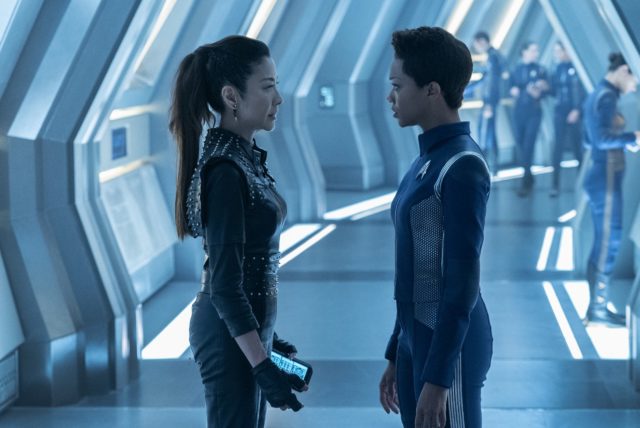 So that is quite the revelation, one that has a lot of potential. And now that Mom’s back in town, how will the whole “saving the galaxy” plan unfold. Will mom do it or does Burnham, whom we’ve seen is the ultimate sacrificial lamb (as Spock also pointed out), take over, which would help my theory about why Spock never spoke of a sister in TOS. Hey, i’m gonna flog that plot point for a while.

Regardless, the Red Angel is in hand and now it’s time to discover who or what is planning genocide in this galaxy and how can it be stopped. I’m assuming our Red Angel has some wonderful future tidbits to share, so I’m looking forward to her debriefing. As for Michael and mom, there’s a lot to sort out there. And what of Leland? Did our erstwhile Section 31 captain know that Burnham’s mom was still alive and likely the Red Angel?

And thereby took two jabs in the nose from Michael when he copped to being the one responsible for her parent’s deaths? I mean, the guy is committed to the cause, so perhaps a bloody nose is a small price to pay for secrecy, right? I’m starting to like Leland a bit more. He showed some genuine remorse in this episode, which I liked. And….I suspect Georgiou is going to kill him at some point. So, there’s that hypothesis.

Right now, as I sit here typing this, I’ll honestly say this was one of my favorite episodes of the series thus far. Definitely a top 3 candidate. There were just so many revelations going on and that twist on a twist regarding the Red Angel’s identity was delightful. Well done writers. 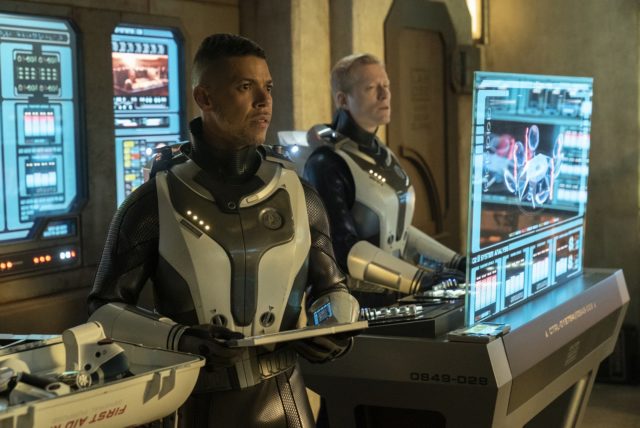 And yet for all the Red Angel angst going on, there was so much more playing out, which I also enjoyed. Seemed as though no moment or character was wasted in an episode with plenty to feast on.

We had the funeral for Airiam, which was poignant and well-done. And within that, we got a chance to hear Saru sing a song in his native Kelpian. I tweeted to Doug Jones if that was him singing and he confirmed it was and noted he was nervous when he saw it in the script, particularly because it was in Kelpian. I thought he was on-point and tweeted as much to him. Again, the many layers of Saru just keep getting deeper and deeper. And I love it.

Tilly got to be Tilly (Mary Wiseman, you are several flavors of scrumptious) a couple times and Admiral Cornwell (Jayne Brook is another revelation) had some stellar moments. She’s pretty good with a line and her sit-down with Hugh Culber was very nicely done. Admiral Cornwell can stick around a while longer as I love how Brook plays her – a bit of a pragmatist who hasn’t lost her ability to see irony and humor in a situation. It’s golden every time she’s given something to do. 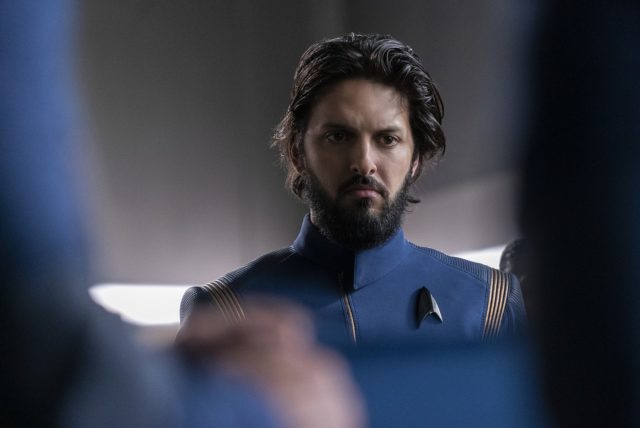 The Culber-Stamets dynamic is still something to behold. If you remember, when Hugh Culber re-emerged from the Mycellial network via the “black blob,” I conjectured that this Hugh may not be the Hugh that Stamets was hoping for. As it turns out, I was fairly correct in that bit of conclusion-jumping. I really enjoy the work of Wilson Cruz as Hugh in watching him try to navigate that age old question of “who am I?” His talk with Admiral Cornwell was great and his interactions with Stamets are both tense and satisfying.

Which leads me to my favorite scene of the whole episode – Culber and Stamets meet former Emperor Georgiou. And gird your loins, fellas! Michelle Yeoh continues to deliver a vibe that is at once confident, menacing, intelligent and more than a bit seductive. When Culber comes into the science area where they are working, Georgiou not only spots the tension between he and Stamets, but intuitively knows there’s sexual tension as well and just goes to work on the lads.

It’s such a funny interaction and she’s so wantonly dominant that its simply mesmerizing. Stamets and Culber don’t really know how to react to her provocative declarations, which is so much fun to see. In her old universe, Stamets wasn’t as bright and was certainly Pan-sexual. Come on, lads, figure it out.

Philippa Georgiou is a treasure trove of a character, one I’m truly glad to see back in the Discovery realm. I don’t know how long she’ll be in for the ride, but it’s clear she’s a force to be reckoned with and our struggling couple of Stamets and Culber now understand that as well, having been sucked up in her sexually-subtle little cyclone. More, please. 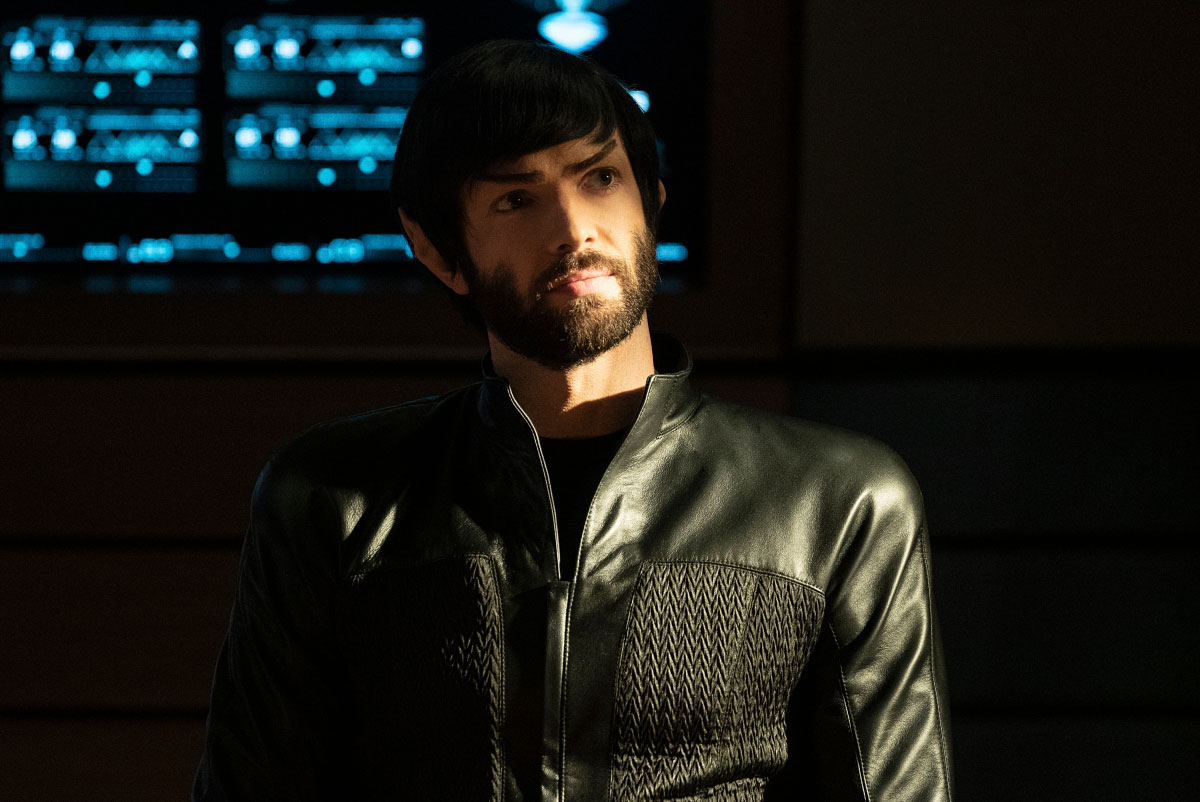 And while Culber and Stamets examine the struggles in their relationship, Burnham seems to be having some success in moving a couple of her relationships (we won’t talk about the mommy issue anymore) to a more positive point. Now that she knows Ash Tyler wasn’t the traitor on the Discovery, the couple enjoy an intimate moment that may portend more in the future. And while that seems to be blooming again, her relationship with Spock seemed to go from rocky (not the chess set, Spock) to a grudging admiration for his half-sister’s moxie. I sense a melting of Spock’s previous coldness and indifference to Michael’s overtures to mend the fence, as it were.

Episode 210 gave me the first subtle glimpses that Spock is perhaps viewing his sibling as something new, fresh and worthy of renewing some of the bonds of their relationship. Now that we’ve seen Ethan Peck’s Spock for a few episodes, I’m gonna say that I’m a fan. I think Peck embues Spock with just the right amount of logical coldness while leaving cracks for a bit of subtle humor or irony to make it’s way to surface. The veneer is cracking a bit and I look forward to seeing what a renewed relationship with Burnham, no matter how it forms, brings to the chemistry of Star Trek: Discovery.

Ethan Peck, I applaud your Spock and I do think the beard is working for you, despite what your sister intimated. Very Bohemian, very “Let’s buy cheap wine and go to an outdoor music festival” type of thing.

So here we are. The Red Angel has been exposed and the fallout from all of that should be very interesting. My gut tells me Leland and Section 31 are far more involved or knowledgeable about all this than they let on. Georgiou as much said the same when alone with Burnham. So what next? Let’s tune in and find out, shall we?