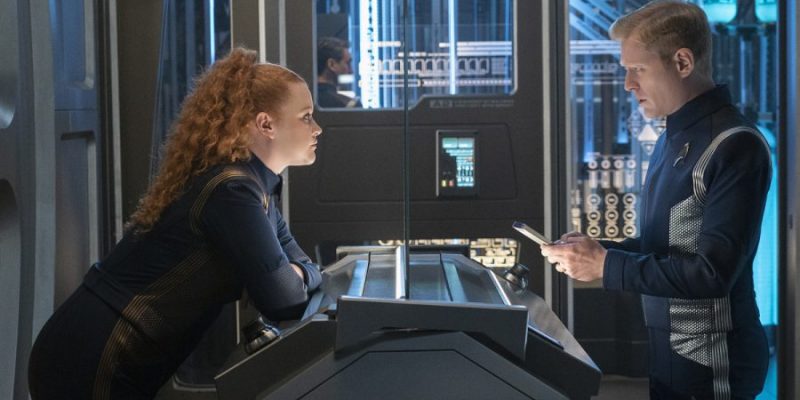 Before I get fully involved in looking back at Star Trek: Discovery’s episode 207 (“Lights and Shadows”), I must pause a moment to reflect on my utter delight at watching Michael Burnham and Philippa Georgiou “stage” a fight that allowed each to vent a little physical anger at the other. I don’t know how much of the stunt work was done by Sonequa Martin-Green and Michelle Yeoh, but it looked like they did most of it.

Regardless, I found it wonderfully satisfying that these two characters finally threw down a bit in the hallway of a Section 31 ship. Yes, it was a ruse, but it was a fun ruse and, as mentioned above, these two have some unresolved issue dating back to the mirror universe.

So, while there’s a lot to dissect on episode 207, I would feel remiss to not jump right to my favorite scene of the show. Well…one of my favorites scenes. Tilly using the word ‘Freaking’ several times and getting stern looks from Saru were gems as well. But for now, let’s go with the ladies going fisticuffs as my topper. 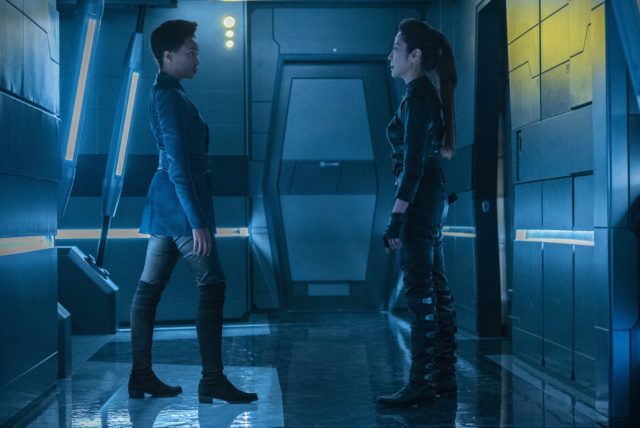 Having said all that, we have, at last, tracked down Spock. In the end, he ran home to mommy. Michael Burnham went home to Vulcan to search for answers as to Spock’s whereabouts and it became apparent fairly quickly that Mom wasn’t being as forthright as she might have been. In the end, Burnham is led to Spock’s hiding place and our bearded, bohemian Spock is in a bad way. For my money, it was a little disconcerting to see a Spock so lost in thought, so mentally broken and scattered.

Captain Pike and Burnham speculate that the Red Angel, which we now know to be humanoid in an exoskeleton suit (likely from the future), appeared to Spock two months before it started showing up in the galaxy. It either broke Spock or chose him because he’d been broken. They also speculate that perhaps the Red Angel showed him a future he couldn’t process. An intriguing theory and one that seemed to motivate Burnham quite a bit.

And it was that motivation that would eventually lead her to find a broken and confused Spock. Of course, as we found out later in the episode, not all of his gibberish was useless. There was a method (and coordinates) behind his apparent madness. I”m sure we’ll see where it all leads later. 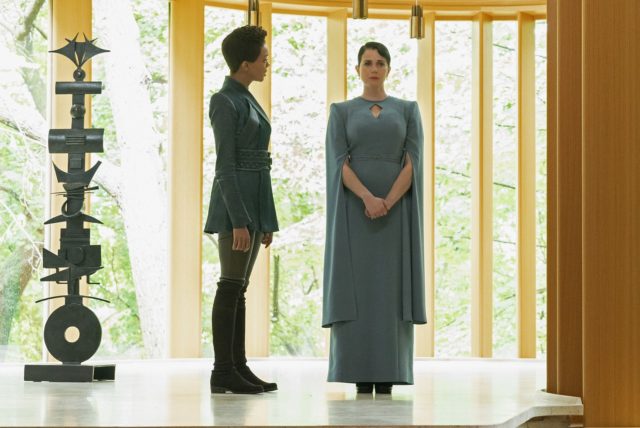 My initial thoughts about Ethan Peck’s Spock is that I liked it. We didn’t get much of a reading on Spock outside of his obvious mental difficulties, but I dug the bohemian look and look forward to seeing what he’s like when he “comes around.” There’s been speculation that he’ll not really resemble the Spock we know from TOS … yet. But, that something may happen during the run of Star Trek: Discovery that will push him toward that more logical, stiffer character we remember.

Or, the writers and show runners have simply decided to let Spock’s hair down (see what I did there?) a bit more for creative purposes. And you know what, I’m absolutely good with that.

Regardless, with Sarak’s urging, Burnham gathers up Spock and takes him back to the Section 31 folks. She’s been convinced that they’ll treat him and that’s initially confirmed by Leland when they come into the Section 31 realm. I keep wondering if he’s really a murderer or if there’s more at play here?

This is the great turning point of the episode. While Leland talks out one side of his face, reassuring Burnham that they have Spock’s best interests heart, we find that Georgiou knows better. It’s in this moment that the “fake” fight plan develops and we have another escape in play. Again, loved the Burnham vs. Georgiou battle royale, and the getaway Burnham makes with Spock from the Section 31 ship. So now she’s on the run with her half-brother. I feel that won’t end well, don’t you? But where to go? Back to Discovery? What will Pike and Tyler do? Oh, don’t get me started on those two. 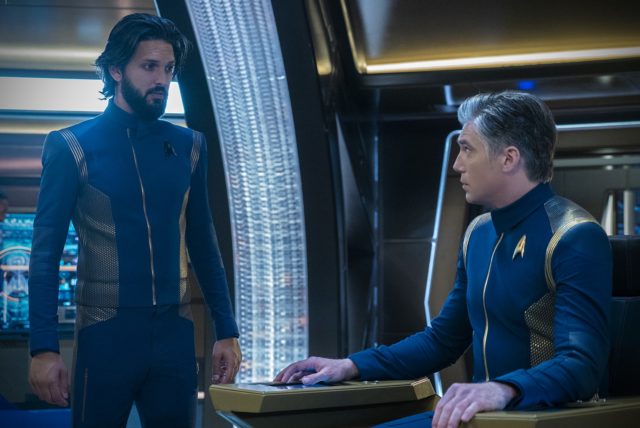 What was truly great about the whole plan was that Georgiou demonstrated the mental nimbleness she offered as emperor. She knew a Burham escape with Spock would be good for her and bad for Leland. There was that wonderful moment later when Leland questions Georgiou about the escape and she lets him know in no uncertain terms that she’s running the show now. It was stone cold domination of a situation. I loved it. It will be interesting to see how quickly and far Georgiou rises within Section 31. Let’s face it, she’s uniquely qualified to wield that kind of shadowy power, isn’t she?

So while Burnham is on Vulcan, then Section 31’s ship, and the eventual escape, Captain Pike and Ash Tyler get to spend some wonderfully productive relationship-building time together. The Discovery stayed near Kaminar to study residual remnants of the Red Star event when an apparent temporal anomaly appears. Well, begging exploration, Pike decides to pilot a shuttle closer to launch a probe. Tyler, who seemingly wants to be pals, gets to tag along, though Pike isn’t buying it.

The pair started sparring on the bridge when Tyler was a bit kerfungled about Burnham’s departure. Pike and Tyler get into a bit of a pissing match about who gets to know what, which leads to a glorious moment. Tyler tries to let Pike know he should be given the information by flipping his Section 31 badge into Pike’s lap, which gets this reply, “Uhh, Mr. Tyler, the chair outranks the badge.” And with that, a jolly episode of Tyler vs. Pike was in full bloom. 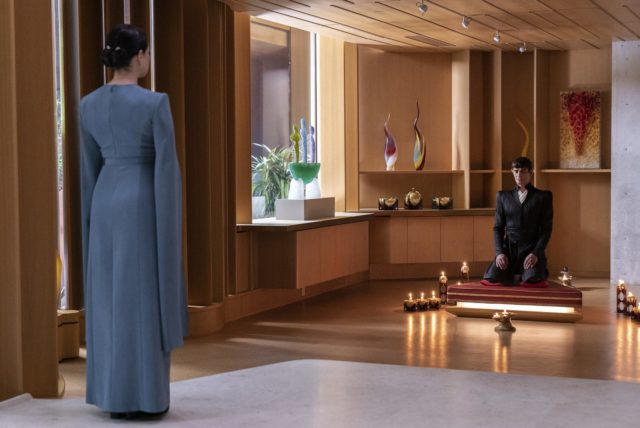 Pike has some guilt issues about missing the war he’s trying to work out, as well as struggling with Tyler’s ghost Klingon persona. Tyler is struggling with his role as a Section 31 operative and the chain of command (not to mention his feelings for Burnham). “Are you familiar with the term ‘Bad Penny’ Mr. Tyler,” says Pike in a nice elevator moment. And it just kept going as they were sucked into the temporal anomaly where they are attacked at one point by the probe they’d sent in earlier. It had been gone 500 years and modified in a deadly way. It also seemed interested in a quick look through the Discovery’s computer system.

Was this probe modification part of the world of the Red Angel? Are they here to help, hinder or simply act like do-gooder woodland nymphs that travel freely through time? The arrival of the killer probe, Spock’s early exposure to the Red Angels, and differing viewpoints about what it might mean is an interesting story line for season 2.

Eventually, Tilly and Stamets do their scientific mastery thing and figure a way to track and eventually rescue Tyler and Pike (Blessings on the mycellial world, right?), who have by this time formed a cautious mutual admiration situation. That which they supposed about each other earlier may have been short-sighted. The fight to survive had smoothed those rough edges a bit, so it will be very interesting to see how these two characters interact moving forward. 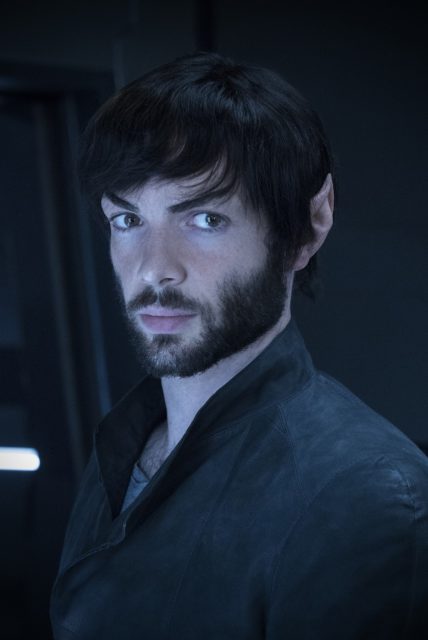 And this begs the question, what would the Discovery do without Stamets and Tilly? How often have those two, either separately or collectively, saved the bacon of that ship? I’ve often lauded the work of Doug Jones as Saru, but the relationship between Tilly and Stamets is really rewarding for me. Mary Wiseman and Anthony Rapp have a wonderful rapport as their characters. They are not only distinctly different characters that work well together, but also just a fun duo.

Tilly had a bunch of great moments in the show, especially early on when she burst onto the bridge after making an exciting discovery. “It’s freaking amazing. I’m sorry sir, you know how I get around violations of causality. Plus you said I shouldn’t curse when I’m on duty.” While Saru is a bit put off, Pike simply says “let’s determine more about this possible power source beyond ‘freaking’ amazing.” Just a really smart, subtle little bit of humor infusing the episode. I really enjoy Anson Mount’s take on Pike and that wonderful undercurrent of humor he keeps demonstrating.

As Tilly would say, “What the Frick?”

So, we’ve got Burnham on the run with Spock, Tyler and Pike developing a bromance, Tilly and Stamets saving the day (again), Georgiou asserting her dominance, the future sending back a probe with bad intent, and a Red Angel, possibly from that same future, perhaps sending a message to those 500 years behind them? It feels as though there are a lot of threads yet to be tied together, but an interesting conclusion feels like it’s going to pay off handsomely.

Episode 207 felt like a tipping point for this season’s action. I”m delighted to think of the possibilities all that we saw in this episode could ultimately mean. I’m hoping we can get Spock back on track soon so we get a lock on what’s going on with the Red Angels. Because that’s going to answer a few questions, including why they seem to be leading Discovery to moments of helpfulness previously only to possibly attack them in the temporal anomaly.