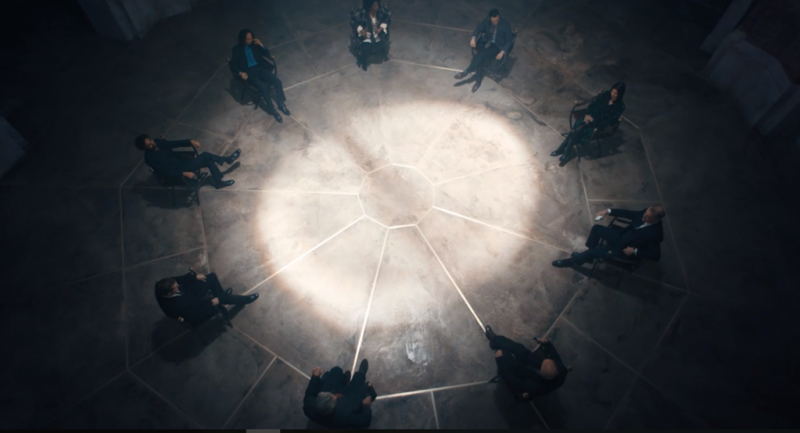 Matthew takes Diana home to his family castle in France; Sept Tours, which means seven towers. They hope to be able to get to know each other better while they are away from the intrigue and danger that seems to be growing in Oxford. This danger is growing and developing in Venice too.

It was great to see Sept Tours; the castle they used for the exteriors is perfect, although it is not in France. It is an 11th-16th century castle called the Castle of Monselice, in Veneto. Italy, 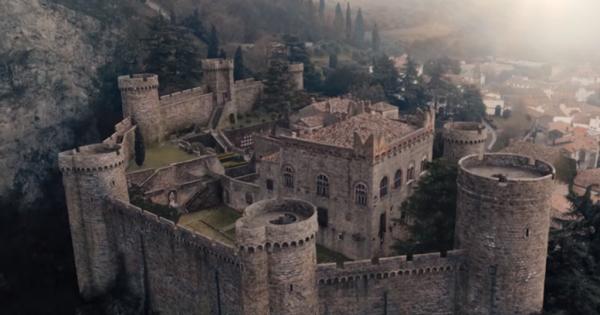 There were many key moments in this episode.

Ysabeau’s disdain and anger is palpable in the beginning of the episode. She doesn’t want a witch anywhere near her home, but she agrees to Matthew bringing her there because of her love and devotion to him. Ysabeau complains to Matthew in front of Diana, she wants her to feel uncomfortable. She is disgusted that Diana only speaks English and “new French”. Then when Matthew is trying to get into Phillippe’s office to do some work, he finds it locked. Ysabeau is nearby and tells him “I don’t want that room open while she’s here.” His response is that Diana didn’t kill Phillippe. But Ysabeau is having a hard time with that, “her kind killed him”. 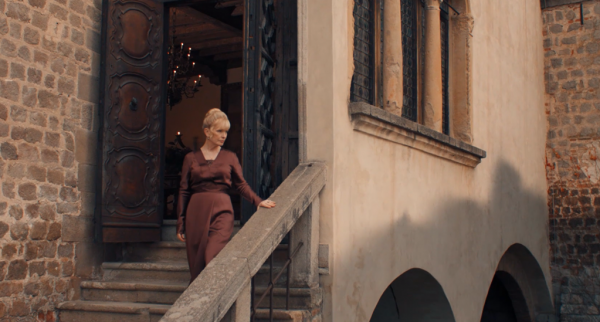 Despite Ysabeau’s efforts to alienate and scare Diana, she is not intimidated. Diana’s intuition and understanding about Ysabeau’s dislike of witches is just what she needed. Ysabeau tries to dislike Diana, but Diana is determined to connect with her.

Later on when Matthew tells Diana that he has discovered that her parents were not killed by humans, but killed by witches, she is devastated. She escapes to his tower where she once again hears her mother calling her when she is resting.

Diana then bonds with Ysabeau through the fact that they both had loved ones who were killed by witches. By the end of dinner, Diana has won Ysabeau over. They have a wonderful time relaxing in the living room and Matthew decides to wind up the Victrola (yes you read that right, he doesn’t plug his iPhone into a speaker) and asks Ysabeau to dance. Then he convinces a reticent Diana to dance with him. It is awkward at first but soon they are dancing beautifully and gracefully together and Diana is very happy, this is when they stop because Diana is glowing! I was looking forward to seeing Diana floating the way she does in the book, but I see why having her glow would be easier to film. 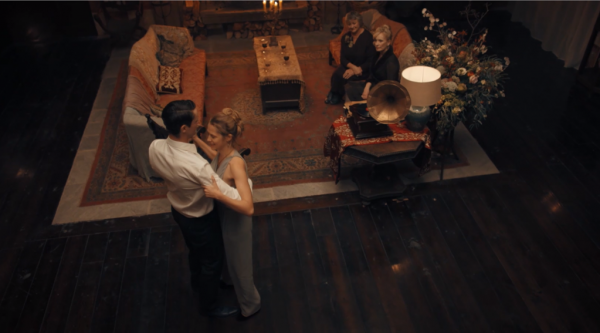 I love when they go horseback riding in the books and I love it in the show too. The horses are gorgeous. I did miss seeing her ride with her eyes closed. It would have provided a perfect opportunity for Matthew to be protective when he got angry with her for not being safe. It is also a missed opportunity for them to talk about her magic.

Marthe’s comment to Ysabeau is a small moment, but an important one. “I haven’t smelled such power in centuries, sweet and green.” Diana has lived denying her magic, but is finding that she has much more magic than anyone realized.

Meanwhile, there is more underhanded drama and manipulation happening in Venice with the members of the Congregation. 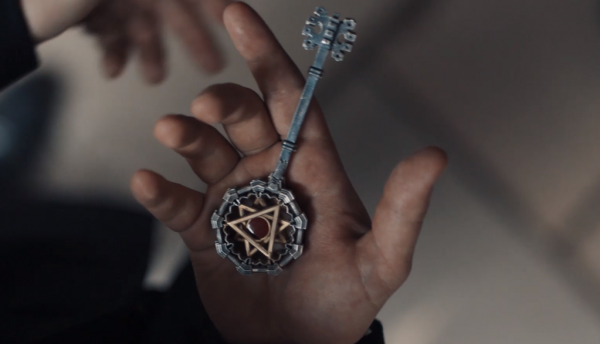 There is mystery and mistrust in every look. No one trusts anyone else. Knox has called the meeting so that he can ask for “help”; he is planning on convincing them that Matthew has broken Congregation rules. He looks right at Baldwin and tells him “your brother has abducted a witch”. This of course would be shocking and terrible if it were true.

Knox continues to manipulate the story so that it appears that Matthew is hurting Diana. He doesn’t realize that Baldwin knows about the book and is shocked when he says “she is the only creature who has found the book of life”. This is a fact that Knox has conveniently left out so that the rest of them wouldn’t know about it. Domenico volunteers to be the Congregation representative who goes to Sept Tours to find out why Matthew has the witch. Gerbert and Domenico are looking for an excuse to oust the de Clermont’s from the Congregation and to knock them down a notch.

The scene with Domenico at Sept Tours did not disappoint. He taunts Matthew trying to get a reaction from him. When he finds out that Diana does not have the book and he sees how protective Matthew is of her, he realizes that “it’s about her”. He is almost gleeful once he realizes that Matthew is breaking the Covenant which says that different creatures cannot be together. “Tsk tsk, you’ve lost your mind”. Matthew Goode is perfect here, his sneer and animalistic almost out of control look is frightening, but then he growls, making it even more intense. 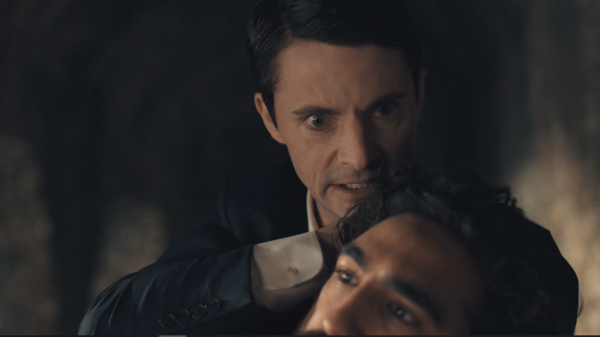 As a member of the Congregation, and the head of the daemon representatives, Agatha is in Venice too. Her instincts are telling her that Sophie’s alchemical discoveries and studies are related to what is happening with Diana and Matthew. She calls Sophie to ask her why she links the statue to alchemy. Even though the daemons are not given as much screen time, they are crucial to the story. Sophie’s intuition and instincts are the kind of brilliance that is part of what daemons are all about. She tells Agatha that the moon in the statue’s hair reminds her of the white queen in the alchemy books. The person she is supposed to give it to is in alchemy too. Sophie has had visions; she tells Agatha that “she is in a castle with seven towers. Seven is a key number in alchemy. There are 7 planets, 7 metals, and the transformation process has 7 steps. She is there with her with her dark king.” That has got to be Diana and Matthew, I can’t wait to see how this all comes together. 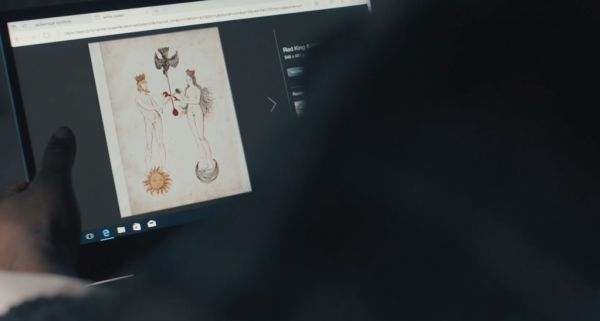 A lot happens at the end of this episode.
First, Matthew announces that they won’t be breaking the Covenant and becomes cold and distant.
Then he gets a call from Marcus telling him that the lab had been broken into.
He uses it as an excuse to leave but pronounces that Diana will not be going with him and will not be going to be with her aunts; he tells her that she has to stay there.
He looks at Ysabeau and asks her to guard her with her life. When she agrees, it is clear that Ysabeau is beginning to understand how important Diana is to Matthew.
Diana follows him and watches him drive away. She is devastated by his apparent rejection and begins to cry, this is when another of her powers manifests itself. Witch water, she makes it rain. I missed the tornado of water that happens in the book. It was such an emotional scene, it gave me chills. 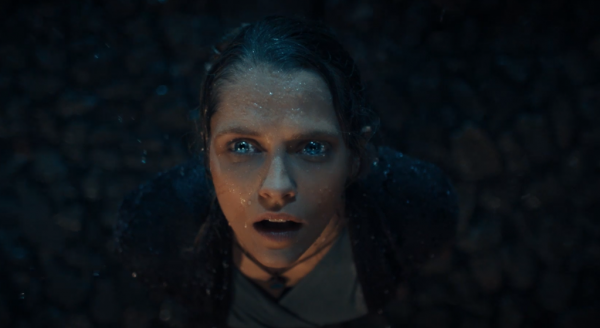 Tune in again next Sunday at 8 central for another episode of A Discovery of Witches.