Episode 2 is full of excitement and intrigue. Matthew and Diana make a connection. Witches are betraying witches. Matthew has cravings he must control. There are evil and scary vampires in Venice. And we meet a daemon. 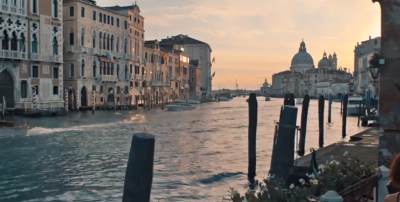 The episode starts in Venice adding another wrinkle to the story. The scenes in Venice are absolutely beautiful. I went to Venice last October for the first time and it is one of those places that live up to the hype. It’s really sort of magical. Each location and set is so special and beautiful that they end up being characters in the show too. So far we have the Bodleian, Oxford, Venice, and Scotland. In my episode 1 review I spoke a bit about the set for the Bodleian and how it was made. I can almost smell the leather and old paper of the magnificent books that are on the shelves when I am watching. The scenes of Oxford show the beautiful old buildings and the history that is in each building. And Scotland, the highland hills are stark and beautiful. I could almost feel rain and chill in the air.

In Venice we meet some new and frightening vampires. The first one we meet is Juliette; she is at a cafe and notices a man and entices him to follow her, when she calls him Matthew it rings all the alarm bells. Oh boy, will Juliette be as insane as she is in the books? Go Ask Alice is the music playing during this scene; it is a perfect background for her need or is it her addiction? Elarica Durand is beautiful and I like her as Juliette.

Hamish is the first daemon we have met in the show so far. He and Matthew have been best friends since their days at All Souls in Oxford. As a daemon, Hamish is brilliant and very intuitive and empathetic. He is one of very few people that Matthew had confided in about his fears and concerns. Matthew went to see Hamish after his run-in with Diana at the boat house. He needed to get away from her because he was craving her and it scares him. He trusts Hamish, and his estate in the highlands is a perfect place for Matthew to hunt, the chase distracts him. This is a scene that could be hard to do on TV. How would it be depicted? I think it could potentially end up being corny. My initial response left me feeling a bit dissatisfied. But after watching again, I like the way he chases the stag down and then approaches it and somehow seduces it to lie down. It was definitely a seduction and a surrender. 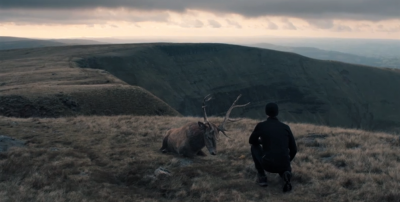 Satu and Peter Knox are up to their underhanded tricks again. They are in the library along with a bevy of other creatures when Diana goes in. It’s a bit disconcerting. Peter Knox approaches her and convinces her to talk with him by telling her he knew her mother. She always wants to know more about her parents, so anyone who can tell her about them has the potential of gaining her trust. They sit down together to talk and she seems to enjoy his company until he begins asking her about Ashmole 782. He tells her that it has the first spells in it and that it tells how witches made vampires and if they know how to create them then they will know how to uncreate them. Diana is horrified. I’m glad she was able to see past his attempt to befriend her to gain her trust.

There are two more vampires in Venice during this episode, Domenico and Gerbert. Gerbert is Juliette’s “father”. He is clearly a patriarch of the vampires. Domenico bows down to him and kisses his ring. Juliette is in trouble for killing the tourist. When Gerbert tries to get her to tell him what happened she lies about it. He has a deep ominous voice which is to be expected, but also somehow a bit absurd. It turns out that vampires can see the memories of the person whose blood they are drinking, so he aggressively drinks her blood to find out that she did kill the tourist whose name was also Matthew. Gerbert throws Juliette into a cell in a dungeon; she screams that he taught her to crave Matthew. This is an interesting turn of events. What will this mean later on in the story? Why would Gerbert make her crave Matthew? There is definitely more to this story.

Gillian is working for Peter Knox, she is very weak minded and easily manipulated. She is such a disloyal friend. She continues to try to get Diana to take the book out again and refers to Knox as a senior witch. Diana tells her that she doesn’t know how she got it and that she won’t do it anyway because she doesn’t trust his plans. Gillian switches to talk about vampires. She believes that vampires are bad and witches shouldn’t talk to them. Diana wants to know if she has ever spoken with one, of course she hasn’t. There is a major prejudice against vampires among the witches. Having an opinion about a group of people from hearsay rather than one’s own experience is ridiculous.

Diana goes running again, it is something she needs to keep her mind clear. But when Satu steps in front of her, Diana’s relaxation is clearly over. Satu magically “reads” her and realizes that something was done to her powers.  She then asks Diana if she fears persecution, her response is that she didn’t until now. I can’t blame her with all these people bothering her. Satu then tells her that it’s not just about the book it’s about you. What does that mean?! I think that we need to keep this in mind as the season goes on.

Diana calls home and asks Emily about Peter Knox. They used to be friends but then he got into dark magic. Her parents didn’t trust him and Emily tells her to be careful of him. That’s ominous; she needs to pay attention to this advice.

Matthew is worried that his interest in Ashmole 782 puts Diana in danger. Hamish is curious about the book too and tells him that suicides are increasing as are mental health problems with daemons. Everyone is in danger without the book. It would really help them if this book could explain their origins. Matthew’s response of “Yes, wouldn’t that be something my friend” is poignant.

Later on Hamish and Matthew are playing chess and Hamish wins. His comment to Matthew “there is more to the game than protecting your queen” is very important. Matthew realizes that he needs to protect Diana and rushes off. Hamish warns him to be careful and reminds him about the two women (warm bloods) whose lives ended in death after he lost control. Will he be able to control himself with Diana? 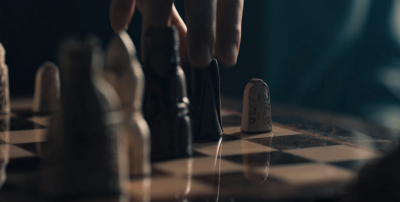 Diana goes to the professor’s cocktail party; she is shocked when she finds that Peter Knox is there to speak with her. He knows that a vampire has been talking to her, but he won’t tell her how he knows. She tells him that she won’t get the book. Knox then gets in hear head and threatens her, “don’t make me force you to recall that book”. She ends up screaming at him in her head and breaks the window he is standing in front of. For a witch without powers, this is an intense and powerful response. 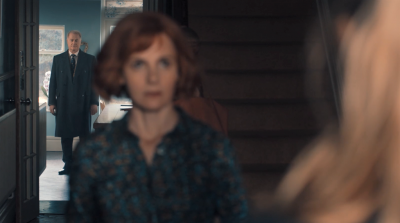 Diana goes to see Gillian looking for a friend to talk to about what is happening and finds Knox there. The betrayal she feels is palpable. She is so upset and begins putting all the clues together that point to the fact that she is in serious danger. Knox, Satu, Gillian’s betrayal, and the way the book behaved for her. She decides to go to see Matthew, I am glad she does, her instincts to trust him are good. Diana tells him about what has been happening, she is very anxious, and he is struggling to stay calm. Matthew asks her to calm down because her adrenaline is very high, and her heart is beating very fast. She does, and he is able to talk to her. She tells him that she doesn’t want Peter Knox to have the book. This is an intimate moment, they make a connection here. He shows her a book with a note in it by Charles Darwin. He knew Darwin. It will be fun to find out who all he has met in his 1500 year life. His expression while she looks at the book is vulnerable, I like that and this connection between them continues to grow. He is interested in how his theories about origins would apply to them (creatures), he had heard about a hidden book. 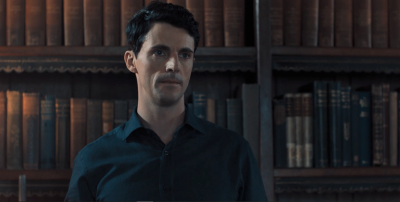 He tells her that he wants to show her his lab. They are studying DNA from all creatures and he wants to prove to her that creatures are dying out. Vampires are failing to sire, daemons are prone to madness, and witches are losing their powers. This is a lot.

While Matthew walks her home, they chat calmly. He tells her that two emotions keep the world running, those are fear and desire. Her response is “Magic is desire made real”. These are such simple words but so full of meaning for them.

Right before he leaves she tells him that the book is a palimpsest, there are old words hidden under new. After she describes what she knows about the book, he leans over and kisses her wrist. Something is definitely happening between them. I can’t wait to see how their relationship grows! 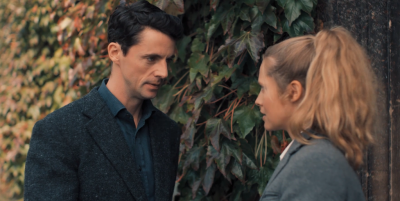 How are those of you who have not read the books enjoying the show? Is there any confusion? I’m loving it so far, and I am looking forward to the next episode next Sunday at 8pm central on AMC and BBC America.