BBC Studios has got something cool for artistic Whovians. Starting NOW you can enter your best fan art for a chance to have it featured on an official t-shirt. The winner and a friend will also spend a Who-themed weekend in London! Pretty cool, huh?

On top of that amazing weekend, the winner and four runners-up will have their original creations printed on limited-edition Doctor Who goodies to be sold at San Diego Comic-Con. All four will also receive a themed “goody bag” worth about $680. Even cooler now, huh? 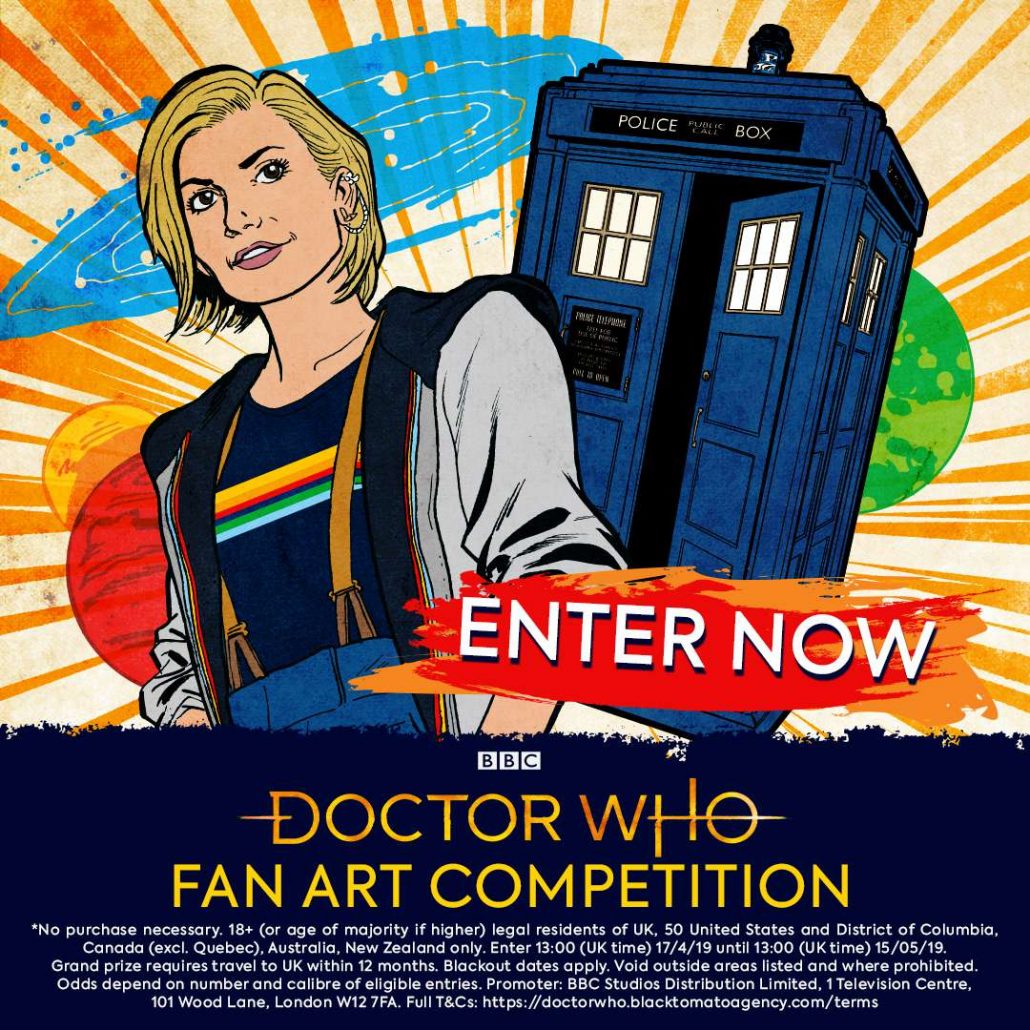 If your drawing hand is twitching at the prospect of winning this contest, check the full details in the following release from BBC Studios. Make sure to read everything carefully, especially the “Art Specifications” sectoin.

BBC STUDIOS KICKS OFF THE 2019 DOCTOR WHO FAN ART COMPETITION

NEW YORK – April 17, 2019 – Calling all Whovians with an artistic flair and creative impulse! Ahead of this year’s San Diego Comic-Con, BBC Studios announces the “2019 Doctor Who Fan Art Competition,” giving fans an opportunity to see their own work on a Doctor Who t-shirt, with a limited quantity available for purchase at the BBC AMERICA booth at San Diego Comic-Con.

As anticipation for the next season builds, Whovians can channel their creative energy into an innovative rendition of the TARDIS and their favorite Doctor. Entrants can create anything from a candy mosaic of Tom Baker to a bowtie collage of Matt Smith – the possibilities are endless! The competition opens on April 17, 2019 at 8:00am ET and closes on May 15, 2019 at 8:00am ET.

-Exclusive private screening of the fan’s favorite Doctor Who episode

All four runners-up will each:

-Have their artwork printed on official, limited-edition Doctor Who merchandise sold at San Diego Comic-Con

Art Specifications: Each entrant must design their own original piece of Doctor Who fan art in accordance with the following criteria:

-Artwork must feature both the TARDIS and one Doctor *

-The Artwork may also, at the entrant’s discretion, include a background texture, splash of colour or other abstract background design, but must not feature any other design element, including (without limit) any other Doctor, character, companion, monster, robot, prop, location, building or branding element (including third party brand names and logos), whether from the Doctor Who universe or otherwise.

-Artwork can be created in any two-dimensional medium and any color.

-Artwork must not include identifiers such as the entrant’s name, signature, image, likeness or any other identifier, or any reference to Comic-Con.

*Refer to the terms and conditions at doctorwho.tv/competitions/fan-art for more details on the criteria

Submitting artwork: Each entrant must complete the entry form and upload their artwork in digital format on the Fan Art Competition website at doctorwho.tv/competitions/fan-art in accordance with the following criteria:

Like this article?  Share using our social media buttons found both on the left and the top.