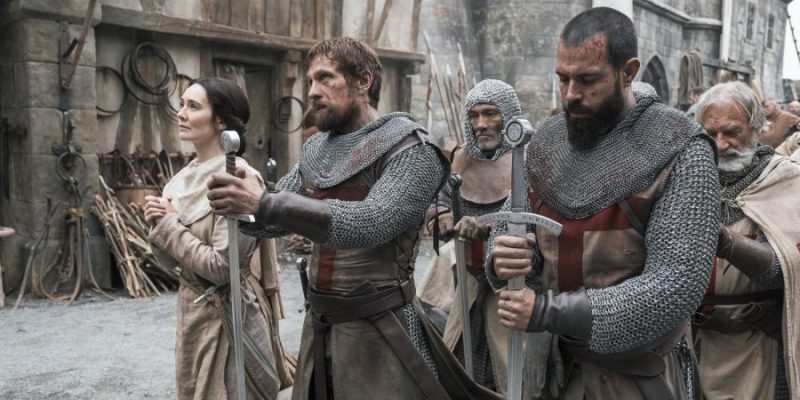 I’ll be up front and honest, I did not see episode 206 of Knightfall unfolding as it did. I knew there’d be a siege, complete with yelling, screaming, and the clash of battle, but I never for an instant thought it would end with King Philip standing over Landry with a blade to his throat. No sir, “Blood Drenched Stone” did not go as I’d imagined.

I guess, in my optimistic euphoria at the impending battle, I naturally assumed that Landry, Tancrede, Ann, Eve and assorted other Templars would find a way to not only exit the Templar Temple of Chartres, but make their way through Philip’s invading horde. Wrong! Landry’s dream from last episode of the death and blood in the temple came to pass, it seems.

As it turned out, the sally port that would seem to be the means of escape was used instead to gain access to the temple and, ultimately, the downfall of all inside.

A glorious victory for King Philip, De Nogaret, Gawain and Prince Louis…maybe. We’ll get back to Louis in a few, but for now let’s focus on what it all means. Landry had Philip at his mercy after quite the dive off a wall knocked the king from his horse, but once again Landry hesitated when the moment to strike arrived and, unlike his unwillingness to finish off Louis (with bolt through his side) in the previous episode, this time it proved somewhat disastrous. I suppose that, in all fairness, killing off princes and kings isn’t really something that’s easily done by a Templar. You know, honor and all that. It’s not like they’re highwaymen laying claim to your purse. They are the royal family.

And when it was over, when the Templars had surrendered to save their brother, Philip bent in close and hissed at Landry that he was “going home.” One can only imagine the pleasures of the tortured flesh that await Landry within the king’s castle. We got a little taste of his inquisitor’s skills with the temple’s grand master, who seemed to have kind of lost his will to live. So, Landry’s future could be filled with pain and suffering — depending on what Louis will do.

It’s clear that Louis now views his father in a whole different light given the revelation that Philip, not Landry, killed Queen Joan. And even in the climactic battle at Chartres, Louis could have easily finished off Landry – had him dead to rights – but instead simply injured him so that Philip could overcome him. And there was hesitation in his attack. Interesting, right?

So, when all is said and done, will Louis find an unlikely ally in Landry? Can they co-exist even slightly to reverse the advantage that Philip now has? It’s hard for me to see that path, but Louis’ merciful decision to only disable Landry, and his obvious new-found contempt for his father, offer up some interesting possibilities, don’t they? 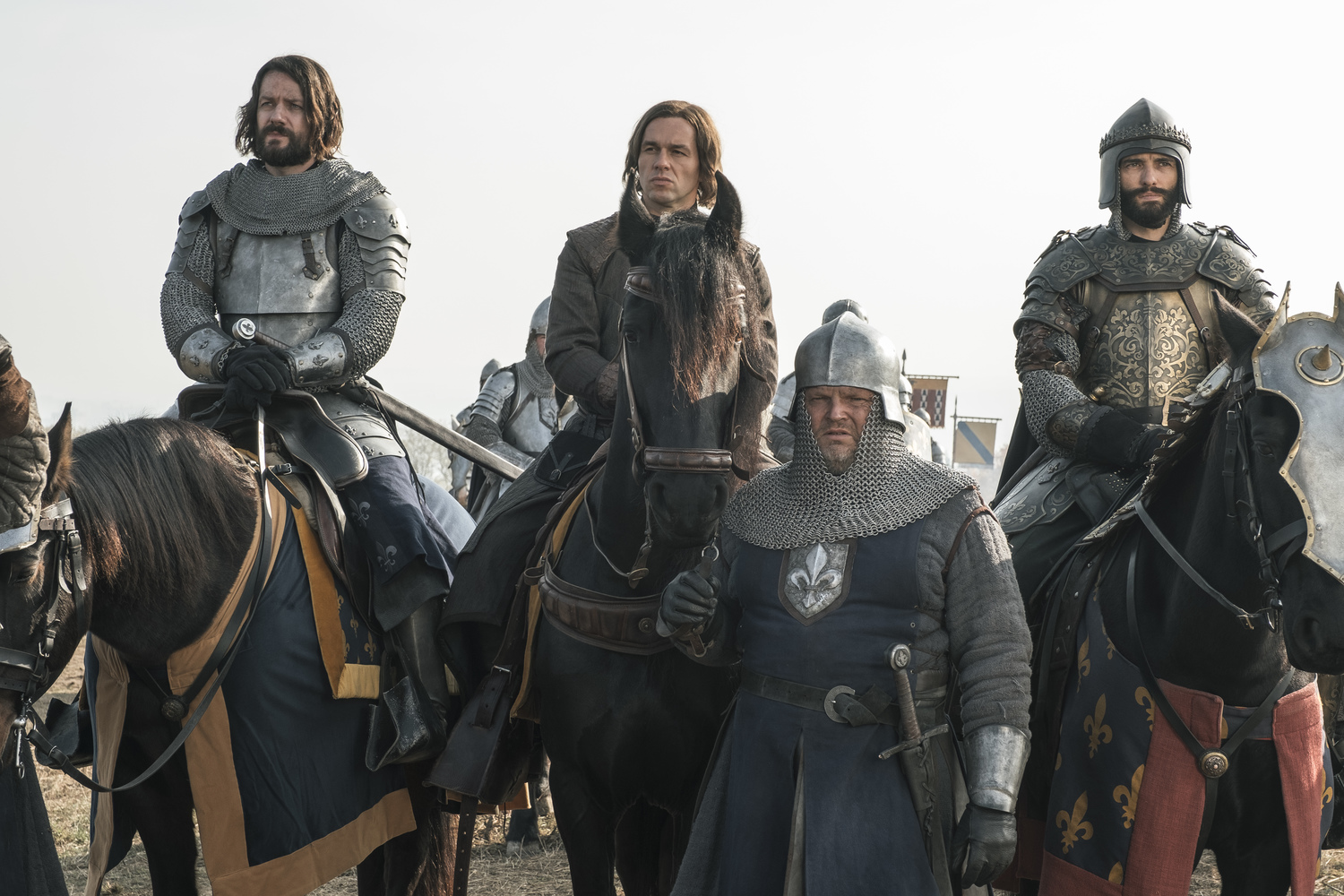 I thought the battle story line was kind of interesting in the early stages. It would seem the King Philip’s efforts were to be undone by the ingenuity of the Templars. First, their barrel of gun powder was too close and soon went up in a flash when a Templar arrow found its mark. Then, with a siege engine being constructed, the Templars were successful in a hit-and-run mission to burn it to the ground. Not really the kind of start you want when in search of retribution against the man and the order you hope to bring down.

Fortunately for Philip (and Gawain), the success of the siege engine attack came at a price – a young Templar captive (one of Landry’s initiate brothers) was taken and would prove to be the key to Gawain gaining access to the Templar stronghold. Faced with the broken and shattered remains of the Temple master sitting there (was he drooling?), the young man gave up the location of the temple sally port, something Gawain exploited with some gun powder and his own bit of stealth. Once in, the rout was on.

I admit that along with Louis, I’m kind of hoping that Gawain finds his way back to the light before this is all over. Right now, it looks like he’s perfectly happy wallowing in the darkness, but there’s something there that gives me hope. I know, with De Nogaret offering his guidance to Gawain’s efforts, it would seem highly unlikely. Yet, I don’t know. 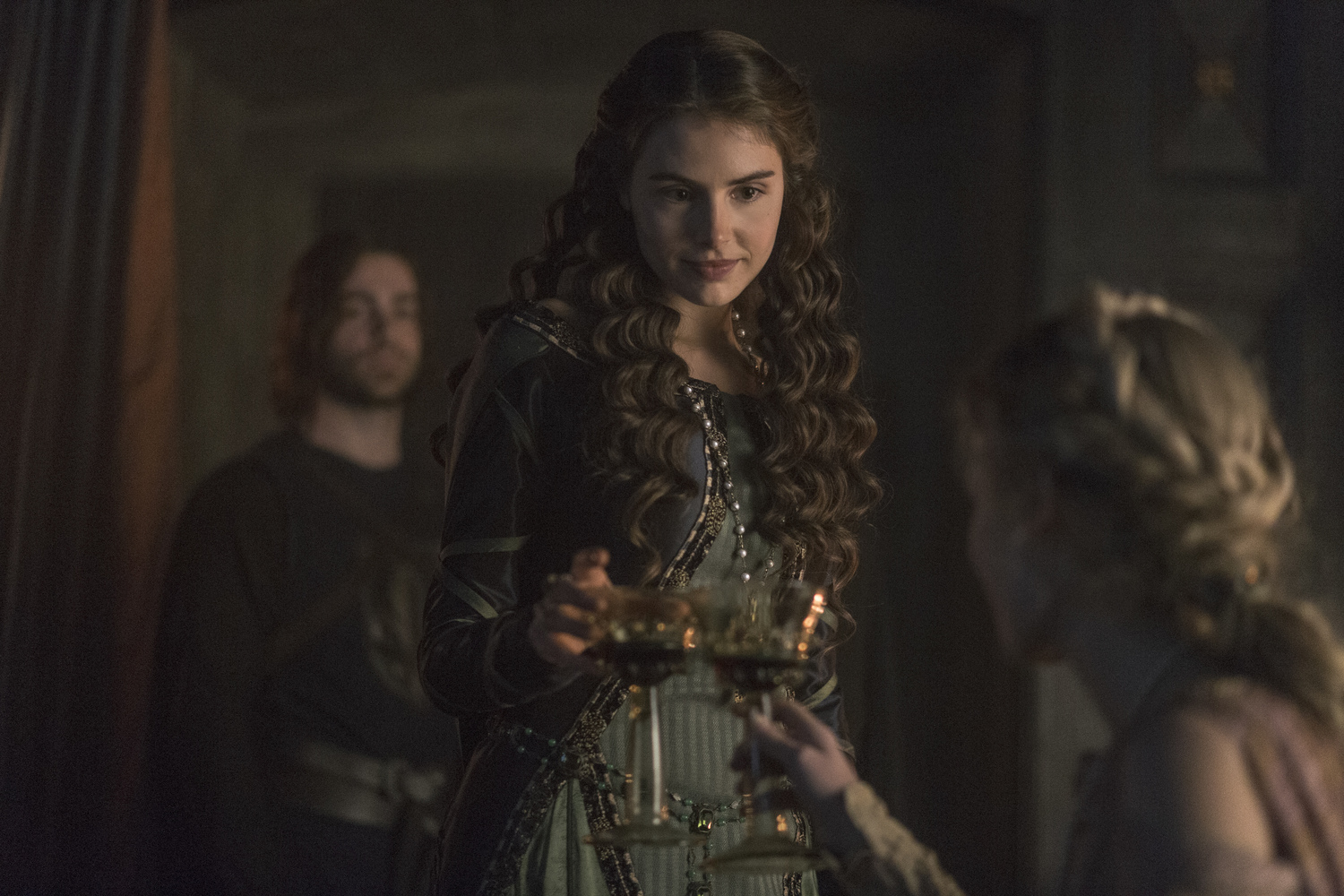 I thought it interesting that after a slow start to the season, Landry got to cross swords with Gawain, Louis and Philip in back-to-back-to-back episodes. Things are definitely heating up. I was hoping for Talus to ride to the rescue, but now I’m of the considered opinion that we’ll see him at the end, in a saving role. I don’t know if Mark Hamill is signed for another season, so let’s hope when he does appear this isn’t the end.

I do feel for Louis. It looks as through while he’s processing his feelings and emotions about his father and Landry, sister Isabella is stirring up some mischief (leverage perhaps?) back home with sister-in-law Margaret. Isabella drugs Margaret, then arranges for her two lovers to be there in Margarets bedroom in the morning. Did they violate Margaret or just want to make it look like she’d been naughty. Who knows, because Isabella then turned the tables on her lovers by having them killed.

So what’s Isabella’s game? Is she hoping to dupe Margaret into thinking she’d been indiscreet and therefore ruin her relationship with Louis? What’s to be gained by that ploy, if true? Isabella has obviously learned well at the knee of De Nogaret, so it should be interesting to see how this all plays out. As I said above, I fear for Louis as this thing comes to a head. I sense blackmail, intrigue, manipulation and more. Oh goody.

So now we are in the homestretch. Landry is in Philip’s clutches, Louis appears to be dealing with some internal discord (and more on the way), the Templar Order is teetering a bit, Eve is safe for the moment, and one must wonder where Talus is and what sort of force he will bring to bare on the whole situation? So much still to be unraveled in the season’s final episodes. I’m looking forward to it.