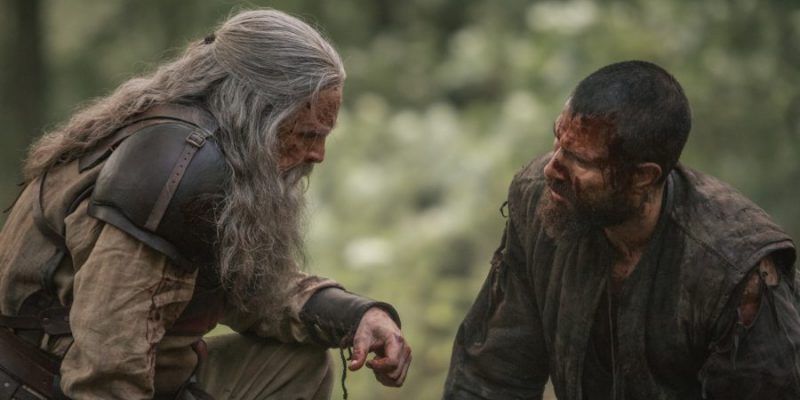 Faith, and the struggle to keep it, has always been an undercurrent within the show “Knightfall.” In episode 203, “Faith,” that struggle is on full display, particularly the highs and lows within that struggle for several of our main characters.

The high? Obviously, the bonding of Talus and Landry in the midst of the slaughter of the Lucifarians. Landry, at his lowest point, decides that God has forsaken him forever and sneaks away, loaded for bear, looking for a final showdown and, ultimately, death, from the Lucifarians. And it looks like that’s what he’s going to get after some fierce battle. Finally, with a large enemy standing over him with a battle axe about to split him stem to stern, Talus shows up and offers a glimpse into the formidable warrior he is.

When the bodies are spread hither and yon in the Lucifarian encampment, and Landry confesses his wish to die, we get a tasty little bit of backstory about Talus, didn’t we? Turns out that Talus and Landry are not so very different. Even as Landry had finally lost hope, Talus was once in that position. A prisoner for a decade after the fall of Acca, Talus admits to Landry that he had lost all hope and also wished to die. But felt God had saved and redeemed him for a reason, just as he had Landry – to look over his fellow initiate brothers and that “God’s light shines in you,” says Talus. 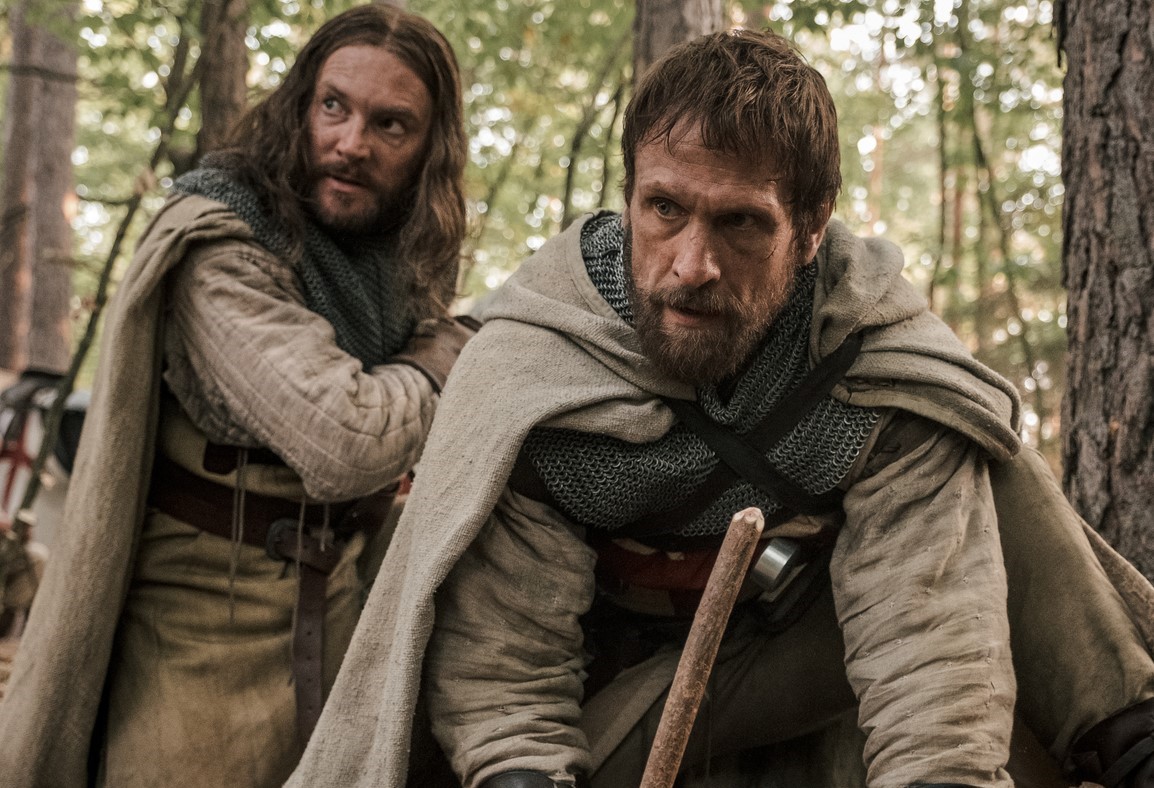 It’s a great moment between two men who seemed to rub each other the wrong way through the first two episodes. In the end, that which Landry was going through was something Talus was quite familiar with. So, the bromance between Talus and Landry has, in effect, commenced.

A great scene with Talus riding into the Templar temple on his horse with Landry. Together, they dismount and fall before the cross to offer prayers as the other Templars look on. It was that “moment” when Talus essentially gave his approval of Landry’s quest for redemption within the Templar order. I’m sure his rescue and prayer of Landry will go a long way toward the others (that’s you, Berenger) starting to accept Landry into their midst again. All-in-all, it was a nice bit of storytelling and backstory.

The work between Mark Hamill and Tom Cullen is really nice and layered. Talus, it turns out, is not quite who we thought he was. And the idea of Landry trying to get himself killed seems perverse given all he’s had to overcome. But bonded by their mutual trials and struggles with faith, it looks like it’s only a matter of time before Landry and Talus draw swords together. Toss in Tancrede and we’ve got a troika of formidable warriors – which will be needed given King Philip’s lust to exact bloody revenge on the order.

So, hopefully we get a royal rumble going with the team of Talus-Landry-Tancrede squaring off at some point with Philip-Louis-Gawain. Talk about a fun little set-to that would be. Let’s keep our fingers crossed, shall we. 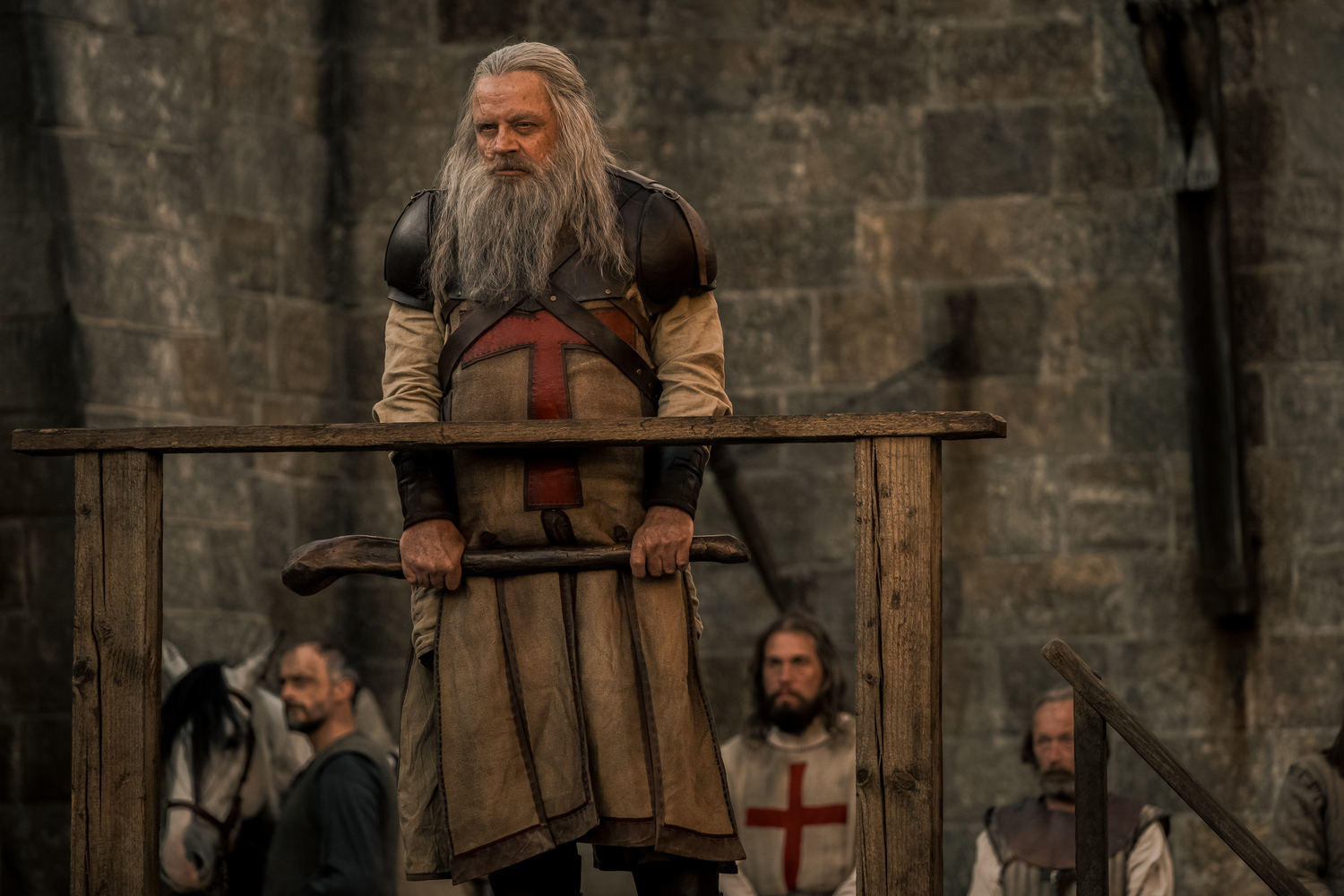 Speaking of King Philip, he would seem to be continuing down the path of nuttiness. I love how passionately obsessed he is with hating Queen Joan and Landry. The meltdown he had in the thrown room, when he took an axe to the queen’s chair and destroyed it in a passionate frenzy, then calmly tossed a bit of the chair into the fire and said “bit chilly in here” when De Nogaret and Raymond walked in – glorious.

Just a great example of how Philip continues to bounce between crazed and calm as he deals with all that he’s endured. I admit I feel for him on some levels. The man has been emotionally gutted by the two people he loved and trusted most.

Philip wasn’t too kind to Gawain, was he? Called him a “half man” because he could fully bend the knee to the king. It’s interesting to watch Gawain’s expressions so far. He’s almost a completely blank slate. He doesn’t get riled, he doesn’t snap back, he just has this…almost a serenity about him. It’s a little creepy because you wonder what’s going on under the surface of the former Templar.

We saw it again later when Louis was poking and prodding him about his loyalty and feelings about the Templar temple now being in his hands. Gawain is a man with no faith left.

Again, Gawain just goes with it. Calm answers to passive-aggressive questions, then finally grabbing the sword with his hand ever so firmly to offer a blood oath to Louis and Philip. No emotion, no demonstration of pain as the blood trickled from his hand. Is Gawain so very dead inside as he appears, or has he simply lost everything he once believed in that he truly only believes in steel, as he noted? Very interesting, this new Gawain. I wonder how he’s going to play out. Obviously, a large and ugly battle is coming by the end of this season, so we’ll see what part he plays in that. 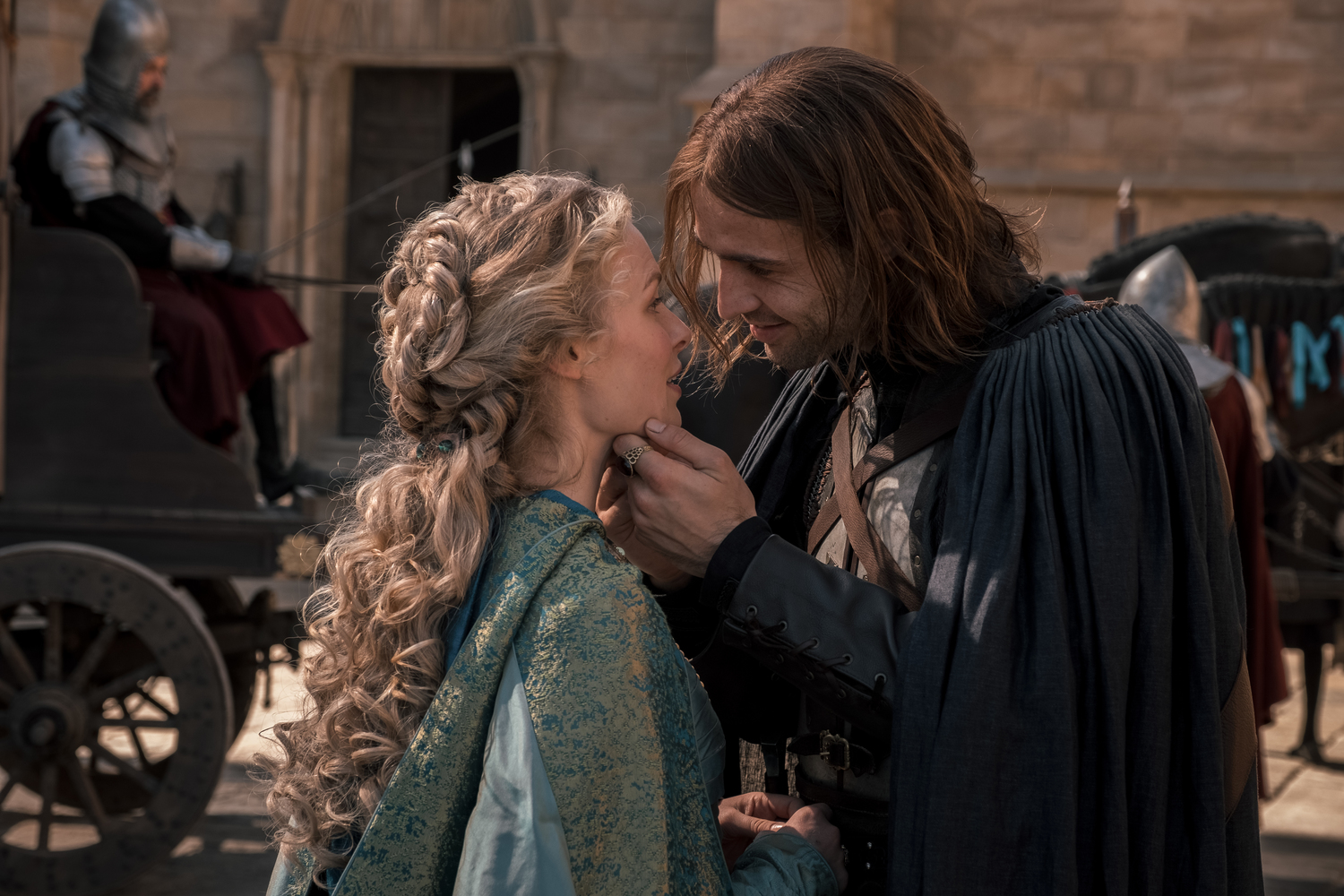 Also of note, Gawain seemed to be getting a medieval equivalent of a cortisone shot in the knee. The “Persion Poppy” mixture seems to alleviate Gawain’s knee pain and issue, giving him a nice bit of limber energy. I suspect it also gives him a bit of a high, the thing being made of poppies and all. I thought that was an interesting little story arc right there.

You wouldn’t expect that type of “technology” to be available in this time period, but it’s a nice reminder that even back then, people were creative and showed great ingenuity. And it looks as thought Gawain is a beneficiary.

An interesting dynamic is starting to manifest itself with Isabella. Turns out Louis is married and his wife, Margaret, makes her first appearance. She and Louis demonstrate an amorous desire for each other in the courtyard, so you feel that they have a pretty nice little love story going on. What was more interesting to me, though, was the interaction between Margaret and Isabella. While Margaret may be too caught up in her impending rise to queenhood in the future, her enthusiasm was less enjoyed by Isabella, who I suspect felt a little patronized by her sister-in-law’s gushing about that inevitability.

Notice the look Isabella had as Margaret wend bounding off after their little “sister” talk? Mmm, methinks that lessons learned from De Nogaret may not go to waste on our little princess. She has demonstrated an interesting ability throw off the pretense of youthful innocence for a more sinister tack when she felt wronged. The scene between the two made it seem that we may be headed in that direction again. 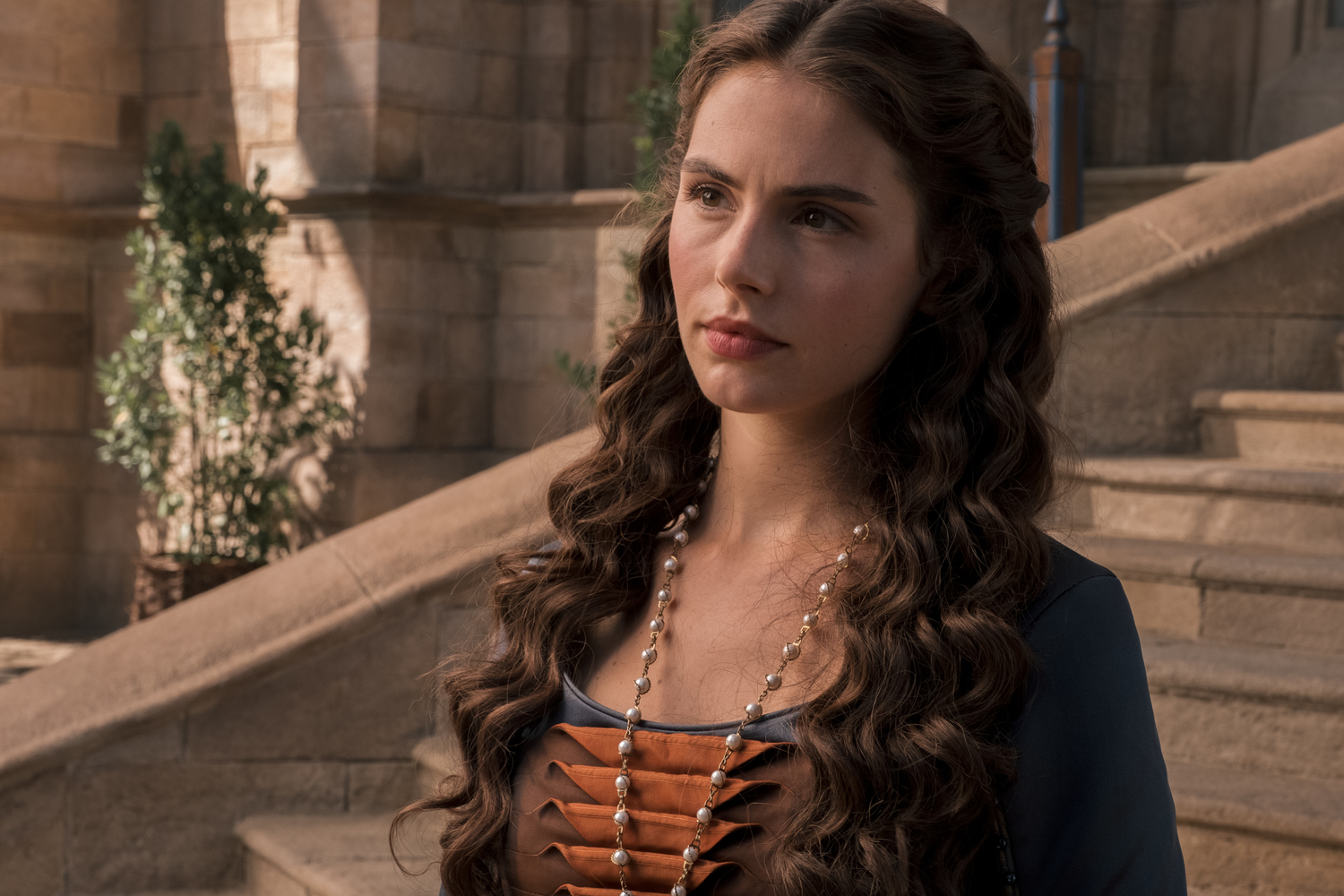 We also discover a bit of pressure being put on Louis to produce an heir. He’s having some performance issues, it would appear and ‘Dad’ doesn’t make it any easier by questioning Margaret’s loyalty, then suggesting that the throne can never be vacant and that if Margaret can’t give him children, Louis should find someone who can. Ouch! King Philip certainly has some issues with women, doesn’t he? And Louis apparently has some issues of his own. Interesting little conversation right there.

One of the interesting aspects of this episode for me was the opening scene. Landry is drenched in blood, his sword dripping with it, and piles of bodies lie behind him in the courtyard of the Templar Temple. It turns out to be a dream, but I wondered if it portends the future for the Templars and Landry, or if the dream was simply Landry kind of projecting what he feels he’ll bring on the Temple and Templars.

And was that the genesis of his decision to ride out and let the Lucifarians kill him? It was a powerful, powerful scene and one that we should keep in mind as we move forward in season 2.

Three episodes in and the stage for conflict, conspiracy, betrayal and a good old-fashioned bloodshed is nicely set. And congratulations to Raymond who is about to be the new pope. He should be a fine shill for Philip within the church. Obviously, he’s a man who takes the vows of celibacy as more of a guideline than a rule. Watching De Nogaret pull him by the hair out of the bath was a nice little reminder of who is in charge and, more importantly, who isn’t moving forward.