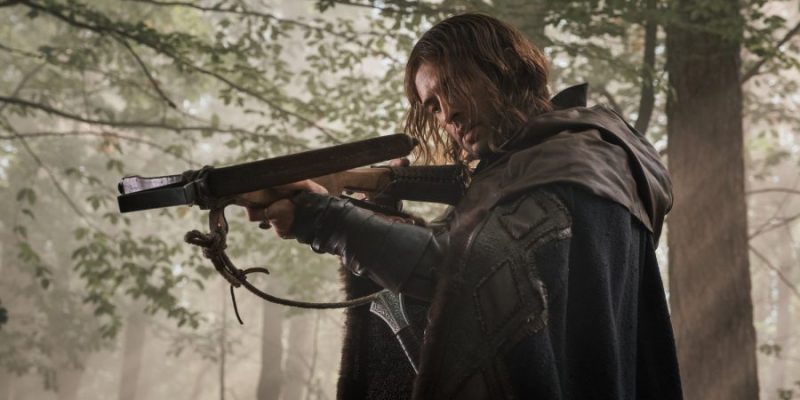 Knightfall: The Creation Of De Nogaret, Death Of A Pope – Review, Ep. 202

I’ve said often in this space that I really enjoy backstory for the characters that intrigue me. Hence, a show that takes the time to give us backstory on its major characters, a backstory that illuminates some of who they are now, is a show that fills my empty entertainment cup nicely.

And I got my cup filled to overflowing in episode 202 of Knightfall. “The Devil Inside” was an apt title for the episode as we got the chance to delve into the psyche and, ultimately, motivations of William De Nogaret – counselor to the king and all-around manipulator and opportunist. Just my kind of guy, really.

However, in my weekly revulsion at his scheming and general sycophant-like demeanor, I yearned for a little peek into how this De Nogaret came into existence. And having been given a peek behind the De Nogaret curtain, I find myself a little less driven to dislike him – even though I love this character. You know what I’m getting at, right?

As a boy he watched on in horror a Father Benedetto put his parents to a fiery death for their Cathar beliefs. Now, how would that not bend a young man to a decidedly negative mindset. As we found out, he lived in the gutter afterwards until his uncle found him and helped teach him a host of “unique” skills. From humble and horrific beginnings to a place at court as an adviser to King Phillip – not a bad rise, right? 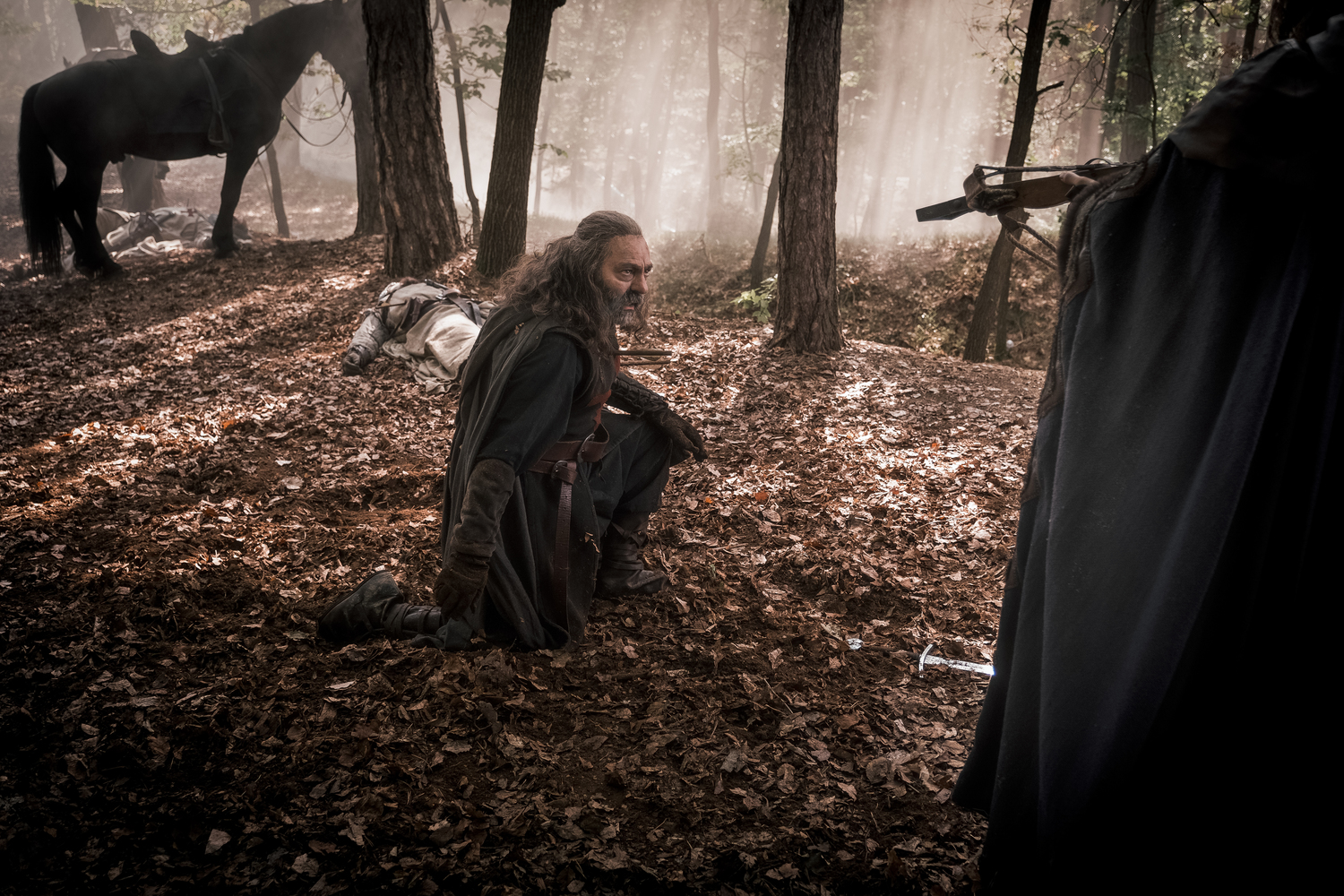 But really what made the story of De Nogaret so satisfhing was watching him strangle Pope Boniface to death with his own jeweled neck chain. Turns out, Father Benedetto eventually became Pope Boniface, which led to a wonderfully intense and illuminating revelation about their lives being intertwined. I can only imagine the elation De Nogaret felt as he chocked the life out of the man who burned his parents to death.

His final act, putting his parents ashes in the sign of the cross on Boniface’s forehead was, in a word, brilliant. While we wonder about the fate of Landry, King Phillip, Prince Louis, Tancrede and even Gawain (back in De Nogaret’s employ – or is it he king’s?), I found “The Devil Inside” to be wildly satisfying from a story standpoint. Of course, it was inevitable the Pope Boniface would meet a grisly end after offering the ultimatum, “submit or be damned,” to King Phillip.

As De Nogaret so eloquently asked of the Pontif before dispatching him, “What did you think would happen?” True, true, De Nogaret. Pope Boniface went for a power play and, in wonderfully hideous fashion, found that his past really did catch up with him. And with changes at the top of the church, my guess is King Phillip is going to get a much more “reasonable” Pontif with which to work. Should be interesting. Templars are about to be set up, I deduce.

So here’s to De Nogaret and the scintillating life Julian Ovenden pumps into him each and every episode. If loathing you is wrong, I don’t want to be right, De Nogaret. Carry on and enjoy your close relationship with Prince Louis, who seems to have a warm spot for you, too. 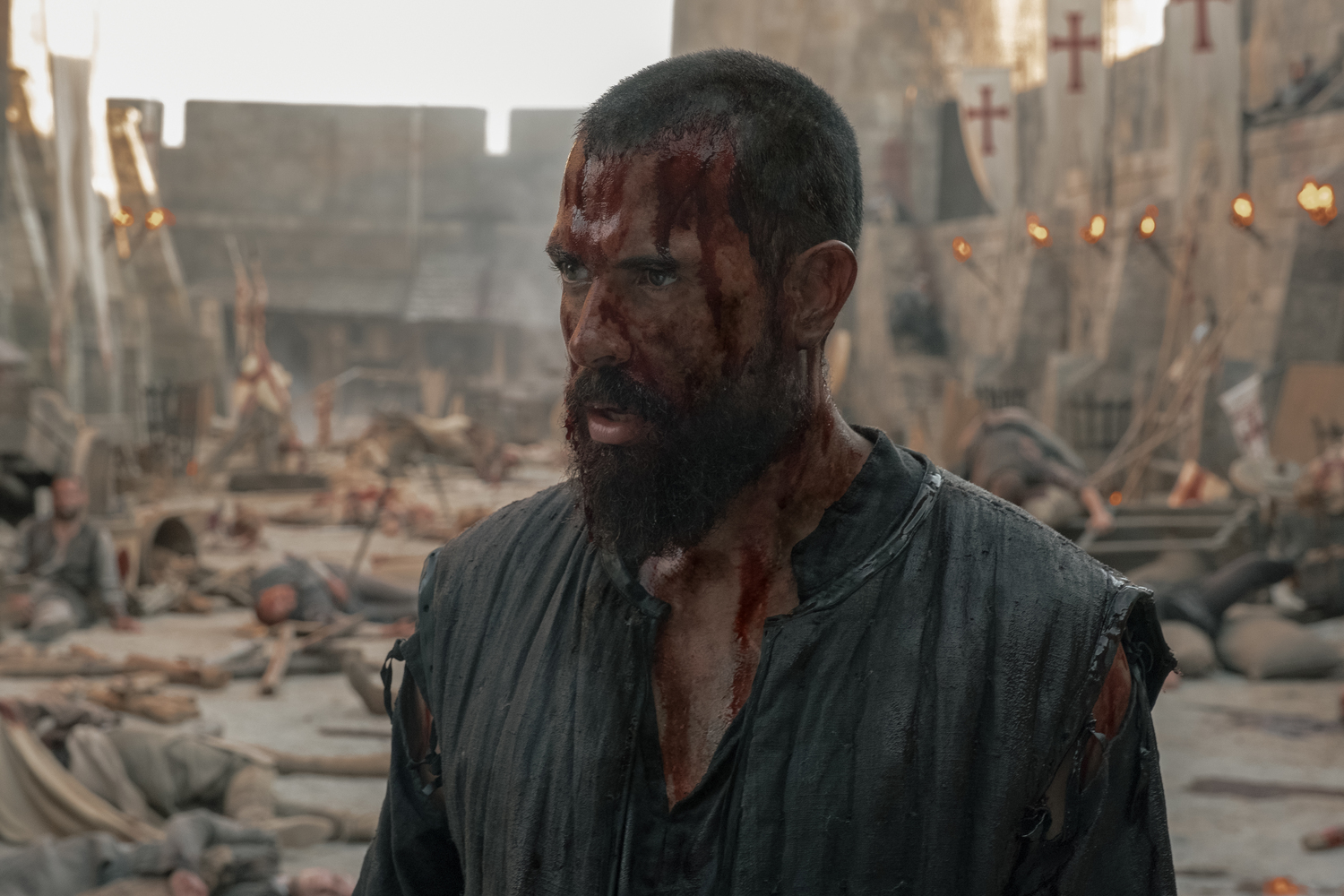 Speaking of Prince Louis, it’s clear he’s been tasked by dad to hunt down all the adopted newborns in the kingdom and, you know, kill them – and their parents as well. Louis seems to have a very intense sense of duty to his mother’s memory and if he and dad don’t always see eye to eye at times, that’s alright, too. And who are Louis’ masked compatriots? They seem to have formidable skills as well.

It has been interesting to see King Phillip’s obsession over what he has undergone at the hands of Landry and Queen Joan. Talk about a guy who has developed almost a psychotic hatred of both of them. In fact, I’m beginning to get the real impression that he’s losing it a bit. The obsession with Landry, Queen Joan, and now the bastard child is now in full rage.

There’s going to be a lot of innocent blood spilled in searching for the child, and as Princess Isabella found out, dad will brook no dissent moving forward. Here, let me squeeze those cheeks a little harder, my daughter. I suspect dad has an issue with trusting women and his “tender” moment with his daughter was an example of that. We’ll see how that all plays out in the end.

Let’s face it, most of the misery going on right now can be directly traced to Landry. So I am watching with fascination as he begins initiate training under the crusty, hardened guidance of Talus (Mark Hamill). Honest to God, every time I see Talus I think he should be riding the deck of a pirate ship on his way to do some drinking and wenching at Tortuga. Love this character and that hardened shell he shows the initiates, though I suspect that below the surface lurks a complicated and smart Templar. 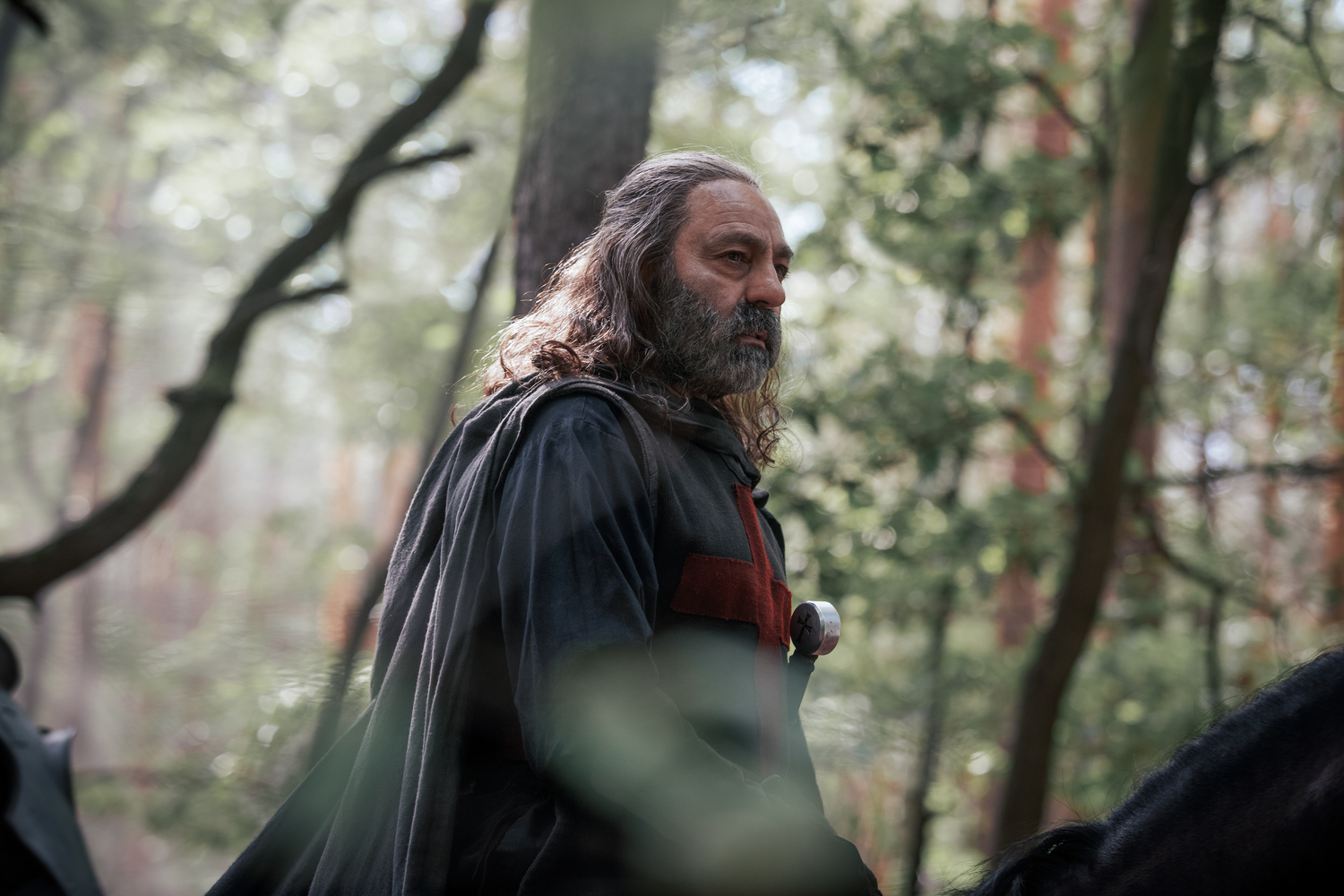 You got a bit of that vibe in this episode as Landry figured out what needed to be done to overcome a physical test he and a small team of initiates were given. “What are you waiting for, you’re balls to drop? Climb that wall you pissant slugs.” While everyone else slips and slides, Landry hangs back and ponders this clue from Talus, “Look to Psalm 133 for guidance and climb that F…… wall.”

Landry’s solution, a human ladder, is successful and we get our first taste of Talus, perhaps, recognizing something special within this former Templar who has fallen so low. As noted last week, I’m really curious about how the Talus-Landry relationship develops, because I’m almost positive it will. Hamill and Tom Cullen have a wonderful little chemistry working here and I have to believe that they will find in each other hope and optimism for life at some point. Of course, that’s if Talus doesn’t get killed first.

I mean, we lost Draper, too. The Lucifarians make an appearance and we lost our first initiate. Then when the Templars go out to meet the threat, Prince Louis and his knighted ninja squad ambush the Templars and they all die, including Draper. Loved this character and was a little irritated to see Louis put a bolt through his head. Dang it. I know, Landry, it was painful. I feel that pain, too.

As Landry has been on this very painful, very ugly journey toward attempted redemption, his pal Tancrede has been a source of strength and support just about every step of the way. You know, we got some hints about Landry’s possible lineage long ago and I can’t help but wonder if Tancrede has been tasked with helping his friend toward some interesting sort of destiny. 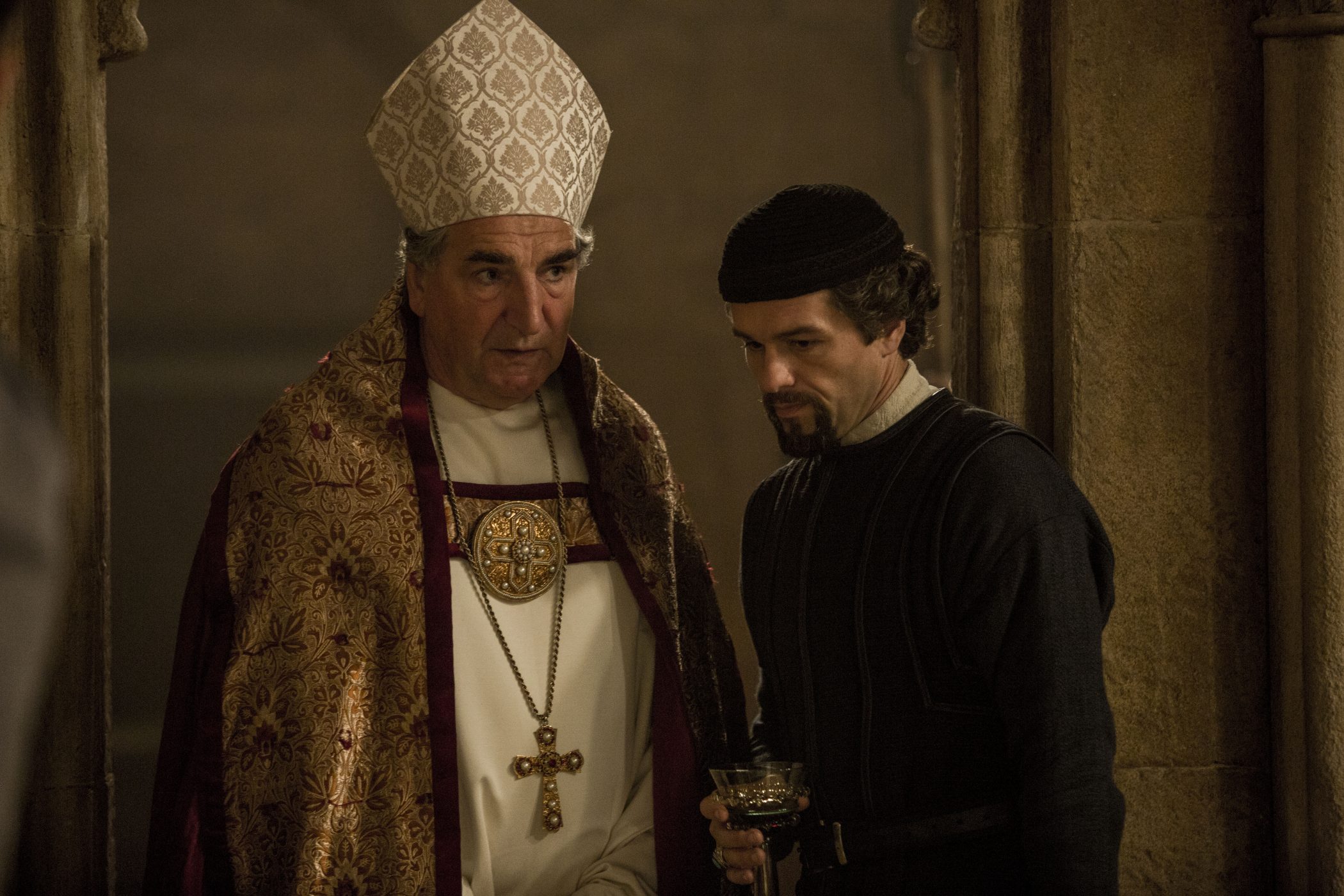 Fortunately, we got a little peek into Tancrede in episode 202 when he visited the convent, ostensibly to deliver a newly created decorative Bible, but it was clear that one of the nuns, Ann, meant something more to him. “I’d almost forgotten…how your eyes appear by candlelight. It’s like they’re filled by fire,” Tancrede tells this young woman, which makes me wonder if the vows of celibacy weigh heavily on Tancrede, too. Perhaps that weight helps him understand what has befallen his friend Landry?

The moments in the convent with Ann were very interesting, moreso given that Landry’s daughter Eve is also there. Obviously, Ann and her sisters at the convent are completely trusted by Tancrede. It also makes me wonder about the baby’s lineage through Landry once more. Anyway, we need to keep an eye on Tancrede, Ann and Eve as Louis stalks the countryside killing off newborn babies.

Two episodes in and I am acutely aware of why and how much I liked this show in its first season. I dig period pieces anyway, but there’s such a gritty reality to all that seems to be going on here that I’m drawn in quickly and invested in many of the characters – even those that are being killed. Sadly, given Knightfall’s grit and vibe, more blood it likely to spill before it’s all over.