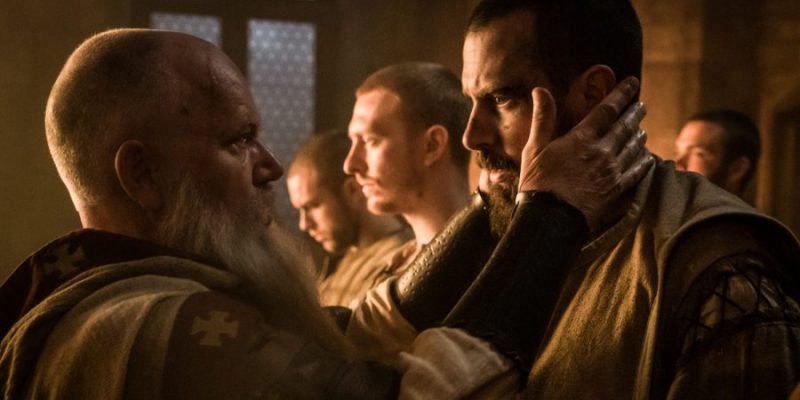 At last, the testy face-to-face we’ve been longing for arrived in the latest episode of Knightall. “Equal Before God” delivered unto us, the fandom, the first clash of steel on steel between Landry and Gawain in a while. And to make it even better, Landry did a little flaming sword action to get things off to the proper mood. These two gentlemen, once comrades-in-arms, really don’t like each other at this point. Fortunately for us, we got a small taste of that animosity in Ep. 204. And it was satisfying.

Not as satisfying as a full-on, “let’s get it on” type battle I’m fairly confident we’ll see down the road. But enough to whet our appetite for these two to clash hard and heavy down the road. It was glorious, I tell you. glorious. I’m getting a little fired up just thinking about it.

It’s interesting to me because in the show’s opening scenes, we see Gawain delivering a painful lesson to a pompous French knight who bullied one of the foot soldiers. The Knight knocks the young man down and delivers some entitlement trash talk his way, prompting Gawain to act. He throws the knight from his horse, administers a lesson in nimbleness (not bad for a gimp) and then slaps the knight around before reminding everyone that the only way to defeat the Templars is to work together. 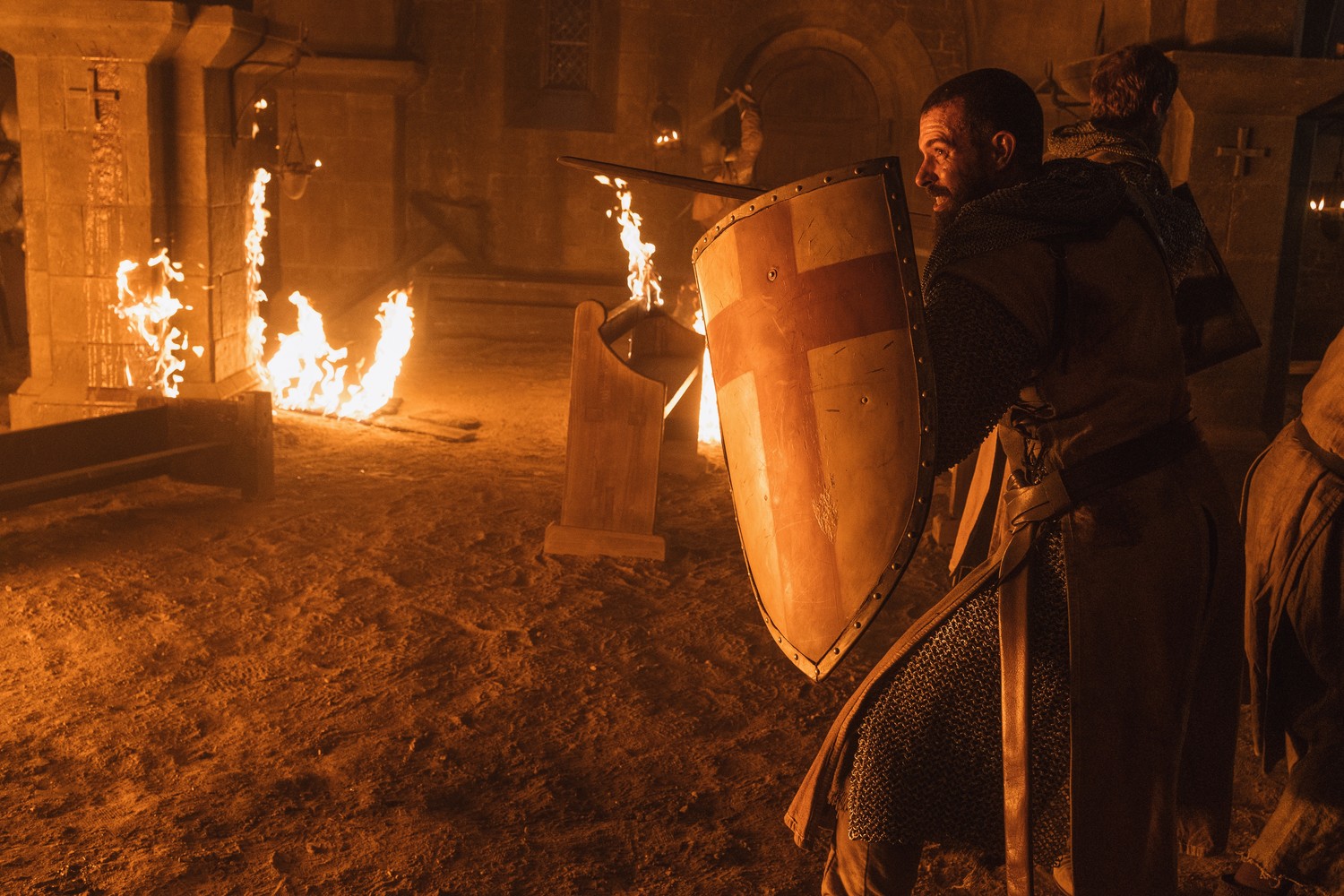 I think King Philip was somewhat impressed, though he seems determined to revel in the anger that is consuming him. Still, Gawain’s moment of honorable conduct was a subtle reminder that he’s still got a little of the good stuff inside – even if he doesn’t want to let it see the light of day. But again, he did it all with a kind of detached, glassy-eyed look. Perhaps the Persian Poppy concoction in his knee is also affecting him mentally. Who knows?

Episode 204 also introduced us to the Leper Knights of St. Lazarus. The French are trying to keep word of Pope Boniface’s death away from Rome for a while – you know, control the narrative and all that – and Gawain and some of his French troops attacked the Leper Knights as they attempted to get to Rome. One knight, Gabriel, whom Tancrede and Landry know, made it to the Chartres temple to alert his brothers.

What we see from the new additions to the party is great kindness and grace, something that will eventually turn the attitude of one initiate around. Well, initiate isn’t the right word anymore, is it? But I get ahead of myself. As we see, Landry has earned his way back into the Templar order. Apparently, the final test is a bare-knuckle brawl with a fellow Templar. Seemed satisfying and certainly had to be a moment of relief as Landry’s redemption road tour continues apace. 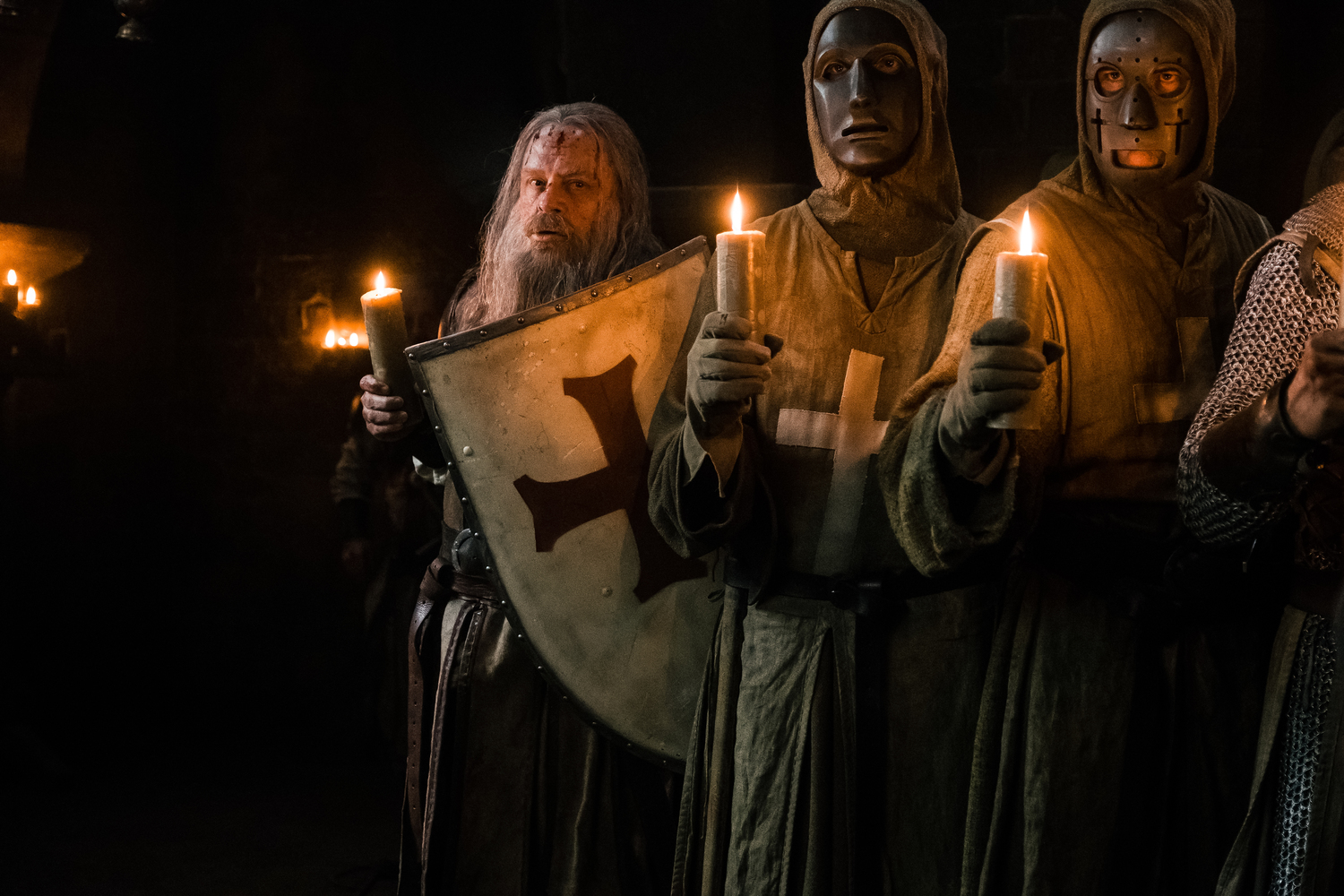 So he and the other initiates are now ‘brothers’ within the Templar order. We knew it was coming, but in Ep. 204 we see the fulfillment of Landry’s hopes.

So with that in place, Tancrede, Talus, Landry and the other former initiates (including Ron, who has bone to pick with lepers in general), escort Gabriel back to the leper temple. Unbeknownst to them, Gawain has reported that a wounded Leper Knight escaped the blockade (Gabriel). King Philip, given his state of mind, decides that one “traitor” equals “all” traitors, so the Leper Knights must die. He sends Gawain to do the dirty work. At this point, the titillation of what we suspected is about to happen was delightful. I mean, you could just feel the vibe of violence between these two growing.

And at last we had it. Gawain and his troops come knocking at the Leper Knights door and a pitched battle ensues. I love that the creators gave us a little taste of the Gawain-Landry showdown. Ringed by fire, the pair went at each other within the temple walls. Men are dying of sword, axe, spear and fire, but once these two lay eyes on each other, it’s all about them.

They swing and slash and in the end, the temple of the Leper Knights holds and Gawain’s forces are beaten back. However, as we see, the mystery of where Landry is has now been solved. And when Gawain bursts into the throne room during meal time and exclaims, “Landry,” you can see the wheels in the kings head really start to turn. It’s at this moment, I suspect, that the road to total war is upon everyone. 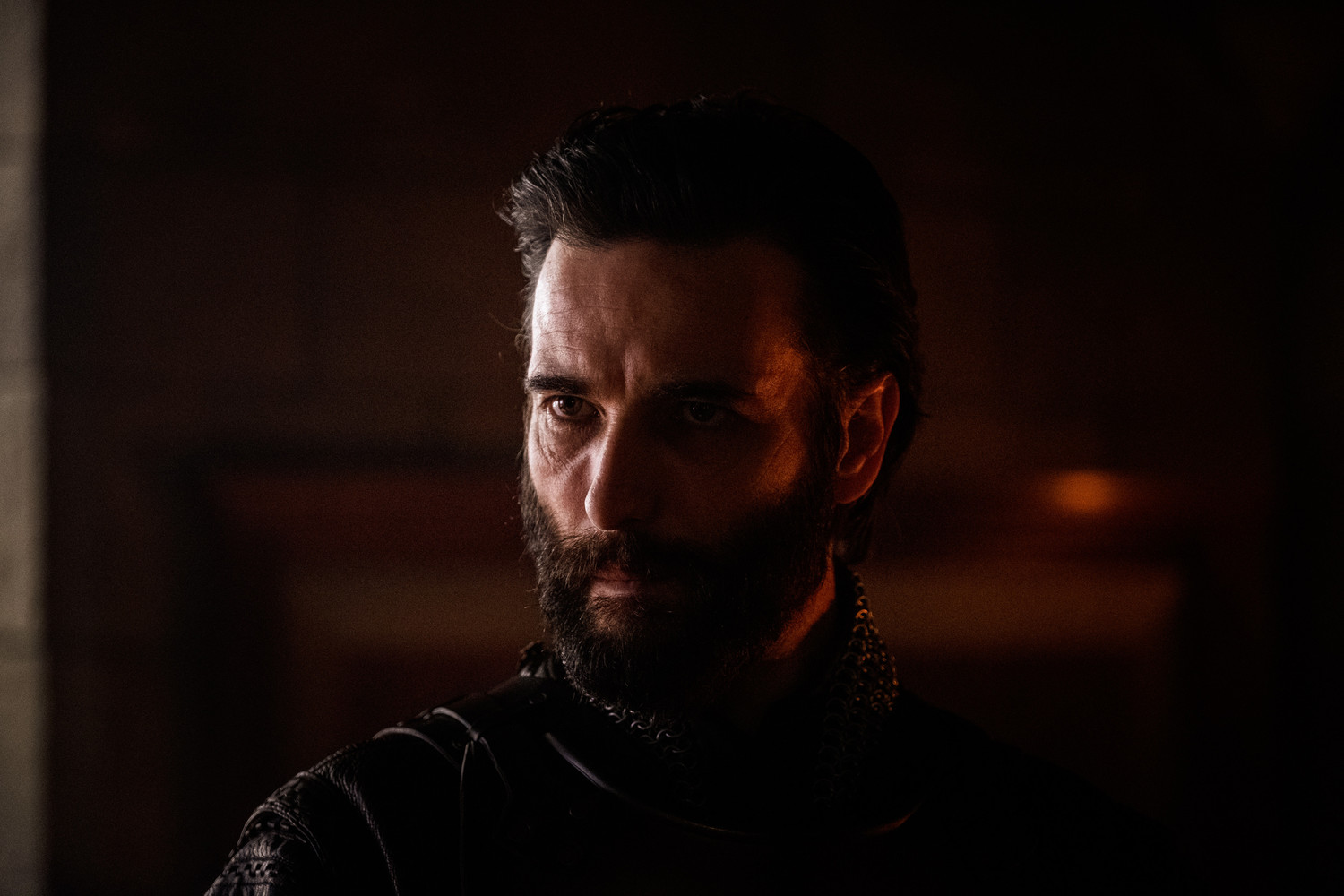 Talus knows it. As he says, he doesn’t want to be caught unprepared, so the word is going out to the other Templar temples in France – King Philip is coming for war. I mean, let’s be honest, it’s a war that Landry really ignited, but that minor fact doesn’t bother me in the face of some spirited battle to come. In some ways, the thoughts voiced by his Templar brothers during their discussion of Gabriel’s message was right on, concerning Landry. Not everyone in the Chartres Temple is feeling brotherly love to the new Templar Knight. Wonder if that’s going to come home to roost a bit later on?

As much as the sanity of King Philip worries me, it is obvious that Prince Louis has some things bothering him as well. He hasn’t been able to conceive an heir with wife Margaret yet, and in this episode we see that he’s now suffering from some “performance” issues. As with any man, the source of that is complicated, but he manages to excise that little issue from an unlikely source.

As De Nogaret and the king attempt to discredit the Templars in the court of public opinion, a face from Louis’ past appears – the woman whose son he killed in the last episode, is asked to testify to the Templars evils (Remember, Louis and his henchmen are dressing as Templars on their murderous raids). While doing so, she spots Louis, recognizes him and before she can accuse him, he’s on the spot. 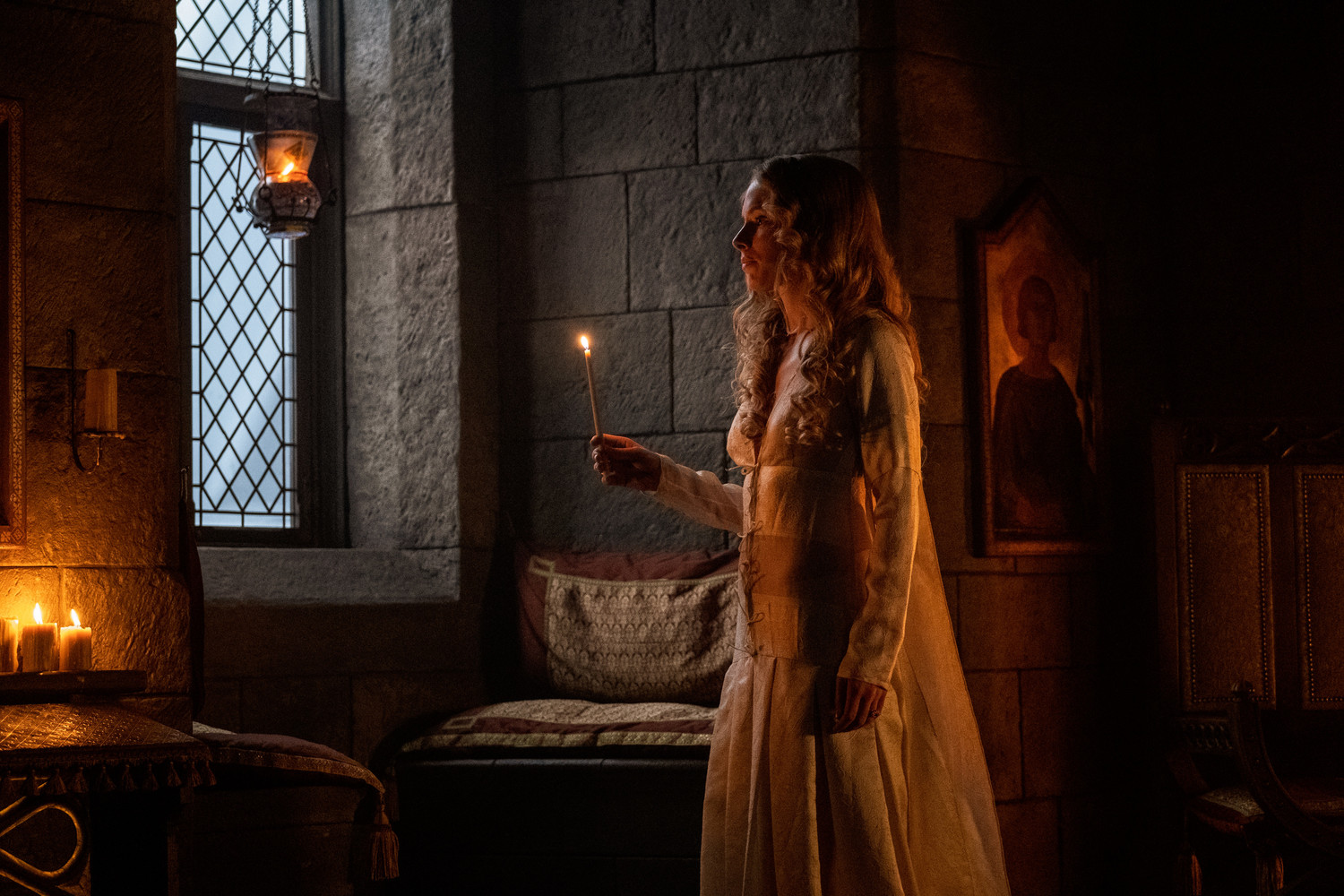 I mean, it’s pretty nifty footwork and fast thinking to get to the woman and cover her mouth, then tell the assembled masses that she’s distraught and out of sorts and that he’ll make sure the Templars pay for what they’ve done to her – all the while dragging her out of the room. But of course that wasn’t the weird part. That was to come when the prince gets all of it off his chest to the young woman who is now tied to a chair. The pressure he has felt as prince to produce and heir and to do his father’s will and to honor his mother has just ground him down.

How interesting that a woman whose child he has killed (in the name of all this) would be the conduit through which he finally gets to let it all spill out. Louis is on his knees crying into her dress, for goodness sake. Talk about “just let it out, baby. Just let it out.” I assume he kills her, of course, but the soul cleansing seems to have worked. He goes home to Margaret and enjoys her affections for what seems to be the first time in a long time. Well done, Louis. Let’s see if the bullets in the gun will hit their mark.

Why? Because it would seem that Isabella has some designs on perhaps making Margaret a naughty girl. She takes her sister-in-law out for some falconry action, then gets her a little buzzed on the local wine, and proceeds to wander off with not one of the guards, but two. Margaret, watching all of this naughty action, seems intrigued. Let’s face it, Isabella isn’t delighted at the prospect of going to England. She needs to unwind a bit herself. 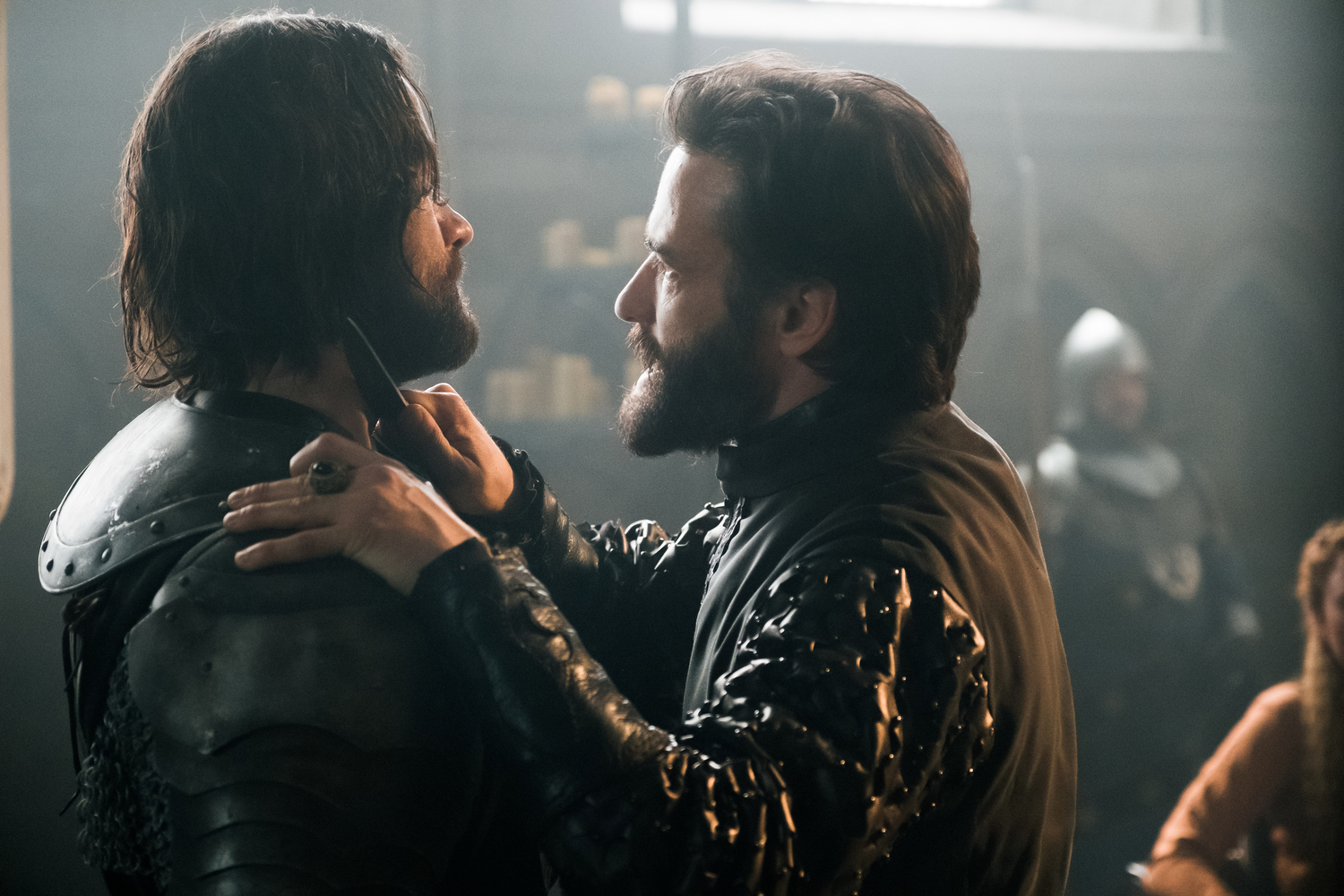 She and Margaret are talking while they ride and while Margaret admits that “until I produce an heir, I’m replaceable,” Isabella reminds her that she’s due to head to England “where my maternal destiny lies in the cod-piece of a sodomite.” That doesn’t sound like Isabella wants to go quietly into the English ‘good night.’ It’s obvious at this point that Isabella enjoys her “sport” with multiple competitors and that there’s some planning going on to perhaps reverse her father’s wishes. How Margaret plays into that, we shall see, particularly now that she and Louis have again found their “groove.”

It’s hard to get a read on Isabella. At times she seems to enjoy her sister-in-law, then there are moments she has this look that makes you wonder if it’s all a ruse. I’m curious to see where this all leads, to be honest.

Now, it would seem there is no more pretense. Talus and the Templars seem to know that the attacks on the Leper Knights signal that war with the King of France is nigh upon them. The battle at the leper temple was the first round in what should be quite the battle down the road. Now that King Philip and Gawain know where Landry is, and that he’s a Templar again, the focus of their search for him will narrow greatly. And that can only lead to one thing – bloodshed. Stay tuned, folks.