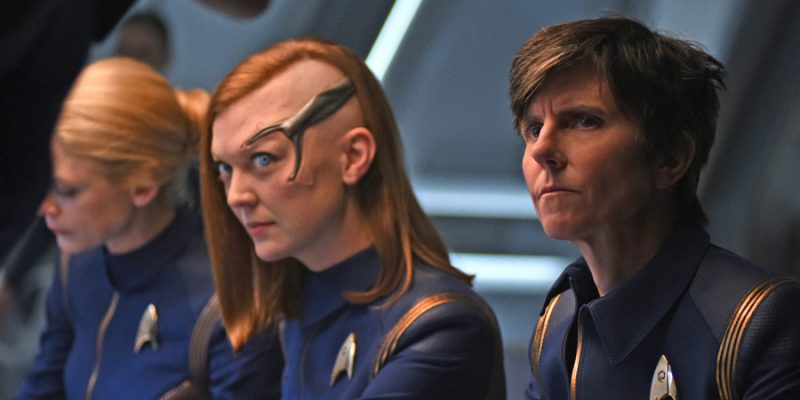 Captain Christopher Pike got a glimpse into his future, a future that fans of the Star Trek world have long known would befall him. The burns, the paralysis, the wheelchair, all of it was in full living color in Pike’s minds-eye during Ep. 212 of Star Trek: Discovery, “Through the Valley of Shadows.”

I have to admit that watching Pike get a full-on glimpse into his unpleasant future, and his ultimate decision to accept that future for the benefit of the battle against Control, was a bit of gut punch for me. In the end, the terror of seeing what’s in store for him simply wasn’t enough to have him depart from the mission at hand. The needs of the man outweighed the needs of the one – once again we see that scenario play out on the Star Trek stage.

I found much about Pike’s crisis – take the time crystal or not – to be poignant. It’s not many that get to stare their inevitable future in the face, a future that is ghastly, and given an “out” to possibly change that future, choose not to. We found out in that moment the Captain Pike is a worthy successor (or precursor) to Kirk, Sisco, Janeway and the others who will show their impressive colors in the Star Trek captain’s chair. I thought Ep. 212 was some of my favorite Anson Mount work as Pike. 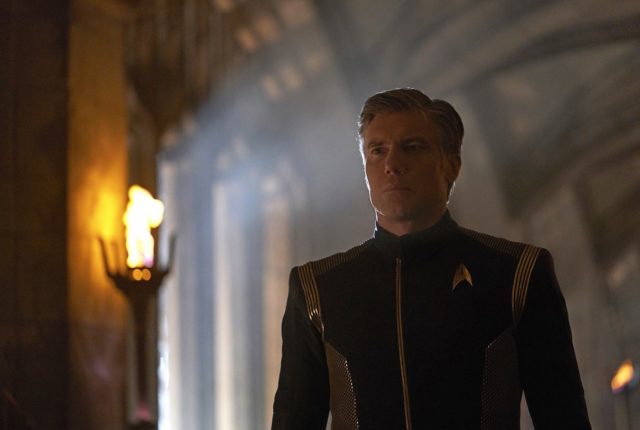 And as they have done several times, the Star Trek: Discovery creators, actors and writers did a nice job of fusing the new with the old. I appreciate their care with some of the things that will overlap with TOS and am grateful that they are providing us a little backstory for TOS. Some may quibble about particulars or find small flaws in the execution, but as always I’m more about how it makes me feel and am I entertained. And in regards to Pike’s glimpse into the future and his decision to let it ride to help stop Control, I was delighted with the whole story arc.

Of course, Pike was on the Klingon sacred planet of Boreth to get himself a time crystal. Seems the monks of this planet closely guard a secret – time crystals. The very thing the Discovery crew needs to try and get the time jumping red angel gambit back on track (interesting a red signal shown at Boreth. Who sent that?). The interesting sidelight of all of this is we get a reunion of L’Rell and Ash, as well as the realization that their child has been hidden on Boreth.

It all makes for some strange conversations, including a nice little verbal spat in Klingon, which I heartily enjoyed. Qapla! With L’Rell and Ash in positions where they can’t tip their hand (about the baby or Ash still being alive), Pike takes on the journey to the planet and an audience with the head monk. I thought it a fun little twist that time spent with the crystals creates a world of no future, past or present, just time. And in that swirling strange little world, Pike is introduced to a full-grown Klingon that happens to be….wait for it…L’Rell and Tyler’s son. 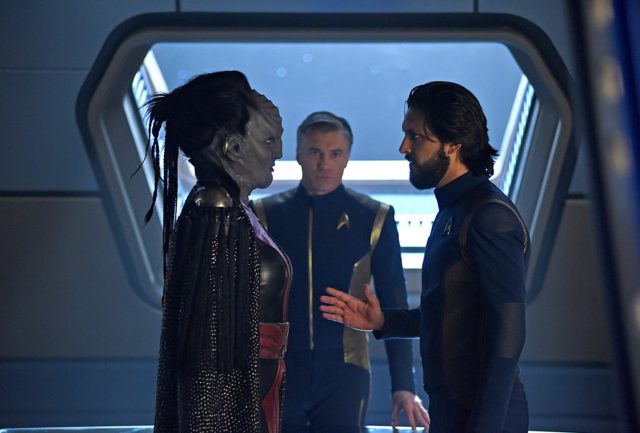 That’s right, the influence of the crystals has caused a rapid growth spurt. He’s no longer a baby. In fact, he’s the head monk and leads Pike on his quest for a crystal. A quest he will succeed at, but at quite the emotional personal cost.

While Pike spends quality time on Boreth, Burnham decides she’s going after Leland and the Section 31 ship. Spock has no intention of letting his “enraged” sister go alone, so the two track down the ship only to find bodies floating in space, one of whom is barely alive. It’s here we meet Kamron Grant, a former officer aboard the Shenzou.

Here’s the deal. Given Control’s penchant for predicting probability so well, I’d have been a little leery of this guy from the start, but who thinks that a guy dying in space is a threat? Turns out, Control not only killed all of those other crew members, but had infected Grant as well to bait a nice little trap back aboard the Section 31 ship. Honestly, as fearsome as Control is proving to be, it’s a pretty slick little AI. Just lured them in and just about shut the door.

Fortunately, a strange phrase caught Michael’s attention and suddenly we had Control and Burnham facing off while Spock, who had been conveniently lured away and locked in another part of the ship, worked to free himself. And what did we learn? Well, Control can get across a room in .8 seconds and break metacarpals. That was intimidatingly precise and horrible. We also learned that Burnham is the key to what’s going on. Control has essentially identified her as the wildcard in this seemingly stacked deck to destroy all sentient life in the galaxy. And it wants to convert her to its will. (Why must it be a needle through the eyes?). 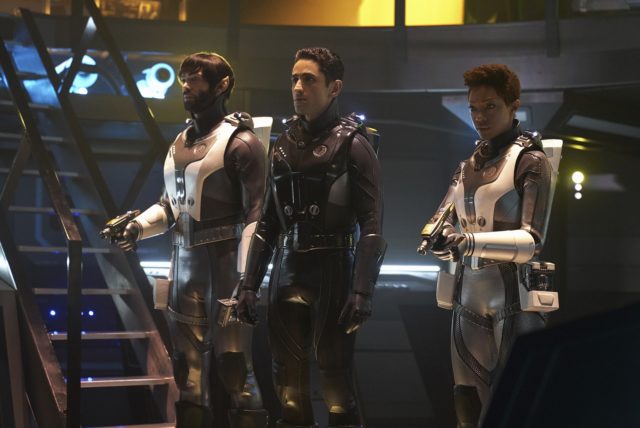 That’s what all this lead-up was about. Burnham has the best chance to have access to the rest of the sphere data as well, something Control obviously desires. It’s the “one ring” syndrome all over again. Fortunately, the quick-thinking Spock and resourceful Burnham combine efforts to ultimately put down this latest threat (the magnetized floor was genius – those metallic nano-thingies had no chance). well done, Spock. Gotta say, those nanite tentacles spilling out of Grant’s blasted body were…fearsome.

But the realization is now quite clear – Control is turning people and ships to its will and as we saw in the preview for next week, just about all of Section 31 is now on the Discovery’s trail. I keep reading about Control being the starting point for the Borg, which I find kind of fascinating. At first I was fairly certain that wouldn’t be the case as Control/Borg would certainly deal with this quadrant of the galaxy first and foremost.

However, should the Discovery someone find a way to not only defy time, but use the spore drive to send something, say Control, far, far away, that would neatly explain why the Borg were so far away and why they were moving toward this galaxy as they assimilated other cultures.

I know, there’s probably some holes in that theory, but as a quick and dirty theory, I could see how it would work. So, we’ll keep dialing into those little phrases that Leland and other Control-infected people use (Struggle is pointless vs. resistance is futile), as well as the nanite technology and quick bodily repair – all seems pretty Borg-like to me. I don’t know, perhaps we are witnessing the creation of the Borg. Keep looking for clues, folks. 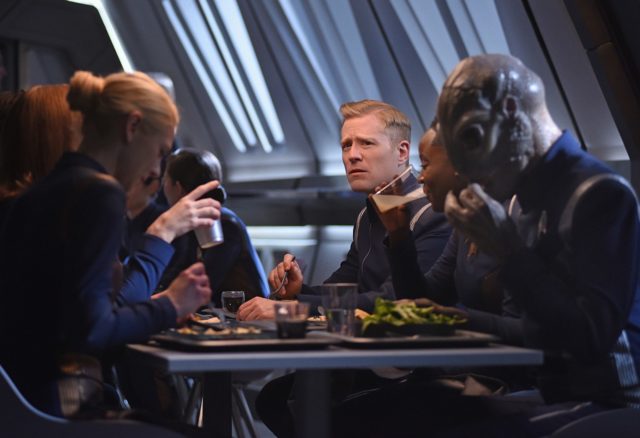 Once again I’m enjoying the re-animation of the Spock-Burnham relationship. The mutual respect grows, better understanding of each other develops and let’s face it, they make a pretty dynamic duo. I like watching them work, don’t you? Glad to see the siblings fighting the good fight together. And it looks like it’s going to be a very hard and difficult fight now that Control has tipped its hand a bit. Anyone or anything could be nanite infected, so whom to trust becomes a big question at the moment. So big, in fact, that it may come down to destroying the Discovery itself to keep Control from the rest of the sphere data.

That was where we were headed as the episode ended. I don’t see it happening, but that provides a clear picture of how dire the situation has become.

I thought it a great episode with plenty of emotion and tension wrapped around the story arcs. It also featured the return of two of my favorites in L’Rell and Jett Reno. We haven’t seen much of either of late, so I was glad to get a little re-acquainted with both. Reno is always fun when she arrives on the scene. So matter-of-fact, so no time for BS, and all with a delivery that makes me chuckle.

Her attempt to get Stamets and Culber on an even keel was sharp and on-point, but with that wonderful blend of humor that marks the character. Mary Chieffo and Tig Notaro do really fun things in this show in limited exposure.

Loved the cafeteria scene with everyone kind of ribbing each other. Yes, it’s a little subdued when Stamets views Culber sitting with others from across the room, but the ackwardness was the impetus for Reno to get involved. Just a fun, quality little scene that set the stage for bigger developments later on. Well done, all.