Love and devotion, vampire brutality, control, and congregation deceptions are all words that can describe this episode. Matthew and Diana step things up with their relationship, Sophie and Nathaniel make a difficult decision, and each faction of the congregation is maneuvering to gain the upper hand over the rest.

While Matthew is away in Oxford, Diana must recover from the trauma of spontaneously making witch water. Ysabeau and Marthe take care of her while at the same time Ysabeau tries to scare Diana away from Matthew. She takes Diana hunting and kills and eats a fox in front of her expecting her to be horrified. Ysabeau wants Diana to know that this is the nature of vampires, Diana is unaffected and unafraid. I love the way Ysabeau looks as though she’s ready to go out to lunch or to tea while munching on entrails. 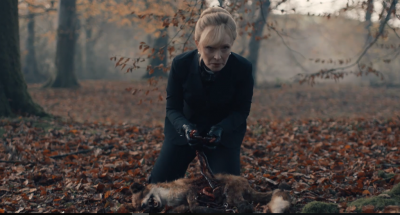 We get an interesting comparison when Matthew confronts Gillian, whose scent he smelled in the lab, about why she was there. She doesn’t answer him, so he decides to bite her. Apparently a vampire can see a person’s memories while they drink from them and he sees that she definitely was in the lab and took some pictures with her phone. Both Ysabeau and Matthew are brutal in what they do, neither will apologize in any way for the way they live and Diana will need to be aware of this and be able to look past it. 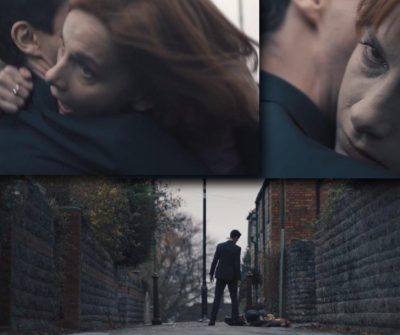 Ysabeau takes Diana into town to tell her about Matthew’s life before he became a vampire. He had been married and had a son. They both died of the fever that swept through the town. Matthew was devastated and fell or threw himself from the tower of the church he built. Ysabeau turned him into a vampire to save him. A key piece of information Diana learns is that in 1500 years, Matthew has never mated. Interestingly, when Matthew is in Oxford, Miriam tells him that he has mated with Diana; she knows the signs and believes that this is true. Matthew does not respond to her.

Matthew calls Diana to check in with her, he is missing her and wants to hear her voice, but when she asks him questions, he refuses to answer. Diana decides to end the call; she is disappointed and disillusioned by his behavior and the way he seems to be disconnected.

While he is in Oxford, Matthew takes the time to re-test Diana’s DNA. He wants to compare hers to pre 11th century witches. He finds unmistakable similarities that amaze him and he cannot stay away, he must rush back to her to tell her about it. When he arrives, she runs out and wants and needs him to tell her that he loves her. He tells her that this is a commitment that they cannot turn away from. This is that mating that Miriam was talking about. A vampire mating is forever, there is no divorce. It’s a romantic moment when they hold their hands up to each other, and he tells her “from this moment on, we will always be one”. Then he tells her he loves her and there is the all-important kiss, for them and for us, because we all love a happy romantic moment. 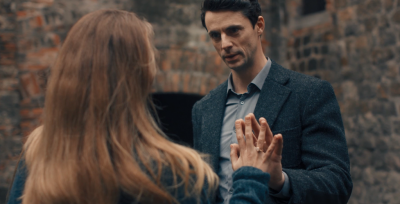 Ysabeau sees this and knows what has happened. From her expression we all expect her censure. But instead Diana and Matthew get her support. It’s a great moment when she tells them, “You are my beloved son, and now you are my beloved daughter. Your fight is now my fight.” She also addresses Diana’s issues with her power, “If you have the courage to love my son, you have no need to fear your power. The women in the deClermont family defend themselves, and you will be no different.” Let’s hope that Diana lives up to the courageous iron-willed women of Matthew’s family!

The results of her DNA testing are incredible. Diana has every genetic marker they have ever seen in a witch. This explains why others keep sensing that she is a very powerful witch despite the fact that she appears to have very few powers and no control over them.

While Matthew was in England he had to spend some time with Hamish. What a great friend he is to Matthew. Everyone needs a Hamish in their lives; someone who will tell you the truth and who will also help in any way possible without question. Here is where Matthew admits that he loves Diana. He tells Hamish that he is afraid to tell Diana about his life, Hamish’s response is fantastic. “I know about it, and I still love you.” Hamish continues to provide Matthew with his wisdom. “There are many things one can control in this life. Love is not one of them. If you love her, don’t let anything get in your way.” a lesson that we should all heed.

Once again the daemons keep things interesting. Nathaniel and Sophie have a very interesting conversation. Sophie has had a dream in which her father tells her that she has to tell the truth. She must tell Agatha what she is. Nathaniel is afraid of this, despite the fact that she is his mother; he does not want Sophie to tell her anything because she is on the congregation. But Sophie is adamant, she cannot pass the statue on without Agatha and “the witch needs it”. It will be fun to see how this all comes together.

On the other end of the spectrum, the members of the congregation are maneuvering around and against each other. There is so much deception and trickery. 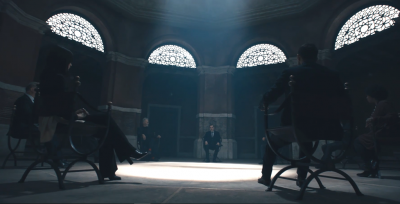 Through Gillian’s snooping, Knox learns that Matthew is studying witch DNA. Instead of trying to understand what and why, he assumes that Matthew has a hostile reason for what he is doing.

Knox pontificates and demands that Diana be removed from Matthew’s clutches. He makes is seem as though she has been kidnapped and is there against her will. He blames Gillian’s attack on Matthew and uses it as further evidence. Baldwin (who consistently tells it how it is and messes up Knox’s arguments), reminds them all that she had been trespassing on vampire territory.

Gerbert offers his services to retrieve the witch, sure, who believes that he is offering this out of the goodness of his heart? Baldwin intervenes and tells them that it is his property; he will be the one to get her.

Knox and Satu are up to their usual tricks and discuss whether they can “look inside” Diana to see her powers, but an “opening spell” is very dangerous. Satu then wonders if they should work with the vampires, but Knox tells her that they are snakes and can’t be trusted. If anyone can recognize a snake, it is Peter Knox. Despite his warnings, Satu goes to see Gerbert right after the head of the witch he has enthralled tells him that there are two witches, one light and one dark, and one is close. If Diana is the light witch, odds are Satu is the dark one. Satu is taking a big risk. 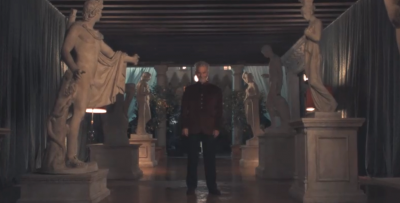 Back in France at Sept Tours, Diana is expecting to be consummating their mating when Matthew begins to ask her if she knows what bundling is. He then tries to avoid getting undressed telling her that she won’t like what she sees. She removes his shirt and sees all the scars he has collected over his 1500 years. “Think of them as a map of my life”. That is a long life of some very brutal living. It seems as though things will be moving along between them, but Matthew stops, and settles them in bed to sleep instead. Oh well, it was a sweet moment.

Diana wakes up early and is clearly very happy. Her need to do something that is part of her normal routine takes over and she decides to go out for a run. This is disastrous. Someone, flies over her and snatches her up and flies away with her. We don’t see who it is, but I’m pretty sure it’s Satu. This is where it ends! 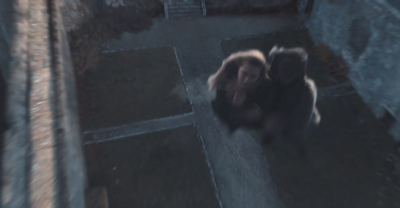 Thank goodness we only have to wait a week after that cliffhanger! We will all have to tune in next week on Sunday at 8 central on AMC or BBC America to find out where she is being taken, what happens to her, and how Matthew reacts.