During episode 6, the drama, romance, and intrigue continue. There is family drama, drama between the creatures, and drama among the creatures.

It starts with Satu (as we suspected) flying over the French countryside with a terrified Diana. She gets to the ruins of a castle and flies down to a courtyard, but instead of landing with Diana, she drops her. This is the beginning of her vicious torture which is what she thinks she must do to learn Diana’s secrets. Diana continues to tell her that she has no secrets. At least that’s what she thinks, but she never knew she had them. She has lived her life feeling as though she had no magic and fearing it. I don’t think she has ever known why she feared it, but it has been the way she has lived. Satu magically lifts her in the air and throws her to the ground over and over, then finally holds her in the air upside down within a circle of fire and begins to use her magic to open Diana up to see her magic and learn her secrets. It is horrible and cruel. By the end they are both unconscious on the ground. 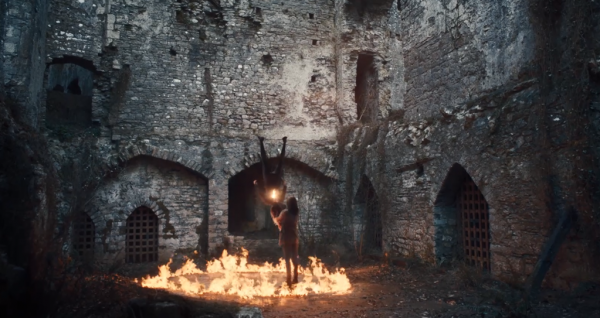 When Satu wakes up she drags Diana by the leg and throws her down into a hole. In the book it is an oubliette, I don’t remember it being referred to this way in the show, but it’s definitely an oubliette. This is some serious drama between the witches and feels so disloyal, they should be supporting and helping each other. It’s a shame that snakes like Knox can influence other witches so completely.

I missed the ghosts that kept her company in the book. But the appearance of her parents was beautifully done. The story is very important. It is one of the stories about the dark prince that her parents told her when she was a child.

Diana was locked in a dark room all alone. A witch trapped her inside; she wondered how she would ever get out. But then she heard a knocking at the door, it was the prince. He used all of his strength to open the locked door, but he still couldn’t get to her. Diana spied a hole in the roof just big enough for her to squeeze through, so she called up to him, “fly down and lift me out”, but the prince couldn’t fly. So Diana had to help herself. 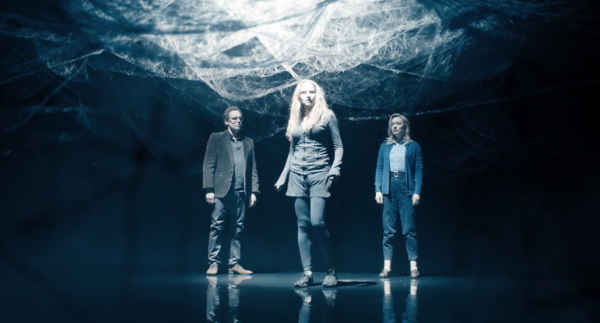 Throughout this episode there are visions, flashbacks, or memories of events that have gotten her to this moment, of her powers appearing, and of her love with Matthew. All of this helps her understand what has occurred and how she must survive.

While this is happening, Matthew is comfortably sleeping not knowing that Diana is not beside him, Gerbert is inside the castle waiting his turn to “examine” Diana, and Baldwin is in his helicopter flying to Sept Tours to “bring the witch back to the congregation”.

Gerbert is horribly creepy in his room in the castle ruins with his witch head in a box, planning who knows what kind of sadistic torment for Diana. When Gerbert finds out that Satu has thrown Diana down into the hole, he tells Satu to bring her up. Satu used up her magic trying to learn about Diana’s secrets so she cannot fly down to bring her to Gerbert. He demands that she tell him everything she learned. Finally Satu is loyal to her kind and tells him that she won’t tell him anything she learned. Although I don’t think she learned much if anything. 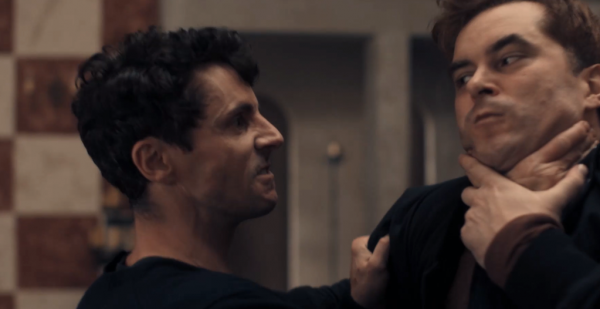 When Matthew wakes up and realizes that Diana is not there, he instantly knows that something is very wrong. Baldwin is there when he gets downstairs and Matthew attacks him asking him what the congregation has done with her, more family drama and drama between the vampires. Ysabeau is there watching them, completely unaffected by the violence between them. She is such a cool cookie. At this point, Marthe comes running in telling them that Diana was taken from the garden. They realize that it must have been a witch who took her, a serious violation, as witches should not ever enter into a vampire’s territory without invitation. Baldwin, Ysabeau, Marthe, and Matthew sit down and strategize how they will find her.

Back in New York, Emily has been scrying and saw something very upsetting. Sarah and Emily decide to call Matthew to find out what is happening with Diana. When they find out that she was taken and by a witch they are not happy. In Emily’s vision Diana is in a castle, or what used to be a castle, in the dark, and there are two figures with her. This confirms Matthew, Baldwin, Ysabeau, and Marthe’s suspicion that Gerbert has her. They use Baldwin’s handy dandy helicopter to fly to rescue Diana. 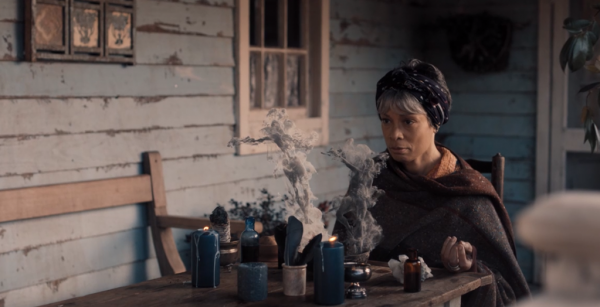 When Gerbert hears the helicopter, he escapes like the coward he is after he locks Satu in the room with the head that keeps telling him to “beware the witch with the blood of the lion and the wolf”. Satu talks to her and borrows a bit of her magic to escape and takes the box with her. Once she is somewhere safe, she talks to the head and asks her who she is. Her name is Meridiana, Satu seems to know who she was and is in tears. Meridiana begs her to help her and to release her. Satu helps her escape her prison so she can finally be at peace. As much as I hate Satu, she did two things that give her a little bit of redemption. First she didn’t tell Gerbert anything about Diana, and second she helped Meridiana.

At the same time, Baldwin and Matthew are at the castle and find Diana. Getting her out is not going to be easy, until she hears her mother telling her that “it’s time, remember the story, fly”. She tries, but it doesn’t work until she remembers Sarah telling her that “magic is in the heart”. Thinking about Matthew and her love for him she is able to fly to him. They take her to the helicopter and back to Sept Tours, where Ysabeau and Marthe are there ready to help Diana in any way possible.

We get a hint of what Meridiana might mean when Matthew is looking Diana over to clean her up, and tells her “you’ve shown such strength, ma lionne.” This is before he helps her look at her back. Ysabeau and Marthe are shocked because Matthew’s insignia has been burned into her skin. She has been branded. It’s horrible, but I can’t also help thinking that if she had to be branded, at least it was with the insignia of the man she loves. 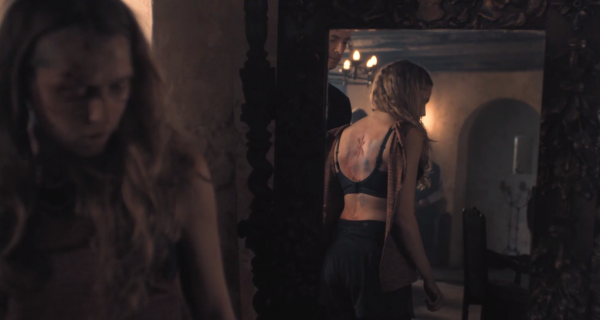 They have some very sweet and tender moments together until they discuss what happened to Gillian. Matthew tells her that he did not kill her, but that he won’t make that mistake again. He unapologetically tells her that he will hunt down anyone who tries to harm her. Diana’s lioness shows again when she asks Matthew to save Satu for her, she “wants to deal with her myself”.

The conflict between Baldwin and Matthew continues when Baldwin announces that he will be taking “the witch” back to Venice with him. He tells Matthew that, as the head of the family, he will disown him if he fights him on this. Matthew calmly looks at Baldwin and invokes the Knights of Lazarus who must protect Diana. He then tells Baldwin, “Baldwin deClermont, I call upon you to fulfill your sworn oath and enter the battlefield where you will obey my command till I release you.” Baldwin’s attitude immediately changes, the Knights of Lazarus are above the family and he has no choice but to obey. I love the formality and tradition of it all.

While all this is happening, back in Oxford one of my very favorite characters is confronting one of her fears. Sophie and Nathaniel are talking with Agatha. Sophie proceeds to tell Agatha that she was born of witches. Agatha is taken aback, “then you’re a witch?” No, Sophie is not a witch, she is a daemon but she is pretty sure that her baby is a witch. This is why daemons need to communicate with each other and why all creatures should also be allowed to talk. I’m pretty sure that Matthew will want to know about this for his research since he is working to understand what is happening to all creatures. The Book of Life is also important here, as it appears as though it will provide information about all the creatures. Agatha seems to be a bit hurt that Nathaniel and Sophie didn’t tell her about Sophie’s family. But I understand how he didn’t; it could be difficult for her since she is on the congregation. But Agatha comes through as I expected she would, she tells them that her loyalty and love are to them. She doesn’t want to tell them about Diana, but Sophie is convinced that she is important to her and to her baby.

The episode ends with a disturbing revelation to Diana. Ysabeau, Marthe and Matthew tell her that they believe that she was spellbound. This is a disturbing turn of events, since the only witches who were spellbound were mad and hurt people. Diana looks at herself in the mirror and asks, “What am I?” 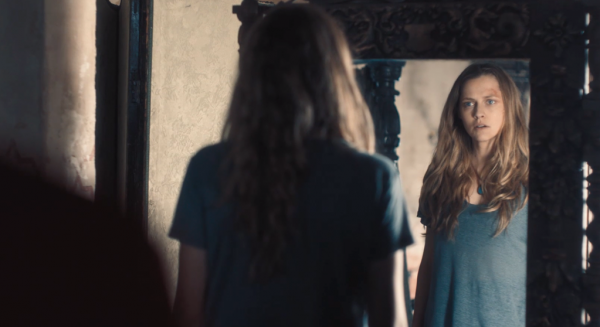 Poor Diana, it seems that there is a lot about her life and her identity that was kept from her. Hopefully next week we will find out more about what she is, why she was spellbound, and what they will do about it. Diana really needs her magic if she and Matthew are going to escape the congregation, she must be able to defend herself.