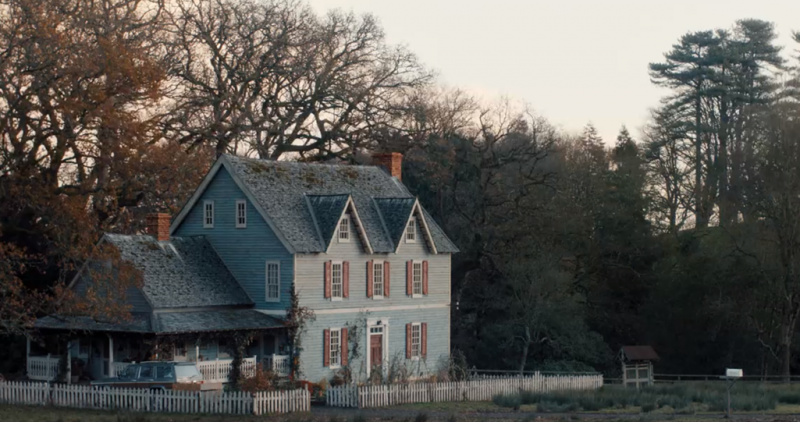 Diana is in danger, the congregation is after her, she needs to understand why she was spellbound, and she must learn how to control her powers. At the end of episode 6, Diana had been rescued from Satu and Matthew told Baldwin that he was invoking the Knights of Lazarus, requiring him to help keep Diana safe.

Diana and Matthew are leaving Sept Tours to go to Madison. The goodbye scene is touching, Ysabeau is very supportive and loving, she offers to help in whatever way is needed. Baldwin’s main effort right now is to hold off the congregation as long as possible. 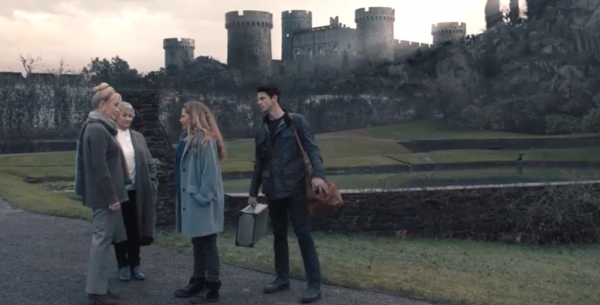 There are a few characters in the books that I have been looking forward to experiencing in the show, and the house in Madison is one of them. I love the way the house has a personality, decides who is welcome, and is able to predict when others might be arriving. The ghosts and the items that are hidden in the house are fun to anticipate.

When Matthew and Diana arrive, Sarah and Emily were out of the house so that they could have some time alone with it. The house misbehaves and needs to get used to Matthew. He asks Diana what happens, and she tells him that the doors slam, the lights flicker, and once the entire second floor disappeared for a week.

When the aunts get home, Diana confronts them, asking if they knew she was spellbound. Sarah is surprised, but Emily says she had a feeling that she had been spellbound, and that it was her parents who did it. Emily tells them that Rebecca and Stephen didn’t want Knox to know what powers she had and they did it to protect her. They moved to Madison to avoid Knox. 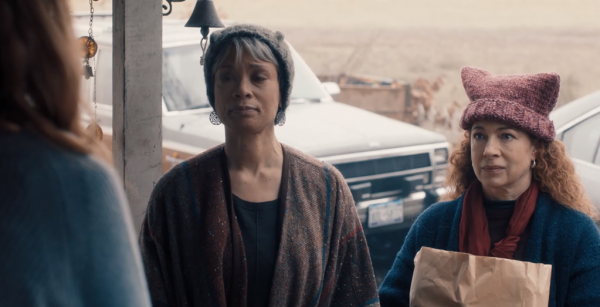 The house begins to show them what happened when they spellbound her. The image of Rebecca and Stephen in the kitchen appears, they are surprised because the house has slammed and locked all the doors and windows. They realize that Knox has found them and that they are out of time.

Then they are shown up in Diana’s bedroom. She is in bed and they prepare to spellbind her. While Stephen does the spell, Rebecca tells her the story of the magic ribbons and the shadowed prince.

“A brave young witch is covered in invisible ribbons in all the colors of the rainbow. The ribbons that wrapped around the witch were special ribbons; the ribbons would protect the girl from witches who were jealous of her powers. Then one day when she was all grown up, she met the shadowed prince.” 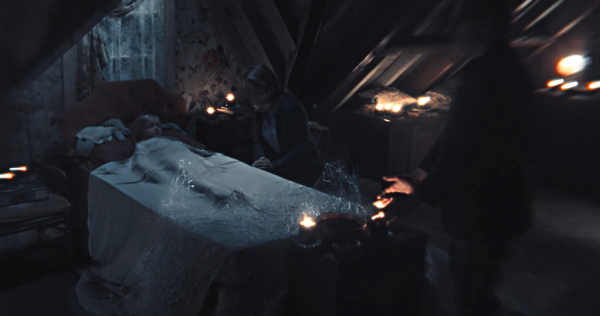 When they finish the spell, Rebecca looks at Stephen and asks him, ‘What have we done?’ He tells her, ‘She’s safe, she’s alive, one day if she really needs it, she’ll find it again.’

Next we see that Knox is there to test Diana’s powers by putting his hand on her forehead to read her powers. Later, Stephen and Rebecca are leaving on a trip; Sarah and Emily are there to watch Diana while her parents are away. They are leaving to keep Knox away from Diana. They seem upset and anxious.

After all of this Diana runs into the woods. Matthew follows and finds her and reiterates that there is nothing wrong with her, and there never was. Diana’s magic is bound to need, if she needs it, she can call upon it. The exciting part here is that it is also somehow bound to Matthew and her need and love for him.

Sarah will be helping Diana get some control over her magic, and Matthew will be teaching her to defend herself. Its nonstop conflict between Sarah and Diana, Sarah is not calm enough and plain spells are not tied to need, so it is an exercise in frustration for them.

While they are working, Matthew and Emily chat. He walks in with a box, he’s sure it was from the 17th century but it looks brand new. Em says that it was a gift from Stephen. Matthew realizes that Stephen was a timewalker. He asks her how it works. She tells him that it’s easy to hop a few minutes back and forth, travelling further though; they need 3 objects from the right time.

Diana gets very frustrated and angry and flashes away and finds herself out in the barn. Matthew runs out to her. She says she needed air and suddenly there she was. He tells her that he thinks that she timewalked and also that her father was a timewalker.

Matthew and Diana spend a lot of time out in the woods where he is helping her come to terms with her powers, she finds herself thinking too much. Her powers are connected to need and instinct. She decides to tempt Matthew’s vampire side by running away from him. He can’t help himself, he has to chase her, when he’s about to catch her, she flies; it’s such a turning point for her. When she comes down she tackles him, the sexual tension is off the charts. They end up in bed. After a bit, he tells her that there were two human women, he loved them, he told them they were safe with him, and he’s afraid he will hurt her too. Her response is awesome, she reminds him that she is not human and she is powerful and she won’t let him hurt her. I love how strong and empowered she is now. 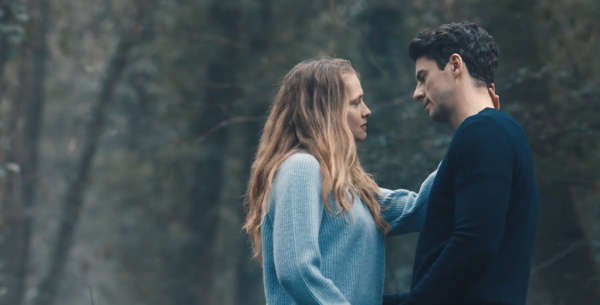 Miriam and Marcus were bound to show up at some time, and when they do, Sarah behaves true to her character and is difficult and hostile towards them. They all sit in the living room to discuss their next steps and Marcus is staring at Sarah, she nastily asks him what his problem is. His response is one of those awesome vampire comments that come from having such a long life. She looks just like her namesake and apparently she taught him to set a broken leg during the Battle of Bunker Hill. This is a moment where they could connect, but Sarah will have nothing to do with it. Her anger and hostility seem to upset the house, it rattles and shakes and suddenly an envelope shoots out of the wall. It is addressed to Diana, and there is a note on the back it says, “Diana – You will need this. – Dad.”

Inside is one of the three missing pages from Ashmole 782. As they are all looking at the image Miriam comments that the woman in the picture is wearing Matthew’s insignia. I know that Sarah is supposed to be suspicious, but I continue to be frustrated by how obnoxious and rudely hostile she continues to be.

While Diana and Matthew are in Madison working on Diana’s powers, the rest of the congregation members are working on their own agendas.

Knox is seen in his bed tossing and turning, he wakes up to find Satu sitting in his room staring at him. She confronts him about killing Rebecca and Stephen. For a minute I thought that maybe she would be supportive of other witches, but no, that doesn’t happen. He tells her that he thought Rebecca could have lead the congregation, and together they could beat the deClermonts, but Stephen was secretive and selfish, when he got to Rebecca, their great hope was gone. As if Rebecca couldn’t think for herself or make a decision on her own? Knox is a jealous monster.

Satu tells him that there is a prophesy about the end of the vampires. She thinks it has to do with Diana. Knox says that they must get her away from Matthew, whatever the cost. This is very ominous.

Later Satu is walking through Venice and she comes across Domenico. She has no magic and he realizes this very quickly. He tells her, “Venice is no place for a witch with no magic.” He goes to Baldwin and lets him know he has Satu. Baldwin thanks him because he wants to punish her for trespassing on his family land. Domenico is sly here and won’t give her to Baldwin, he wants to keep her to use as leverage when he needs it. I want to feel sorry for her, but I can’t.

Domenico is still working on convincing Juliette to go after Matthew. He tells her that he will get Diana’s file so that she will know more about her powers and her weaknesses. She is so unstable that this is very dangerous for Diana and Matthew.

Agatha goes to see Hamish in his office in London. I love the view from his office of the London financial district, the buildings are so interesting. It is smart of her to speak with Hamish knowing of his friendship with Matthew, I’m sure she’s hoping he will tell her where she can find him and Diana. She explains to him that Sophie was born of witches, and that she thinks Diana is the savior of the daemons. If cross species families are possible, daemons might finally have the status and understanding they deserve.  This theory is actually one that should be helpful to all the creatures since they are all struggling.

The episode ends with a cliffhanger that prepares us for the season finale next week. Diana and Matthew are in the woods again working on her senses. She is walking with her eyes closed “looking” for him. As she is walking, she says “I sense a vampiric presence” and then proceeds to walk right past him into the barn. There is a vampire in the barn, the wrong one though, it’s Juliette. Juliette grabs Diana by the neck and says “You must be Diana”. The episode ends there.

As a book reader, I know how much still needs to be covered in just one episode. So far this adaptation has covered all the important points, so I will continue trusting that it will continue till the end.