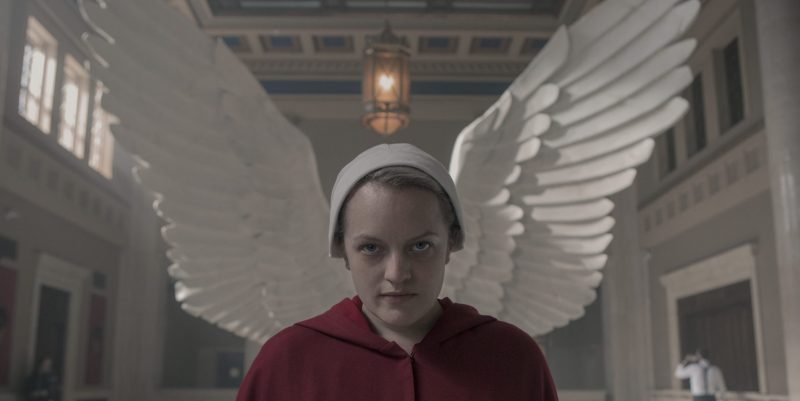 I made the mistake of watching this episode of Handmaid’s Tale right before I went to bed, a couple of weeks ago (yes, reviewers get them early. It’s not always a good thing.). For me, this has been the most intense, and the most disturbing, episode of the entire series. And while the Handmaid’s Tale Facebook group that I co-admin is a non-political group, the current political climate in the US is part of the detail that feeds into my anxiety about this episode (a link to that group will be at the end of this review).

My assessment of this season as “Resistance” hasn’t changed. June is harder, more ready to challenge, less likely to be silent. She’s freer with her opinions when talking to Serena – perhaps not a smart move. And now, she’s confronted with an amped-up Gilead, one where women’s voices – and hers if she’s not careful – are LITERALLY silenced. The realization shakes her all the way down, and instead of making her think, “I need to keep my head down, I need to survive,” I really hope that this turns her even further toward protest and destruction, rather than servility and compliance.

She’s not the only one who was shaken by that first image of the Handmaid at the Winslowe’s home – I could handle it when we saw all those women with a cover over their mouths, but what it was hiding was horrific. What does this say about the view that the men of Gilead have toward the Handmaids – and toward women in general? Because it wasn’t only Handmaids – Marthas out in public had their mouths covered as well, although it doesn’t look like they had the rings through their lips; and the wives even had their faces covered by the light veil. Women are certainly not made to be heard. They’re barely made to be seen, except when the men want to see them, and in settings of male choosing. I’m waiting for the next level of Gilead to be Matrix-like – women hooked up to life support tubes, gestating away, nothing else allowed. Except for sex slaves. Men have to have their fun, don’t they!! 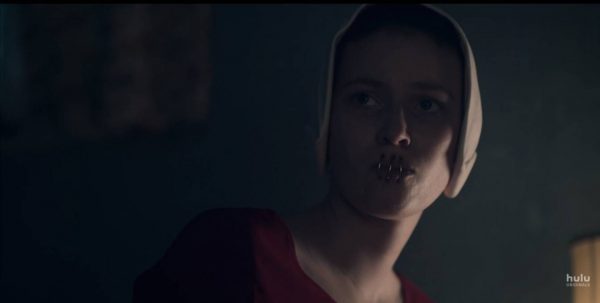 Everything in Gilead is ordered, methodical, pared down to its essentials. Colors, clothing, architecture – no accents, no frills. The cinematography of this episode demonstrated that beautifully – overhead shots of the umbrellas, and the checkerboard floors were designed to show the total consumption of free will into this society. 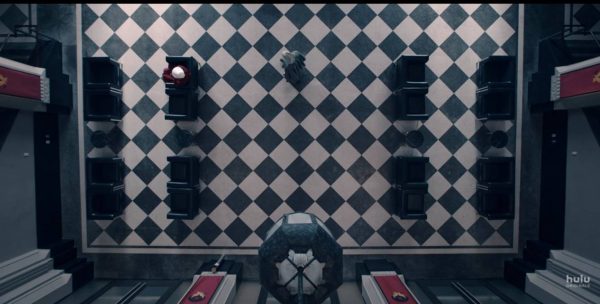 Black is the most prominent color, other colors used only to indicate rank or status, especially for those who are given no other way to learn of that status – primarly women, who are not allowed to read. What is the most basic way to tell these less-than-people who you are – give them an unmistakable visual clue. Keep group members together. Keep groups apart. Upper status on one escalator, Handmaids and Marthas on another.

Symbolism was completely pushed to the max in this version of Gilead’s Washington (and I’m surprised they didn’t change the name). From the the broken-in-half Lincoln (he freed the slaves, but Gilead has created a whole new slave class) to the cross created from the Washington Monument, to the Handmaids kneeling in obesiance on the Washington Mall, Gilead is big on the visual.

As June is pushed farther than she ever has been, so are our other characters. How far now will they go to maintain, or destroy, this way of life? How far will they go to further their careers? Serena has decided to push for Nicole’s return, and gives over any thoughts she had of letting Nicole have a free life. “Seeing her changed everything for me,” she tells June. “Seeing her changed you, but it didn’t change this – place,” June fires back. And later, Serena tells June that she was only able to let Nicole go because she thought June was going with her – that her MOTHER was with her – but when June didn’t go, that negated any ability Serena had to live with her decision.

And that one line – “I should have put a ring in your mouth when we first met” – chills! That means that this isn’t a surprise to Serena, just that the little ol’ Boston backwater hasn’t decided to go full Gilead yet – but they could! “Do you want us all to be silenced?” a tearful and afraid June asks Aunt Lydia. “No, no I don’t,” she replies – she had seemed almost as surprised and shocked as June had been, when she approached a Handmaid and pulled down the cloth covering her mouth. Had Lydia known about this, but had never seen it? Who made the decision for the Boston district?

Perhaps the Handmaids in Washington had at one point been too rebellious, too talkative, or was this a preventive measure? In any case, this is the literal representation of what we’re starting to see happening in our own country’s government – all-male panels deciding on women’s health matters, more frequent displays of anti-female violence with fewer consequences. While we haven’t yet had a need for Handmaids to bolster sagging birth numbers, the value of women in general is in peril. (Opinions are strictly my own, and I am not inviting debate on this subject.)

Fred is faced with the prospect of a boost to his career – how much of his push to get Nicole back is motivated by wanting to make a splash for himself, and how much is a true wish for her return? The scenes of him playing with the the Winslowe’s six or seven children (how many Handmaids have they had? How many of these are stolen children?) were cute, and certainly helped Serena to see him in a positive paternal light. But to be in the center of command, in favor with the Supreme Commander, this has to be a major draw for Fred’s ambitions. The draw for Serena is obvious, once you see her delight in the Winslowe’s large family – could she, too, reap this benefit? “It’s the only thing she ever wanted,” Rita tells June. 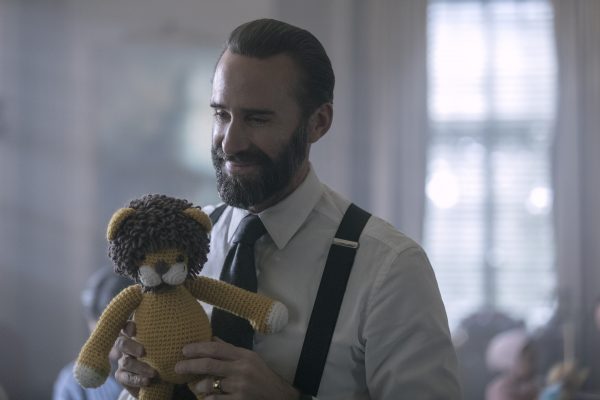 The Handmaid’s Tale — “Household” – Episode 306 — June accompanies the Waterfords to Washington D.C., where a powerful family offers a glimpse of the future of Gilead. June makes an important connection as she attempts to protect Nichole. Fred (Joseph Fiennes), shown. (Photo by: Jasper Savage/Hulu)

But there’s something not quite square and straight about Winslowe, don’t you think? That lingering touch, the hand left too long on Fred’s shoulder gave him pause to think – Fred may be creepy himself, but he certainly is a keen observer of feelings and messages, said and unsaid. And should our slightly off-kilter suspicions come true, that Winslowe may not be the straight arrow, pun intended, that he seems to be, how far will Fred go to stay in Winslowe’s good graces, and possibly have something to hold over the Commander’s head? 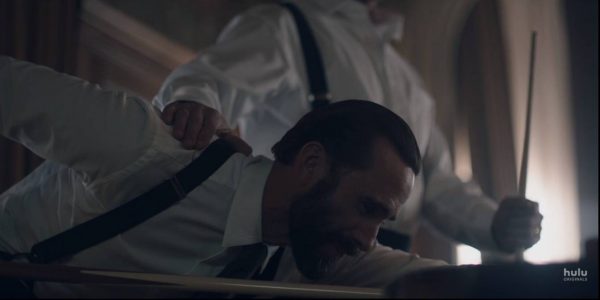 Last, Nick. Oh, Nick, our down-on-his-luck, fell unaware into the Gilead trap Nick – not everything is as it seems there. That he’s hidden his background from June all this time doesn’t bode well. When the Swiss representative tells June that “some people are not to be dealt with,” and that “Mr. Blaine is not to be trusted,” it breaks her heart – and confirms some little niggling suspicions. After all, how did Nick know how to get in touch with the Resistance to get Nicole out? How has he evaded punishment for his affair with June? It hasn’t been a huge secret – they were even able to touch hands, briefly, as Fred set up his video shots. Who is Nick? Serena says, “He was a soldier in the Crusade. We wouldn’t be here without him.” does she mean – Gilead wouldn’t have gotten this far? Or the Waterfords personally owe him a debt? And, maybe, could he be a double agent? The scene of Nick walking through the train car, soldiers saluting him, was a bit chilling! And it gives nuance to his line, a couple of episodes ago, when June commented on his being made a Commander, “It was my due.”

This episode certainly changed the way I’m seeing Gilead – we now have a larger view of the takeover as a whole. Even the Swiss tell June, “Gilead is extremely powerful” – not just an upstart rebellion, but a force to be reckoned with, world wide. And we need to see more of its takedown and destruction. Go, June!

Chat about the show in our non-political Facebook group, The Handmaid’s Tale on Hulu – Gilead Online