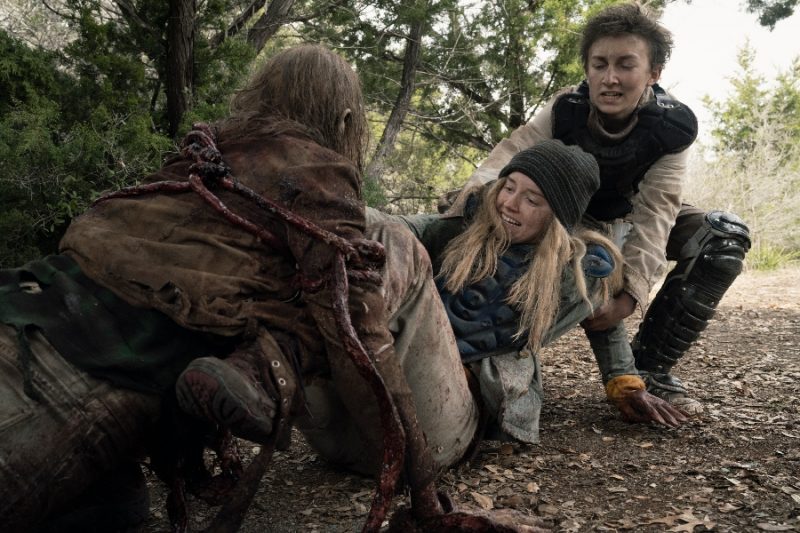 Review l Fear The Walking Dead 5.4 l The Kids are All Right

The kids are all right. All_of_them! Yes, all. It’s a Camper Kid Village! Surprised?

I knew the Camper Kids trio couldn’t manage that perimeter alone.  If you didn’t love these kids before, surely you do now that you know this little village is committed to protecting their parents, their zombie parents. As Margaret Mead said, “Never doubt that a small group of thoughtful, committed citizens can change the world; indeed, it’s the only thing that ever has.”

What I didn’t know? Daniel is a Blues fan. Loved his “Death Letter Blues” by Son House listening experiences with Skidmark and Charlie. I bet he’s a Michael Kiwanuka fan, too. Here’s more I loved, other thoughts and some #FTWD good news… 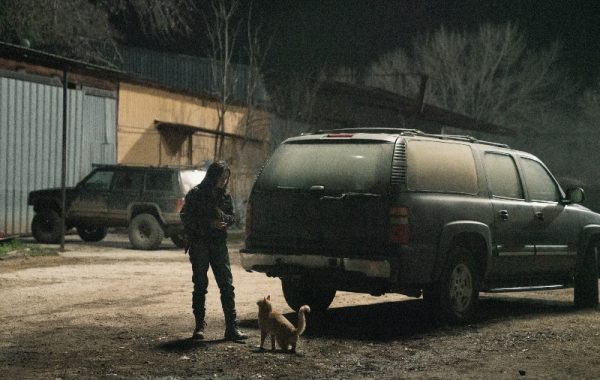 Connector Dylan came through for the Camper Kids. With all their parents gone, they need our group of adults to help them move on. Really, they all need each other.

Quiet, wise Daniel made everyone feel better. Charlie did need to hear him say, “Every day brings a chance to start over, a chance to get it right.”  He’s so sentimental, leading the herd away, hanging on to that cigar and leaving the record player for Charlie. No, Daniel did not leave that night on a plane but he’s on a mission. May you manage to stay alive, my friend, wherever you’re headed. 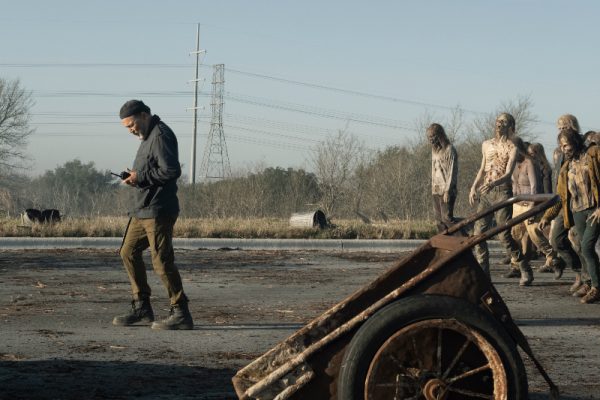 Also loved that even though we didn’t get Al back, we did see her in the Episode 5 preview. Hope it wasn’t some sneaky flashback scheme and we really do get her back.

Hmm. Just had a thought. Could she have been in that helicopter, headed to meet Rick? If it couldn’t be Madison being rescued, or doing the rescuing, I’ll take Al for sure!

The twins comedy act cracks me up. Sarah gave me all the happy feels in this episode. Her response to Strand’s “Where’s the six pack?” was perfection!

“Brewski or abdominal? ‘Cause you ain’t gonna find neither here.”

Sarah pulled up that stool and dared Strand to give up. She’s a straight shooter, just like Dorie, and she’s a poet and knows it.

“Dan the Man’s not here right now and, until he is,
we’re gonna keep crankin’ to get this bear in the air.” 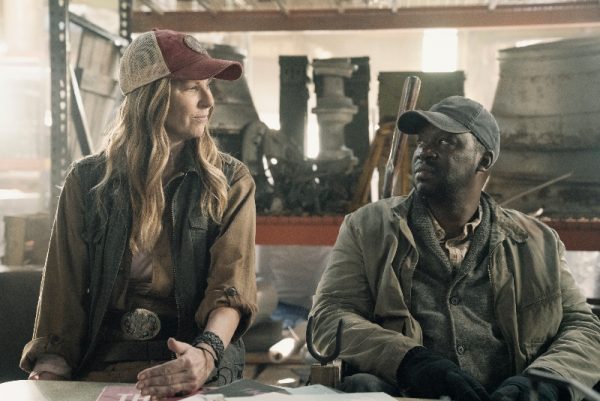 Everybody needs a Sarah in their life? Do you have one of your own?

When Sarah comes in hot and yells, “Hug the van, Dan.” to Daniel, why didn’t he just run around or roll under to the other side and jump in with Wendell and Sarah or with Strand? Sometimes it’s a tad hard to suspend belief.

I’d say I love a good mass walker clearance as much as anyone. Using the plane propellers was a stroke of Strand ingenuity. So, why does this scene get a Really?! They had the engines *conveniently* die as that last walker went down. I like predicable at times but that was too neat of a perfect-bow-on-top moment for me. 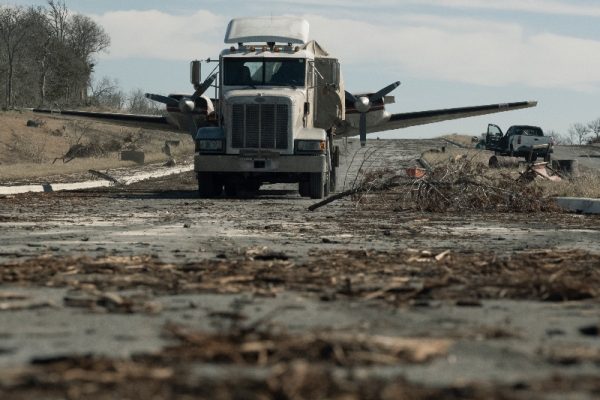 So many good reactions to choose from this week. Thank you to everyone who enhanced my viewing pleasure!

@writtenbysara reminds us of the ties between FTWD and TWD. Love the cross-overs and callbacks!o 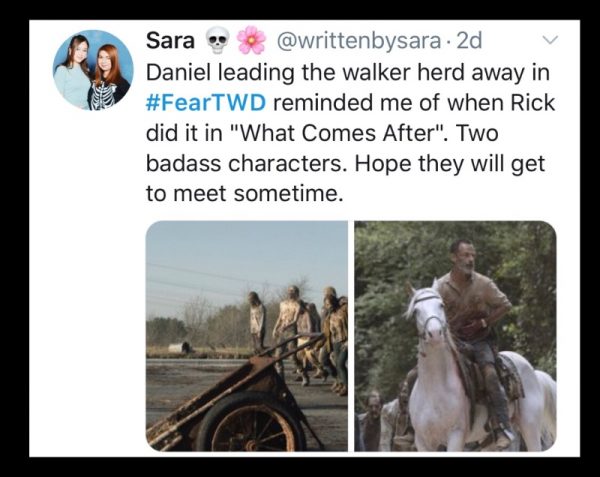 @TWalkingDWorld takes the cross-over one step further, to Morgan in the films. Who else from FTWD would you like to see in the TWD films?F 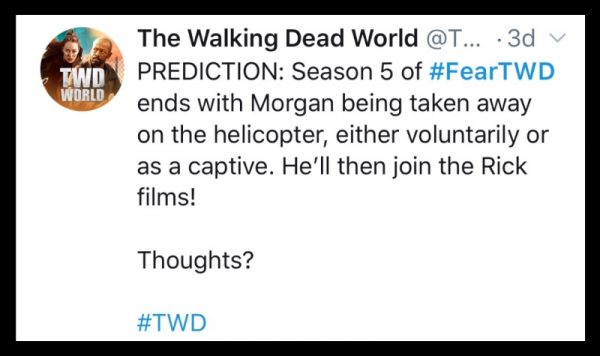 @BrandonDavis always dives deeper. This week he had all the Easter egg scoop. 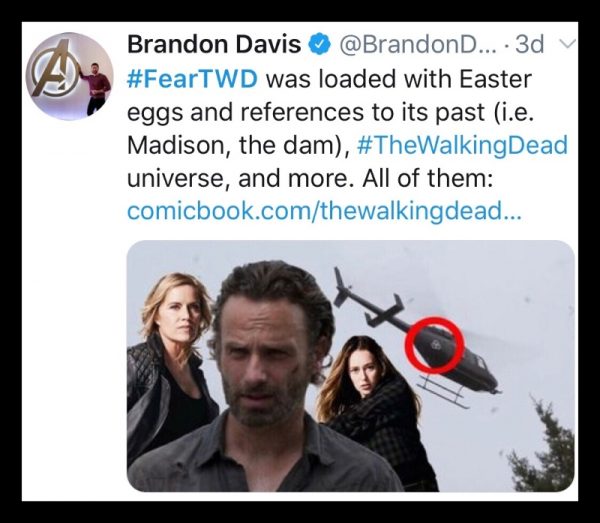 Great episode. Moved the plot forward. Gave us some warm moments – the Camper Kids, Charlie, Daniel and Strand (well, at least Daniel didn’t shoot Strand). Offered more #TWD crossover with that dramatic helicopter liftoff. Left us with the wee mystery of Daniel’s destination. Maybe you’ll find hints in this video about his journey?

In other news, most of the #ftwdfamily got together for brunch. Who doesn’t love a good brunch with friends?! 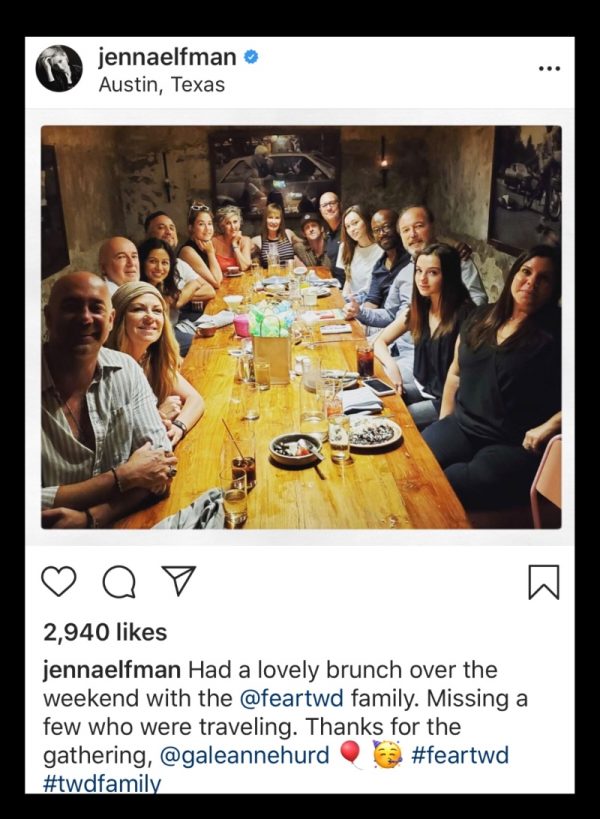 We have a Season 5B premiere date – August 11th. A super short hiatus – best news ever. 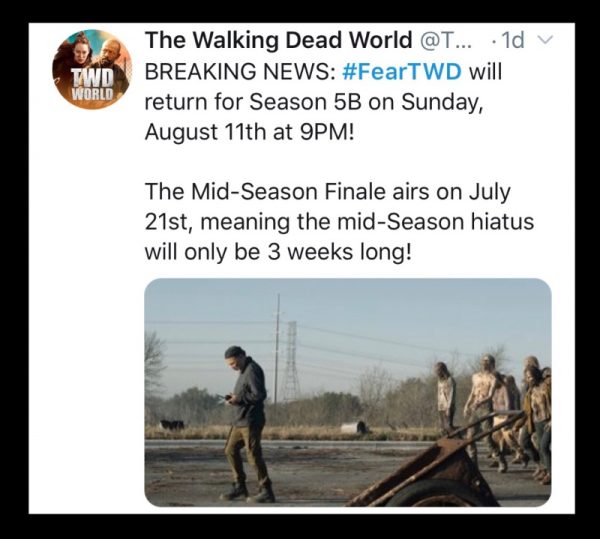 Great #SDCC news. You’ll need to be in Hall H for the #TWD and #FTWD panels! 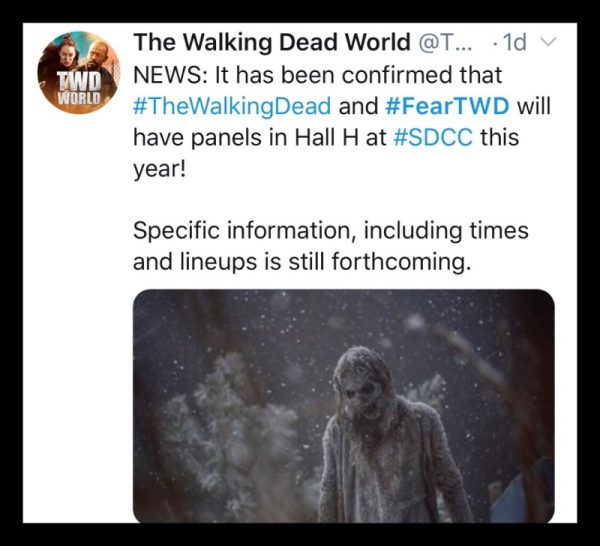 Who is going to SDCC?