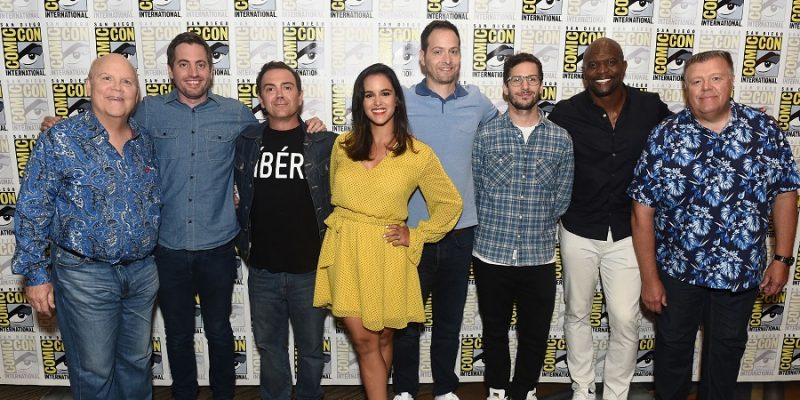 It is no surprise that Brooklyn Nine-Nine was one of the more popular properties for San Diego Comic Con attendees this past weekend; and NBC really delivered for fans both old and new. Brooklyn Nine-Nine is one of those shows with such a passionate fan-base, so anytime they attend an event – you can be sure that fans will go to great lengths to see their favorite cast. NBC decided to bring a very unique, interactive offsite activation for Brooklyn Nine-Nine to attendees of San Diego Comic Con – and while there was always a line (to be expected) each and every individual who went through the experience left with a smile on their face. At San Diego Comic Con it’s not just about the panels, or which show is doing what: it’s about the fans, and NBC blew fans away with their Brooklyn Nine-Nine activation.  Fans joined the 99th precinct as a “new recruit”, and then were set to various challenges around the office. The winning team always won a prize, but win or lose – you had a blast inside. Though I was not on the winning team (go team blue!) I truly enjoyed every moment spent inside the precinct. The actors were spot on, the challenges were goofy & fun, the whole thing really captured the essence of San Diego Comic Con and Brooklyn Nine-Nine. My personal favorite, the photos of Cheddar – it was a beautiful way to acknowledge Stewart (the good doggo who played Cheddar on the series) and to remember him in the best of times.

Brooklyn Nine-Nine also took the time to surprise some of their super-fans with a special walk-through of the offsite. It was really no big deal, you know….. just the cast making a special appearance to surprise some of the biggest Nine-Nine fans! Seriously, if you thought that the cast of Brooklyn Nine-Nine couldn’t get any better – you stand corrected. Because they had an absolute blast surprising some of their shows biggest fans on Saturday of San Diego Comic Con and I’m pretty sure the fans were pretty ecstatic themselves!

As you can see, both the cast and the fans were loving every second of that special experience – and it is something those Nine-Niners will never, ever forget. It’s the things like this that happen all over San Diego Comic Con that make it a truly special show to attend. But for these special fan moments to take place, you gotta have a wonderful show like Brooklyn Nine-Nine, paired with a wonderful cast, mixed together with a wonderful network like NBC. San Diego Comic Con is filled with all kinds of special moments, but something like this from Brooklyn Nine-Nine will always sit pretty high up in the record books.

Brooklyn Nine-Nine also brought one of the most popular panels to the convention, on the busiest day of the convention. Of course, Brooklyn Nine-Nine had no problems filling up the room with fans, giving them a small taste of what’s to come in Season 7, a call to action for the fans to help get Bruce Willis on the show as a guest star, and the sexiest track suits you’ve ever seen in your entire life. Oh yeah, the Brooklyn Nine-Nine cast were the best dressed cast for any panel that took place over the weekend at San Diego Comic Con, and I want to know when that tracksuit will go up for sale in the NBC store – because I have needs. The panelists included: Dan Goor (show runner), Andy Samberg (Jake), Melissa Fumero (Amy), Terry Crews (Terry), Joe Lo Truglio (Boyle), Dirk Blocker (Hitchcock), and joel McKinnon Miller (Scully). Appearing in a special cardboard form of themselves were Stephanie Beatriz (Rosa) and Andre Braugher (Holt). As you re-watch the first six seasons in preparation for Season 7 – I want to leave you with three critical pieces of information from the Brooklyn Nine-Nine panel during San Diego Comic Con…

Remember to use #NBCSDCC and #Brooklyn99 on social media!