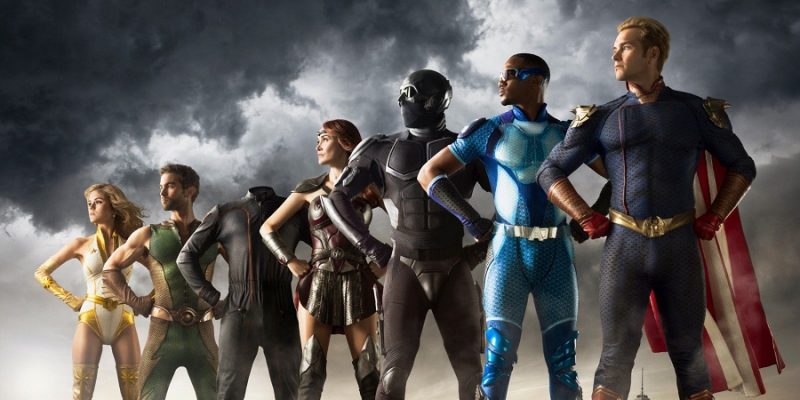 “The Boys” – at San Diego Comic Con and Beyond

Taking over Ballroom 20 on Friday of San Diego Comic Con, The Boys treated fans to a hilarious Q&A and welcomed us into their world. Joining the panel were: Karl Urban, Jack Quaid, Antony Starr, Erin Moriarty, Jessie T. Usher, Laz Alonso, Chace Crawford, Tomer Capon, Karen Fukuhara, and Elisabeth Shue – along with executive producers Seth Rogen and Eric Kripke –  moderated by Aisha Tyler. The Boys knows how to kick a panel off the right way… with the announcement that Season 2 WILL be happening, and a new cast member has already been added to the team. Not only will The Boys be getting that second season (huge props for that to the cast and crew) but next season Aya Cash will be joining as the role Stormfront! Aisha got the conversation started, with a bit of background about the show, the characters, and the wild ride that we are about to embark on with The Boys. When it comes down to it, something that is really missing from the “superhero genre” is this idea of morality and would superheros really be good people? Think of your worst enemy, now give them super-powers… you really expect that person to use their powers for good? The Boys is finally here to fill that hole within this genre. What would really happen if you gave a mortal person immortality? Would everyone really use those powers for good? The panel left us all with the ultimate decision of would you side with The Boys or The Supes?

It’s very unconventional art, and not one that you’d expect. – Erin Moriarty (Starlight).

Season 1 of The Boys premieres on Friday, July 26th, 2019. Here is one final look at the show before it’s release.

Hands down Prime Video had the best off-site attraction during San Diego Comic Con, featuring The Boys, Carnival Row, and The Expanse. Each show had their own experience, and each one was done extremely well. But The Boys stood out, for multiple reasons; and was easily my favorite offsite of the entire weekend. Fans had to help solve the murder of a Supe, at the audio/visual store where Hughie works. You team up with some of Butcher’s crew, in order to solve and then cover up the murder of a Superhero. Attendees had to work together quickly to find clues from around the destroyed store, and ultimately destroy all evidence of the crime before the police, and Supes found out about it. But more than just an interactive escape room, some eagle-eye’d fans were treated with a visit to a super, secret comic book store. That could only be found by calling the number on one of the posters in the window of the first experience. Prime Video really pulled out all the stops for their massive offsite activity – but The Boys was easily the best of the three.

In addition to the best off-site, the Amazon Prime Video Experience hosted three separate parties over the weekend at San Diego Comic Con. Including a screening party for The Boys on Friday night. Including a little birthday celebration for Chace Crawford with a specially themed cake for his character: The Deep. Fans were treated to a special screening of the new series, plus some amazing cast interactions. Yet another reason why The Prime Video Experience from Amazon Prime Video was on fire during San Diego Comic Con. With the best off-site and some of the best fan parties happening at the convention.

I am soooo looking forward to The Boys on Prime Video this Friday, July 26th and I’d love it if you all wanted to discuss with me more! Though all episodes of The Boys will be dropping at once, I want to keep this conversation going for the next few weeks – and you can help me out with this! Every Friday evening at 8pm EST / 5pm PDT I’m going to be hosting a watch along over on Twitter, we will watch an episode of the show, have a place for real time reactions, and generally just have a great time. I will also be hosting weekly radio shows, where you can call in and chat with me about watch along episode. Make sure you’re following both @ThreeIfBySpace and @CONtessa_966 on Twitter to join in on the fun. Stay tuned, because soon I’ll be posting more information about the weekly radio show “The Boys: F**k Supes Support Group” – so you’ll know when & how to call in and chat with me about The Boys!

Comment below, or find me on social media and let’s keep the conversation going! Don’t forget to use #TheBoysTV