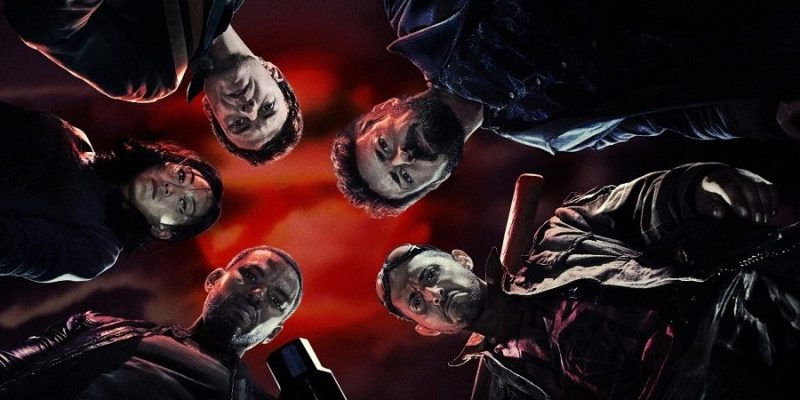 The Boys – based on a spectacularly dark comic book of the same name by Garth Ennis – is coming both to Amazon Prime Video and San Diego Comic Con this July! The Boys is an infamously violent and dark comic – that Prime Video will be adapting to our television screens, for those with a twisted sense of humor that is. This project has been in development on and off for years, with visionary Eric Kripke at the helm. I am lucky enough to have caught a sneak-peak of episode 1 a few weeks back – and man does this show not disappoint. I’ve also been wearing my “F**K Supes” just about any chance I get, because the premise behind this story is one that’s intrigued me for years. Let’s get real for a second, if you had extraordinary powers – what would you do with them? If your worst enemy had extraordinary powers – what would they do with them? In a world full of do-good superheroes, The Boys shines some light on what would probably happen more often than not if random human beings suddenly became supers. It may just be the “Slytherin” in me talking, but come on – you wouldn’t do some “terrible” things if you had the super-ability to? Which is why The Boys is going to do so well on Amazon Prime Video later this year; it’s visually stunning, morbidly written, with just enough WTF to keep everybody crazy interested in what comes next. This show is definitely NSFW – and perfect for a twisted or dark sense of humor.

Join executive producers Seth Rogen and Eric Kripke, along with series stars Karl Urban, Jack Quaid, Antony Starr, Erin Moriarty, Jessie T. Usher, Laz Alonso, Chace Crawford, Tomer Capon, Karen Fukuhara, and Elisabeth Shue, with moderator Aisha Tyler, for a behind the scenes look at their upcoming series. Based on The New York Times best-selling comic by Garth Ennis and Darick Robertson, The Boys is a fun and irreverent take on what happens when superheroes – who are as popular as celebrities – abuse their superpowers rather than use them for good. It’s the powerless against the super-powerful as The Boys embark on a heroic quest to expose the truth about The Seven.

The Boys: World Premiere Fan Screening and Party
What: Cast & creators of The Boys will join fans for an exclusive 2-episode sneak preview ahead of the series
premiere.
When: Friday, July 19 from 7 p.m. – 11:30 p.m. PT
Where: The Amazon Prime Video Experience at Comic-Con, MLK and 1st, San Diego, CA 92101
Important Info: For our parties, 21+ to attend, ID required.
The series is rated MA.

Tickets are currently sold out – but a GA line will be available for those without advanced tickets.

I know that I’m pretty excited for The Boys – and will be hitting as many events at San Diego Comic Con as I can! Tune into The Boys on Friday, July 26th only on Prime Video!

Comment below, or find me on social media and let’s keep the conversation going! Don’t forget to use #TheBoysTV #TheBoysTVSDCC