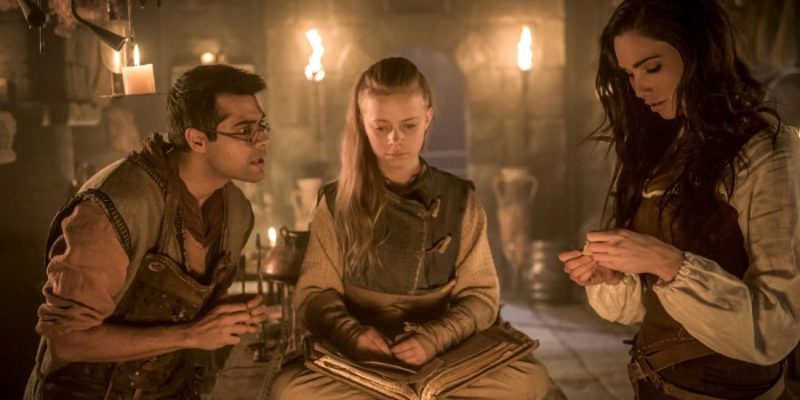 Well, I’m gonna go out on a limb here and say that there were some pretty interesting developments in episode 203 of “The Outpost.” We’ve got a bunch of stuff going on and some interesting relationship action developing – or not developing, depending on who’s lying, who’s afraid, and who is reading the situation correctly. And, after an episode away, our hero is back, which should lighten all our hearts even though he’s in the midst of what seems to be a fairly pure evil – but is it?

Mmmm, much to consider. However, before you take another foot forward (or scroll down another line of text), know that SPOILERS are ahead. Thar she blows, SPOILERS are two degrees to the port quarter and if you don’t want to be SPOILED, stop here. If you’re good to go, join me on this fun little adventure called “The Outpost.”

Where to start, where to start? Well, I think I’ll start with the saga of Everit Dred. Turns out, Garret Spears is alive and not so well in the tender care of Dred, who has hauled his bloody and beaten (but alive) carcass before The Holy Three, a trio of folks with no sense of humor, a vengeful spirit and a really interesting wardrobe style. While they are happy to have Spears as a bargaining chip/pawn/source of information, the man I constantly refer to as “evil white-haired man-bun guy” isn’t a success in The Three’s eyes. No, quite the opposite, in fact. 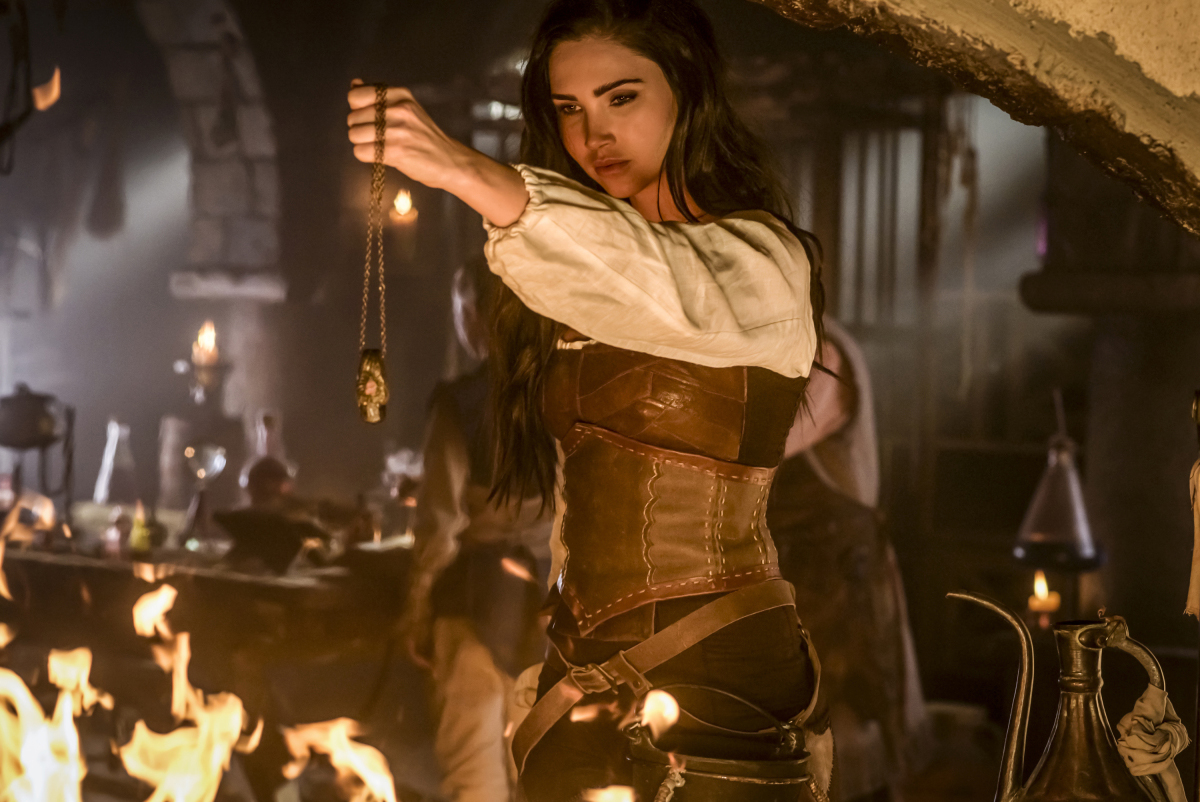 There is a little mental telepathy type of agonizing torture, followed by the edict that normally he would forfeit his life for failing to kill the “false queen,” but instead will be dealt an even harsher blow – he will spend the rest of his life in a room so small, he can’t even lie down in it. Now, I find this attitude somewhat punitive for Dred, wascally wabbit that he is. But I admit, as much as I loathe him, in that moment, sprawled out on the floor, man-bun messy and unkempt, undulating under the searing gaze of The Holy Three, I felt some sorrow for him.

I guess I flash back to a long ago movie and think, “Nobody puts man-bun in the corner.” So, given the developments of Dred, which took up a small amount of time, coupled with the developments of Garret, perhaps, just perhaps, the Dred-Spears tag-team could be forming down the line? Are you with me? Do you see the potential? Dred-Spears for the tag team title, my friends.

Stay with me on this one. Garret ends up in the hands of an attractive healer, “Sana,” who would seem to be not only attracted to our handsome lad, but also has some ulterior emotional motivation. Conversely, a very large man titled “The Tormentor,” simply wants to beat the crap out of Spears with great glee and gladness. I like a man who takes pride in his work, has that special glint in the eye. So we have the healer trying to heal and help, while The Tormentor is, you know….tormenting Spears. It’s a wonderful back-and-forth…until it isn’t.

Now here’s where it gets a little tricky. Turns out, in the last go-round with the Tormentor, Spears dies. That’s right, he’s dead. Tormentor went full enthusiasm on his playmate and we are left with The Tormentor and Sana, with Spears’ body on a table before them, explaining to The Holy Three why their plan can still be salvaged. Zoinks, Shaggy, that was a twist. Want a bigger one? The two appear to be husband and wife. Still more twists? 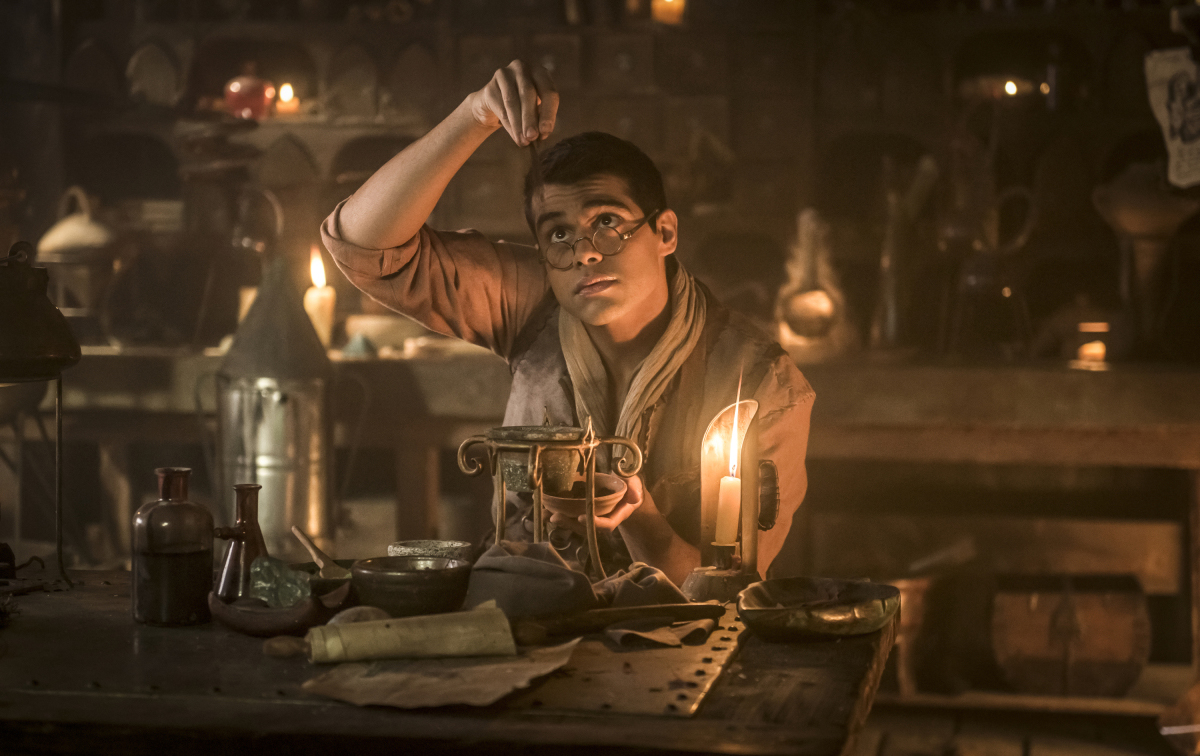 Sure, how about The Three seemingly have the ability to bring the dead back to life, because a little shiny button on one of The Three’s forehead illuminates and suddenly Spears is breathing again. You know, he was just mostly dead, which is a lot different than all dead (you get the bit, right?).

But I don’t know. The gentle brush of a hand, the tender kiss, the longing in the eyes, there seemed to be something behind all that. Let’s face it, Garret is catnip to the ladies of this land, a professional soldier of chiseled good looks coupled with linen underwear. I mean, it could simply be part of the plan, but there was something there – though what I was sensing could  have just been her evil vibe coming through in an evil way.

However, this all brings me back to Dred. Garret’s a prisoner who is ostensibly being played. Dred is a prisoner who has fallen out of favor with The Holy Three. I sense that the Man-Bun and the Chiseled features could run into each other in their various tortured states and form an alliance for mutual benefit – escape. I may be working too hard at this theory but it offers a lot to like for my tastes, so I’m gonna go with it. Join me, won’t you, and we’ll think tall and roguish thoughts about a Dred-Garret pairing.

At least we know he’s alive. And we know that Sana has lied to him about a number of things. And while, initially, I was for the Healer-Garret couple potential, I’m less sure that’s going to happen now. We shall see. So, while Garret was getting his eyes blackened, his nose broken, his face caressed and his lips kissed, what else was going on? 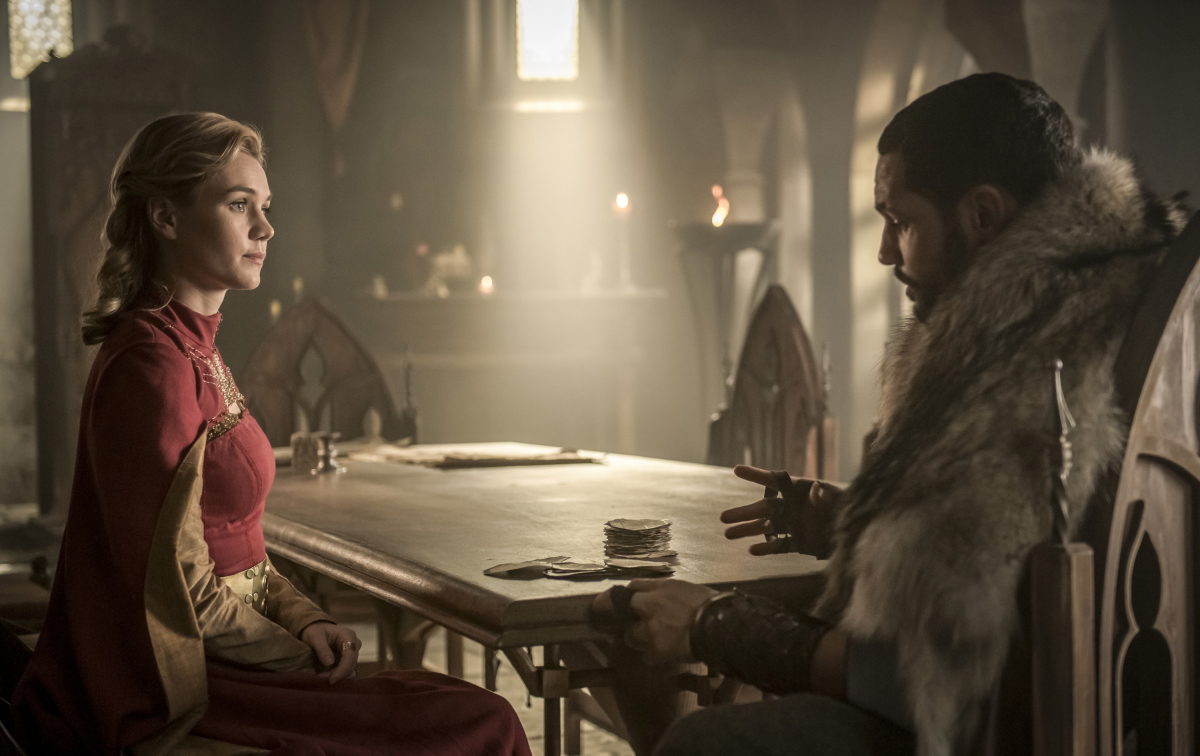 Welllll, Talon pulls a fast one on Rebb in the forest, snagging back the Dagman and keeping her precious gift. This puts a bunch of things in motion as Rebb eventually offers her services to Queen Gwynn, whose instincts tell her to be cautious. She talks with Talon, who asks for her trust and they have a nice slumber party-type moment on the big bed as they hash out a few things. Gwynn needs to trust someone and it’s clear that Talon will be that someone – or at least the first someone (looking at you, Tobin).

Unfortunately, Rebb isn’t done with her own little brand of torment as she sneaks into Janzo’s scientific lair and accosts the Dragman, who has been left alone for a few moments. Rebb proceeds to take the Dragman’s life, burn all the names of the demons the Dragman had given to Talon (Turns out, Talon is ‘The One’), and skulks away like the plague she truly is. Fortunately, the Dragman hid one demon name on her person (or did Rebb plant that? Inquiring minds want to know). So, the question of the Demon army and Rebb’s people still hang in the air like wet, stinky laundry. Will it be freshened by a light breeze or simply stink worse should they get through the Portal.

One thing’s for certain, I believe that Talon has been emboldened by the Dragman’s confirmation that she is, indeed, “The One.” How that manifests itself in the coming episodes should be interesting. Talon, for all her woman power and warrior vibe, is in an unsettling position. She knows, but I’m not sure she truly believes as yet, something she’ll need to overcome to help the queen.

Should I say a few words about Tobin? Okay, here they are – dude, you’re “I’m cool, baby, pick me, pick me” vibe really isn’t turning the queen’s crank. While I applaud the offer to play strip cards with her, she ain’t that type of lady. Yes, you’re a handsome rogue in that Han Solo, Idris Elba, Errol Flynn type of way, but the lines your handing out wouldn’t have gotten you on the dance floor at the local disco in 1979. You need to know your lady, my friend. 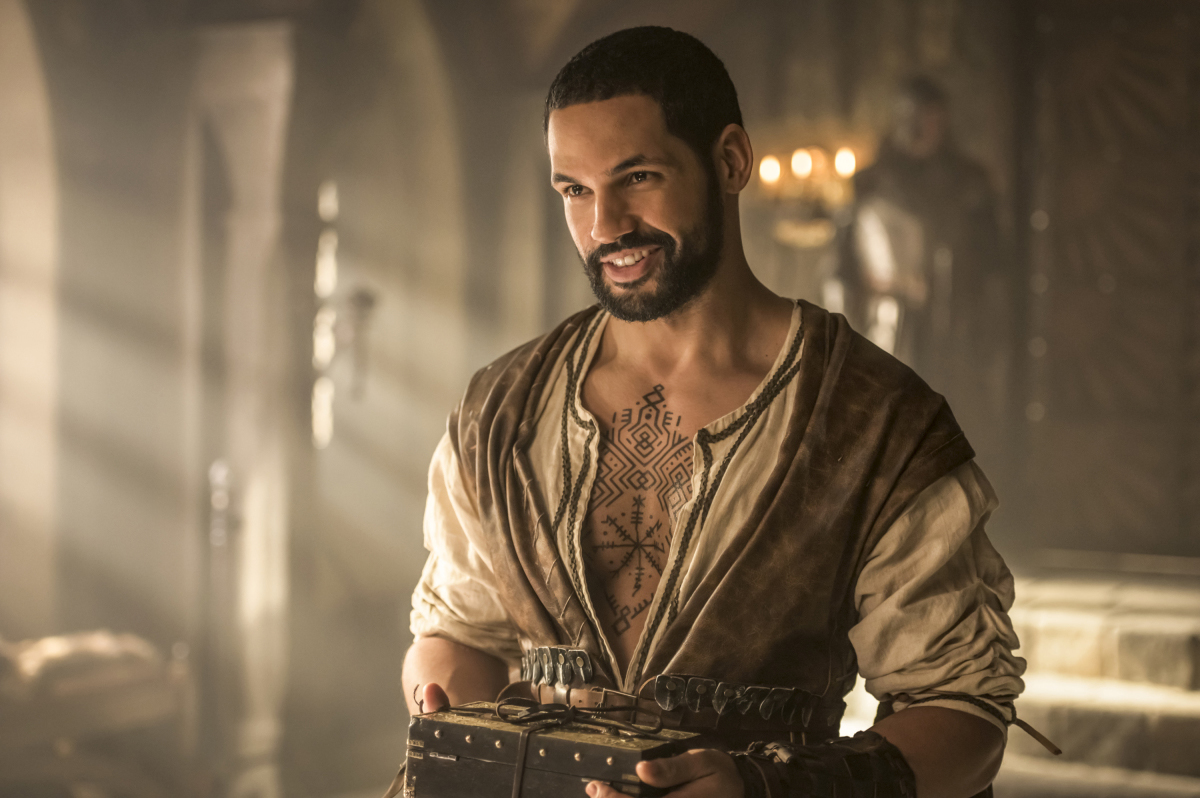 And right now, even though your fox-fur-over-the-shoulders runway look is dapper, it’s not nearly enough to win Gwynn’s hand – or any other part of her. Go back to your tent, recalculate your musky coolness and take a different tact. Just my advice.

Now, you know who has game? Janzo has game, and Naya very nearly came under his spell in this episode. Be careful about who you coach on the wooing front, you just might become the woo-ie (is that a word). Once again, I’m not sure there’s any character on “The Outpost” that’s come as far as our lad, Janzo. A new haircut, better posture, some very nice threads (who does the costuming for this show? It’s really interesting), and a mind that seems bent on bringing Talon into his scientific fold (if you know what I mean).

He inadvertently gave Naya a taste of the Janzo vibe and she liked it. Now, when he tried it on Talon, it produced a laugh. Here’s where the issue is, Janzo. While Naya’s advice may be sound with normal women of the court or young maidens in the village, Talon is not those type of women. As with Tobin, you need to know your lady. Soft, pretty words are like fingernails on the chalkboard to someone like Talon.

My advice, try to drink her under the table. Well, maybe that’s bad advice. But back to the point – know your lady. You’re getting some bad advice at this point, Janzo. Just wanted you to know.

So, The Tormentor and Healer have five days to break Garret before the Prime Order marches for The Outpost. In the meantime, the queen is terrified, Talon is unsure, the whole demon army thing is on hold, Rebb is out making merry mischief, Tobin is currently the strikeout king, and Dred is in a box of a cell wondering how it all went wrong. Essa Khan, we miss your cool, neck-biting presence.