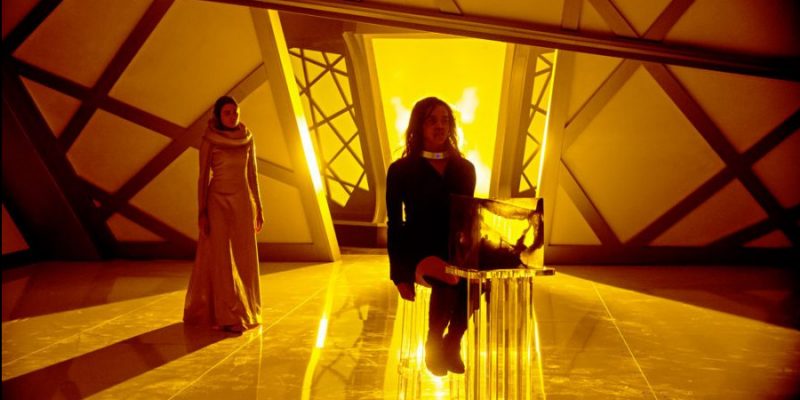 Some high emotions emanating from the screen as Episode 503 of Killjoys danced across our eyes and feelings the other day. A wonderfully revealing episode that saw some success, some failure, and some revelations that should prove very interesting moving forward. And, it appears, we lost one of our players in a true “the needs of the many outweigh the need of the one…or the AI.”

But before we delve into, I have to say: Stop, in the name of SPOILERS, before you break my heart. That’s right, SPOILERS are ahead and if you don’t want to find yourself beached on the coral of SPOILERVILLE, turn that boat around and sail away. If, however, you’re cool with what’s to come, by all means, venture further into an episode titled, “Three Killjoys and A Lady.” 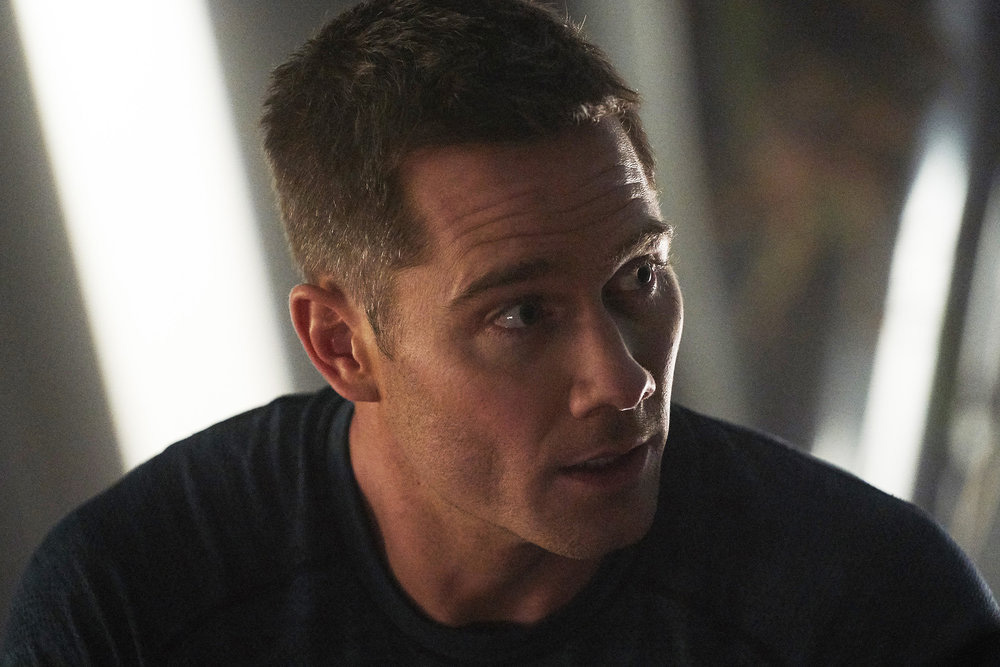 Right out of the shoot, it’s clear this is a tough episode for Johnny. There’s torture at the hands of The Lady, yes, but there’s so much more going on here. Johnny seems to handle the physical torture with his usual deflecting sense of humor, but it’s clear he’s still dealing with the loss of Dutch as his wife. Add to that what happens with Lucy later on and it’s clear Johnny was having a bad few days right there.

The Lady is after Jaq and she hopes one of the Killjoys will break and appears to believe that Johnny is the weak link, eventually telling him “You, you were pacified so easily, like it’s what you always wanted. Wouldn’t you like to go back to that life, to her?” Mmmm, apparently the lady understands that Johnny has feelings of some sort for Dutch and tries to manipulate that as things move on. Fortunately, her best-laid plans went for naught.

Why? Because Team Awesome force is as unconventional as it is dangerous – particularly when sifting through their respective relationship issues. And with the help of Khlyen, things get interesting in a hurry. He frees D’Avin, who doesn’t appear to have been tortured at all, who frees Johnny and they eventually free Dutch. They find Lucy and take off for who-knows where?

Firstly, that was way too easy. Dutch seems to sense as much when they’re off and away, and later we see that, indeed, The Lady was trailing them from a safe distance. But aboard ship, the tension grows as fire and a damaged engine would appear to be the work of a saboteur. Throw in the “space hickeys” they are all now sporting and the accusation and suspicion game starts to get fully engaged. 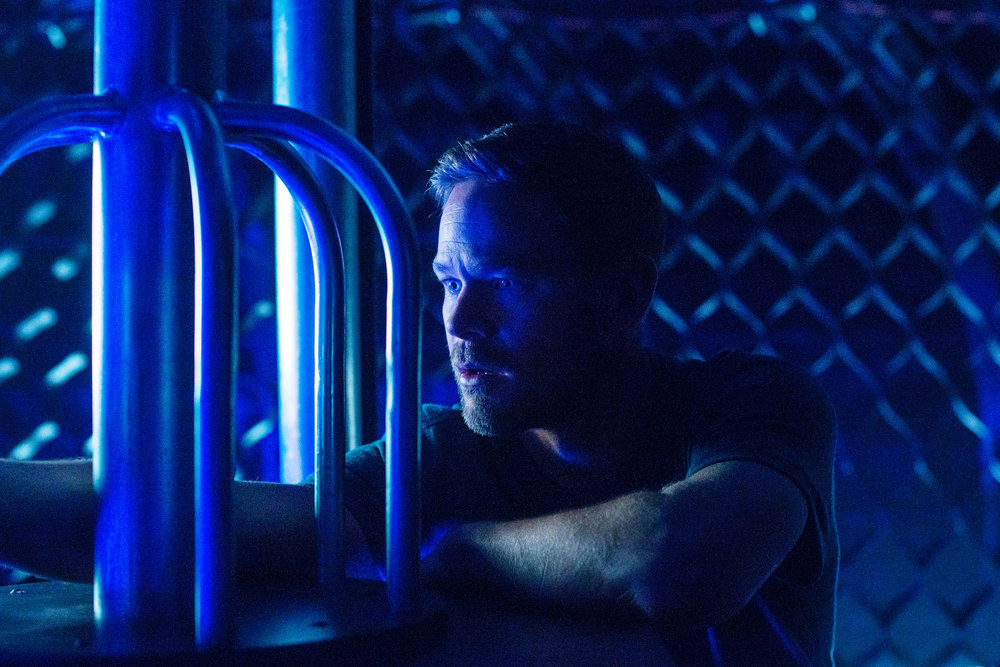 And it’s here where the path to Lucy – and her demise (but is she gone forever?) begins. Issues occur, fingers are pointed, and a brain scan seems to reveal that Dutch has the abnormality. Is Dutch now “The Lady?” Johnny and D’Avin chase her through the ship until she meets them on the bridge – in a towel. A fun little moment there as they all strip because Lucy has a privacy setting that’s engaged whenever two people are together naked. “I mean, I’m kind of into it, but..” D’Avin says, but this is no joke.

It becomes clear that the problem is likely Lucy. Johnny does some digging and finds some odd code in her programming, which sets off a game of cat-and-mouse between the crew and Lucy, who has obviously been programmed to protect herself. While she shocks D’Avin and Dutch into unconciousness, she then does a little bit of mocking of Johnny’s efforts to save his friends. Lucy has a wonderfully dry wit, tinged with just the right amount of obnoxious superiority that it never ceases to make me chuckle.

In the end, Johnny is able to override the evil bit of the programming, enough for a physical manifestation of Lucy to appear and tell him he needs to shut her down. It’s here that we again see Johnny struggle emotionally and really get a full grasp of how tied to Lucy he truly is. She’s a machine, an AI, to be sure, but there’s a tangible relationship there that he simply doesn’t want to let go of. In the end, it’s Lucy who makes him realize that’s exactly what needs to happen.

“I can’t do this without you, girl,” he tells her. “Thank you for riding shotgun with me,” Lucy replies. 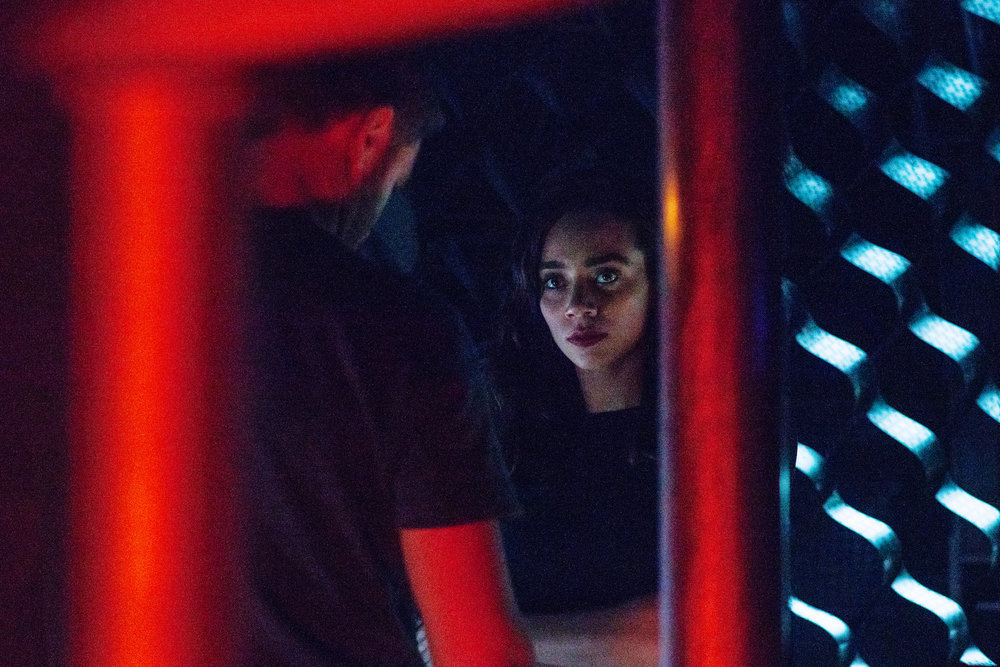 I think it’s important here to note the marvelous work Tamsen McDonough does with Lucy. Sometimes it’s easy to only hear a “computer” voice when Lucy is doing her thing, but there’s a personality there, a vibe and feel that McDonough does a tremendous job of giving us through subtle inflections, humor, etc. As much as Killjoys is about so many wonderful characters, it’s important to note that Lucy is certainly part of that tapestry that we enjoy.

So here’s to Tamsen for doing that hardest of all things, creating a wonderfully complex and entertaining character with just her voice. In the final scene with Johnny, there is a clear and deeply enjoyable relationship between the AI and Johnny – and the sacrifice that Lucy tells Johnny she must make, and he must instigate, has to be done. It’s a tough one, that’s for sure.

However, want some good news. There’s that chip that Johnny took out and I’m guessing that at some point, he figures out how to leverage that into some sort of Lucy-like device. I’m not sure we’ve seen, our should I say heard, the last of Lucy. But for now, she’s on a chip around his neck. Again, Johnny had a tough episode and is certainly dealing with a lot of emotions – towards Dutch and now losing Lucy.

I have to say that while I know she’s an evildoer, I have found myself enjoying the work of Alanna Bale as The Lady. I don’t know what it is, but I like the voice, the way she delivers The Lady’s words, the interesting little physical quirks that she brings to the role. I think she and Khlyen are going to have an interesting relationship moving forward. I mean let’s face it, she expected Khlyen to play a part in freeing our heroes, in fact she counted on it. 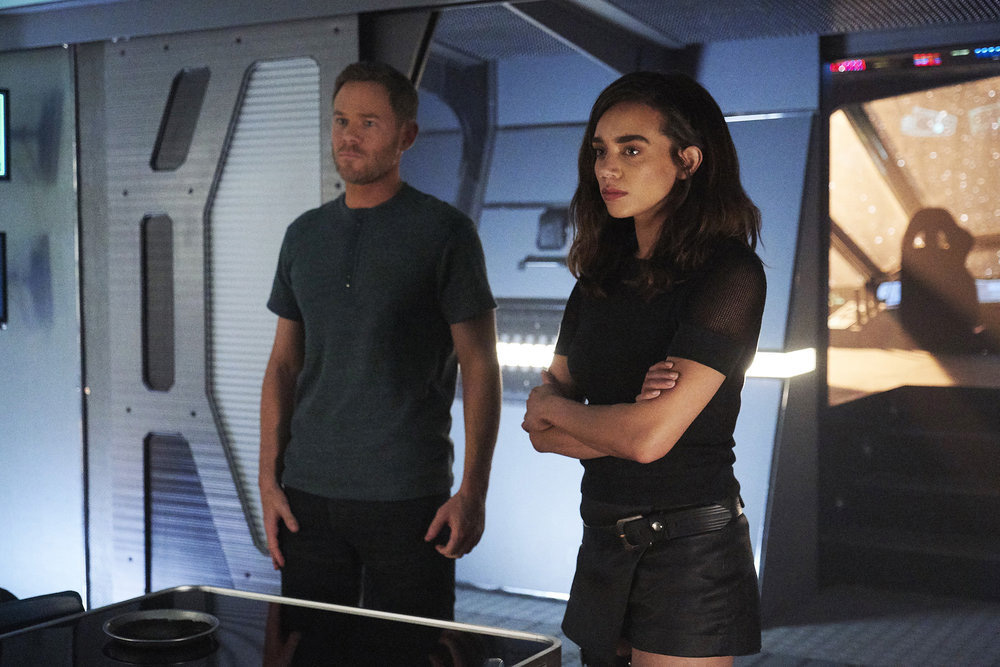 And through all of that, he still lives. I think that surprises him as well, which leads me to speculate that a little of the humanness of the former owner of that “skin” may be rubbing off on The Lady. I think she’s fond of Khlyen, finds him interesting on some level. That will need watching, too, I suspect. It’s interesting to watch Khlyen work because it feels as though he’s providing assistance to The Lady, but you can’t help but also get a feeling he’s manipulating things a bit.

The “If you cannot hunt, perhaps you are a fisherman” analogy and the subsequent idea of using our trio as bait for Jaq, seems like a blatant betrayal….but I’m not so sure.

Khlyen seems to have an unshakable trust in Dutch and the gang to overcome long and deadly odds. He’s certainly been right most of the time. So, I wonder what other little nuance Khlyen will show us as this moves forward. Obviously, things are going to be very interesting as Johnny, Dutch and D’Avin have been moved to a supermax penal facility.

Can anyone not foresee plenty of fun mixing and mingling with the felons? Particularly once the population finds out they are Killjoys? I assume the troops will run into an old friend or two amongst the prisoners. That should produce some butt-kickingly good fun.