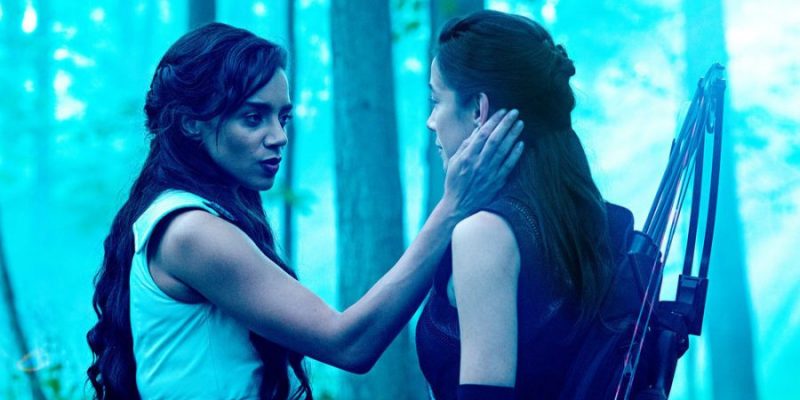 Where to start, where to start? So many interesting moments in this episode of Killjoys, it’s hard to pick a storyline to kick off this review. If nothing else, Episode 506, “Three Mutineers,” offered some potentially exciting developments and more than a couple fascinating relationship-related moments. And perhaps that’s where we’ll start.

But first, it is my duty to announce that SPOILERS are coming. That’s right, SPOILERS are on the horizon, so if you haven’t seen the episode yet, and are sensitive to SPOILERS, do not proceed. If you don’t give a crap one way or the other, then take my arm and let’s stroll down the Killjoys Boulevard, shall we?

There was a lot of relationship stuff going on in this bad boy. Pree and Gared, Johnny and Dutch, the Q’Resh siblings, Sparlo and Jeers, and then the Aneela-Delle Seyah reunion. Let’s start there, shall we? The return of Aneela is nothing but a ray of sunshine, for my money. First and foremost, we get to see Hannah John-Kamen in the dual roles of Dutch and Aneela, a feat HJK does with much aplomb and dexterity.

Aneela, Delle Seyah and Jaq are traipsing through the woods kind of sorting things out when a kiss between Aneela and her former lover reveals something interesting – Aneela is still Hullen, while Delle Seyah is now human. That discovery casts a bit of a pall over the two as they continue on their journey, which we find out will include trying to book passage out of the area — for only two of them. Jaq will take his place in the cube while our heroines head out to play their part in the battle with The Lady. 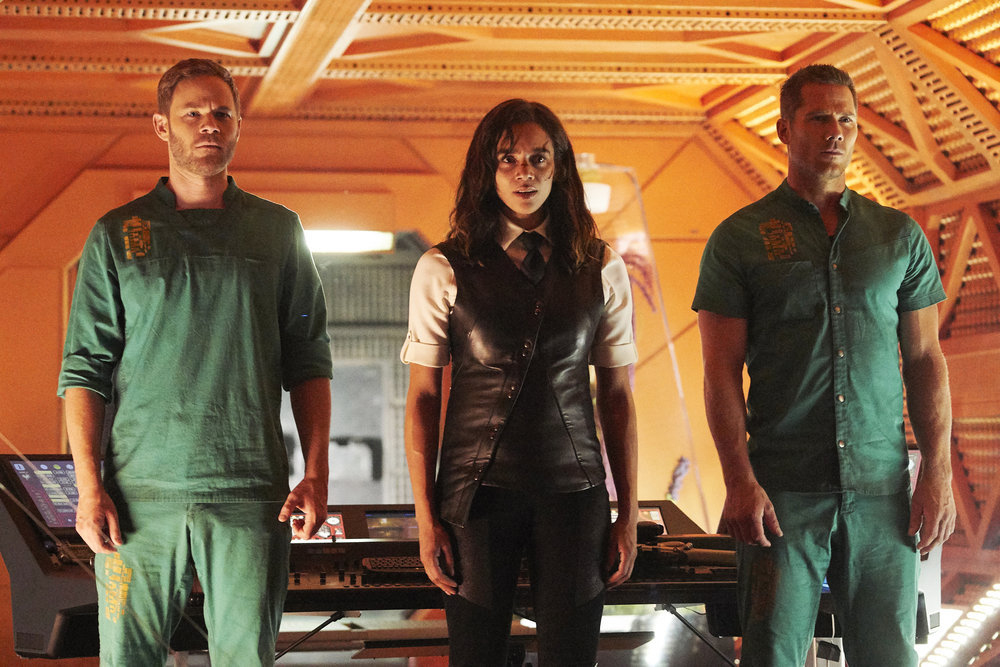 What’s interesting here is that the awkwardness the two feel after the kiss continues until a defining moment. Aneela demonstrates her strength at an encampment when Jaq is threatened by some guys who lost to him at cards. Did he cheat? Well, he talked about some tricks Uncle Johnny showed him, so I’m not sure he was on the level, but we’ll let that pass. When they come looking for their money,

Aneela, perhaps a bit frustrated with the turmoil she was feeling inside, unloads on the unfortunate fellow. “Touch my family again and I will feed you your own skin. Test me, human filth, and I will put my foot so far up your ass, you will taste my ancestor’s boots. Who’s first?” That’s some quality trash talk right there. Very nice.

I hope I get the chance to use this line on someone someday because it’s magical in its threatening tone and humorous nuance. Second, HJK is at her magical best here with Aneela’s voice, which tends to be somewhat lilting, as the threats fly. It’s just an enjoyable, intense, verbal drop-kick that has this high-pitch to it. It’s wonderfully done and does the trick. It’s a great example of why I”m so impressed with HJK and her dual roles.

She delivers two distinct and interesting personalities that I sometimes forget are played by the same woman. The voice and look may be altered, but there’s a lot of subtlety being played out here as well, particularly physically, which sets a different tone with each. Just good, good work.

All this leads up to a conflict in the woods when Aneela talks down a bit to Delle Seyah about carrying Jaq’s bags. Aneela, our royal robin hood, has had enough. “Did you just throw forest filth at me,” she asks Delle Seyah (Who had lofted some moss and other flora and fauna at Aneela).  Delle Seyah admits her love for Aneela, but won’t accept being talked down to because she’s now human. Aneela, for her part, thought she’d lost her love.

The pair realize they’d imagined feelings of the other that simply weren’t true and find common ground. Some intensive lip action follows, prompting Aneela to tell Jaq to “go away, I’m going to be sexual with your mother now.” I love the phrasing of this little sentence. It’s so Aneela. Well done. The Aneela-Delle Seyah love story is quite interesting. Throughout this season, Delle Seyah kind of wore her sorrow at the loss of Aneela like a shawl. The memory was both warm and uncomfortable. 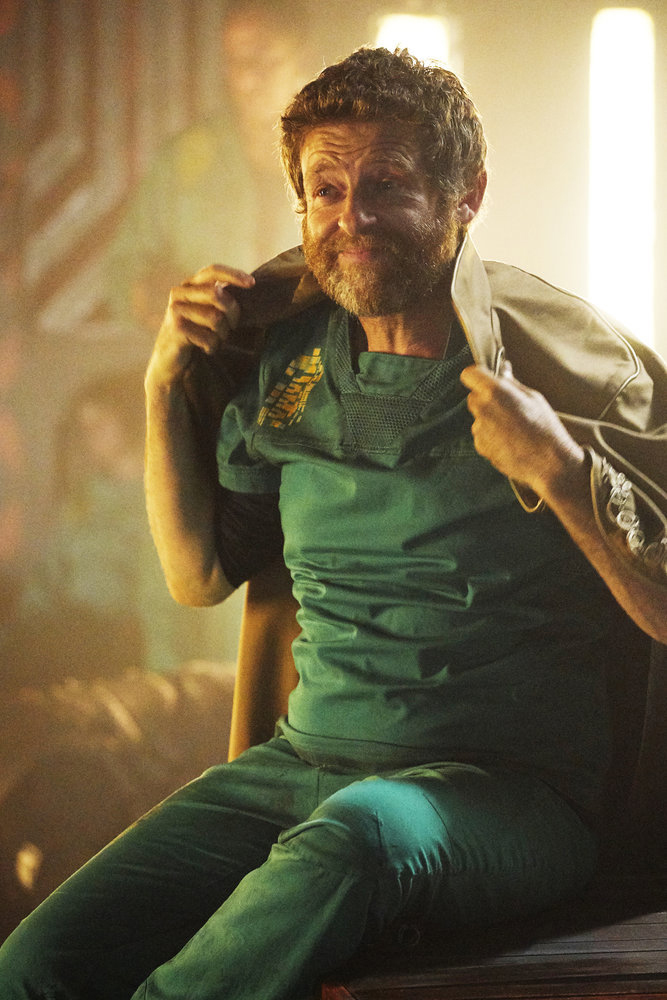 But relationships were popping up all over the place. Khlyen got to Gared and now is listening in on Pree’s identity card, a little gambit that saw us get a bit of Pree, Zeph, and the one and only, Fancy Lee. That’s right, Fancy is back in the game thanks to a new spray Zeph has developed. And when the Fancy Lee train rolls in, everybody rides. The spray is not foolproof in that it wipes the memories completely, so there’s a bit of relearning that needs to go on. “Am I a scientist, too,” Fancy asks after he gets a face full of Zeph’s mist. “That would make sense, I feel smart.” Delightful stuff.

I’m not a huge fan of Gared being used like that, but I suspect Khlyen’s motives are somewhat on the good side. I also truly enjoy the chemistry between Thom Allison and Gavin Fox during their Pree-Gared moments. There’s a subtle intensity and affection there. It comes through nicely. I find it very rewarding as a viewer when actors can fire up a response in me even when they’re on screen for short bursts. That, my friends, is skill and commitment. These two deliver it.

The game of cat-and-mouse with The Lady continues and it appears Khlyen is weaving an elaborate web featuring other characters to save his daughter (and soon, daughters). All that seems to fail when he witnesses an explosion that he thinks has killed Dutch aboard the Herk Supermax. As we know, that was a nice bit of trickeration featuring fusion bombs, a Q’Resh ship, and the fun little oddity of a cloaking device aboard the Herk Supermax.

Let’s face it, Johnny was more than a little excited about discovering that, wasn’t he? Fun to see him get to use it a bit. And with that, The Lady thinks Dutch, D’Avin and Johnny are no longer a threat. That’s just the kind of wiggle room our trio (or more) was looking for. We’ll see what happens from there. And again, Nucy played a fun part in all that. I like Nucy, but I’m suspecting the path back to Lucy will be successful. 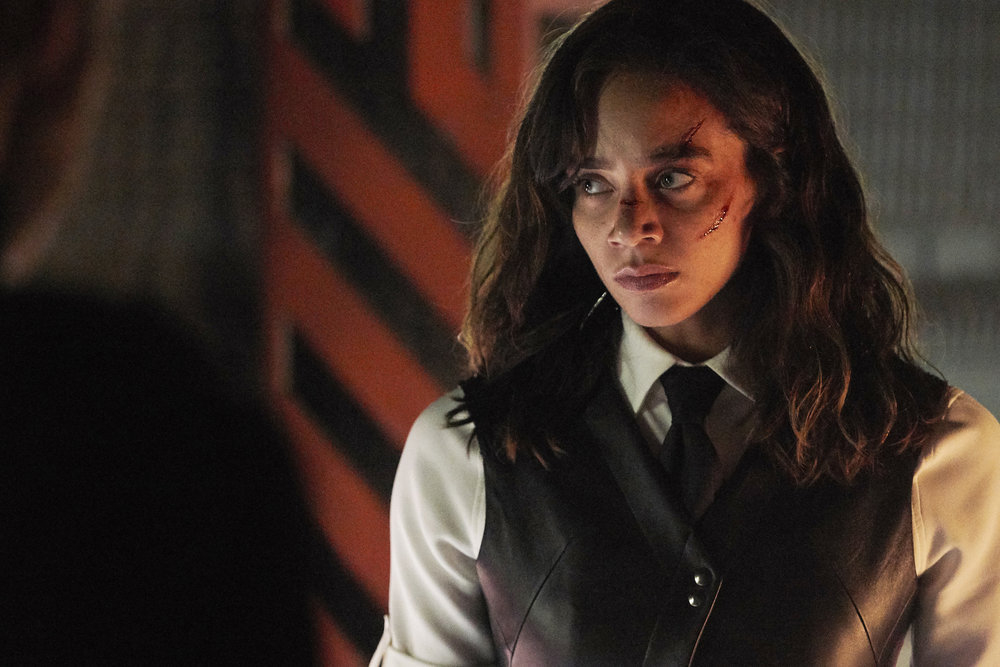 And did I, or did I not call the double cross between Sparlo and Jeers? I mean, early on you could tell this was going to go bad as Jeers seemed determined not to play nicely with anyone. I will admit, his blasting a whole is Sparlo’s chest was a little sudden, but provided the impetus for a little redemption from Mace later on. I liked that. I liked that even in the midst of a prison uprising, and the many issues these prisoners face, Mace still had some semblance of honor deep, deep in the soul somewhere.

Quibble all you want about the prison setting, but we got some fun new characters in Sparlo, Jeers, Mace, Rennika and the gone but not forgotten Calvert (I see you Anastasia Phillips). The additions have been a positive, in my view, and added some interesting fun as the story moved along. I’m good with that.

I found it satisfying that Mace got a chance to avenge his old boss Sparlo when the attempted ransom ploy with the Q’Resh security forces went south. Remember, the Q’Resh siblings are still on board and were to be ransomed off, something Jeers was particularly keen to do (Sparlo, not so much. Well, we saw how that ended up.).

Again, Dutch jumps in the middle of this little re-organization quite nimbly. She had a deal with Sparlo and when he got burned, quickly came up with a new plan. Like I said last week, there’s a lot of quick-thinking going on with our three heroes and Dutch siding with Jeers was a particularly brilliant ploy. Jeers is not only a bit nuts, but he’s also a narcissist, which allowed him to be walked into what was supposed to be a game-changing moment. Well, it was, just not what we expected. And that was fun. A shoot-out, Jeers in a headlock, and Mace exacting revenge for the death of Sparlo. Television sweetness.

So now, Dutch, D’Avin, Johnny and the gang on the Herk Supermax are essentially “in the wind” as far as The Lady (and Khlyen) know. That gives them an unexpected advantage and it will be interesting to see how they press that advantage moving forward. Are we looking at some prisoners as soldiers type of thing in the future? And what about Calvert? A skilled operator like that would seem to have a place at the table when contemplating mayhem is in the air. Here’s to hoping we get her back, because I do think she’s a tad nuts. And who doesn’t think that might be fun?

Here we are, the downhill run to the end of Killjoys. Four more episodes to bring it all to a conclusion that’s both exciting, explosive and satisfying. It’s fun to start to speculate how all these pieces are going to come together to defeat the lady – but it’s also a bit sobering. This wonderful show, these wonderful characters, are four episodes from leaving us. Makes a guy want to sit at the Royale and pour a few back with Gared, Fancy, Turin, Zeph and the others. I’m getting misty. “Pree, more Prosecco.”