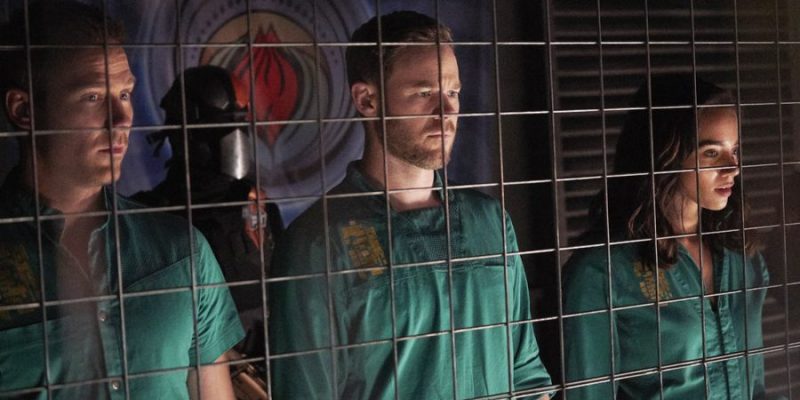 As we continue to watch and marvel at the seemingly inexhaustible amount of plans and counter-plans team Awesome Force is able to conjure up, particularly in this new prison setting, it’s something to be amazed and delighted with. And in episode 505 of Killjoys, “A Bout, A Girl” the prison trope delivered some of the finest plan-creation we have yet seen.

Oh, it all went in the toilet, of course, but that’s simply a device to keep us on the hook as Dutch, Johnny and D’Avin spin a fun web of optimistic mischief in the halls of the Herk Supermax.

This episode provided some revealing moments, some continued struggles, and more than a couple interesting surprises as we welcome back a familiar, but seemingly lost, face to the fray. How that changes things — for better or worse — we shall yet see.

But as a loyal member of the local RAC, it’s my duty to inform you that you have been locked and served with this SPOILER alert. That’s right, you’re wanted for potential SPOILER viewing and if you don’t want that on your record, you’ll avoid going a step beyond. SPOILERS can get you time in the Herk Supermax. If you’re good, then proceed. 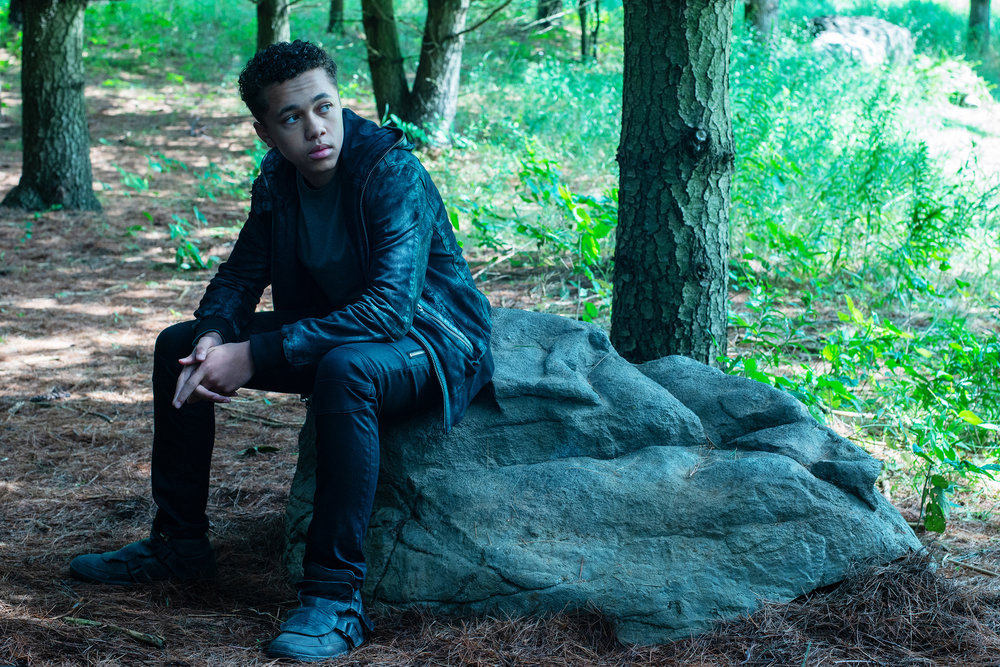 Most of this episode’s action revolves around our heroic trio trying to find a way to take over the prison ship and bring the fight to The Lady. But to do that, Dutch, Johnny and D’Avin faced long, long, long odds. I admit, I thought that maybe they were going to pull it off when they called in their favor with Sparlo, but the twist ending shouldn’t have surprised me.

In fact, you have to hand it to Sparlo to see a big picture opportunity here. And, on some level, he did keep his word to Dutch and D’Avin in terms of springing Johnny from solitary during the Bellaxion. He simply amended the deal to a more beneficial outcome, namely, taking Coren Jeers in as a partner when Johnny disabled the chips in everyone’s neck, except the key people Sparlo had asked for as back-up. It was a beautiful bit of manipulation from Sparlo and our heroes fell right into it.

There for a bit, I thought this episode would get a little too engrossed in the prison fight game as Dutch kicked some serious butt in her run-up to the title bout with the Q’Resh champion. She bit her first opponent’s neck, thereby getting the key chip removed, which kind of set this whole game board up. Unfortunately, as our guys were planning, plotting, making deals and hoping for the best, Sparlo and Jeers changed the rules. In terms of Dutch, though, it was a glorious romp through her ability to dispense some brutality. Hannah John-Kamen, you were a bruised and bloodied delight. 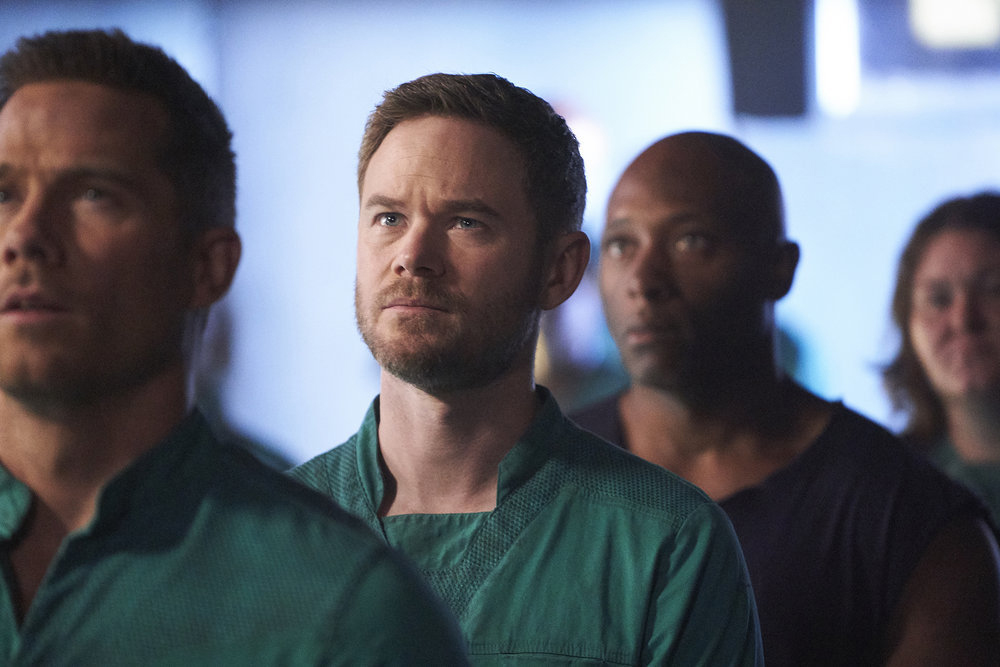 It was interesting, because when I first watched the start of the final match, I was trying to figure out why this grainy, shady figure seemed to be pointing a gun at Dutch from the deep background. Turns out, it was for a purpose – to kill the Q’Resh giant and begin the takeover. Johnny was powerless to stop it from the Warden’s office and Dutch and D’Avin learned a thing or two about prison politics.

I liked this twist, though as I said I should have seen it coming. I admit I didn’t. But that’s fine. It now adds another interesting layer on this whole “take over the prison ship” storyline. Someone’s going to get redeemed, I just don’t know who.

And speaking of redemption, it was interesting that Johnny ran across Warden Rennika, wounded and bleeding, in a prison hallway. I suspect that our warden, who was ready to bury our three heroes in various dark holes, is about to become an ally, perhaps an important ally, as the race to take over the ship continues.

Do I hear the strains of “Calvert, come out and playayaaa” echoing in the distance, the sound of Coke bottles clinking together in the background? My guess is Jeers and Sparlo have a moment and one of them ends up dead. We’ll see how long this partnership lasts. My guess is it’ll end bloody for someone. Jeers doesn’t seem like a “I’m okay sharing power” type of dude.

Still to be determined is the fate of the Q’Reshie brother and sister who, it appears, have something of a strained relationship. I smell ransom, fear, loathing and our girl’s continued desire to have D’Avin kill her brother (who she thinks is trying to kill her). Wonder if things have really spiraled so far on Q’Resh as she hinted at? And what might that mean moving ahead?

Still, I doubt we’ve seen the last of those two and it isn’t a stretch to surmise that more deals are to be made. Who and what they are? Well, that’s to be determined, I suppose. Things are a little tense on the Herk Supermax at the moment, which means things could break any number of ways. Stay tuned. 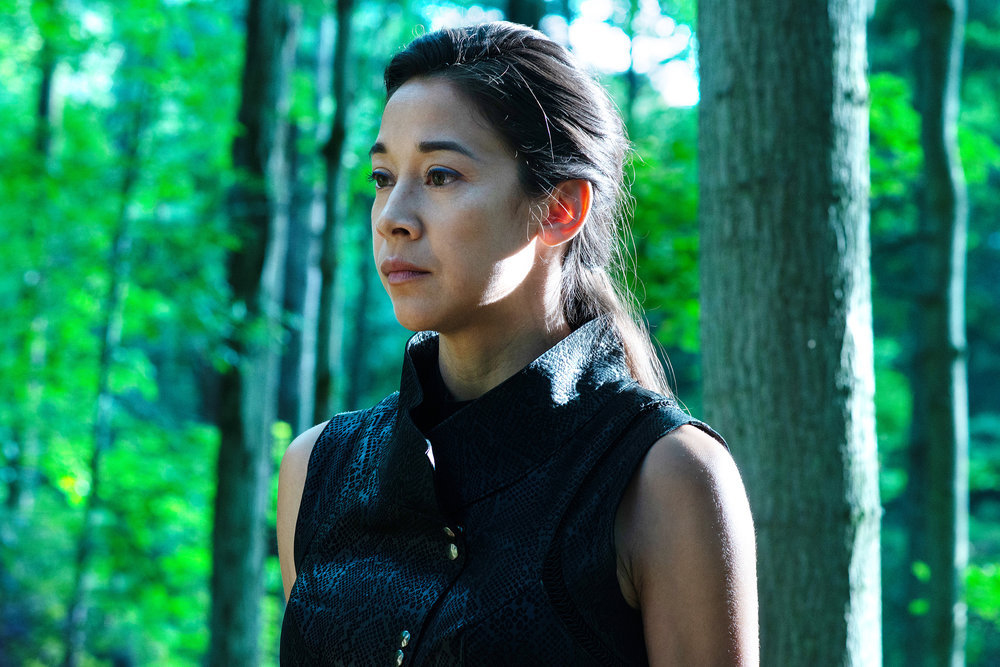 In something of a surprise, The Lady and Khlyen pay a visit to Old Town in search of Pree. They set up shop at the Royale and have some interesting interplay. Again, it’s clear the human body The Lady has infested is having some interesting effects on her as a whole. I thought the scene where Khlyen fixes her a favorite child’s drink and she smiles after she sips it, was telling. Khlyen notices it and once again we are privy to a subtle little moment, a subtle bit of manipulation on Khlyen’s part.

Of course, we then see he’s very much acting in his own interests later as he warns Gared to get out and then meets up with him later with an offer to “save Pree.” Poor Gared, I get the distinct feeling he’s about to get played, and played hard, by a master manipulator in Khlyen. But to what end? Again, is Khlyen friend or foe?

And then, the episode’s biggest reveal – Aneela is not gone after all. Jaq and Delle Seyah are in a forested area looking for “the cube.” Here, we have one of my favorite moments of the episode after Delle Seyeh (Mayko Nguyen, you are lights out) kills a bad guy with an arrow, then gets ready for more. As she’s pulling the arrow out of the guy’s back, she instructs Jaq to “Get behind me, I’m hunting asshole.”

The Delle Seyah-Jaq arc is an interesting one as they still seem to be struggling to find common ground as son and mom. Fortunately, D’Avin drops in during a dream and kind of points Delle Seyah in the right emotional direction. She and Jaq share some nice moments together as they strain the relationship for who they are as a pair. It has been fun to see Delle Seyah grow as a human and mom. It hasn’t been easy and she often lapses back into what she knows, “using your enemy’s loved ones against them? I invented that move, it’s bad bitch 101.” Just golden stuff. 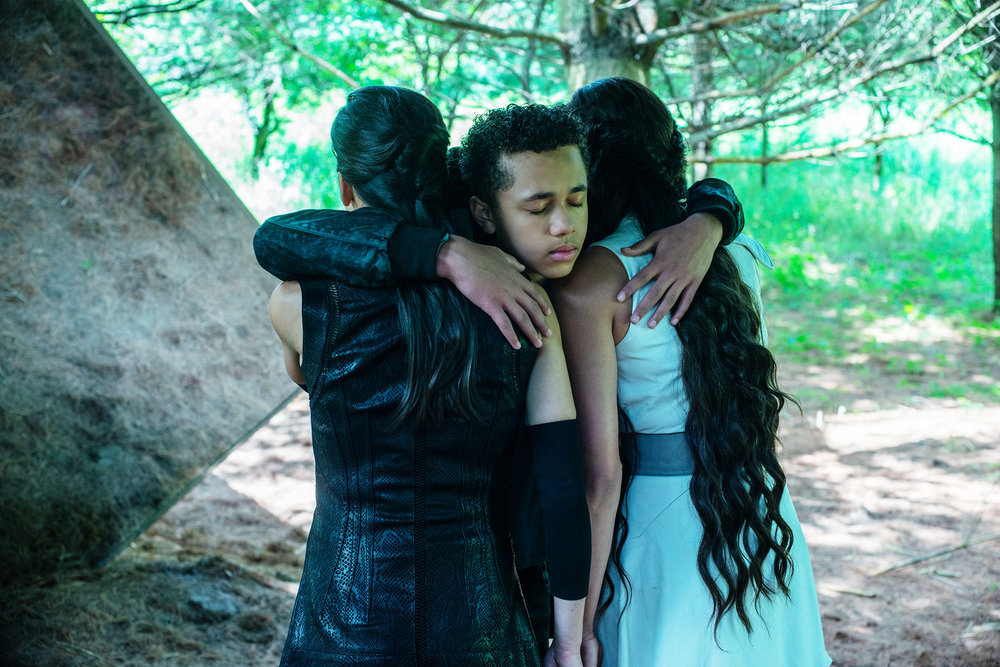 And in the aftermath of some son-mom time, Jaq shows Delle Seyah they have found the Cube. And, with the help of Dutch’s DNA (remember the kiss on the station?), the cube is unlocked and out steps Aneela. It was a great moment and one that drops Delle Seyah to her knees in wonder – literally.

So now we’ve got Aneela back in the game, Jaq with some decisions to make (keep that kid safe), Delle Seyah sporting one delightfully badass archery outfit, and their own unique role to play in this saga. You can feel that these separate groups are all on paths that will eventually intersect when the final roll of the dice are cast. I’m delighted that Aneela is back on the board and look forward to seeing what kind of mischief and mayhem she and Delle Seyah are able to perpetrate on The Lady.

One of the best parts of this episode was seeing Dutch go all kick-assy on folks in the tournament. Now, with Aneela back, we get the opportunity to see Hannah John-Kamen work two characters of such different dimensions. It’s something I’ve enjoyed from the outset and something I think HJK does extremely well.

We are halfway through Killjoys’ final season and you can feel things starting to head toward the the end game. The separate threads are starting to be pulled. What they will create by the end is fun to speculate on. Who will play what role as we get closer to the end should be interesting to see develop. So, let’s enjoy the final episodes of a series that has been a bright light in the sci-fi quadrant.