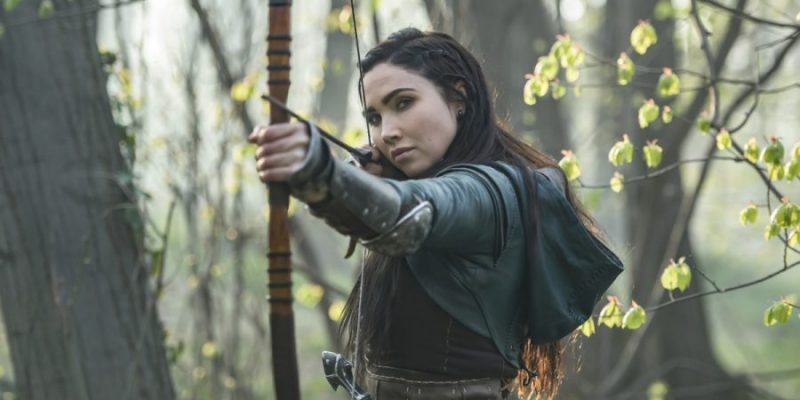 Not exactly the triumphant return we all probably imagined for our beloved Garret Spears, was it? No, not triumphant at all as it turned out. More of a “gasp” type of moment on a lonely stretch of road on the way to who knows where. But that’s been one of the endearing things about “The Outpost” during its two season run – you just never truly know how things are going to work out.

Oh, you have an idea. There’s an inkling, but fortunately the good writers, producer and show runner of the series have tossed in just enough twists and turns to make us all wonder if we really can read this show correctly. Episode 206, “Because She’s Worth It,” delivered unto us, the fandom, some interesting little twists. On some level, this episode felt like it may be a pivotal point in season 2. We’ll see.

But for now, be warned, thar be SPOILERS below. That’s right, off the port quarter, SPOILERS are gathering in the water. So if you haven’t seen the episode, or simply don’t want to be the victim of SPOILER harpoon, turn away now. If you’re good, then we’re good, and it’s all good. So carry one.

So, where to start? Well, let’s go right to the end and work our way back, shall we. Talon and Zed are on a quest to find the stone that will be the key to the talisman she carries when they stop to make camp. And then, in the distance…the sound of hooves, the glint of armor, the chiseled chin…the handsome Garret Spears rides into view. Noble of bearing, tall in the saddle, handsome as an Oregon fall day — a silent assassin. 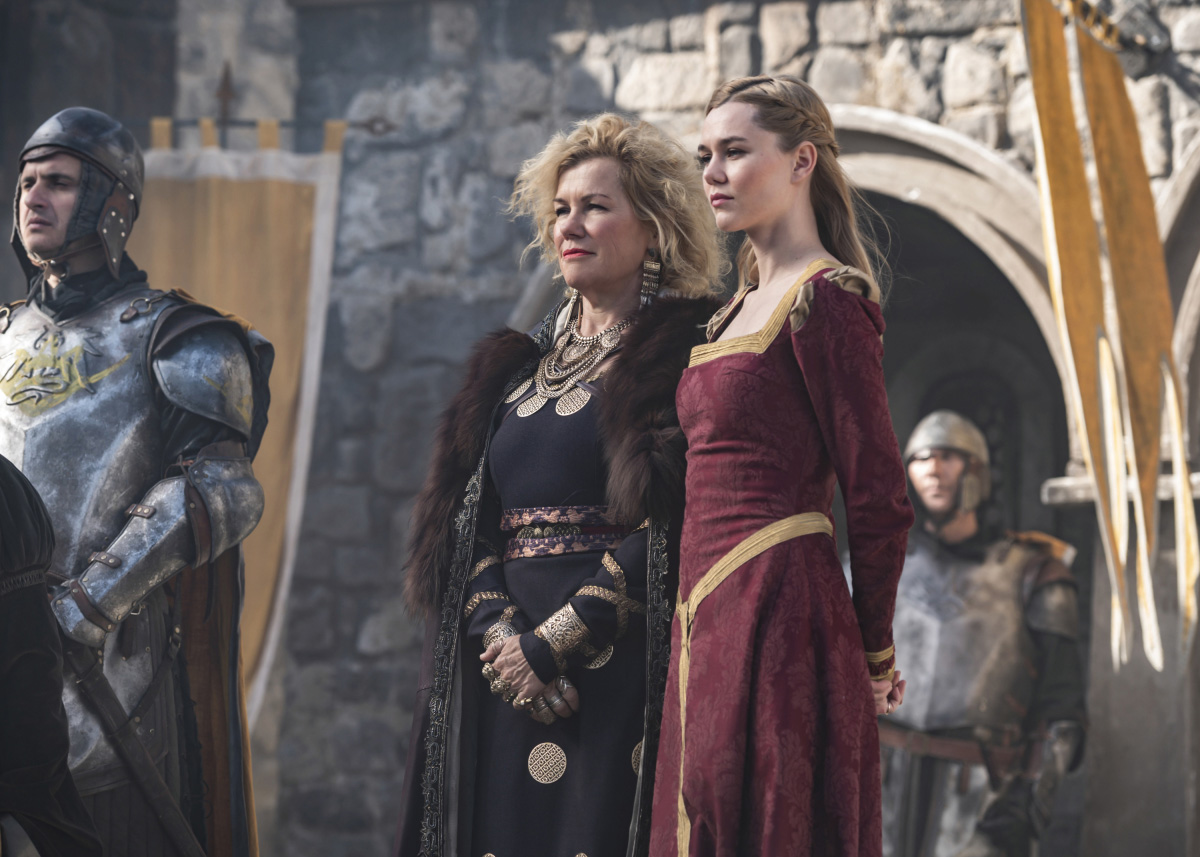 Talon runs into his arms, there is a warm embrace and then…Garret shivs her in the ribs. Just like that, we get our first glimpse of Garret in the episode and he rewards our excitement by killing Talon on that lonely road. Apparently, the conditioning he received from The Healer is still nicely in place. The somewhat vacant glint in his eyes a clue that all is not well in the our captain’s noggin’. And now, Talon is dead. Or is she?

Look, “The Outpost” has already proven that getting a pike through the abdomen is not a certain death sentence. Garret is “living” proof of that, isn’t he? I suspect Talon, who is a treasure trove of untapped gifts, is going to somehow get past this. Is Zed some sort of healer, perhaps? We shall see, but don’t count out Talon even with a knife in the ribs. She’s a resilient one. My real worry is for Garret’s health once Talon recovers. I suspect she will be less understanding, particularly if Garret is still under the influence. And how’s that going to continue, anyway?

Did the healer give him a bota bag (look it up) of the drug to take daily — a little medicine flask, perhaps? Or, is the conditioning truly finished and he’s simply The Healers mindless thrall no longer in need of his “Medicine?” I’m curious to see how that whole scenario plays out. And when he finds out he gutted his own dad? Mmmm, I sense turbulent times ahead for our good captain. And Talon with a grudge? Oh, let the shivering in fear commence. 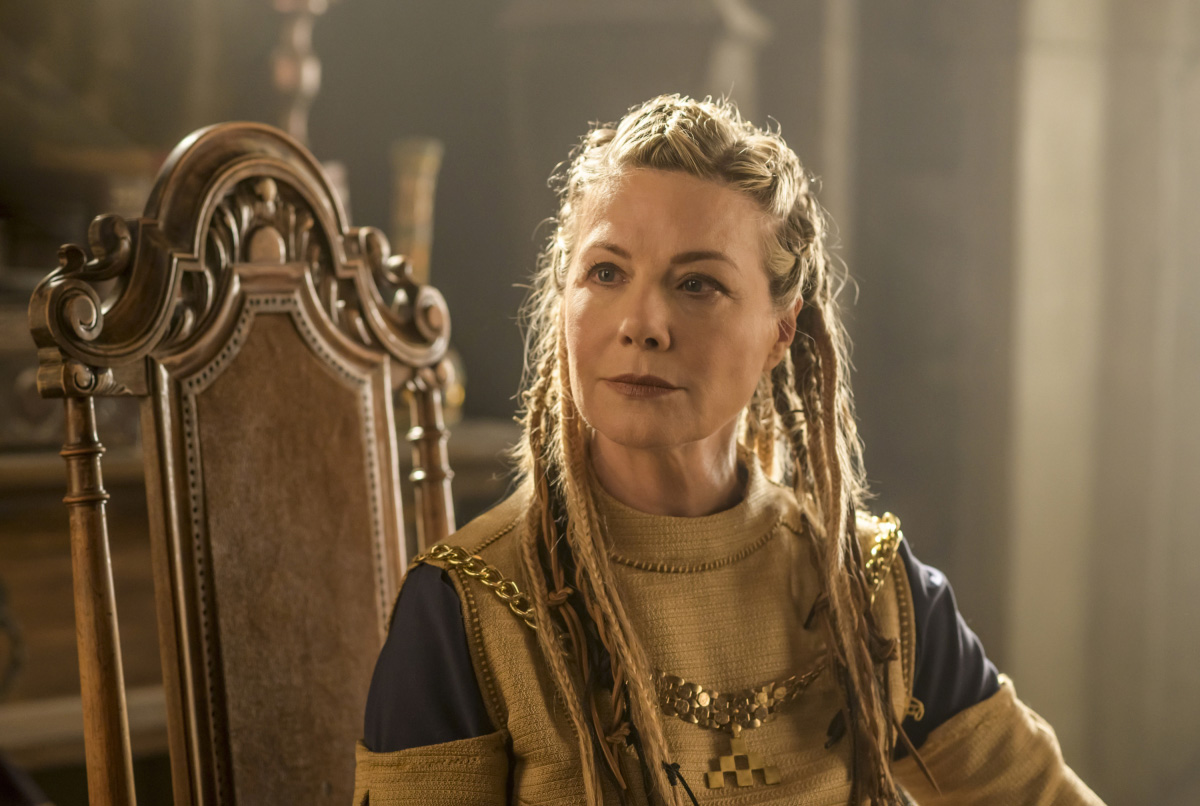 Talon and Zed have an interesting relationship, don’t they? She’s really having some emotional struggles in terms of who she is and where she belongs (Queen Gwynn, what you said!). Zed’s arrival has only amplified that anxiety. She defied the queen with Zed, which forced Gwynn’s hand into the arrest of Zed. In the end, the deal that was struck between the two would send Vicca the Demon back through the portal and free Zed. Sometimes Talon’s obstinance is her worst enemy.

I like her strength, but her desire to find her own answers sometimes puts her at odds with her allies. In this episode, we see that clearly as she even offers a bit of a threat – get my way or we’ll leave the La’Qiri in the woods to kill some more. I wasn’t a fan of that little petulant outburst. But, emotions were high and there are certainly a lot of wheels in motion for both. So, forgive and forget, right? And that’s how we ended up with Zed and Talon on the road looking for the jewel that will complete her amulet.

Zed’s anti-human stance is also getting on my nerves a bit. And, it is clearly starting to wear on Talon’s psyche a bit. Talon’s question of why her mother, who had the power, didn’t bring the Blackbloods home, is an interesting one. That answer should be interesting. Let’s hope she gets to find it. As I’m writing this, she’s bleeding somewhere and Captain Garret Spears is on his way to The Outpost. Trouble is coming. For a Blackblood who comes from a clan that is supposed to be more “tolerant” of the human situation, he doesn’t seem too tolerant to me. Talon and he will certainly have some sorting out to do.

One of the things I really enjoy about this show is the many strong women that permeate it. The dynamic between Elinor and her sister, Gertie, is a fun one. Both are wielding power behind the scenes. Personally, I enjoyed Elinor’s problem-solving skills. See how impressively she dealt with a possible labor strike at the mines? I mean, decisive and direct. And, when negotiations failed, she simply had Munt toss the Foreman up against a Plaugueling for a little sting. And Voila’, the foreman came to his senses. Well, he’s dead now, but labor peace was the goal, right? 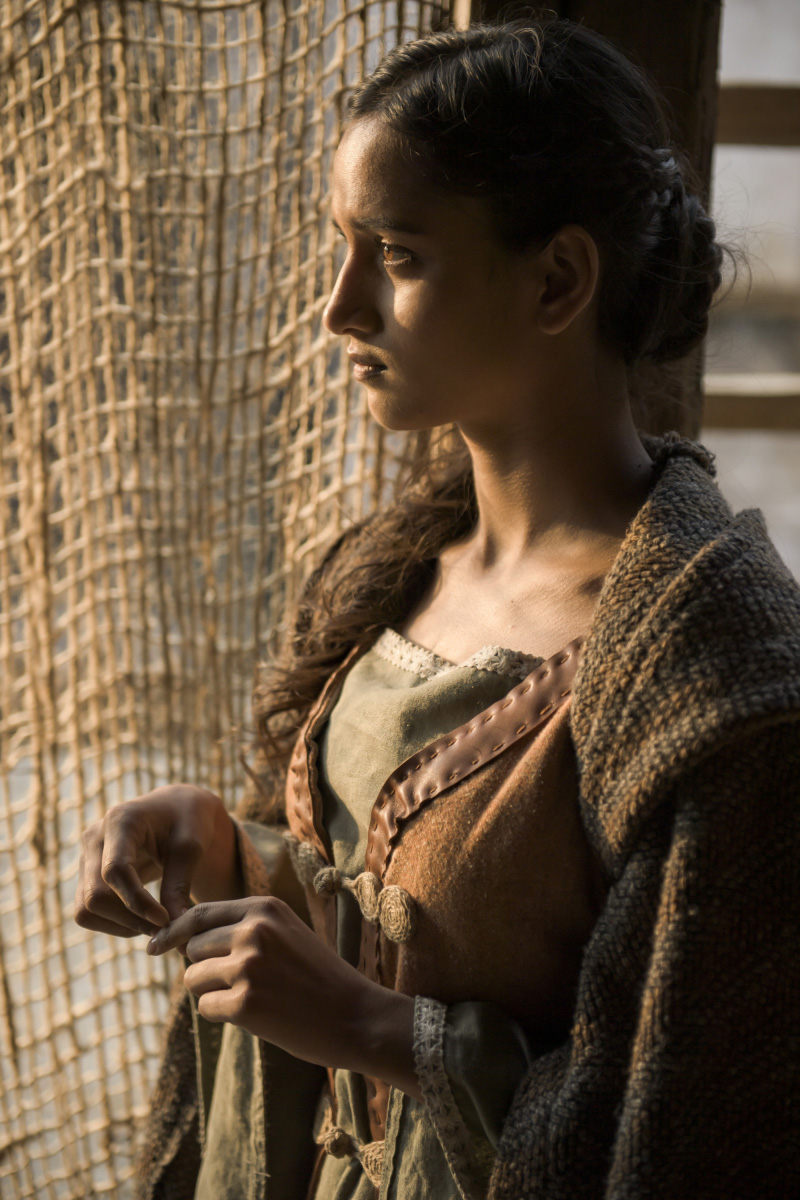 The Mistress is proving to be a formidable force for the queen, as well as offering her some down-to-earth advice. Yes, Gwynn, Tobin is very pleasing to look upon. It’s okay, you can say it (pssst, Garret’s on his way back. Get ready to hold onto your emotions). And while Elinor is proving to be a big addition to the court, Gertie has really made strides with Tobin, hasn’t she? I mean, if you’re asking me if I miss the boozing, the strumpet seducing, the arrogantly boorish behavior, I would tell you — absolutely. That Tobin was a hoot.

However, the new and improved Tobin is proving to be something of a formidable force for in his own right. Gertie drops the bomb on him in this episode when he gets a little petulant about the queen, telling him “Because she’s worth it.” Well said, Gertie. Janzo also offers his thoughts, telling Tobin that Garret had “a good heart and sense of duty,” then adding “good luck finding that.” Ah, it’s thrilling when we see the children grow up, isn’t it? And it’s working, isn’t it?

Dinner with the queen (and no wine? You rascal, you), a little horseback ride, a little opening up of the emotional doors and some backstory, and it was pretty obvious that Gwynn is finding him quite a bit more interesting now that he’s not spilling wine down his shirt and stumbling about. Yes, this new Tobin is going to be quite an interesting addition to the mix. Though I will miss drunken blowhard Tobin, this new iteration should prove to be very effective moving forward. Don’t you get the feeling there’s a showdown of some sort coming? Tobin and Garret, perhaps?

And one of the things we are learning about new and sober Tobin is he’s not the dullard he came off as before. A spilled bit of water, a little observation and Tobin is now on Naya’s trail as the traitor who freed Dred. Indeed, the new Tobin seems to have a very good eye for details, is observant and capable of discerning little clues. I like it. I really do. Again, it makes him more of a force within the walls (and for Gwynn) and that’s going to make things interesting. 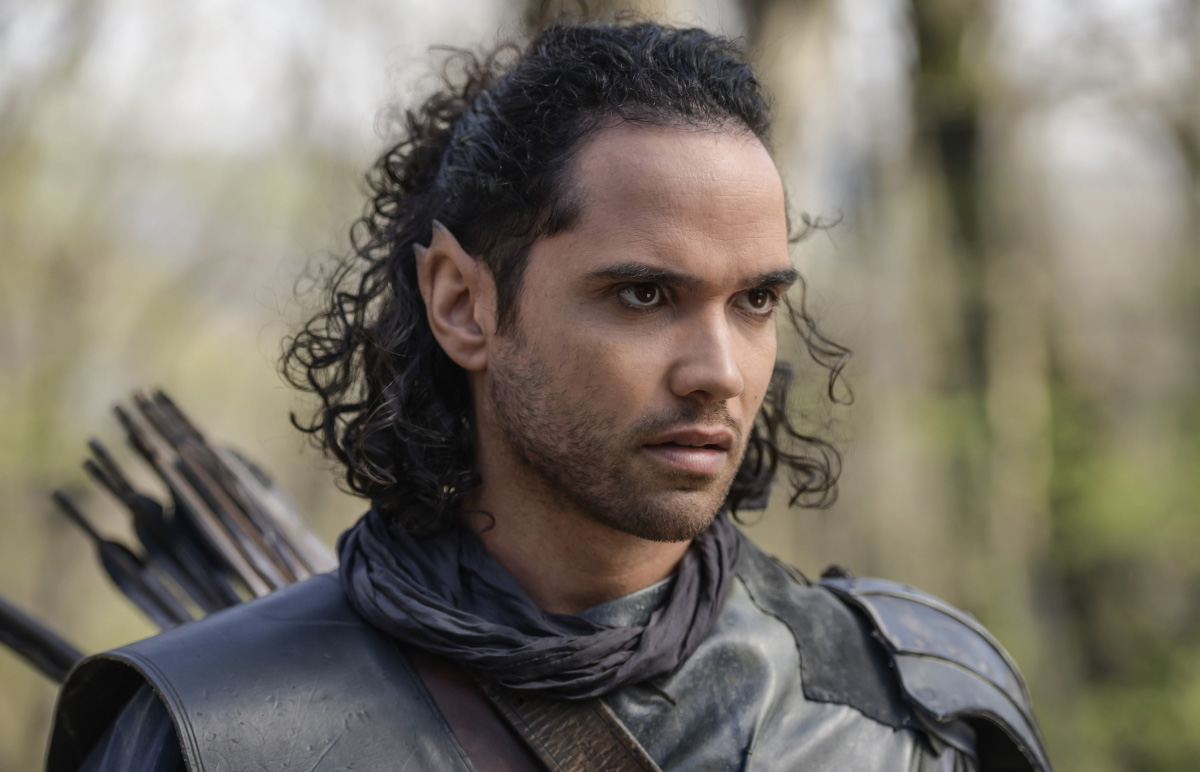 As for Naya, it would seem we are close to the jig being up. As the pressure mounts, she and Janzo would appear to have had their first sweetheart spat. Well, it wasn’t really a spat, was it? Janzo with the flowers and the promise of more kissing, Naya with the denial and some harsh words. It was dreadful. I keep waiting for our lad Janzo to catch a break, but for every step forward in the romance realm, there seems to be a step back. My heart felt a little heavy for the guy. Janzo remains one of the most interesting characters on the show and his growth from season 1 to season 2 has been impressive, but it may all be for naught on the love front if Tobin fully uncovers Naya’s complicity in the Dred incident.

So as Gertie and Elinor plot and scheme to get Tobin and Gwynn together (I’m curios about the cousin. Wonder how that will play out?) to draw more resources to The Outpost, Garret is on the way with more mayhem in his heart. Interesting that everyone is expecting an all-out attack from the Prime Order’s forces, yet The Three have chosen a more subtle, more insidious plan. And Naya’s family members have not been made safe, so the demand for more information makes her even more dangerous, I would imagine.

Again, it felt as thought this episode had a bit of a pivotal feel to it. Things are in place, plans are starting to come together and Garret Spears is on his way to be the ignition to what could be a disastrous fire for The Outpost and its inhabitants. Will Talon heal? Will the mystery cousin and Tobin reconcile? Will Naya be found out? Will Dred’s man-bun still look cool? These answers, and many more, should be forthcoming. Let’s see what happens, shall we?