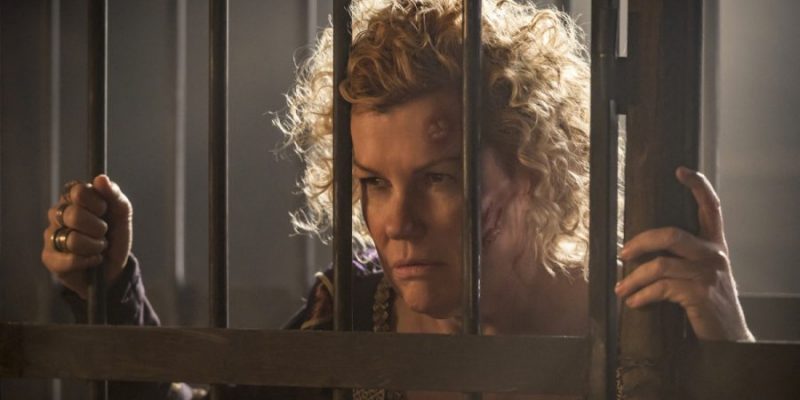 To say there has been something of an “explosive” new development around The Capital would be an understatement. Episode 211 of “The Outpost” finished with something of a bang as it would appear gun powder has found its way into the realm. But that wasn’t all that was new in this episode, titled “Nothing Short of Heroic” was it? No, some very interesting goings-on in this one. And I’m not sure I liked them.

However, remember that there are SPOILERS coming up. So, if you haven’t seen the episode yet, or just have an allergy to SPOILERS, you best remain here. Otherwise, let’s press on shall we.

I was curious to see whether Garret and Talon would meet up on the road after the last episode, then became certain they would when, wounded, she was captured by a Prime Order patrol. And who should come along but the handsome and focused Mr. Spears. Dashing, debonair and quite ready to free our heroine with a wink and smile. Well, perhaps not a smile (Talon was initially dubious about Garret’s change), but he fooled the patrol, freed Talon and there was some nice sword and knife play delivered to that unfortunate patrol. And with it, freedom. 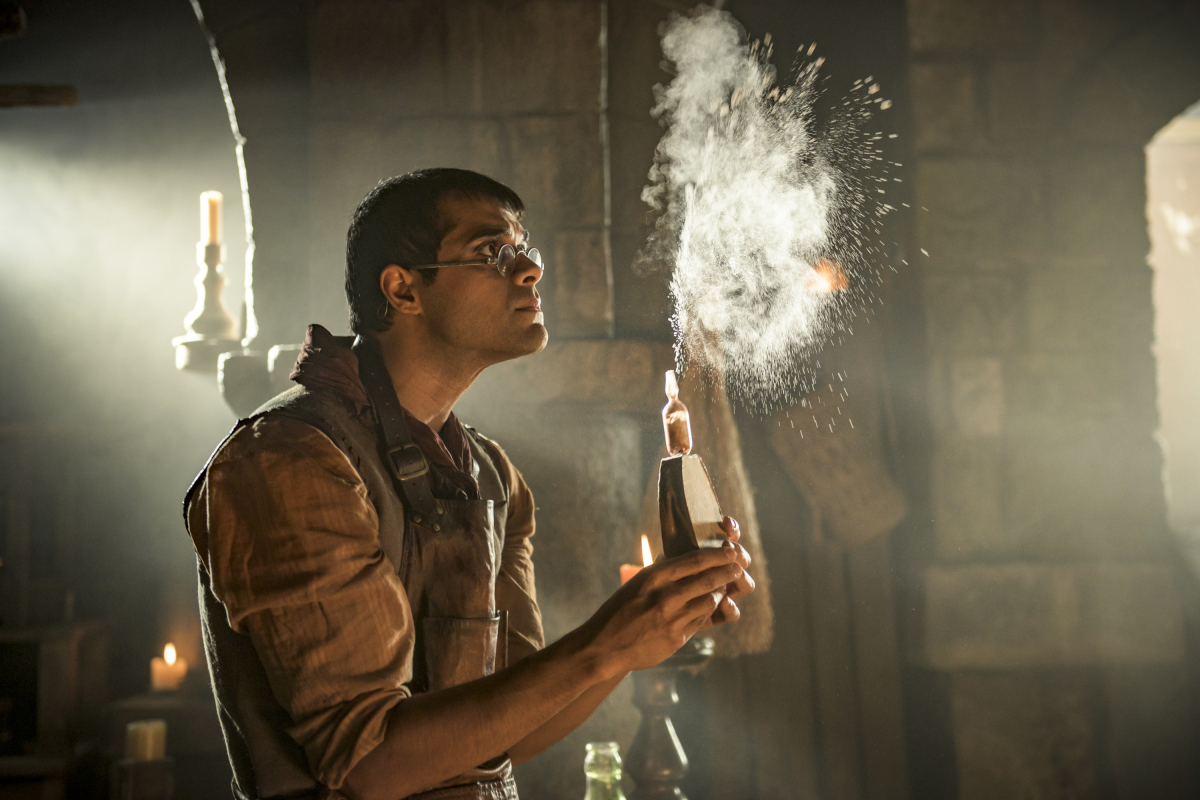 Look, you knew that for all Garret’s passion and commitment to bringing ruin and wreckage on The Three, it was going to take another worthy companion to give that plan any legs at all. It required Talon and now he’s got her and, as we saw, with very little planning in place (Oh, the whole getting married thing was a disaster. You two are terrible liars. Just ghastly), they gained entrance to The Capital. Now the game is afoot, but whereas Garret admitted he didn’t really have a plan, it would appear that our dynamic duo will play it by ear. And that should be fun.

But while Talon and Garret look for opportunities, it appears The Three are weighing an unpleasant option as well. Looks like gun powder has found its way to the proceedings and we got a demonstration of just that at the end of the episode. I’m having a Lord of the Rings flashback (Orc running with torch? I think not). How might this new weapon be used? Perhaps to penetrate The Outpost’s outer walls? Perhaps some other insidious plan is being cooked up by The Three? Good to see The Healer back on the screen, even if it was for her to be reminded that her plan with Garret failed.

That brings up an interesting point. Garret believes that The Three still think him under their influence, at least that’s his vague plan for getting close. Obviously, that is not the case. So, that should be an interesting meeting if and when Garret and The Three come face-to-face. I suspect there’s going to be some unpleasantness along the way, unpleasantness that Garret will not enjoy. Fortunately, Talon could be the wild card. Of course, all this is predicated on The Outpost surviving any attack, any explosive development that may occur. Time is starting to run short. Should be interesting.

Meanwhile, back at The Outpost, a new face has shown up – and I don’t like him one bit. It would appear that Queen Gwynn’s brother has arrived. His story is that he was secreted away before the royal family was killed. Raised in some other part of the realm, he has returned and, if he is her brother, he would have a claim to the throne as the male heir. Can you see the issues starting to develop? Ah, another twist. Curse you, Dean Devlin and your magic writing staff. Another wrinkle in the fabric? Really? 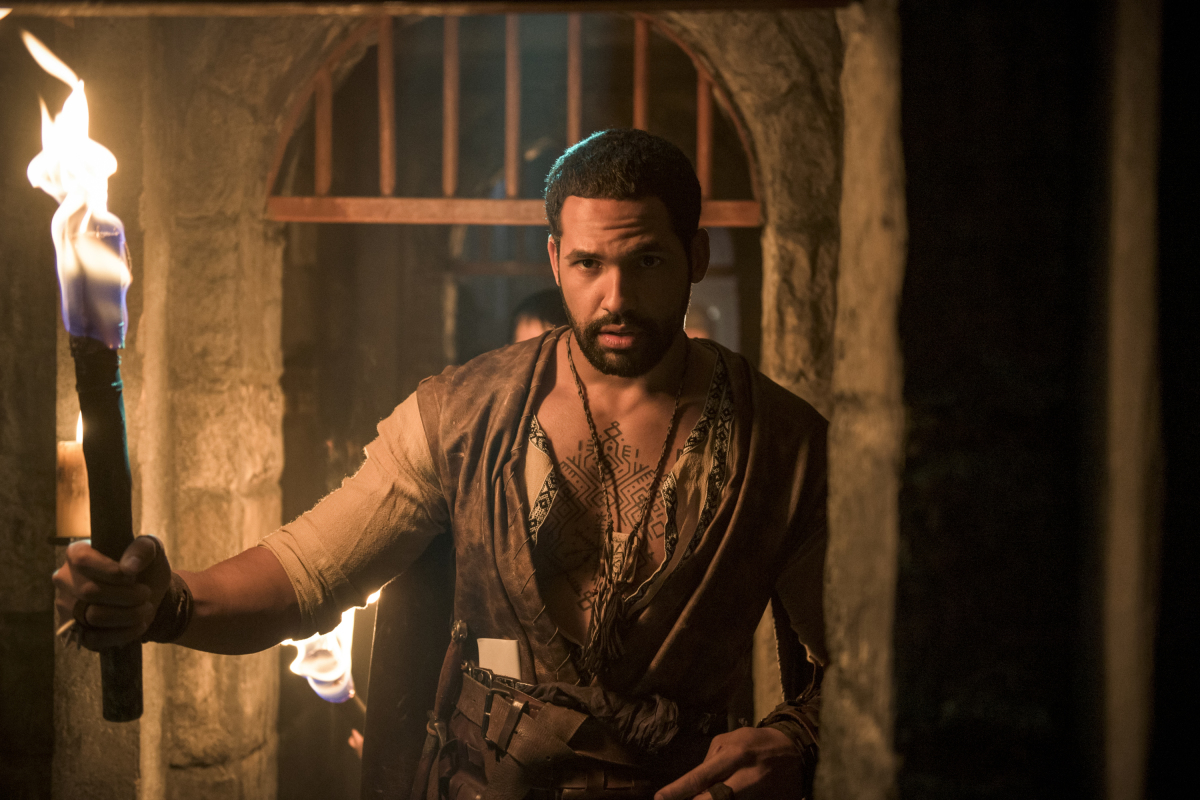 The lad seems sincere enough, and continually passes the tests the queen gives him – you know, questions about growing up, the gardener, pranks they played, that sort of thing. But there’s something about him that makes me go “mmm.” And Tobin isn’t exactly thrilled as he seems to be seeing his kingship slip away should this guy turn out to be real. However, in a nice moment, Tobin admits that his initial aims at lordship have taken a back seat to love.

That’s right,  he is in love with the Queen. Man, Tobin has come a long way, baby. But he’s a good ally, a smart and resourceful guy to have around, and he’s not bad to look at, either. So, he’s essentially the total package now that he’s dried out and can see clearly. And with that, love has blossomed. Kissy face then ensued.

Which makes Alton’s arrival (Hello, James Downie), and potential confirmation as the brother, a bit awkward on many levels. Gwynn knows there will be pretenders to the crown, so it should be interesting to see how she deals with him. Personally, I’d like to deal with him the way Talon did Zed – kick to the curb.

Look, when they were talking to Janzo about his transgressions, I thought Gwynn was going to forgive and forget, but I felt that her potential brother was a snotty, aristocratic, privileged boob with little to redeem him. And it felt as thought Gwynn was swayed by his snotty opinions and was overly harsh with Janzo. I didn’t like that and that little scene convinced me this guy is not the right fit.

I tend to agree with Janzo’s assessment as he left the throne room, in those moments, I don’t recognize the queen anymore. She didn’t demonstrate any of the qualities that Tobin had moments earlier extolled as her virtues. No, this new guy doesn’t feel right. I’m not a fan, but we’ll see what happens here. Please, please catch him in a lie so Tobin can dispatch him. And talk about “nothing short of heroic.” Janzo put himself in harm’s way, though the night-time foray into the woods was, in a word, dumb. However, the ends justified the means and he has broken the plagueling riddle.

Sure, you needed to get stung by these cool-looking bees, but what’s a little pain compared to a vile worm forming in your throat and you turning into a mindless thrall? I mean, really? Take the pain. And Janzo did just that. He’s the man. 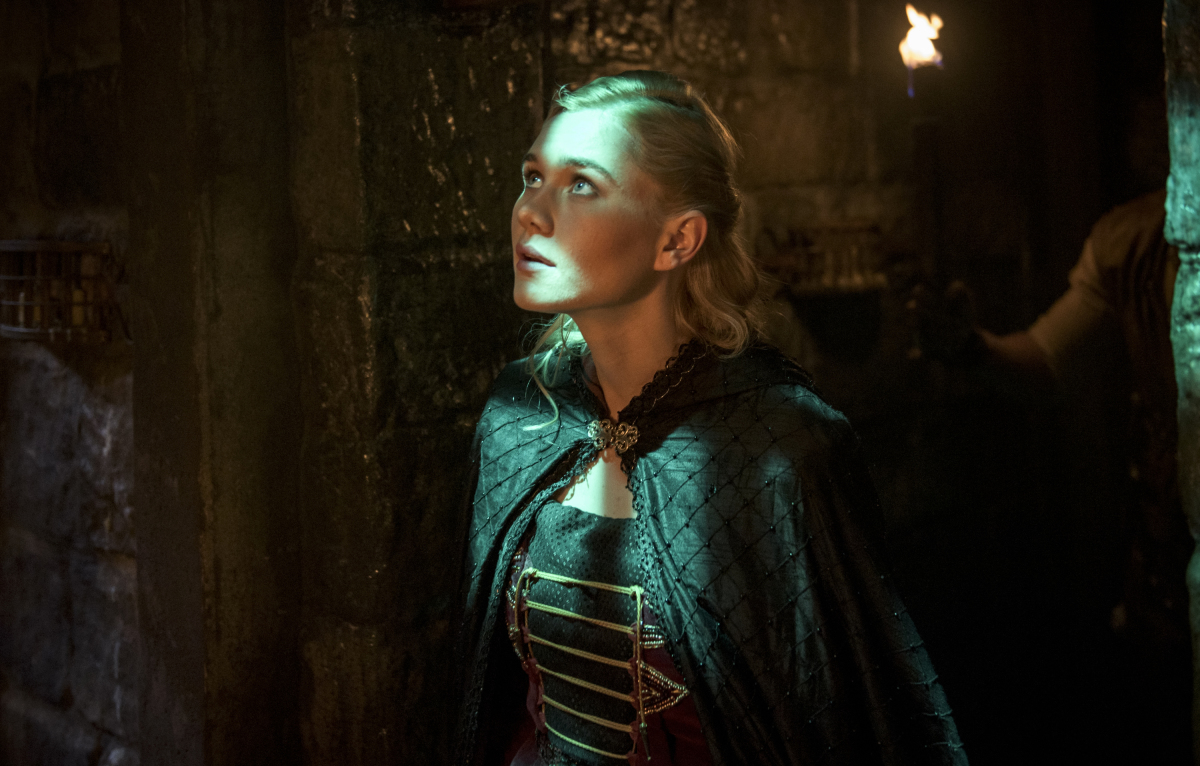 Here’s the weird part of this episode, both The Mistress and Janzo finish the in prison. That’s right, prison. Let’s see, Elinor turned plagueling, Janzo found the cure, but before that he led the queen to Elinor’s kalypsum-making operation, all of which led The Mistress to get sent to the klink for her naughtiness – after Janzo put a bag of bees over her head and cured her plagueling issue.

Your sins have found you out, Mistress, which is too bad because for all your machinations, you have been a wonderful addition to the queen’s court, as well as a savvy business woman. Unfortunately, when you pick the band, you sometimes have to dance to tunes you don’t like. My hope is she exposes this pretended brother gambit and is restored to her place at the queen’s side. It is a dream I have…besides the Tobin gutting him dream.

While the first family of brewing in The Outpost is behind bars, it’s important to understand they are there for very dissimilar reasons. Janzo has spent his entire time trying to do the honorable and right thing, whereas The Mistress likes to do her backstrokes in the pool of shady business deals and opportunity. Still, full marks for her time as counselor to the queen – she still couldn’t leave that life behind.

Though we shouldn’t forget that it was The Mistress filling the queen’s coffers with coin when she needed it most. Yes, Janzo is the precise and mentally-talented artist while his “mother” likes to pain outside the lines. And now, bars are their vista. I’m a little down about it, but feel pretty strongly we haven’t seen the last of their unique talents. I felt they’d also had a “moment” there at one point, but in the end Janzo told her she wouldn’t change and her snotty demeanor in the cell sort of proved that. It’s not Janzo’s fault, mom. Sheesh.

And what of Naya? She found a way out of The Capital, but witnessed the explosion. What part will she play. Will she help Talon and Garret or be of service to Janzo and the Queen at The Outpost. Does she return the favor and bust Janzo (and mom) out of the big house? Wouldn’t that be a fun little twist of a twist? Feels like there’s a lot going on right now with some of the threads we thought were being put in place actually being pulled apart. Very interesting stuff, indeed.