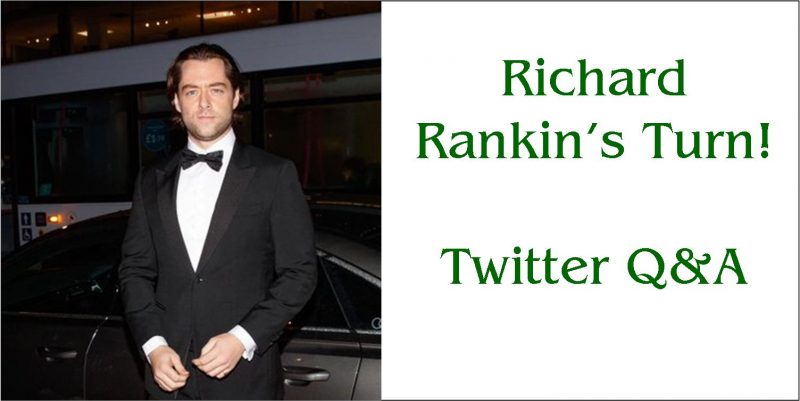 My typing fingers are getting a workout! Here’s Richard’s S5 wrap up Q&A!

Q What’s your favorite novel? What book are you reading right  now? (Do you even have time to read?)
A One of my favourite novels of all time is probably Lord of the Rings. At the moment I’m reading a book called Attached, which is about attachment theory, and Dare to Lead by Brene Brown. Take from that what you will!

Q Any funny/interesting tidbits you can share about the scenes you filmed together for S5?
A This season was the first time I really got to work with Sam as our characters have been very much apart, previously. I can tell you that it was a heck of a lot of fun; he’s quite a darling and there’s a lot of really great stuff between those characters coming up!

Q Book fans know Roger tries to find his place in the family and adapt to life on the Ridge this season; so from the actor point of view what was your favorite of the new skills Roger learns in S5?
A I think this is a really interesting part of Roger’s story this season, trying to fit in to life in the 18th century. Many a new skill had to be adopted over the course of the season. He may, or may not, have given a little hand-to-hand combat a go.

Q Richard, you sing and play guitar so if you could form an Outlander band who would be the backup singers? We know David Berry’s amazing, but who else?
A Y’know, Caitriona is always crooning on set! Won’t ‘admit to having a nice voice – I disagree. Sophie carries a great tune and I’d throw Sam in there just for his face. He has as nice face.
A (Steven Cree) Yeah just ignore the one cast member who’s done a musical in the west end of London Town!
A (Richard) Aye, I thought you’d be up front mate. Or on air guitar.
A (Caitriona) Sorry. Who is this?
A (Steven) Brutal.
A (Maria Doyle Kennedy) Ahem… *coughs surrepititiously but loud enough to be heard*
A (Kyle Rees) Any room for a welsh tenor in there…. jeeeezzz. Ballsed this one up Rankin!
A (Steven) And how could you forget Maria?????
A (Richard) Maria is the lead!! I’m not doing another Q&A. I’m done.
A (Lauren Lyle) I am crestfallen to be forgotten but you’ve really ruined lives here forgetting Maria.
A (Lauren) That life being your own. 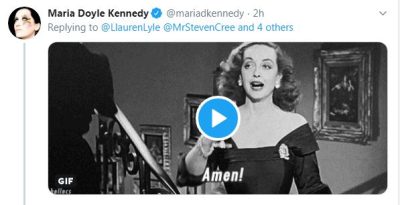 A (Outlander) Let’s just put it all on the table and make Season 6 a musical already.

Q Some of the best Twitter discussions we’ve had in the RR fandom is about Old Roger – how Roger Mac would act now, living here in the 21st century at age 79! What would his favorite TV show be? Maybe the Great British Bake-Off or The Crimson Field?
A Good question! Well, he’s a historian so I think he’d enjoy a good period drama. He’d probably have a bit of a thing for Mary Berry, right? And The Crimson Field is a good shout – he’d be looking on in admiration at that Cpt. Thomas Gillan fellow.

Q Looking back, what life advice would you give your 12 year old self?
A “Richard, when you’re 15 – take your brother’s advice and go to the doctor’s about the abscess in your face. Don’t instead go and play golf. It won’t end well.”
A (Sarah Phelps, writer on Crimson Fields) Plz tell me about your facial abscess I am aroused.
A (Richard) Haha! I was just a little sick in my mouth.

Q Apart from Outlander of course, what is a show that you’ve binge watched and what do you enjoy doing with your downtime (if you have any)?
A I binge watch almost every show I start these days. Doesn’t everyone? Most recently though, I got through Succession in about a day and a half.

Q What’s the best piece of direction you’ve gotten in your career that you still use today?
A Probably from Iain Davidson (@SnideRogue) who once told me “do less. You’re ruining their show” or something to that effect. Or from one of my drama teachers Steve Dolan who once told me NOT to improvise Shakespeare. Ever. Again. Sage advice.
A (Iain Davidson) It was that or “when the camera isn’t on you, treat it as practice for when it is on you.”

Q Have your characters enriched you personally during these years?
A Sure! I take Roger with me everywhere. He’s a Goodyin. Very funny; handsome and smart too!

Q Approximately how many photos do you think you’ve taken during the filming of Season 5?
A I’ve taken approximately 4,618 photos on set this season. Which is about 25 less than Lauren Lyle.

Q Roger has a very dramatic character arc in the 5th book; without giving spoilers, what can you say about performing his challenging journey in the upcoming season? Any good tidbits you can give Roger fans to tide us over til the Droughtlander is over?
A It was a tough season but a great arc for Roger’s story. There were a lot of challenges throughout the year and some of the toughest stuff – which I honestly wasn’t sure how I was going to play – has been the most rewarding.

Good question. If any of them apply – it’s Pride and a touch of Wrath – as we may see flickers of. He has values, many of them very traditional ones which evolve and change over the course of his story. Whether or not he would admit it, his Pride often leads to conflict. #Askme https://t.co/jobKmWrB4J

Q How did you play a young lad so convincingly?
A Yes, this is actually me. Well spotted. It’s testament to an extraordinary makeup team and some pretty out there acting skillz. 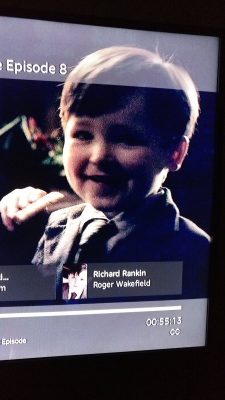 Q It’s Roger and Bree’s first Christmas on the Ridge and 73  years before Dickens writes “A Christmas Carol.” What will Roger wrap up and put under the tree for Brianna?
A Wooly socks.

This is pretty much exactly what I’ve got you!!! Just not as needy #woolysocks https://t.co/v7U3SFHFmr

Q What’s your favorite band?
A At the moment… probably @CHVRCHES. Got a bit of a thing for Iain A Cook, if I’m honest.

Q What is something you admire about Roger? Flip side… anything that irritates you about him?
A I admire the man’s determination and tenacity.His honesty and integrity. He drools in his sleep but…

Q (Kyle Rees) Richard, who’s your favourite Welsh actor you’ve ever worked with?
A Probably @aneurinBarnard mate.Thanks for the question.

Q (Ricky Whittle) Would you rather be big spoon or little spoon next time we catch up.
A You know fine well I like to turn over periodically. Much like a sausage in a grill.

Looking for that perfect Outlander gift? Check out our Gift Guide!