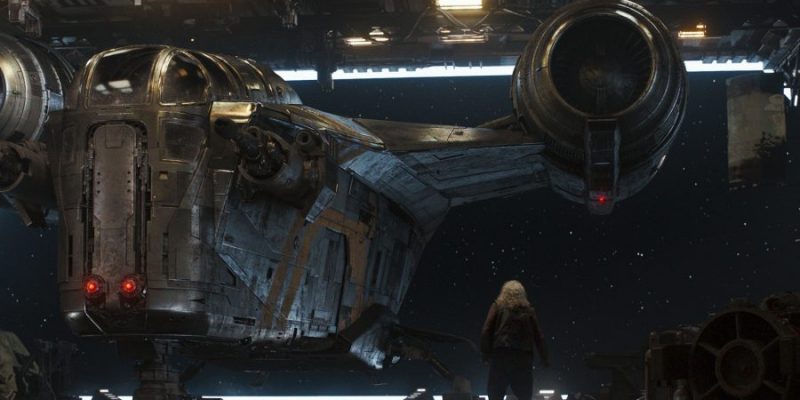 There you go. Mando got a chance to make some new friends, and see some old ones, in episode 106 of The Mandalorian. Titled, “The Prisoner,” this episode was aptly named as the game was to rescue a prisoner on a prison ship. Of course, as with much of The Mandalorian, the initial story isn’t quite the whole truth, was it?

Let’s talk about episode 6. However, if you haven’t seen it, be forewarned, there are SPOILERS ahead. So, is you’re worried about SPOILERS, don’t continue. If you’re good, let’s talk about this episode. There was a lot going on and some nice interplay with new friends and old – and some expected doublecrosses, which was fun.

Mando and Baby Yoda are still on the run. In the midst of their flight, he reaches out to an old friend, Ranzar Malk. The two have a history, pulling jobs together back in the good old days. Ran wants Mando to join a small group that is going to rescue a colleague. The initial story is that this guy has fallen afoul of one of Ran’s competitors, but as the story unfolds, we find that he’s been arrested and is on a heavily fortified prison ship (New Republic prison ship). It’s just one of the little twists in this tale as it moves along, but it gives you a sense that not all is as it seems from the very start. 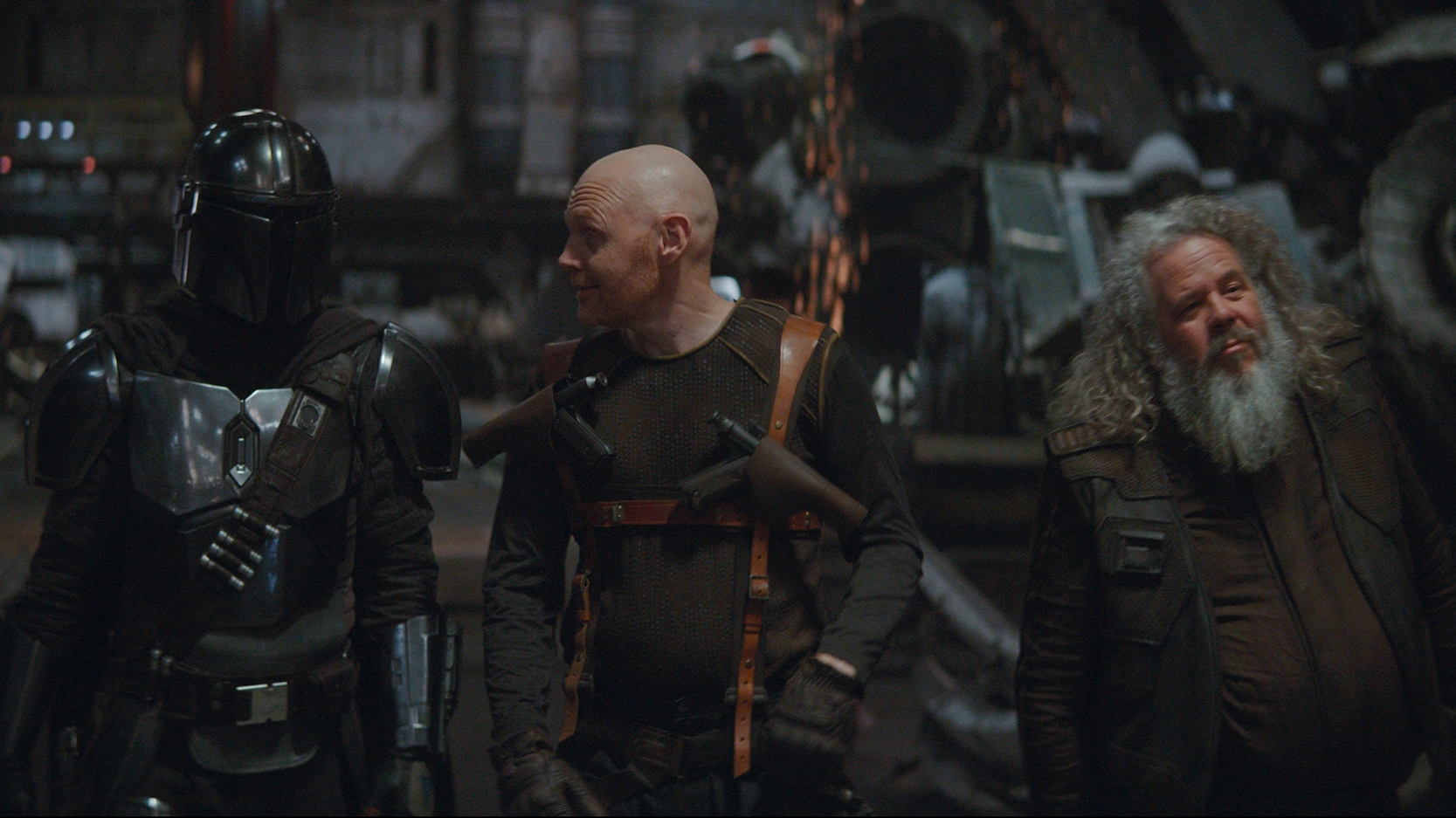 I liked that little hint early on. It sort of set the tone, so I was waiting for the multiple other shoes to drop. And they do. So, the players are: Mayfeld (Bill Burr), Ran’s right-hand man and leader of the mission; Burg (Clancy Brown) who is the muscle; a droid named Zero (Richard Ayoade); and Xi’an (Natalia Tena), who also has some murky history with Mando. She’s also a particular kind of nutso killer. That’s the team and they set off for the mission with several layers of distrust.

Two things then happen on the shop. The first is that Zero, who will pilot, runs across an old message from Greef Carga about the “cargo” and return of it. That plants the seed that we know is going to grow as this thing goes. The second is that Burg, who seems to be a restless type, opens a closed door that reveals Baby Yoda. Right there, I’m thinking this mission is going to be more than Mando bargained for – no matter the promised price.

This episode is interesting in that there’s more dialogue than we normally have. It’s also a little longer than some of the others, which was just fine with me. I thought this was a delightful episode, even though you could start to piece together some of the issues that would arise from early on. We get a Gungan reference from Mayfeld that made me chuckle. Mayfeld has an interesting personality and offers some funny lines along the way. The humor in The Mandalorian isn’t in your face, it’s more quick-hitting and subtle. It’s there, however. 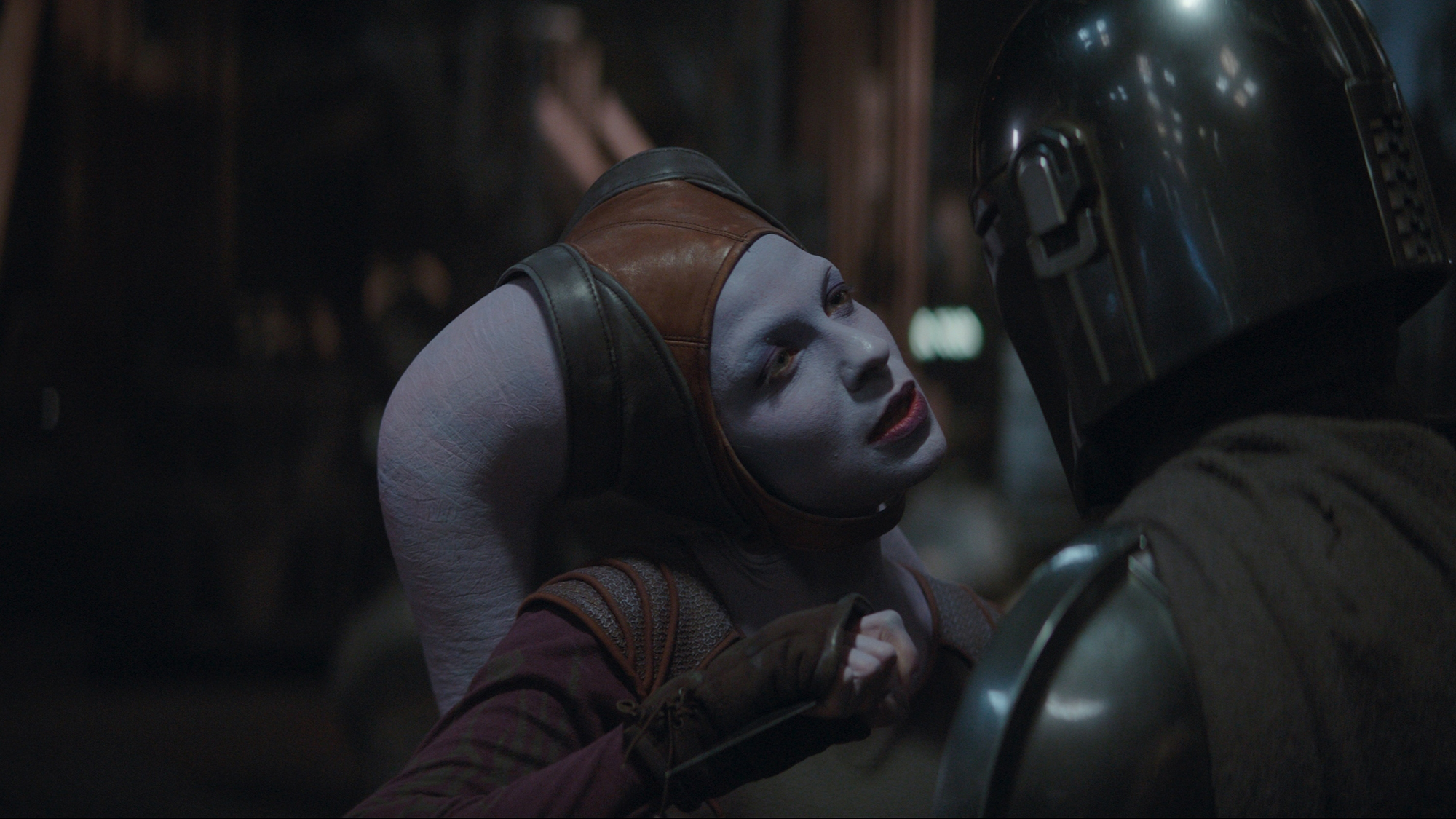 The crew finds the ship, disables it’s ability to detect them and the search for the prisoner commences. Along the way Burg demonstrates his lack of subtlety and quiet when h shoots a droid, bringing the guard droids down on them. Fortunately, it’s an opportunity for Mando to demonstrate his own warrior vibe, as well as the strength of the Beskar armor. He downs, one, two, three….hell, a bunch of droids single-handedly. It’s an impressive display of fighting ability, one that I think rattles the buys, though Xi’an likely knows all about that.

Turns out, they get to the control room, Xi’an does something unpleasant, and they discover that a rescue beacon has been activated so they now have a time limit. Turns out they are there to rescue Qin, the brother of Xi’an. This is when things get really fun. The first major double cross occurs when Burg gets the drop on Mando and tosses him into Qin’s old cell and they all take off. Meanwhile. Zero has put two and two together and begins hunting Baby Yoda on the ship.

So what we end up having here is a game of cat-and-mouse aboard the prison ship and the Razorcrest. Zero is after Baby Yoda, who is hiding nicely, and Mando goes after his betrayers. Mando soon escapes the cell with the help of a droid arm, then starts closing off exits in the ship, forcing the four baddies to begin to hunt for him. There’s a nice bit of cutting back and forth between the ships as the hunt begins as the tension rachets up. Mando is separating his adversaries bit by bit aboard the ship, then takes them out. Zero is struggling to find the cute bundle of green aboard the other ship. 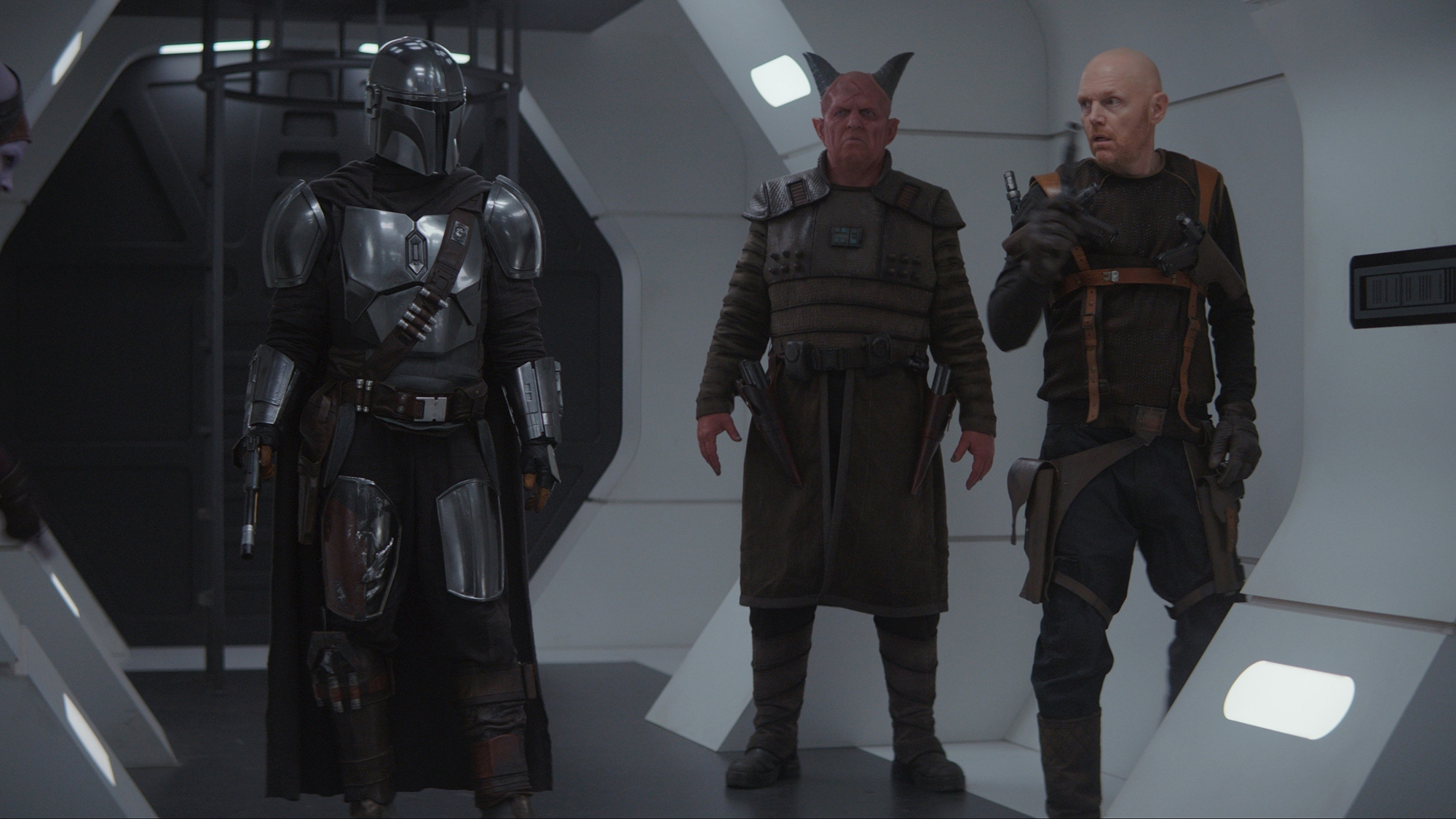 Meanwhile a New Republic patrol is coming on fast to see what the distress signal is all about. It’s good fun as we see the Mandalorian at his stealthy best. Perhaps the most fun was when Burg and Mando threw down in the control room. Mando spent most of this scene getting his butt kicked before finally vanquishing the brute. So, one by one, Mando takes down the people who had betrayed him, including Xi’an.

It was a nice little twist there at the end, I’d assumed he’d killed Mayfeld and Burg (crushed in the doors), but let Xi’an live. And of course he captured Qin to take back. But as we find out later, he tossed the first three into a prison cell aboard the prison ship, and had taken Qin back to collect his pay. But that was later. After finishing up with his four friends, Mando makes a fortuitous appearance back on the ship just as Zero finds Baby Yoda and is about to kill it. He puts a blaster round through the droid. What’s interesting here is that is appeared that Baby Yoda was trying to use his Force powers to do something about his imminent doom. Kind of funny moment when Mando blasts Zero from behind and Baby Yoda looks quizzically at his own hand. Cute moment, that. 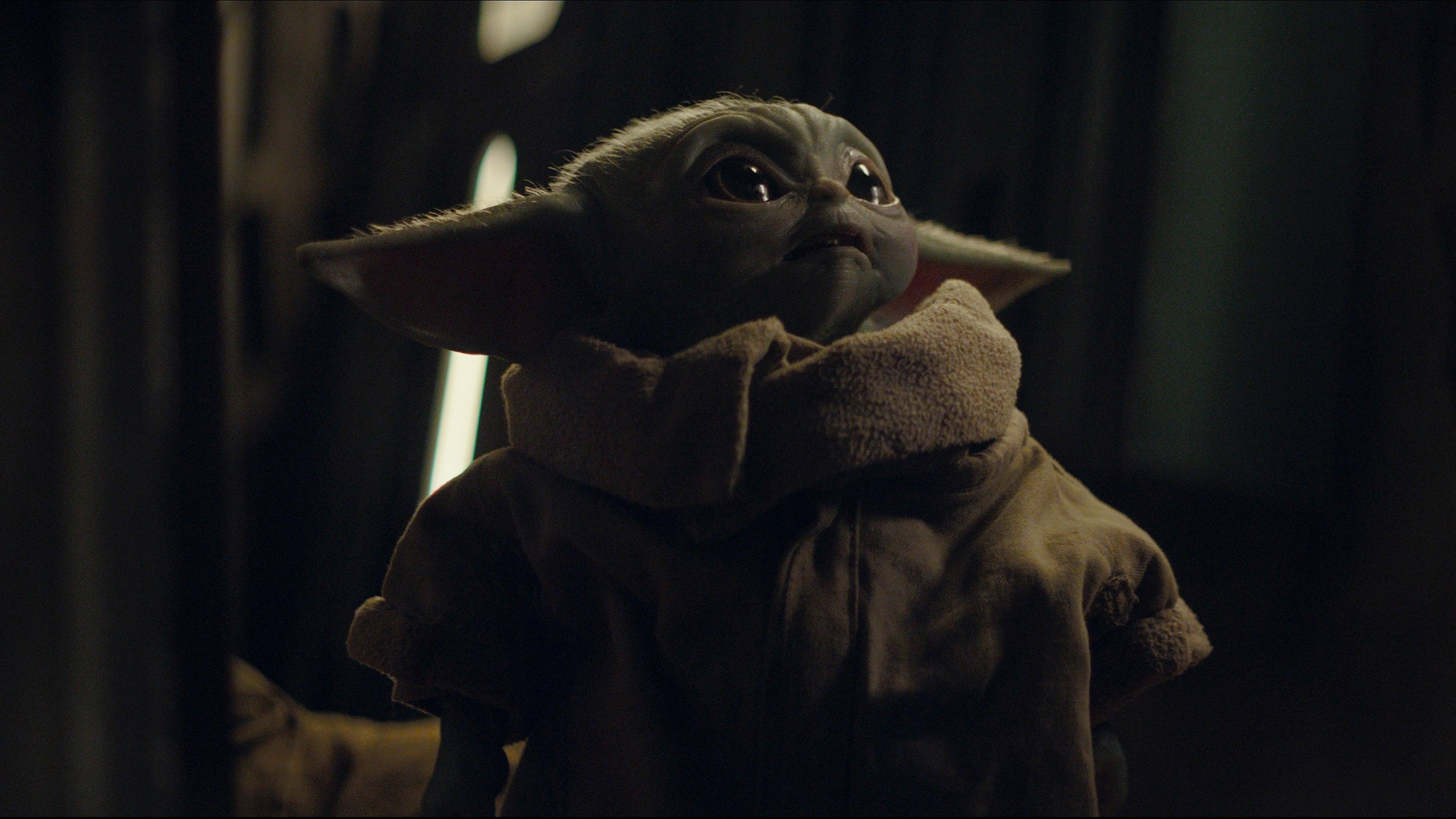 But wait, there’s more double dealing to be done. Mando lands on Ran’s station and collects payment for delivering Qin. Ran, of course, isn’t the straight-shooting kind and as Mando is pulling out of the station, he orders Mando killed. Hey, we could see this coming a mile away as betrayal is becoming a way of life for our hero. Fortunately, he’s knows that, and knows the quality of the people he’s dealing with.

And with that knowledge, he’s actually hidden the distress signal from the ship on Qin’s person, which means that a group of X-wings arrive just as he’s leaving. The X-wings then go about destroying Zan’s station as Mando and Baby Yoda make their perfectly-timed exit. Nice to see the X-wings in action again and I think I recognized one of the pilots. You know, this show offers so many call-backs to the old days that it wouldn’t surprise me if we had a familiar face or two in the X-wing seats.

Overall, I thought a good episode. Yeah, some of what transpired you could see formulating early on, but so much of that type of thing is timing and executing and I think Jon Favreau and director Rick Fumuyiwa pulled off an entertaining episode, with enough twists to make it interesting throughout. It’s interesting to me to see subtle changes that The Mandalorian is undergoing. Killing randomly is something he is entirely turning away from, which I think is interesting. 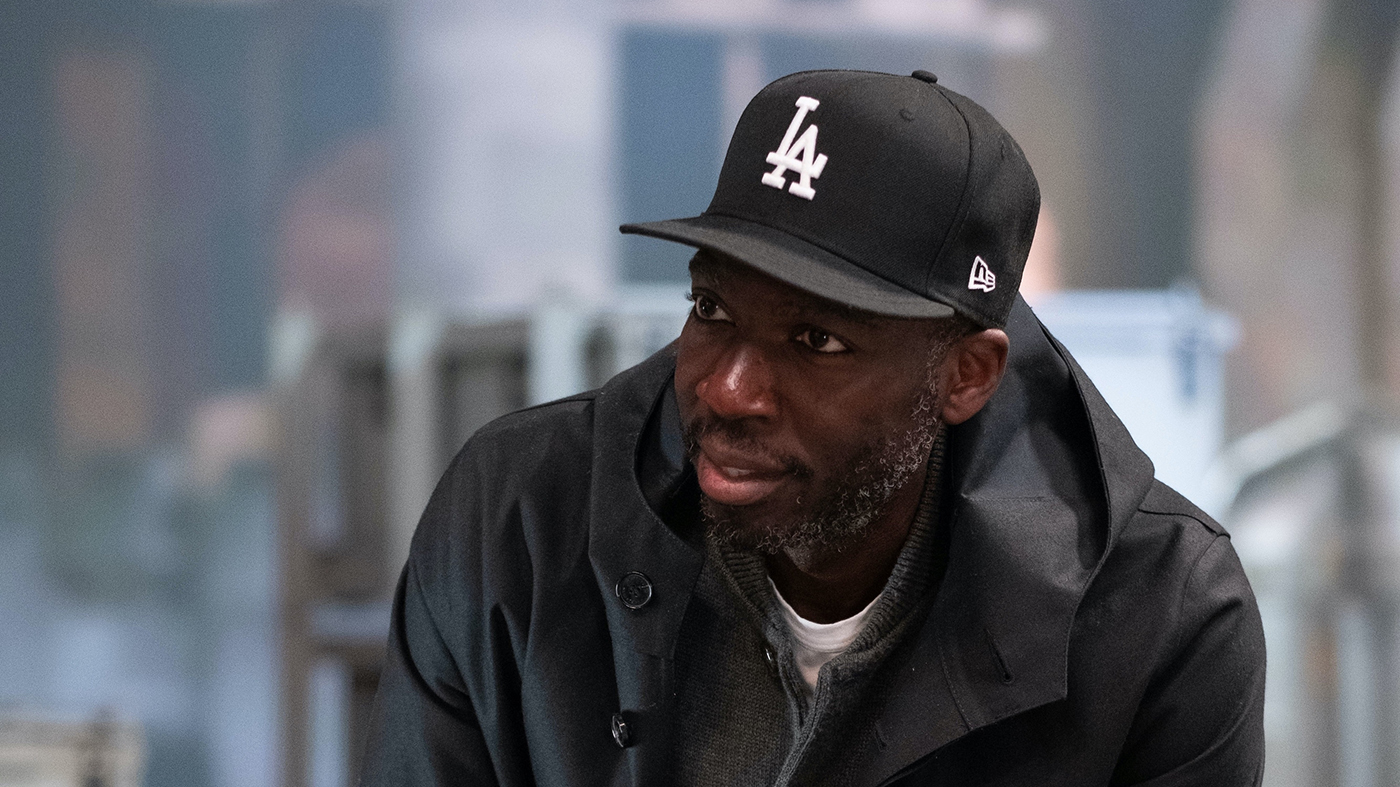 Baby Yoda’s appearance, coupled with his own past as an orphan, have found an interesting resting place within his Beskar. He asks questions he isn’t supposed to and cares when he used to be hardened. It’s a fun metamorphosis our hero is undergoing with his young, green companion.

I just hope he can find someone to trust at some point. Xi’an called him paranoid earlier and if this keeps up, I don’t blame him. People are hunting him and even business associates are no longer to be trusted. The whole concept of “it’s not personal, it’s business” feels lost. Mando has to feel that this business is getting very personal. Six episodes in and I think Disney+ has hit a home run with The Mandalorian. There’s a lot of positive chatter about the show on social media and I find myself anxious for the next episode to drop on Fridays. Well done to all on this one.