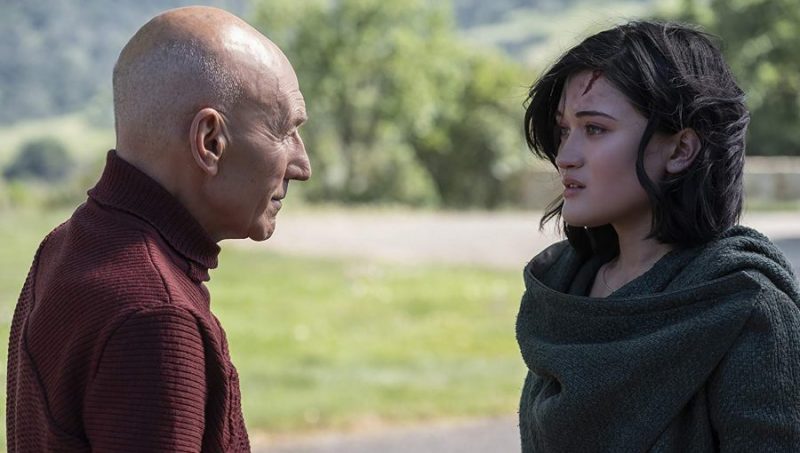 “Sitting here, all these years, nursing my offended dignity. I haven’t been living, I’ve been waiting to die.” In that short span of words, we get an accurate read on what has become of Jean-Luc Picard since his retirement from Star Fleet. It’s a sad, tired, somewhat embittered Picard we meet early on in episode 1 of Star Trek: Picard. The years have slowed the speech, dimmed the fire and left him a somewhat wandering soul on his expansive vineyard. Something is missing.

But that’s just the opening act of a play that gets more compelling throughout the episode. For an opener, I was truly delighted by what I saw – the new faces and places, with call-backs to the past – offering context and potential. I thought Picard episode 1 lived up to the hype very nicely. I enjoyed the heck out of it and immediately went back to watch it a second time. Time and effort were well-spent in the season-opener. I look forward to it building from there.

So be forewarned, there are SPOILERS ahead.

The pace of the episode is a bit slow, but I didn’t find that a distraction. I thought it offered a nice, relaxed background for what was to come. Sometimes episodes don’t need to rush along, they are better off moving at a leisurely pace like a slow-moving stream. Just let it happen in it’s own time. I enjoyed the vibe and pace of this one. Some won’t, but I was good with it.

While Picard (still dialed in nicely by Sir Patrick Stewart) tries to find meaning in a life that he felt was thrust upon him by a Star Fleet that betrayed a promise, we also meet Dahj, a young woman who finds her home invaded, her boyfriend murdered and the intruders wondering why she hadn’t “been activated yet.” It’s a great moment and one that marks Dahj as an immediately interesting person. She “activates” and proceeds to kill her tormentors and suddenly finds herself with skills she had no idea she possessed. 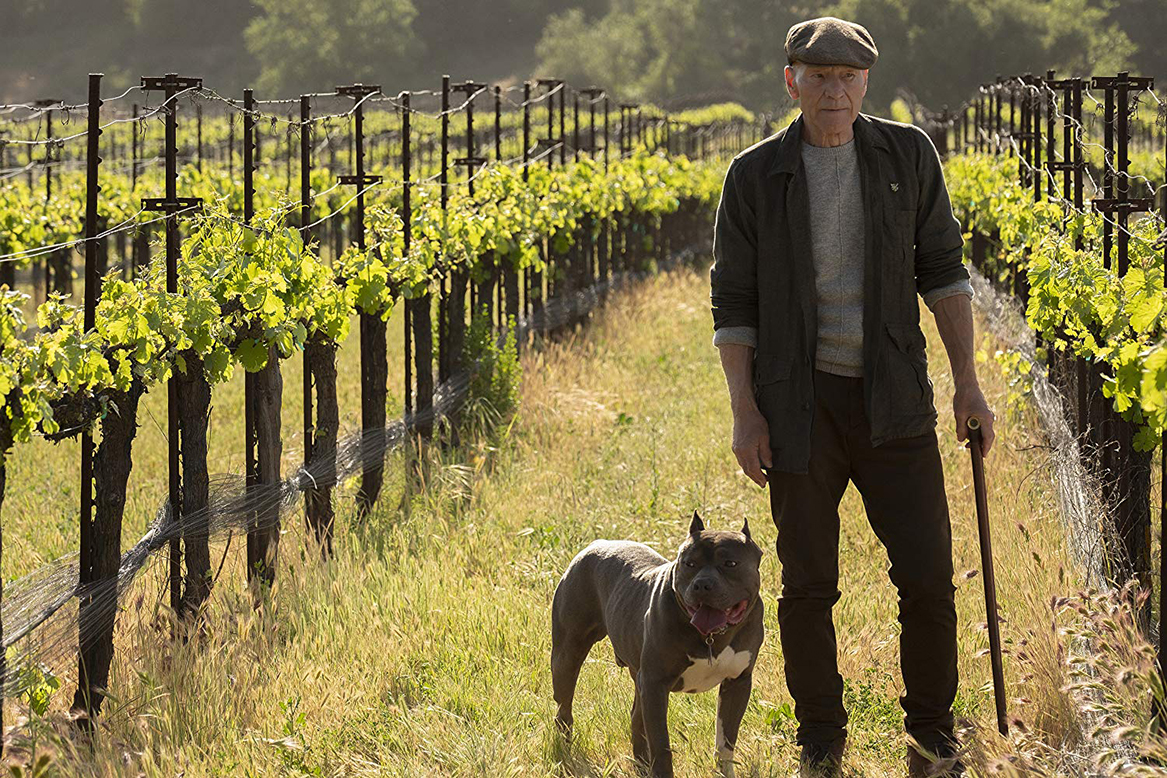 Sir Patrick Stewart as Jean-Luc Picard at his vineyard.

As Picard trudges toward an end he admits he is anxiously awaiting, Dahj runs to the vineyard to find Picard. She doesn’t know how, she just knows the way. It’s an interesting meeting. She recognizes him immediately, but can’t seem to grasp why. His recognition of her is slower, but there’s something that calls to him about Dahj. And with that we are on our way toward what I suspect will be a fun adventure.

For me, a large part of this episode seems to be calling Picard to take care of some unfinished business. Data appears in dreams that offer hints about an event that needs to be taken care of, to be nurtured and saved. In one dream, as Data and Picard play poker, our former admiral admits he doesn’t want “the game to end.” In another, Data is painting a portrait and assures Picard that he knows how to finish the painting. Both moments are little hints about what’s to come throughout the episode.

I enjoyed the first half of this episode because Picard was clearly struggling with the meaning of his own life and his decisions. He misses his friends, his path in the stars and seems to have lost some sense of faith in the world around him. He has slowed down and it’s clear that the years have not necessarily been kind to him emotionally. He moves slowly, talks slowly and seems simply to exist with a weighty intensity upon his shoulders.

On some level, it was a little sad and disturbing to see the former Captain seemingly struggle so. It’s in stark contrast to the vitality and energy he displayed through the TV series and movies. But I think it’s beautifully played and wonderfully layered as we move forward with the episode. So much there. It is fun. 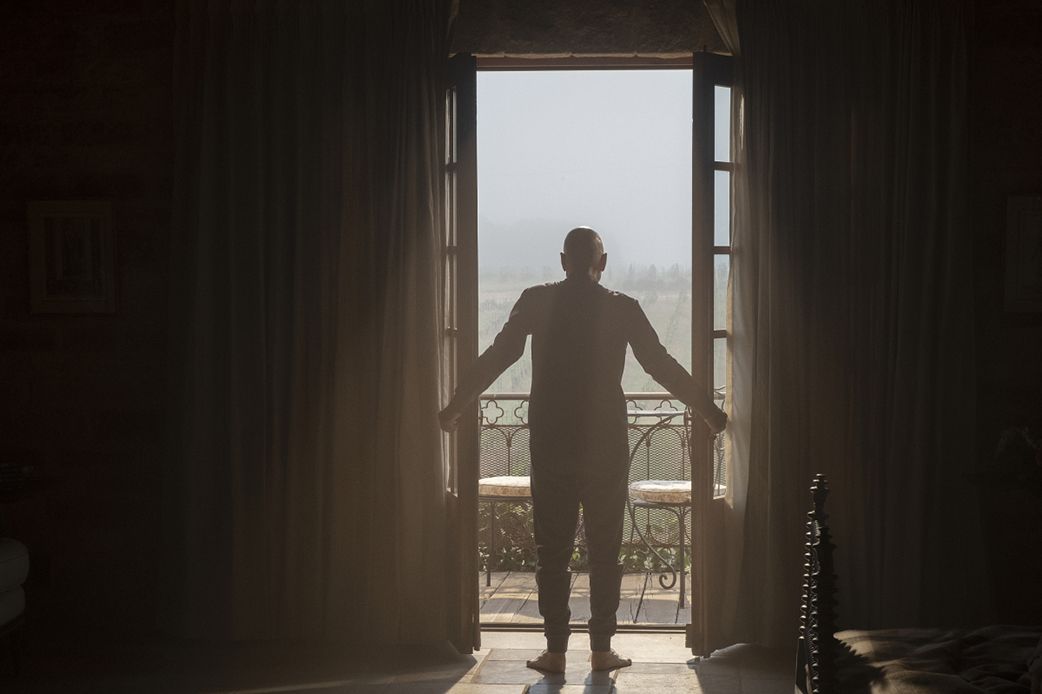 Sir Patrick Stewart as Jean-Luc Picard on Star Trek:Picard on CBS All Access

We also got a nice little backstory element during a television interview at the vineyard. We know that Mars was attacked by rogue synthetics, an attack that killed many and that led to the prohibition of synthetic beings. We also know that Romulus was indeed destroyed by a super nova, leading to an attempted mass evacuation of the Romulans on the planet, something Star Fleet decided to stop, which cost millions of lives. Picard himself has a pair of Romulans working in his household (So good to see Orla Brady again. I loved her in Into the Badlands). They clearly admire and support Picard for who is he and what he had done for them.

We also learn during the interview that the Federation’s pull-back of the evacuation efforts for the Romulans was a fundamental betrayal of Picard’s notion of what Star Fleet should be. In the interview he admits that within the betrayal of their word, Star Fleet stopped being Star Fleet. And that was something he couldn’t stomach, so he left, which has led him to his present situation, “nursing his offended dignity.” It’s an interesting development and one that I enjoyed. I love backstory and it was a moment that moved us to where we are now. Picard is a man haunted by his own past and the past of an organization he so intensely believed in. You begin to see why there’s a weighty feel to him early on.

But there’s something else afoot, right? A wall painting in his home leads Picard to its twin (note that) in a vault. Data had gifted him the two identical paintings 30 years earlier, the latter with a face that is the spitting image of Dahj. It’s an interesting twist that Data gave Picard two duplicate paintings, but it’s also a fun little clue about Dahj and who she is and what may be coming. Dahj is an engaging character and as Picard puts the pieces together, he begins to see that she is, indeed, something special.

Turns out, a scientist in the synthentics program who disappeared when the program was shut down, may just have had enough Data material to create a child, an android child. The painting he gave to Picard was 30 years old, yet there is Dahj’s face on it. And the name of the painting was “daughter.” It’s an interesting twist and one that explains her special capabilities. She’s loathe to accept it, but another brawl with more abductors confirms it – she’s got serious ninja/android skills. And though she dispatches her adversaries, she is also killed. 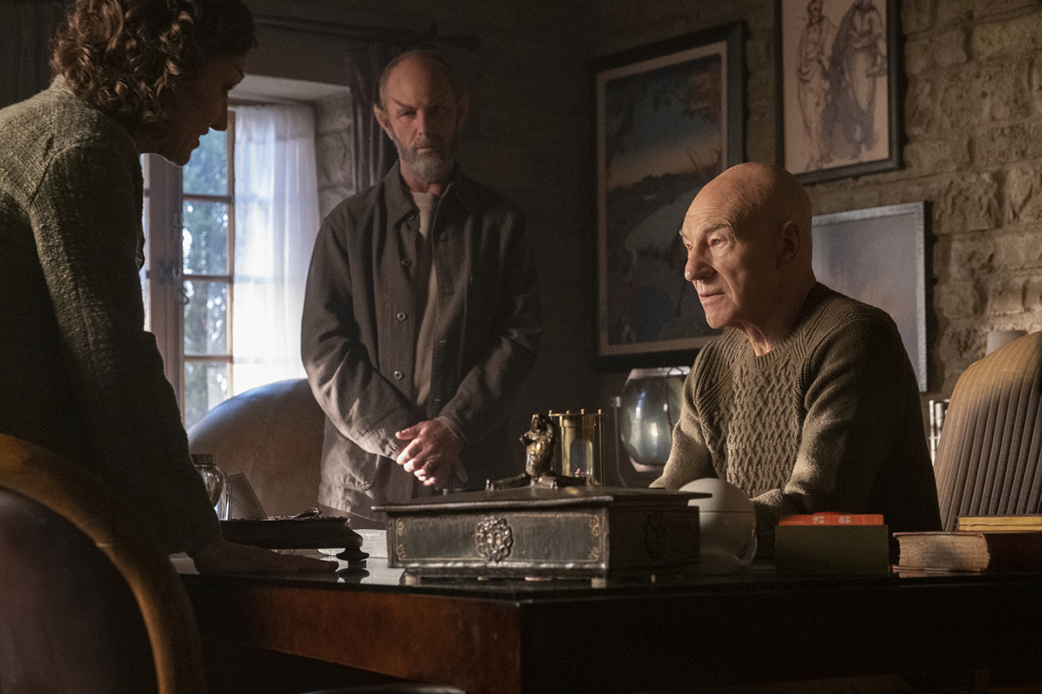 It’s a crushing moment, one that really left me feeling kind of disillusioned. I had looked forward to this character being fleshed out, reigniting the flames of Picard’s space-faring desires with an adventure. And suddenly she was gone.

Fortunately, Picard isn’t quite done with the whole thing. As he recovers post-fracas, he utters the words I began this piece with and determines it’s time to find out what’s going on a why. A visit to the Daystrom Institute in Okinawa, a meeting with Dr. Agnes Jurati (played by the always enjoyable Allison Pill), and the hidden meaning behind a necklace Dahj was wearing provides many answers. Dahj was created out of Data via fractal neuronic cloning – his essence is still alive – and they are always made in pairs (dun dun dunnn). It’s a stunning revelation and I admit I was delighted to discover that the potential to enjoy some more work by Isa Briones was possible.

Moments later, my joy was pumped up another level when we see that twin show up on the Romulan Reclamation Site as Dr. Asher, or Soji. I don’t know if I trust this Narak guy, who pops up to talk about his troubles. Seems like a bit of a spy type to me, so we’ll see. But perhaps the most interesting and, I admit, shocking development about this was not only that Dahj’s twin exists, but that the Romulan Reclamation Site is an old Borg cube. What the hell is going on, folks?

This tale has just begun and we know that it will lead Picard to the stars on a new ship with a new crew – as well as some familiar faces dropping in. Overall, I thought episode 1 of Star Trek: Picard was on-point. There was a weariness to it early on, a weariness that Picard wore like a coat. But I think we see that the arrival of Dahj, and the discovery of Data’s influence, has energized our former captain. And that should be fun.