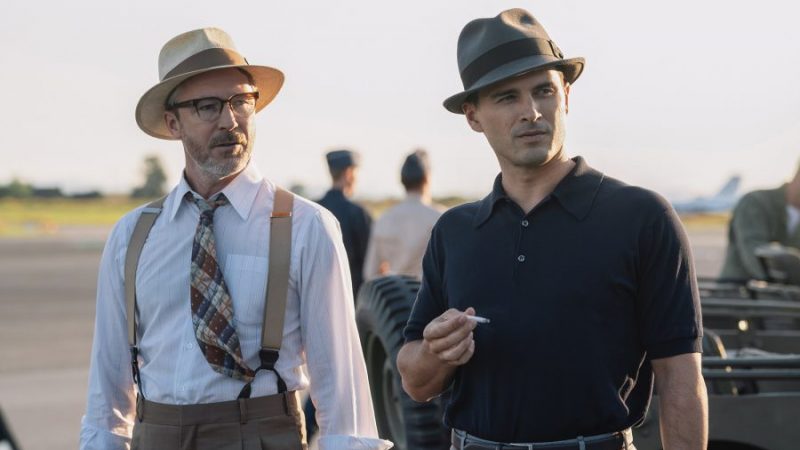 Season two of Project Blue Book takes us to ground zero of the extraterrestrial question – Rosewell, New Mexico. What a great way to open the second season of this fabulously interesting show on History Channel. But the trip to Roswell isn’t because of something new as much as it is about reminding General Harding of the past – and the unpleasant part he played in the original incident at Roswell.

Yes, episode 1 of Project Blue Book’s second season takes us to a place we’ve heard so much about and offers us a story that perhaps offers a few more details about what went on. I find that one of the things I most enjoy about this show is that they are taken directly from the case files of the real Dr. J. Allen Hynek. It lends an air of authenticity to what we’re seeing. Oh, I have no doubt that in the interest of storytelling the blur between fact and entertainment is quite expansive. Still, there’s a vibe to this show that offers a fun glimpse, no matter how small, into Hynek’s work – and the work of others around him to push their own agendas forward or simply hide the truth. 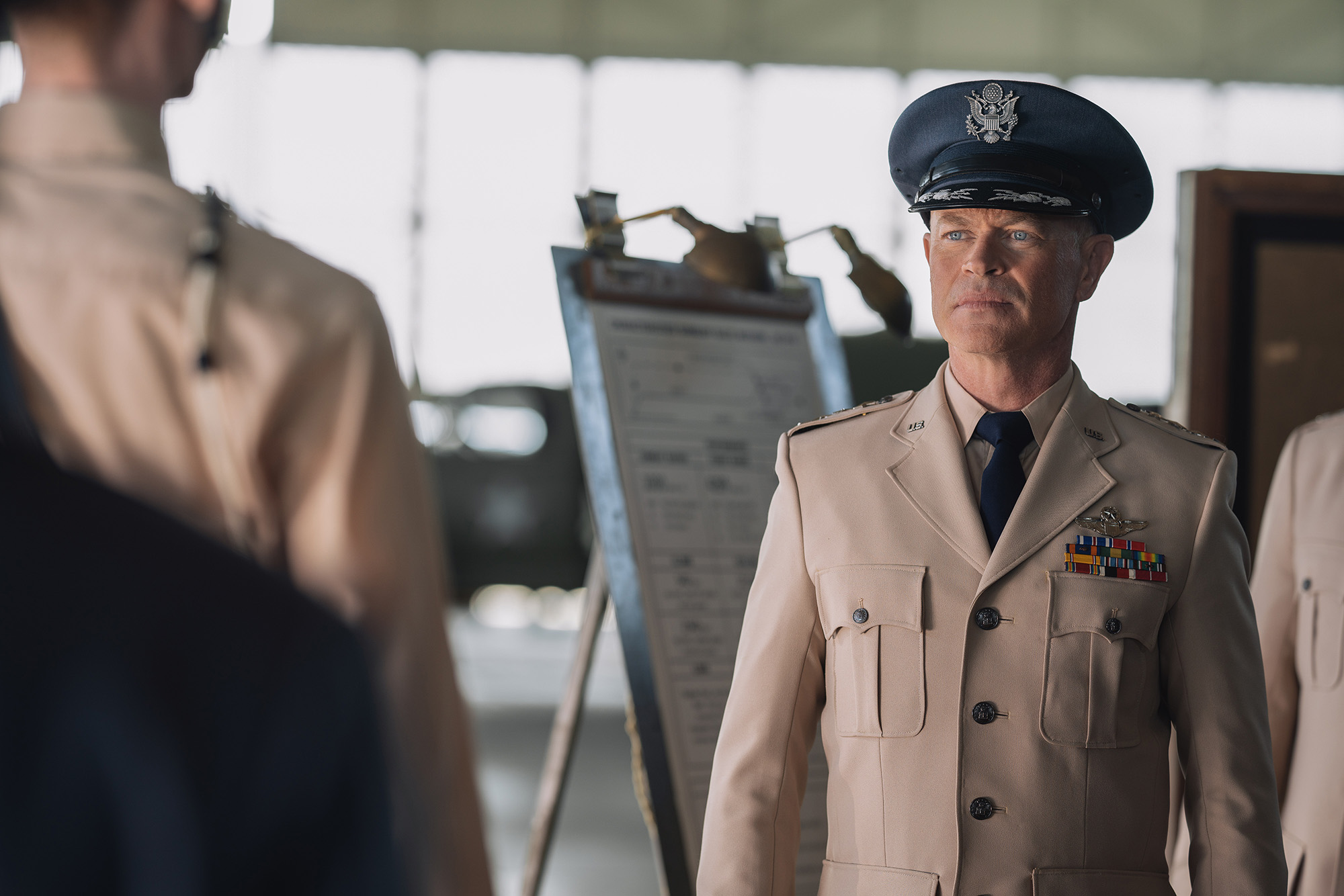 And that’s essentially the pot of stew that Hynek and Captain Quinn find themselves involved with in episode 1. As an aside, this is a two-part opener, so we are going to get our Roswell cup filled nicely over the next two weeks, something I’m delighted about. Let’s do Roswell, shall we? Quinn and Hynek find themselves in Roswell thanks to the many mysteries of Gen. James Harding, who happened to be the man who cleaned up the mess and terrorized the community in the aftermath of the original crash of 1947.

A late night phone call and later a note left in the desert next to a burning pile of tires tells us that Harding’s original visit to Roswell was not well-received. We learn there were payoffs, threats, physical harm and more than a little arm-twisting during the original crash. The memories of Harding’s efforts to put a lid on what really happened have lingered and someone wants him to know that all the secrets our good general took from and buried in Roswell are about to be exposed.

There’s a wonderful tension throughout this episode as Harding has to revisit the memories of what he did and to whom he did it. And for all the vibe he puts off as “doing his job” no matter how ugly, there’s a wonderful moment when he admits that the people of Roswell have suffered enough. It was a nice little glimpse behind the hardened curtain we so often see with Harding. Duty and country matters, but there’s a sliver of himself that understands what he did was draconian and hurt people. Still, he presses on, doesn’t he? 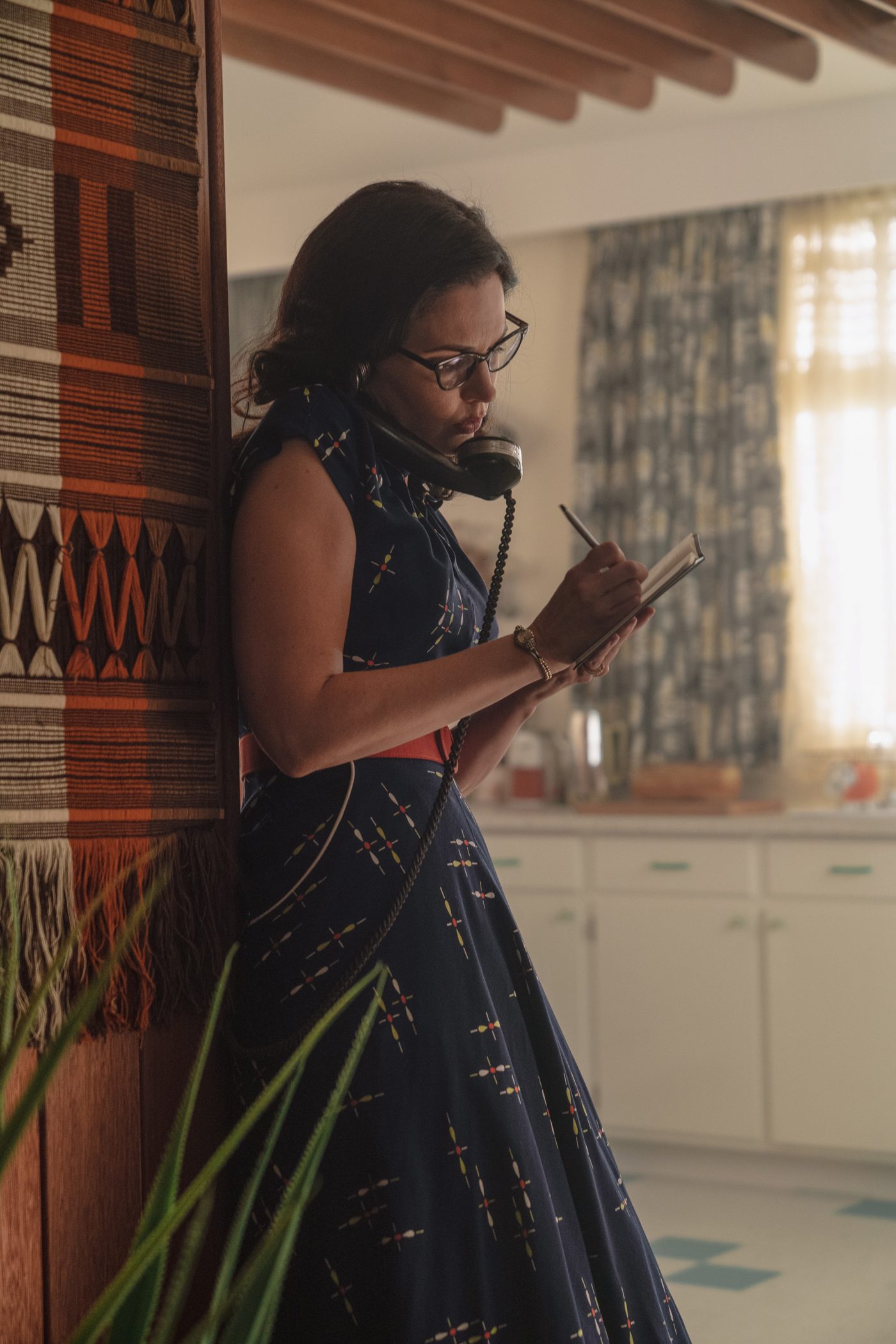 The job has to be done and Roswell is completely cut off from the outside world as Harding uses the same playbook that he unveiled in the aftermath of the 1947 crash. It’s interesting to note that such a thing could happen in America in the years after World War II, but it also provides a glimpse into the very real fear of the Communists and the extraterrestrial threat that seems so very real. Someone has called Harding to Roswell once again and Harding, Quinn and Hynek begin searching for answers – albeit in two very different ways. Payment and intimidation from Harding, questions and putting pieces together from Quinn and Hynek.

And from there, we meet some of the townsfolk, most of whom seem to have a very strong opinion of Harding and what went down in 1947. It’s interesting to see Hynek and Quinn working together as they do. For Hynek, the very real possibility that America has been, and is still being, visited by aliens is exciting and intriguing. Add in that he has become utterly convinced that Harding, and the U.S. Government, is covering up the visits and the physical evidence of those visits, and Hynek is surely a man on a mission. His intensity level, even in the opening episode of season 2, is turned up a notch. He wants answers, no matter where those answers lead.

Quinn, on the other hand, seems caught in the middle emotionally. When this all started his job was to shepherd Hynek to the correct answers that Harding desired. Funny thing, though, as season 1 went on, there was too much strange stuff going on to ignore or explain. In the season 2 opener, we see two levels of commitment to the truth. Hynek is totally laser-focused on uncovering the truth, while you can see Quinn starting to doubt the course they had charted at the end of season 1.  And throughout this episode, Quinn moves from side to side, struggling with his duty and loyalty to Harding while also realizing there is much that hasn’t been explained. 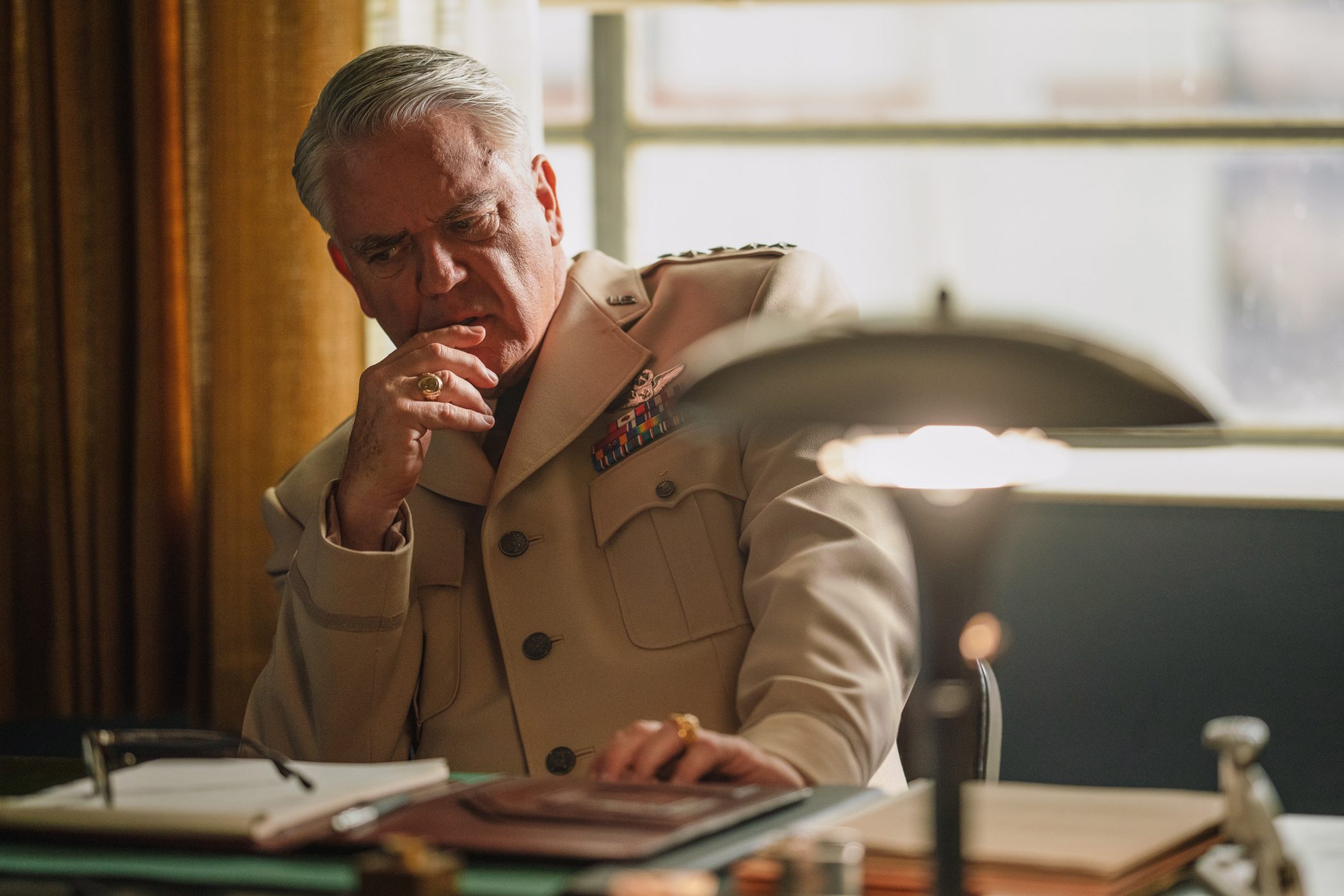 I like his struggle, I think it’s the kind of struggle an officer like him would have in the midst of this. So, Hynek keeps moving forward, Quinn straddles a line, and Harding deflects and obfuscates. It’s a fun dynamic between the three, one that bares plenty of interesting fruit in this opening episode. Aiden Gillen (Hynek), Michael Malarkey (Quinn) and Neil McDonough (Harding) are splendid together as always, with the push and pull of information creating a fun dynamic.

I thought one of the better moments was when, confronted by Hynek and Quinn after the roadblock shooting, Harding admits there was a cover-up. Of course he launches into a story about a very different kind of balloon test that was designed to measure Soviet nuclear testing data. It was a quick and pragmatic explanation and one that I could see caught Hynek and Quinn a little off-guard. Well played, Harding.

Fortunately, Hynek realized that the scope of cover-up and intimidation that was used were disproportionate to a simple balloon crash. The monitoring equipment would have been valuable, but why snatch up all the material. After all, it’s still just a balloon. Did you really think Harding was being honest? He’s a cool customer and a quick-thinking man who has had the visions of 1947 running around his head ever since. He’s the kind of man who has run these scenarios and questions through his mind countless times. Is it any wonder he was able to spit out a plausible story when confronted?

Quinn seems relieved by the story, but Hynek senses there’s more going on than that. By the second half of the episode, we get some really fun things going on. Hynek and Quinn just happen to get a few moments with the shooter I mentioned earlier. Turns out he was a military man back in ’47 and was posted as a guard at one of the crash sites. That’s right, he says there were actually two. Additionally, he admits to having orders to shoot anyone that didn’t belong there – and exercised that order on an alien life form. 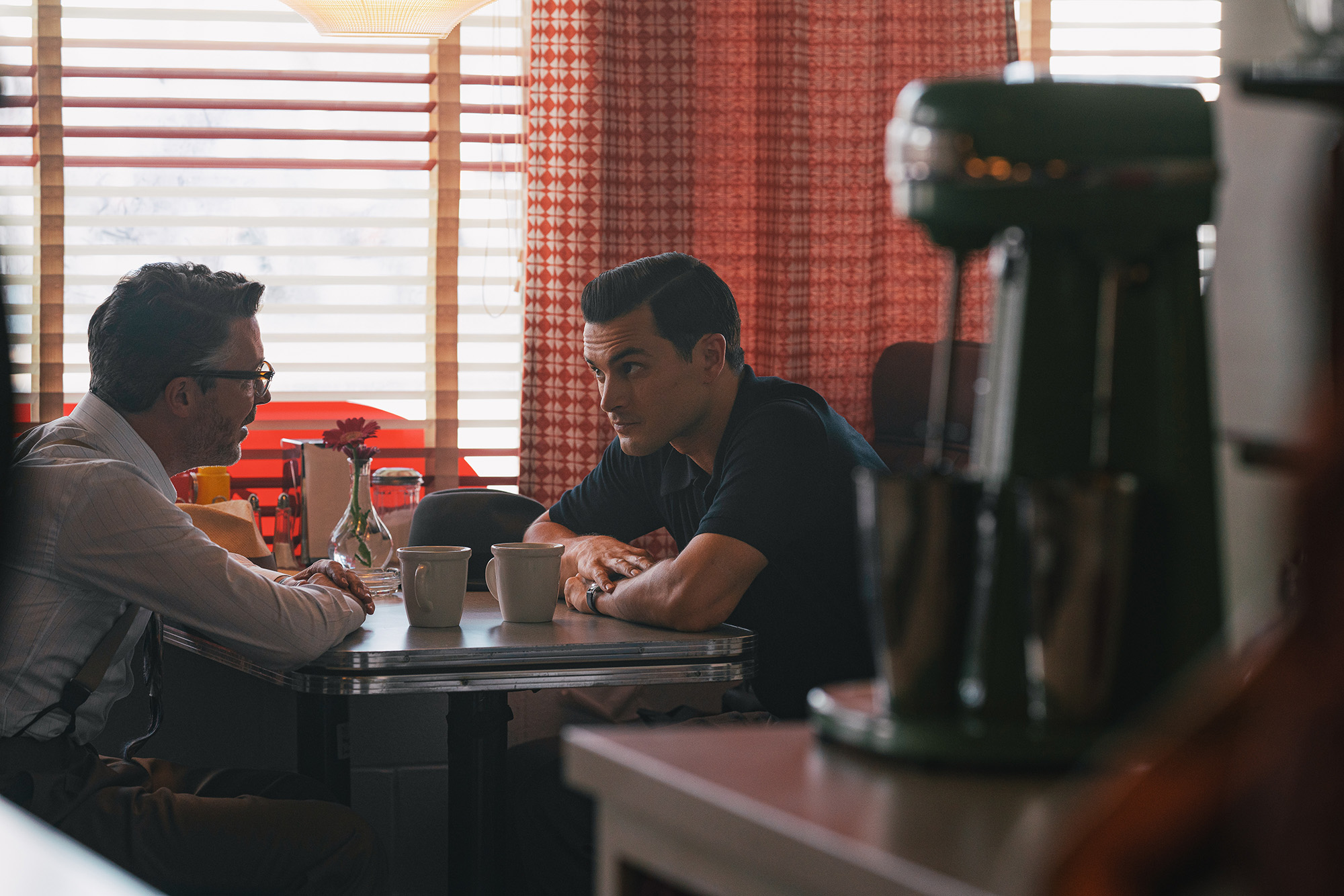 He further tells our two investigators that he came back later, retrieved the body of the alien and buried it on his property – and it’s still there? So we know where this is going – it won’t be long before Hynek and Quinn have shovels in hand and go after that body. That should be interesting.

We also see that the good doctor has been enlisting his lovely wife Mimi (superbly played by Laura Menell) in a bit of espionage to fill out some of the blank spots in the “alien visitors” manifest. Mimi, complete with a fake name, has worked her way into the Citizens for Saucer Studies: Ohio Chapter, a group that talks alien encounters. “Betty” stops by after one of the meetings to have a word with Evan, who leads this chapter.

So it seems that with all the cloak and dagger that goes on with Harding, our good Dr. Hynek has learned a few things and his wife Mimi (Betty) is serving as his operative. She gets Evan to hand over a thick notebook of info on the Roswell incident of 1947 and helps tie some loose ends together in Hynek’s investigation, including some other names to track down. 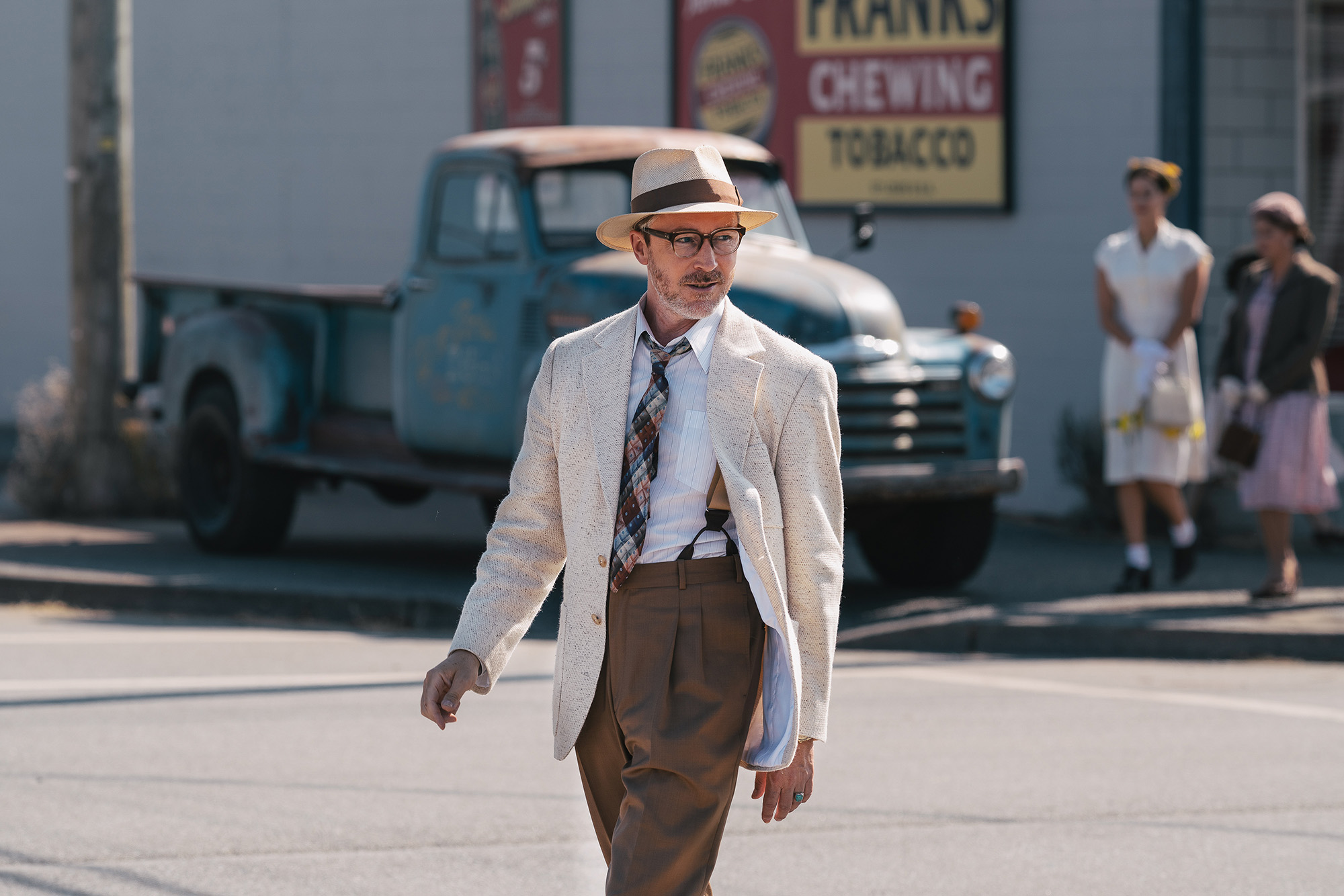 For me, the introduction of Mimi as a Project Blue Book inside source is delightful. She seems to enjoy helping her husband in his work and, I think, he enjoys having her as a full partner in what’s going on. Unfortunately, another woman in the group recognizes “Betty” for who she is. And who should show up at Mimi’s door a little later but Evan. He has put two and two together and now he’s excited. He’s got a potential source inside Project Blue Book itself. You can practically feel Evan’s nerdy, alien-loving heart beating with joy.

So, we shall see where that leads. Evan isn’t a bad guy and merely proposes a trade of information between he and Mimi. I suspect Mimi will go for that as she’s got a curiosity streak a mile wide, too. Even as our doctor its putting pieces together, it would seem that Mimi and Evan are on a different course to see if they can discover their own truth about Roswell and the government’s machinations.

I like this pairing and I like the thought of Mimi and Evan adding to the storehouse of knowledge that Dr. Hynek will work with. Let’s hope it doesn’t blow up in everyone’s faces. I worry that Evan may not be able to keep a lid on his enthusiasm. And that could lead to issues. 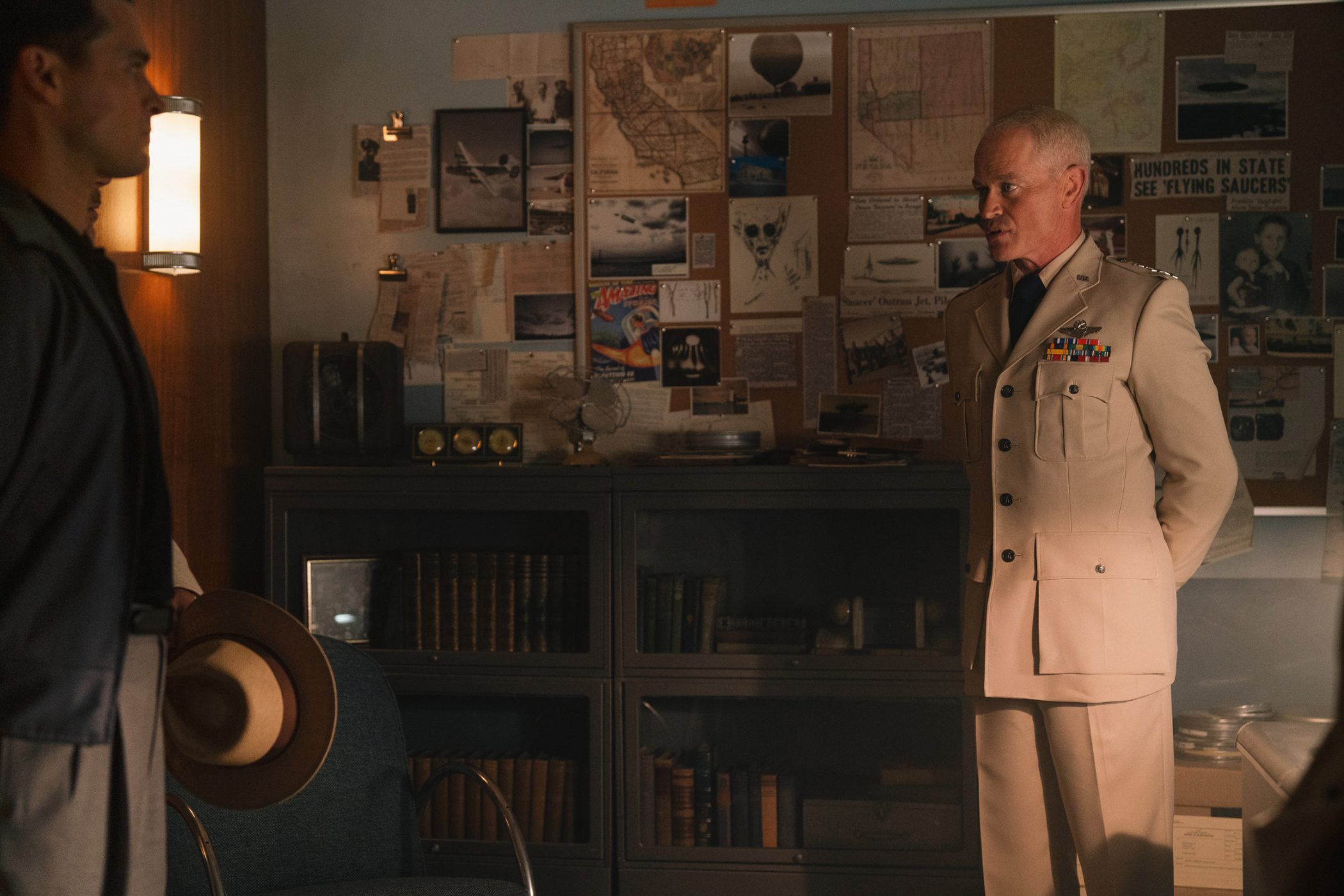 So, we’ve got the pressure-cooker of Roswell, New Mexico and its past coming to life again, a threat to expose Harding and his secrets from Roswell hanging in the air, Quinn and Dr. Hynek trying to piece stories and events together into a coherent story, and someone suddenly dumps a homemade spaceship into the street of Roswell. Talk about a message being sent. Looks like we already met our spaceship maker earlier, so I’m sure that’s where the investigation of all this will begin in episode 2.

For now, I thought episode 201 was a very nice run into the new season. And basing it in Roswell, the home field of alien cover-up activity, was a master stroke from a storytelling standpoint. What a great way to kick off the new season and not only get Dr. Hynek and Quinn re-established as ET investigators, but also gave us a little more backstory on Gen. Harding and how he fits into all of what Project Blue Book is supposed to be. Let’s see how it plays out in episode 202.